Ojiako is the third Tech player to put his name in the portal this offseason. Jalen Haynes did so in March, while Nahiem Alleyne did so on Tuesday morning.

A 6’10” junior from Lagos, Nigeria, Ojiako was part of Mike Young’s first recruiting class in Blacksburg in June 2019. He played high school ball at Admiral Farragut Academy in St. Petersburg, Fla. Ojiako played in 57 career games with the Hokies, starting two. He averaged 2.4 points per game while shooting 54.6% from the floor.

Ojiako appeared in just six games in 2020-21 and missed the first nine games of the year with a knee injury. He was much more active in his freshman and junior seasons, appearing in 31 and 20 games, respectively. He scored a career-high 15 points in Dec. 2019 vs. Maryland Eastern Shore. Ojiako posted a career-high nine rebounds twice, vs. Gardner-Webb in Dec. 2019 and vs. Pitt in Feb. 2020.

As a freshman, Ojiako was the tallest player on Tech’s roster and saw plenty of playing time. However, as Keve Aluma (6’9″) and Justyn Mutts (6’7″) came into the fold, coinciding with his injury, his appearances decreased. Ojiako played in nine of Tech’s 20 regular season ACC games this year and saw time in the ACC Tournament.

His departure, combined with that of Alleyne, means Virginia Tech has two open scholarships heading into 2022-23. Essentially, two other scholarships are behind held for the duo of Mutts and Aluma in case they choose to come back.

Mutts declared for the draft but also retained his eligibility on Monday, while Aluma has yet to make a decision. If the two decide not to return, the Hokies will have four open roster spots. If one stays and the other goes, there will be three spots. Both have to make a decision by June 1.

Here’s a scholarship breakdown by class for Virginia Tech as it currently stands. 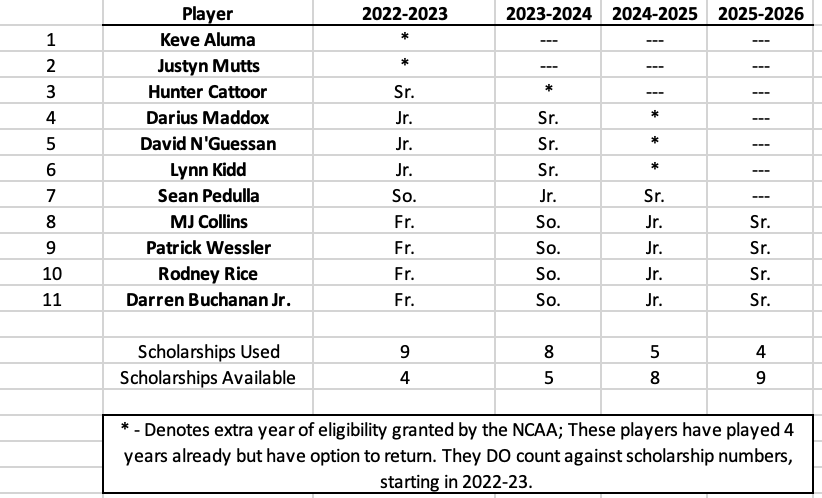