No. 5 Virginia Tech travels to Pittsburgh this weekend to play the Panthers in a three-game series.

The matchup features two teams heading the opposite direction. The Hokies (23-3) have won 12 games in a row, while the Panthers have dropped eight of their last 11.

But the Panthers haven’t been able to use that win as a springboard. Instead, they’ve dropped their last five games, most recently a three-game series at home to Notre Dame with scores of 7-5, 11-0 (five innings), and 8-2.

The Hokies, on the other hand, remain on a blistering pace. They’ve outscored their opponents 104-14 during their current winning streak and are coming off a doubleheader sweep of Longwood in which pitchers Emma Lemley and Ivy Rosenberry both threw no-hitters.

Here’s the schedule for the weekend:

The weather looks problematic with chilly temperatures (high for Friday and Saturday is mid-40s, high of 35 on Sunday) and showers forecasted for Saturday.

Pittsburgh is No. 15 in the NCAA in strength of schedule. But with the exception of FSU, they have not been able to break through with victories. Outside of the Tallahassee victory, their best wins have come against Kansas (3-2), South Carolina Upstate (2-1), and Missouri State (4-1).

Pittsburgh finished 11th in the ACC last season and was picked to duplicate that feat this year in the preseason poll. The Panthers will host the ACC tournament in May so they certainly would like to finish in the top eight of the league to participate.

At the plate, the Panthers are led by sophomore Cami Compson (.343, 5 HRs) who was an All-ACC Freshmen Team performer last season when she hit .325. Freshman Haylie Bruson (.306) is the only other batter hitting over .300, but has only one hit in her last five games (1-for-15). Senior Yvonne Whaley (.289), a transfer from Texas Tech, has been holding down the leadoff role.

Jodi Hermanek is in her fourth season as the head coach, having come to Pittsburgh from Ohio back in 2018. Her overall record with the Panthers is 49-94. She replaced Holly Aprile, who led the Panthers to their only NCAA appearance in 2015 and was named the 2018 ACC Coach of the Year before leaving for Louisville.

On paper, the Hokies seem to have the advantage, but as Coach D’Amour likes to say, “there is talent on every roster of teams that we play in conference.”

“Regardless of who we play, our approach cannot change. We have to prepare the same for every game that we play.”

Below is the tale of the tape and individual stats. 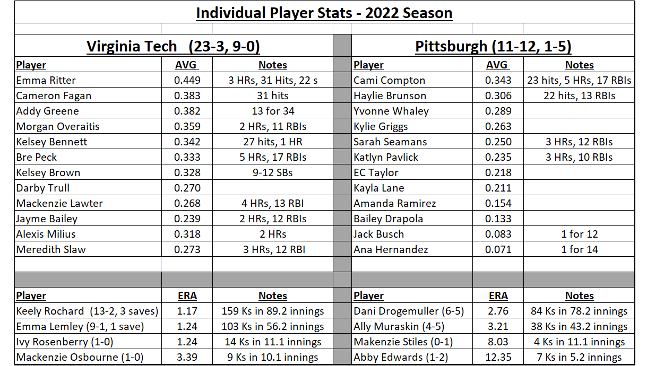