With his second national title on the line, No. 2 Mekhi Lewis of Virginia Tech knelt into the bottom position and exploded off the whistle in the second half of overtime.

Lewis needed to escape the grasp on Penn State’s No. 1 Carter Starocci in order to have a chance to win the championship at 174 pounds.

After having his six seconds of riding time erased from Starocci driving him out of bounds, Lewis knew he needed an escape and a takedown to have a shot.

The All-American cracked through Starocci’s clasped hands with nine seconds to wrestle and tried to roll through for a reversal but was unsuccessful.

By the time he got to his feet, Lewis only had enough time for a half-hearted shot before the final buzzer sounded, losing to Starocci 6-5 via riding time.

Lewis’ championship loss stung, but his second-place finish was a pretty remarkable comeback story given his injury that barred him from fully competing in last year’s national tournament and personal issues that nearly led to him quitting in the middle of this season.

His journey through doubt and adversity represented a common theme throughout the tournament for Virginia Tech.

No. 11 Bryce Andonian, following a tough loss in the ACC championship match, earned All-American honors and third place at 149 pounds after going 5-1 in the tournament.

Andonian’s run included a win against Appalachian State’s No. 6 Ryan Millner as well as a pair of victories against Wisconsin’s No. 3 Austin Gomez, pinning him in their first bout.

The third-place finish was the best of Andonian’s NCAA career and particularly impressive given the fact he entered the tournament as the 11-seed.

No. 4 Korbin Myers joined Andonian and Lewis as an All-American, earning the status for the second time in his career after racking up four wins in the tournament.

Myers rallied after an uncharacteristic major decision loss to Iowa’s No. 5 Austin DeSanto in the quarterfinals, stringing together a pair of wins in the consolation tournament to finish sixth at 133 pounds.

No. 25 Sam Latona finished 2-2 in his second career NCAA tournament, getting pinned by Michigan’s eventual national champion No. 1 Nick Suriano at 125 pounds. Latona’s low-seed — the result of a rocky start to the season in which he went 4-6 — handed him the Suriano matchup early into the tournament.

The only other Hokie to finish .500 in the tournament was No. 10 Nathan Traxler. His tournament ended in the consolation round of eight after receiving his second loss of the weekend — matching the number of defeats he had in the entire regular season.

Traxler’s 2-2 outing was a disappointing finish to an otherwise impressive collegiate career — one that included two conference championships, including his ACC title he earned at heavyweight two weeks ago.

No. 15 Hunter Bolen had a similarly underwhelming NCAA run to cap his VT career, going 1-2 in the tournament following losses to Penn State’s No. 2 Aaron Brooks and Missouri’s No. 17 Jeremiah Kent.

Bolen’s exit in the consolation round of sixteen was a dropoff from his last two tournament runs, two All-American finishes.

No. 28 Connor Brady faced a tough draw in the first round of the tournament, going head-to-head with Princeton’s eventual runner-up at 157 pounds, No. 5 Quincy Monday. Brady offered a good effort against the All-American, though, narrowly losing 3-2.

Brady took down Michigan State’s No. 21 Chase Saldate in the first consolation round of 16, but was knocked out in the following round by The Citadel’s No. 22 Dazjon Castro.

Only wrestling in two matches, No. 28 Collin Gerardi didn’t register a win in Detroit. The red-shirt junior suffered losses to Northern Colorado’s No. 5 Andrew Alirez and North Dakota State’s No. 21 Dylan Droegemueller.

Virginia Tech finished eighth in team standings with 52.5 points — a respectable finish considering VT only sent eight wrestlers to the tournament. Penn State ran away with the national title with 131.5 total team points.

The Hokies will soon turn their attention to next year, and they’ll have a few new faces.

Myers (133), Bolen (184) and Traxler (285 – HWT) are all graduating, but No. 1 incoming recruit TJ Stewart should slide into Bolen’s spot. Latona is expected to possibly move up to 133 pounds while sophomore Hunter Cakta will likely take the reins at heavyweight. 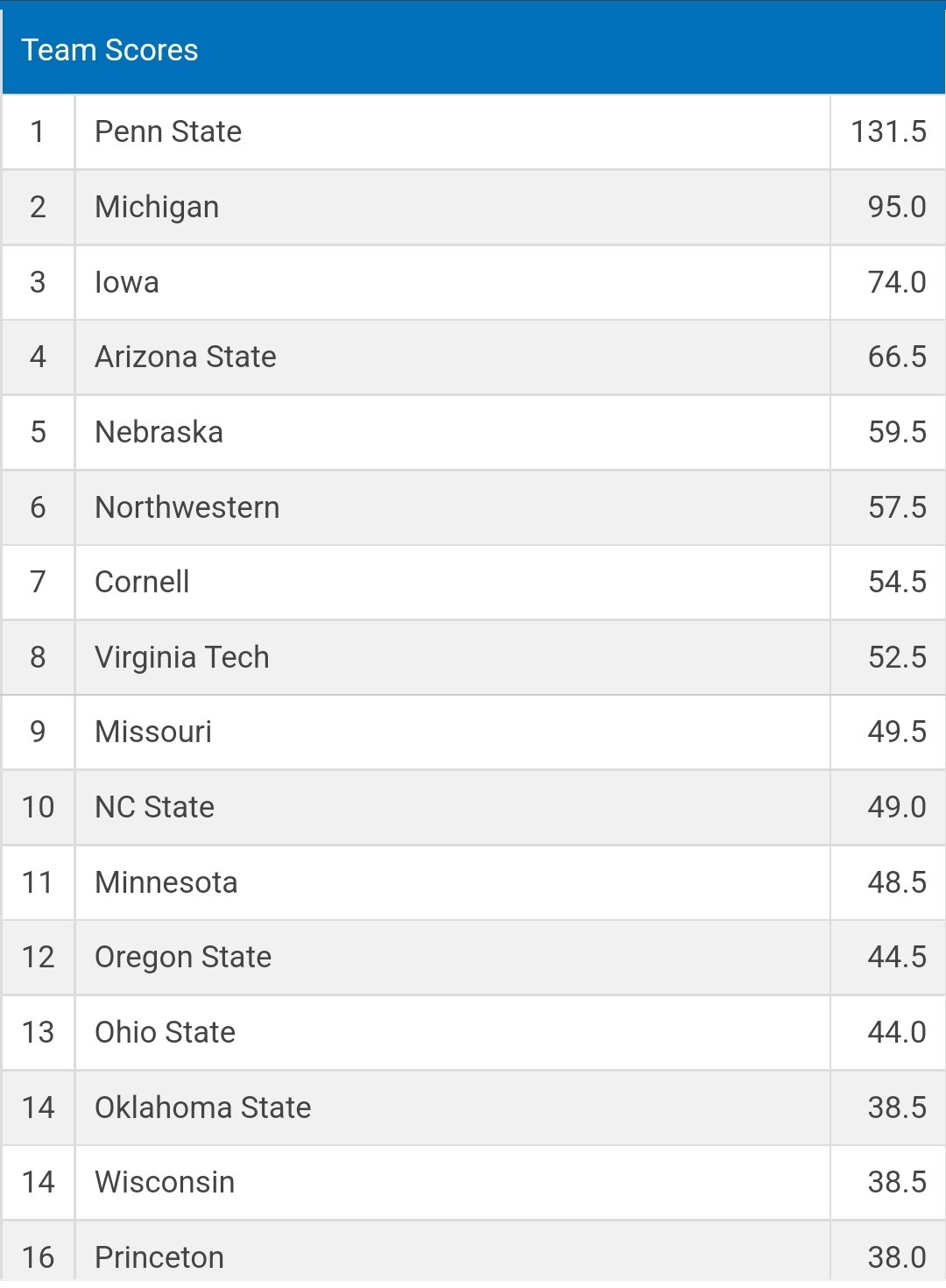