Coming off a week where the offense scored 45 runs in four games, the No. 5 Virginia Tech hosts North Carolina in a three-game series.

Friday’s game is set for 5 p.m. ET and will be shown on the ACC Network. Saturday’s game is scheduled for 2 p.m., while Sunday’s contest is at noon. The latter two games will be televised by ACC Network Extra.

North Carolina has been Virginia Tech’s kryptonite in recent years, winning 10 of the last 12 games from the Hokies. During their last trip to Blacksburg (2019), the Tar Heels handed Tech its only ACC series loss of the season, winning two of the three games.  The Hokies’ sole win that weekend was a two-hit shutout by a then-sophomore Keely Rochard.

That was also the last year the Tar Heels made the NCAA Tournament as they went 10-14 in the COVID shortened 2020 season and 14-26 in 2021 (10-19 in the ACC). This season, UNC was picked by the league coaches to finish eighth in the conference.

Their best wins of the season came in victories over South Carolina (8-3), Virginia (5-0) and Liberty on Wednesday (3-2).

The Tar Heels return four of their top-five hitters from 2021 and three of them are among the team’s top hitters this season: Bri Stubbs (.364, who bats leadoff), Kiannah Pierce (.350) and Taylor Greene (.290).

UNC also added JMU transfer Sara Jubas (.338), the Dukes’ leading hitter last season. Sophomore Skyler Brooks (.355) has moved up to second in the batting order while holding down second base.

This UNC team does not appear to have a lot of power, ranking last in the ACC in both home runs (eight) and slugging percentage (.366).

George, who was named to the All-ACC Freshman Team in 2019, has had two dramatically different seasons thus far.

Backers had her best game of the season Wednesday at Liberty, limiting the Flames to six hits and two runs while striking out seven,

Carolina head coach Donna J. Papa is in her 37th season at the helm of the Tar Heels. Papa has a career record of 1290-749-5 (.632) at UNC and currently has the third-most career-wins of any active coach in the NCAA. During her time with the Tar Heels, she’s led the team to 15 NCAA Tournament berths.

“We’re looking forward to playing another quality opponent this weekend,” Virginia Tech head coach Pete D’Amour said. “There aren’t any off weekends in the ACC this year. There is talent on every roster of teams that we play in conference. Regardless of who we play, our approach cannot change. We have to prepare the same for every game that we play.”

Below are the tale of the tape and individual stats. 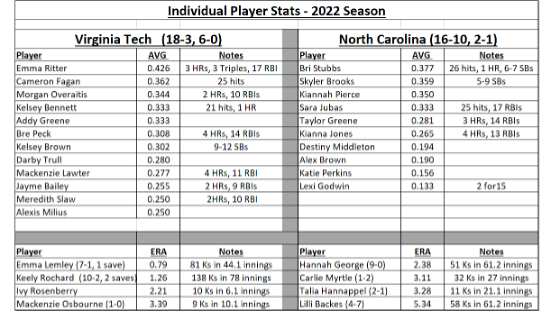