March 29, 1995. Before this March, that was the last time Virginia Tech had played in the final of a postseason tournament.

The opponent was Marquette, the setting the NIT Championship in Madison Square Garden in New York, N.Y.

In the Barclays Center in Brooklyn, just a 25-minute subway ride from the legendary Manhattan arena, the Hokies dominated North Carolina in their 72-59 ACC Tournament semifinal victory on Friday, their first-ever win in that round of the contest in four tries.

It’s the school’s first time in a final of a postseason tournament since, well, it beat the Golden Eagles 65-64 in that overtime game behind two clutch free throws in the final 0.7 seconds from Shawn Smith.

The Hokies just seem to make big-time plays in the Big Apple.

“Man, we had an edge to us all night defensively,” Virginia Tech head coach Mike Young said after the win. “We had a good pop. … We weren’t bad offensively, but we weren’t great. … But I thought our defense really carried us.

“I thought we made a couple of shots, but our defense carried us in that 9-0 run to get some separation and make a little hay.”

The stretch to which Young refers came in the mid-way point in the second half. Leading by 20, North Carolina fought back. Regression to the mean is normal, and it was bound to happen with UNC’s shooting considering the Tar Heels were 13-of-36 (36%) prior.

But like a lighthouse isolated on a rocky coast in the middle of a hurricane, the Hokies stuck together. They, like so many times in this stretch of 12 wins in 14 opportunities, weathered the storm.

In that three-minute span, Tech missed all five of its field goal attempts. But Justyn Mutts, its do-it-all fifth-year senior forward, came in clutch.

He laid in a difficult hook shot that stopped the bleeding and gave Tech a 13-point lead, and the game was never closer than that again. Darius Maddox knocked down a three and got fouled on the next possession, and Carolina couldn’t catch the Hokies.

“He just seemed to maneuver himself – and he does an unbelievable job of lowering his center of gravity,” Young said of Mutts. “And he’s strong as an ox, his lower body. And rooting that defender down underneath the charge circle and getting over him, right shoulder, left shoulder.

“Maybe the shot of the game, kind of got us righted, got us going in the proper direction again.”

One of Mutts’s veteran counterparts, Storm Murphy, was crucial down the stretch, too.

The Middleton, Wis. native played for Young and alongside Keve Aluma at Wofford, and he took on a new challenge at the beginning of the season coming to Blacksburg. He hasn’t always been perfect, but against North Carolina, he was a quiet, calm maestro.

With less five minutes to go, UNC really started to put pressure on VT. Mutts turned it over twice, once which came against the press, and it looked like all Carolina needed was a spark.

Instead, Murphy, who finished with seven points and seven assists, stepped up. And not in an extremely noticeable way either. Simply catching the inbounds pass, helping break the press and controlling the overall flow of the game.

The mantle of being the calm, casual veteran has frequently been favored by Mutts throughout the season. But his play is much more noticeable than Murphy’s. By simply dribbling past Armando Bacot to break a full-court trap, Murphy gave Tech a chance to continue to play well.

Freshman point guard Sean Pedulla looked like a rookie at times out there. In fact, he almost got tied up in front of the UNC bench. But boy, did Murphy’s presence settle his team down.

“He’s sharp,” Young said of Murphy. “[He] knows how things are supposed to play out. He’s been in that situation a number of times, maybe not in the Atlantic Coast Conference tournament, but great comfort with him in the backcourt with him with the ball in his hands.”

UNC shot 37% from the field, 12% (3-of-26) from three. Darius Maddox scored a career-high 20 points and made four-of-five shots from distance. The bench outscored the Tar Heels 30-6. Crucial buckets, whether they came from Aluma, who had 18 points, or one of the other seven players, helped.

Young also opted, at times, for a four-guard lineup that put Carolina’s defense in uncomfortable situations. All of that came together and helped Tech run away with the game. 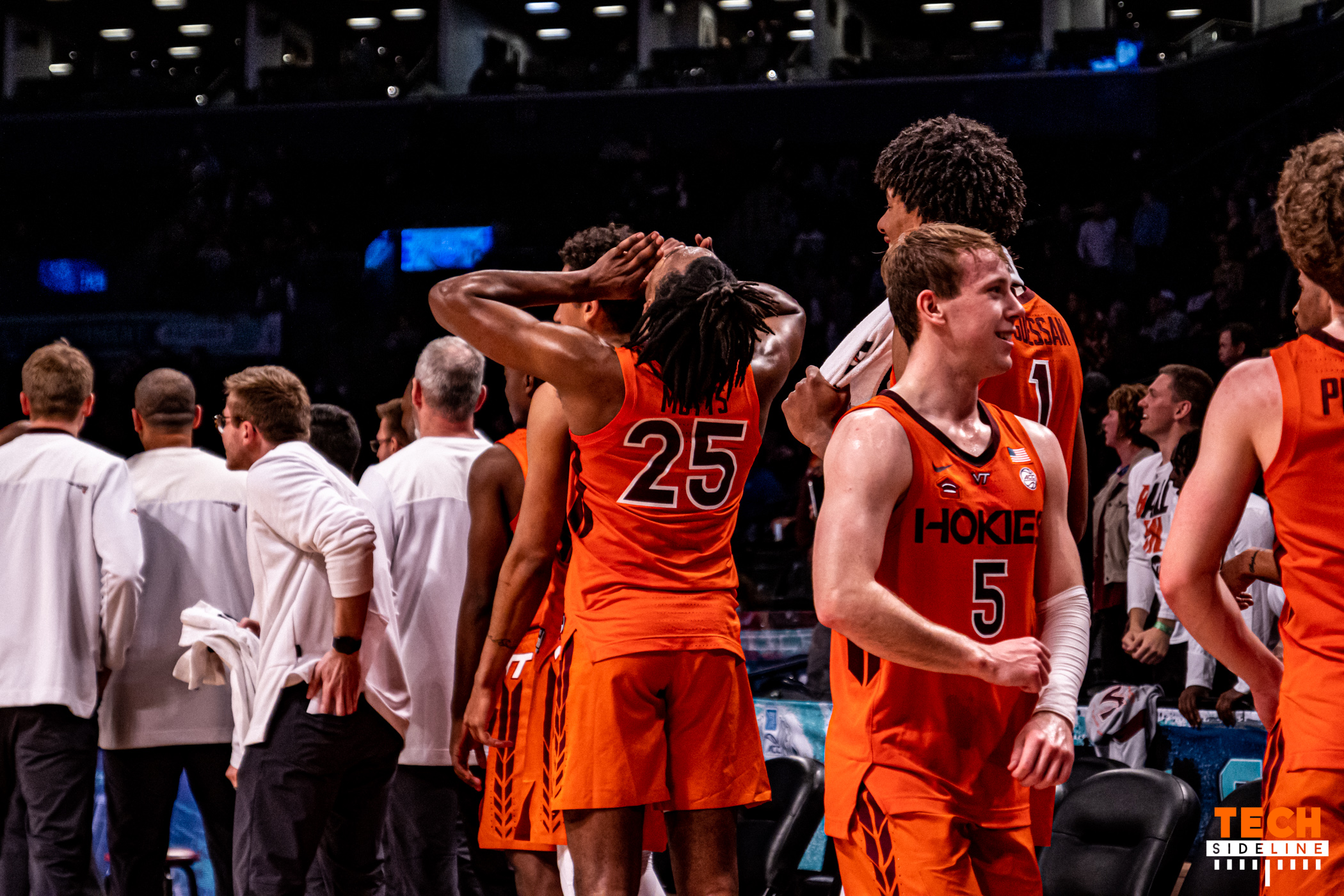 “Didn’t like it [before the game],” Young said of his guard-heavy approach. “Then the doggoned thing worked so well. They had a hard time matching Brady [Manek] on a guard. I think they went with Puff Johnson, with a smaller lineup. The ball was moving.”

Young said his squad didn’t alter anything at all from the previous two matchups with the Tar Heels. The Hokies just played better.

That’s been their mantra in March. They’re just out-playing teams in all aspects. The ACC Tournament semifinal was an example of that, and Tech has a chance to make history on Saturday against Mike Krzyzewski & Co.

The NCAA Tournament bubble still looms large like a dark cloud over the Hokies’ head, but they aren’t stopping to think about it. They’re playing with desperocity, Mutts’s phrase coined back at the start of this mid-season journey when he tried to reference being desperate. They’ve been in that mindset for some time.

“I think just because we’re desperate doesn’t mean we’re not confident,” Aluma said. “Everybody in the locker room works hard and is in the gym, and I think everybody is super confident. We just know we’ve got to win.”

Back on Jan. 26 after losing to Miami and falling to 2-7 in the league, Young told his players “This thing’s going to turn.” He always said when Tech started playing like it should, it would be a thing of beauty.

It’s highly unlikely anyone expected this, but Young knew all along. And now Virginia Tech is in the ACC Tournament final.