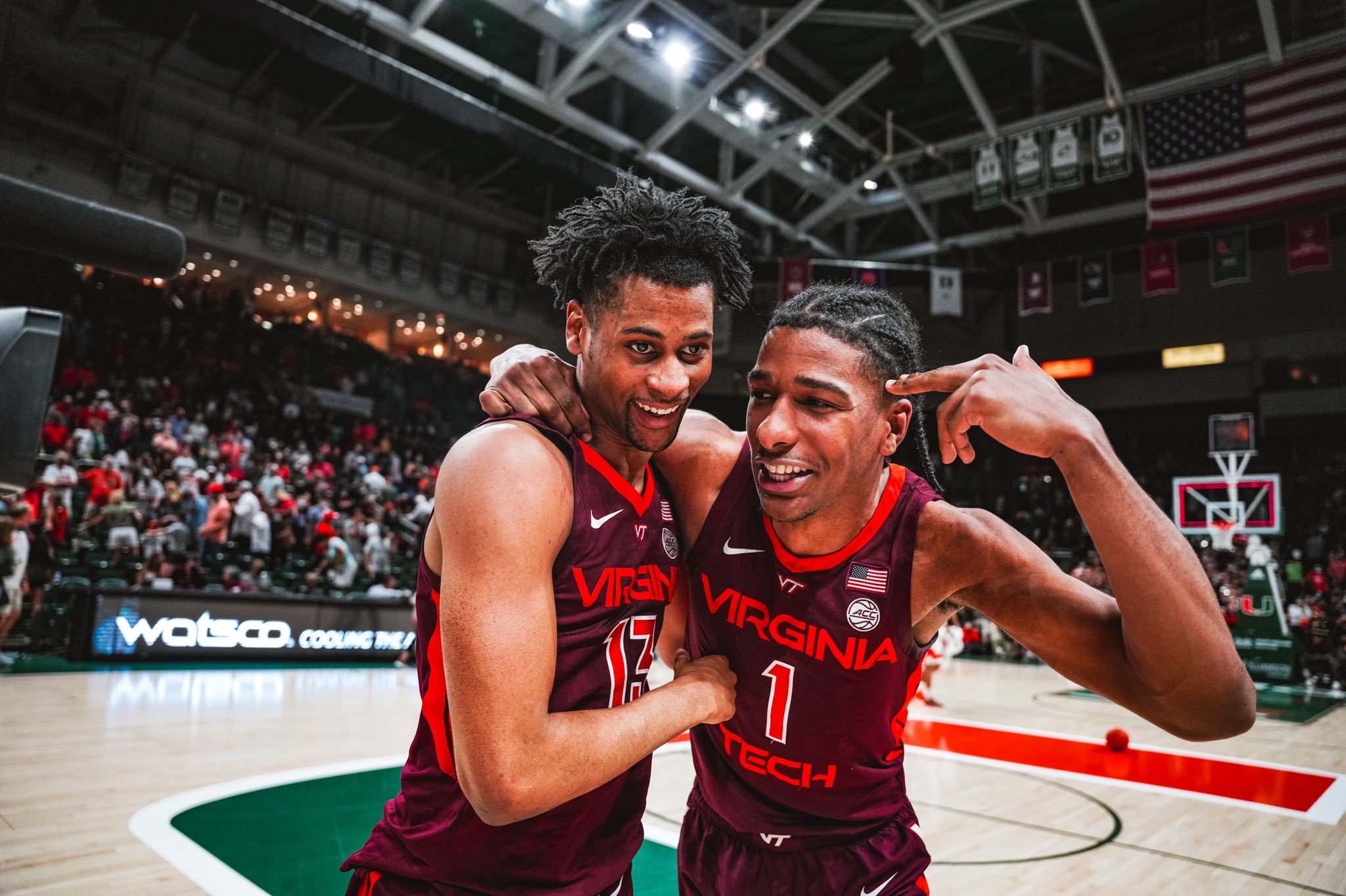 Trailing by eight with 1:42 remaining in the Watsco Center, Virginia Tech could’ve let its game at Miami end like so many others this season.

A close contest with five minutes to go, the Hokies couldn’t make enough plays down the stretch to win. Shades of Virginia, NC State, North Carolina, Boston College and meeting No. 1 with Miami. But Sean Pedulla and Darius Maddox had other ideas.

Instead, Tech fought back. Mike Young’s team forced two turnovers and made five-of-six shots in the final 92 seconds, none bigger than Maddox’s trey with 14.6 seconds left. The play started with Cattoor tipping an inbound pass after Pedulla made a contested layup that cut the deficit to two.

The ball fell right to Maddox, who said he didn’t know how much time was on the clock or what the score was. He just knew the Hokies needed a basket. And get one they did.

“We were desperate,” Maddox said on his game-winning shot. “I feel confident in the way I’m shooting, just staying aggressive, and every shot I take I feel is good.”

“We’ve come a long way, haven’t we?” Young joked. “I want him [Maddox] to shoot it more. Every time he shoots the ball,… the thing’s going in the basket. And he’s shooting at an incredible clip. That’s a huge shot. That kid rises up and bangs that thing home.”

The win wasn’t pretty. But basketball games in February and March don’t need to be, as long as the final score is in the right favor.

Amazingly, the Hokies had season-highs in turnovers (19) and assists (21) in the same game. The giveaways were killer: Miami scored 25 points (36% of their total points) off Tech mistakes, and just turned the ball over nine times itself. Seven came in the second half, and two were in the final two minutes, including the one that led to Maddox’s shot.

For the longest time, it looked like the turnovers would doom the Hokies. They had 16 at the under-eight media timeout and the 18th came at the four-minute mark. But after that, they only turned the ball over once more.

“I haven’t had a team turn the ball over 18 times. I’m not sure if that’s happened in my career. You can’t win that game. … Great level of resolve. Hung in there, wasn’t always pretty. Frustrating, just not great basketball from us.” 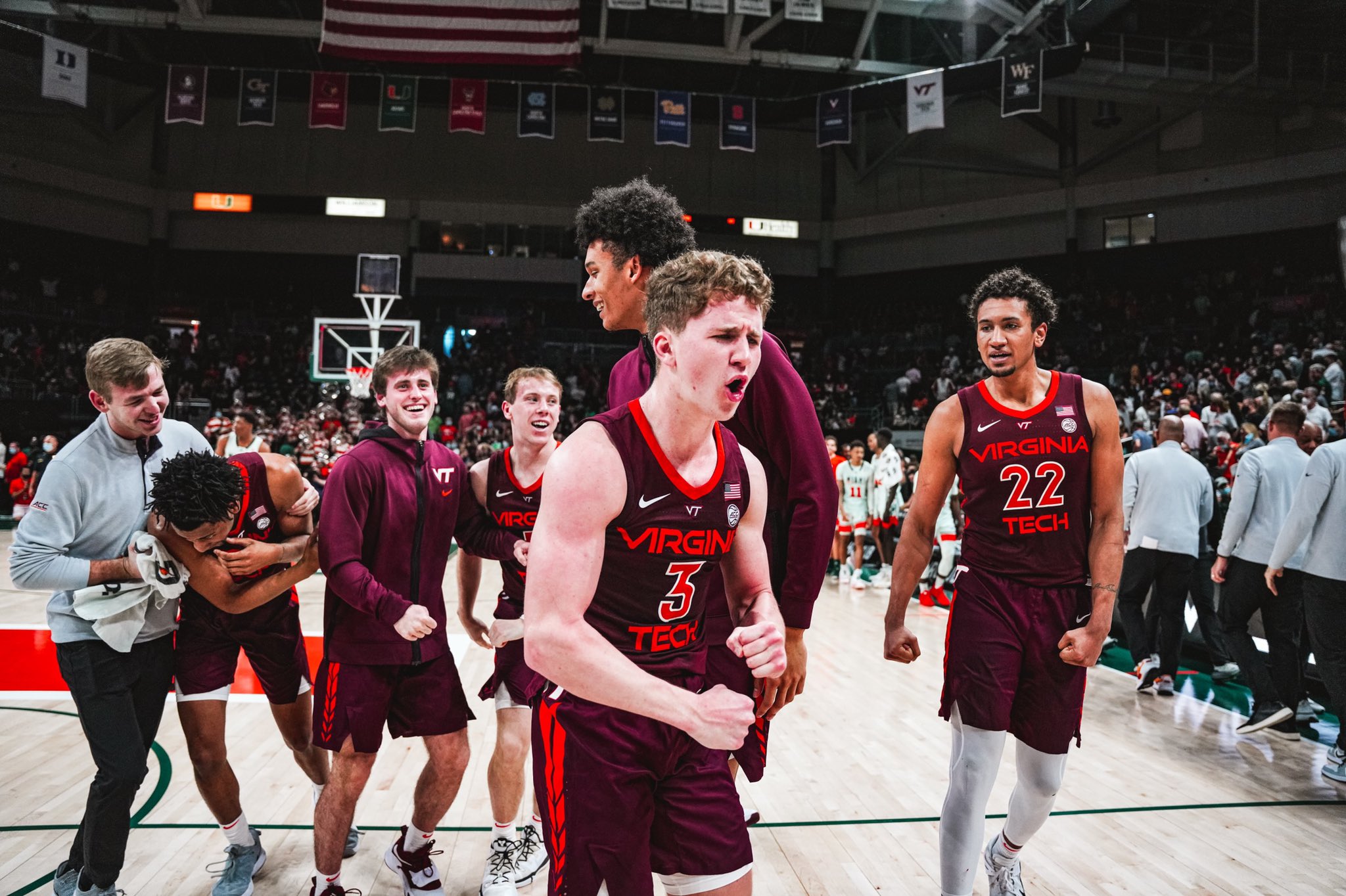 However, when the ball wasn’t being handed to the Hurricanes, Tech was good offensively. 21 assists on 29 made field goals, 56.9% from the floor and 81.5% (22-of-27) on 2-point shots. The threes didn’t exactly fall at a consistent rate – VT has hit eight or fewer treys in five straight games now – but the clip was much better in the second half.

That was combined with better defense, too. Sure, the Canes shot a 50% clip for the game, but after making 11-of-19 shots to start the second half, they were 3-of-8 over the last seven minutes.

“Next best action,” Young said. “You don’t see anyone on this team getting their shoulders down, droopy. Our team does have respect for those three guards and Miller and Waardenburg. They do it against most everyone. Just hard to match up with.

“But again, I go back to the camaraderie and the teamwork, togetherness of this team. They like playing with one another and have great trust in one another.”

Tech was better in many areas, and rebounding was one of them. It held a 31-21 margin on the glass over Miami, led by Keve Aluma’s ten boards.

He finished with sixth double-double of the season, pacing Virginia Tech with 18 points, while Pedulla (17) and Maddox (13) gave the Hokies 30 points off the bench. Five Miami players scored in double figures, led by Kameron McGusty’s 15. Isaiah Wong added 14, while Charlie Moore had 12.

But the Hokies had enough in the tank to overcome the turnovers. Back against the wall, they finished the game on a 12-3 run. Justyn Mutts mentioned the team being desperate after the Virginia game 12 days ago, and the players showed that in the late stages of the game in Coral Gables on Saturday.

Tech’s season wouldn’t be over had it lost, but the odds would’ve been even more against Young & Co. Instead, they’re still on the bubble, now with a precious Quadrant 1 win, and they have momentum heading into the final two games of the regular season.

“Let’s play well on Tuesday against Louisville,” Young said. “We’ve still got work to do. Let’s win tomorrow. … If we keep winning, I think that’ll bode well for the Hokies.”