In the first trip to the Dean E. Smith Center under Mike Young, Virginia Tech out-shot North Carolina. But after trailing by double digits early, the Hokies battled back but fell short, 78-68.

ACC Player of the Year candidate Armando Bacot was superb, pulling down 20 rebounds, eight on the offensive glass. 20 is the most rebounds by an opposing player against the Hokies in ACC play since Tech joined the league in 2004. The previous high was 19, set by Duke’s Shelden Williams in Durham on Dec. 4, 2005.

Editors Note: On Tuesday morning, North Carolina made a statistical correction that gave Bacot a defensive rebound that was originally given to RJ Davis. He previously had 19, but that number was changed to 20.

“Any time you play North Carolina, your team knows their team,” Young said afterwards, “and the first two things I could’ve asked any of them prior to beginning our preparations, and they would immediately say, ‘transition defense,’ which I thought we were terrific, and … you’ve got to rebound the ball.

“My team gave me everything they had. We had excellent rebounding from our backcourt. [Nahiem] Alleyne had five. Hunter Cattoor had seven. … We’ve got to do a better job. Bacot is a house. Everybody in this league has a hard time keeping him off the glass.”

Indeed, Bacot put on a show. To go along with his rebounds, he had 14 points. Though after he started a perfect six-of-six from the floor, he shot 1-of-13 for the rest of the contest, finishing 7-of-19.

Justyn Mutts (18 points, 10 rebounds) and Keve Aluma (19 points, six rebounds) defended him for most of the game and managed to stay out of foul trouble. But even when he wasn’t scoring, he was snatching the ball off the glass. Ten rebounds in the first half, nine in the second. Young described him as “a grizzly bear.”

“He’s really active, really aggressive, really athletic,” Justyn Mutts said of Bacot after the loss. “He’s a hard guy to stop, and he’s going to keep coming at you every single play. … Once the shot goes up, that’s when the real battle starts.”

With Bacot essentially a non-factor in terms of scoring in the second half, others had to step up for the Tar Heels. Found them they did, and a handful of them.

Hubert Davis & Co. were searching for answers and found them, and combined with their presence on the boards – 43 total rebounds to Tech’s 32 – the Hokies couldn’t retake the lead. A few clutch threes from Manek, who finished 4-of-8 from behind the arc, sealed the contest.

UNC tied a season-high by a VT opponent in offensive rebounds with 16 (set by Boston College on Saturday). Only Memphis (45 rebounds) had more total boards against the Hokies this season, too.

Against any other team in the league, Tech’s 32 rebounds would’ve cut it. That’s the team’s second-most this season, behind 37 at NC State. But a -11 margin on the glass is killer.

“Not good enough,” Young said of his team’s performance in the final few minutes.

The Hokies just didn’t have that kind of stretch in them in Chapel Hill. This came after the first half, which was runs galore.

It’s been a game of runs, and an amazing one at that.

UNC outlasted VT to hold on to its perfect 10-0 record at home this season. The Hokies played good defense for the majority of the game, scored the ball well, but couldn’t get much-needed stops in crunch time. In many ways, that’s the story of conference play for Tech.

The team’s schedule doesn’t get any easier this week. Miami and Florida State, the two teams sitting atop the Atlantic Coast Conference, are on the docket over the next five days.

“Keep digging.” That’s what Young’s message was to his team after the game.

Tech was there for 40 minutes, even when it didn’t seem like it, but didn’t have enough in the end to pull out the victory. The Hokies have a day to recharge and regroup before hitting the hardwood again vs. the Hurricanes on Wednesday.

“This is hard. Hard for my team,” Young said. “I thought we played well enough in a number of spots to win. … Just didn’t handle the things down the stretch that we need to handle.” 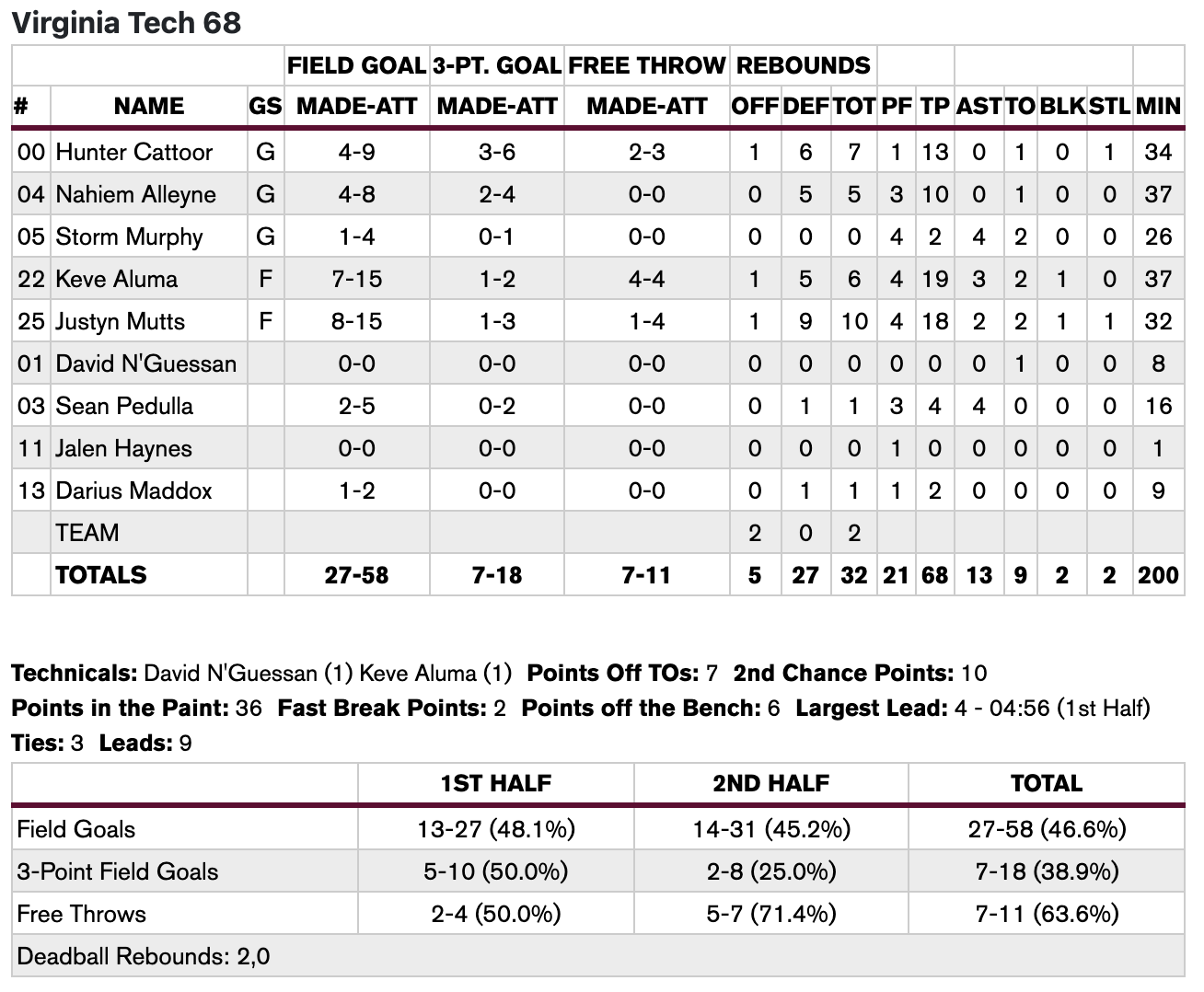 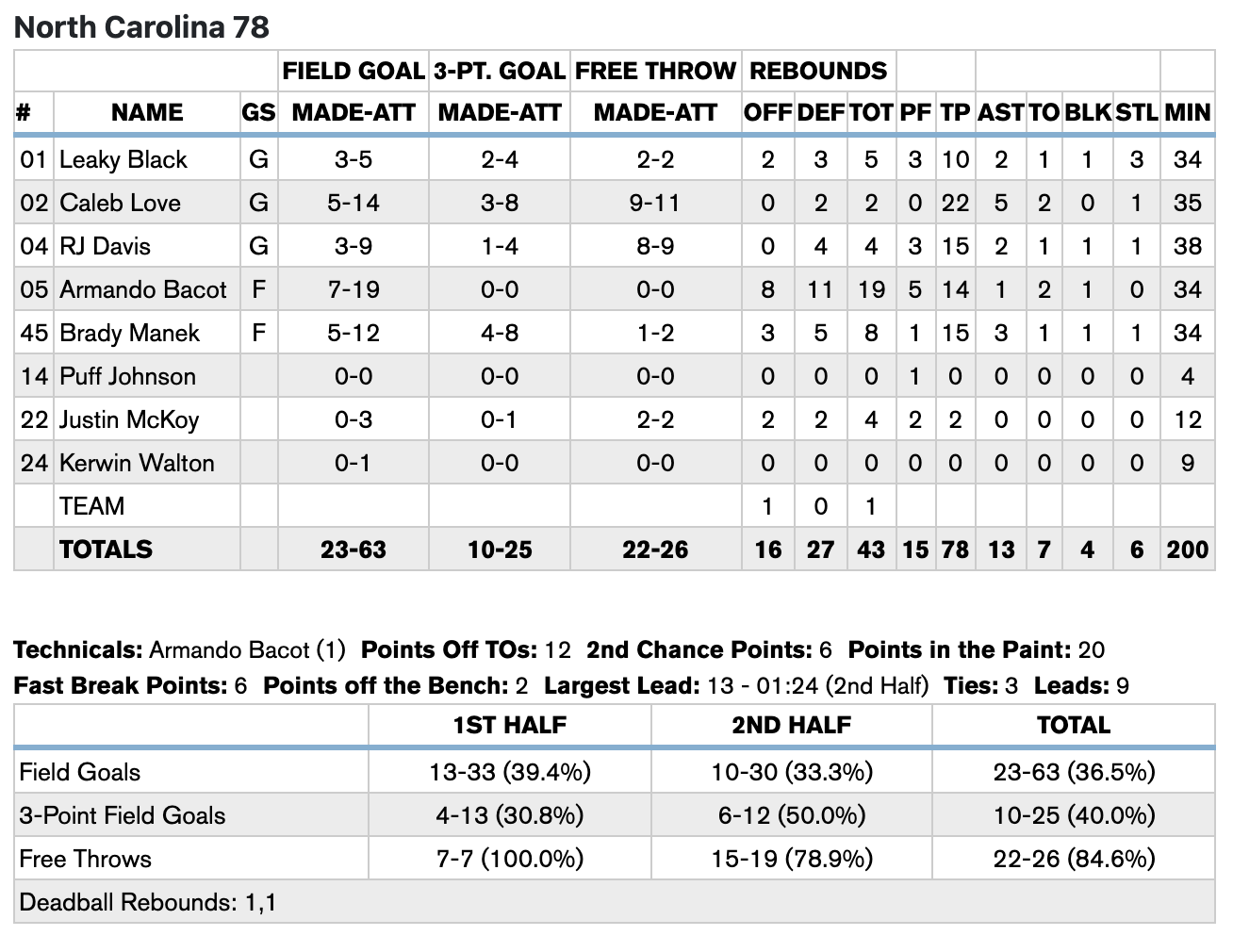