Entering Saturday, Virginia Tech had just two wins through six ACC games, and both victories came in the last week.

With the most dangerous week of the 2021-22 gauntlet on the horizon – games at North Carolina, vs. Miami and at Florida State in seven days – the Hokies needed a good result in Chestnut Hill at Boston College.

They didn’t get one.

Virginia Tech (10-8, 2-5 ACC) led by eleven points in the first half, but the Eagles (8-9, 3-4) roared back and trailed by two at halftime. The Hokies faced severe foul trouble, a first this season, as Keve Aluma, Justyn Mutts, David N’Guessan and John Ojiako all had two personals.

Aluma and Mutts sat for the last six minutes in the half, yet Tech still retained the lead. That was good news heading into the final 20 minutes. But the Hokies looked outmatched down the stretch, flashbacks to multiple games this season.

Most evident was the late game slide. Similar to so many previous losses, Virginia Tech lacked the “clutch gene.” Against UVa, it was shooting 0-of-3 and turning it over three times in the final three minutes. In the loss to NC State in Blacksburg, it was turning the ball over three times, missing two free throws and allowing eight offensive rebounds in the last five minutes.

Saturday at Boston College? 1-of-7 from the floor in the final four minutes, including 0-of-4 from deep, the last four shots the Hokies attempted. Worse: Virginia Tech allowed Boston College to grab five offensive boards in the final two minutes.

Combine that with a career afternoon from BC’s James Karnik (26 points) and the Hokies lost their fifth ACC game.

“We played him [Karnik] two years ago when he was at Lehigh and I was nervous about it,” Young said. “He’s a good player now, don’t get me wrong. He’s big and he’s a physical kid, but our inability to rebound the ball was… I’m mystified.”

He was the story of the game, to which Young alluded. But he had help from his teammates, especially in the second half.

The Eagles shot 48% from the floor in that span and grabbed 11 offensive boards, finishing the game with 16 in total. That’s the most Virginia Tech has allowed this season, topping 15 by Memphis and 14 by NC State.

Karnik had four, and the Hokies struggled to box him out. Worse, Quinten Post, a seven-footer who played just nine minutes, grabbed three.

That kind of success on the boards and down the stretch appears to be this Tech team’s kryptonite. Young mentioned after Wednesday’s win over NC State (which featured five turnovers in the last five minutes) that the Hokies “have to handle those [late-game] situations better.”

That wasn’t how the dice rolled on Saturday. Matter of fact, the team has been poor in those situations in almost every league contest.

Below is a breakdown of Virginia Tech’s final five minutes in ACC games. Over that stretch, here are the Hokies’ averages: 34% FG, 22% 3FG, 2.4 turnovers. In addition, opponents are averaging 2.9 offensive rebounds.

The only league contest where one could potentially make a case that VT played well for the full 40 minutes is the win over Notre Dame. In every other game, Tech faltered at some point down the stretch in some category.

It’s even more interesting to look at and analyze the statistics of the players in the last five minutes. Storm Murphy, who had six points on Saturday, and Mutts lead the Hokies in points down the stretch with 15 each. Aluma’s efficiency is intriguing, as is Nahiem Alleyne’s, but Hunter Cattoor’s involvement, or lack thereof, might be the most surprising.

Point being, Virginia Tech has been very poor in late-game situations as a team, and the only individuals who stand out are Mutts and Murphy.

The Hokies were better in some areas at Boston College than they have been at other times this season. Zero turnovers, specifically. But poor shooting, not getting to the free throw line and allowing the Eagles five offensive boards set them back. BC isn’t even in the top half of the conference in offensive rebound rate: KenPom has Earl Grant’s group at No. 9. That’s bad news for a Virginia Tech team that faces UNC (No. 4) and Florida State (No. 5) over the next week.

“That hasn’t been something that I thought, ‘man, I have to shore that up,’” Young said of Tech’s rebounding issues.

The head man mentioned the need for guards to crash the boards better, like Cattoor, who didn’t have a rebound at BC. He also referred to Mutts, who averages seven and had just three against the Eagles.

Yet, this is the same team that gave up an absurd amount of rebounds to NC State. Off a COVID pause, mind you, but that seems like an area for concern.

All in all, there’s a slew of problems for this Tech team. It starts with the win-loss record and deals with consistency. The metrics like Young & Co. – and as long as the Hokies stay in games, will continue to like them – but when this team can’t make shots, it struggles. That sounds like a basic phrase, but a team like Virginia can win through its defense. Tech hasn’t played well enough on a consistent basis on that end to have that ability – VT is dead last in the league in defensive efficiency.

This college basketball season, more so than the past, has shown that teams with the best players tend to win more often. Yes, there’s KenPom’s luck factor – VT is 347 out of 358 teams – but in the end, it comes down to who can make plays, whether it’s on the offensive or defensive end.

The Hokies haven’t been consistent enough on either end in any of their conference games outside of Notre Dame, and when the shots aren’t falling, that comes back to bite them. The rebounding woes are a problem, but outside of that, it comes down to the offensive weapons a team has on the floor.

Young said the program has to move on to the next game, and he’s right. That’s all Tech can do right now – continue to improve and prepare for the next game. The luck will inevitability change, the shots will fall eventually, and the Hokies will continue to search for consistency.

But until that is found, it’s going to be a long roller coaster of a season. 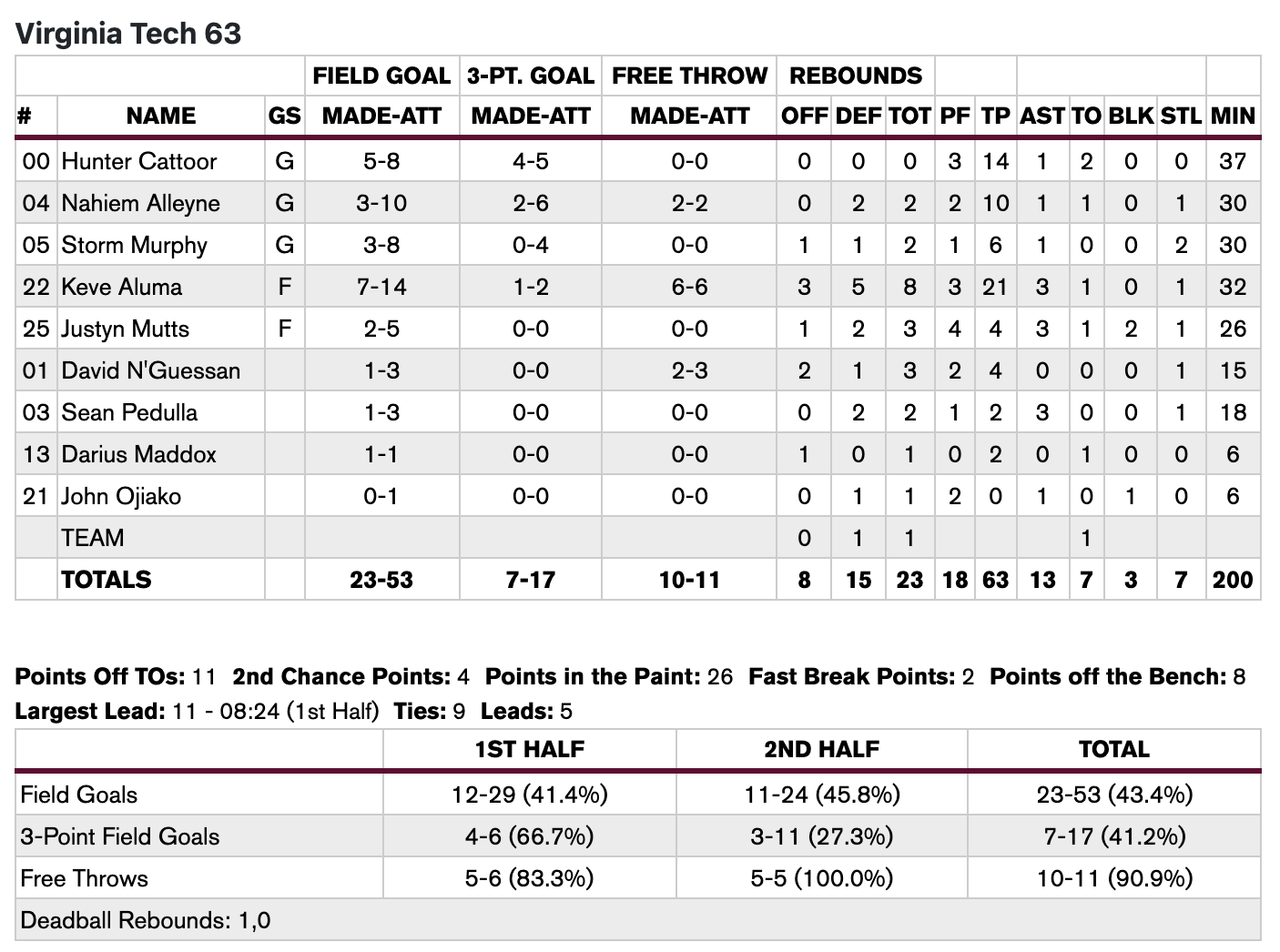 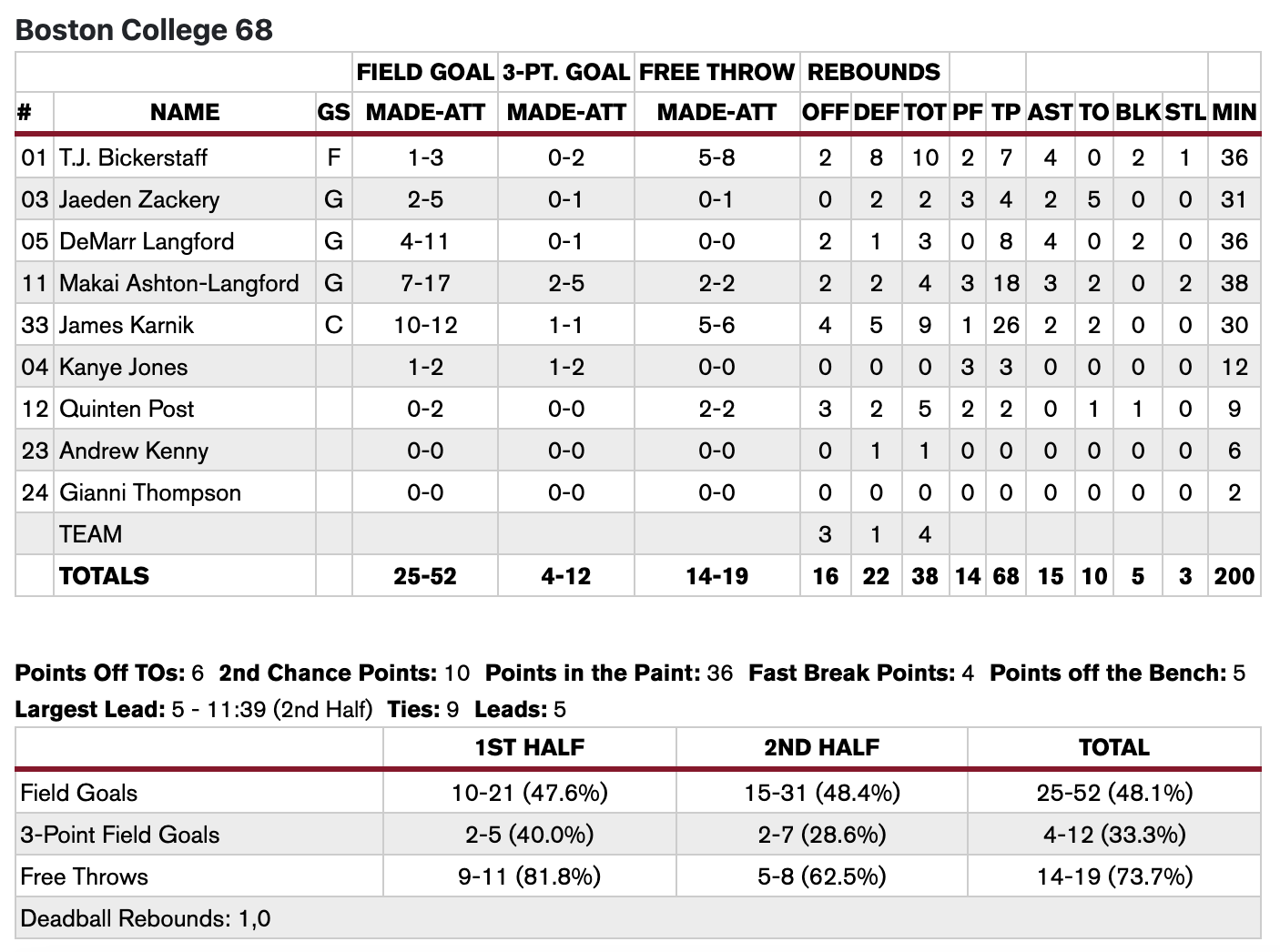