Double-doubles have become a regular thing for Elizabeth Kitley. On Tuesday night, the junior dropped 24 points and 10 rebounds, her seventh consecutive double-double, which helped lift Virginia Tech to a 69-52 win over Virginia.

“She’s special,” Virginia Tech head coach Kenny Brooks said of Kitley. “Trust me when I say this, and I don’t want to sound too confident: She’s not peaked yet. She’s not reached that yet. She has more, a lot more.

“Her defense has gotten so much better. She controls the paint. … I think her defense has been tremendous this year, it’s gotten a lot better.”

Senior point guard Kayana Traylor complemented Kitley well, adding a speedy slashing presence. The Purdue transfer has grown into a starting role over the past five games, and her experience gives the Hokies another backcourt option alongside Georgia Amoore.

Her quickness and ability to attack the rim is a unique asset, and it completely changes the way Virginia Tech can play.

“She’s really good at drawing fouls and just getting downhill,” Brooks said. “She gets downhill a little bit different than Georgia. … We used to be a team where Georgia was the only one who would put the ball on the floor, and now we have two of them.

However, even with Kitley and Traylor carrying the scoring, the Commonwealth Clash victory wasn’t a pretty contest.

Both teams didn’t shoot well – 38% for VT, 36% for UVa – and there were 25 total turnovers. Neither side hit better than 46% of its shots in a quarter, and in the end, Tech’s seven 3-pointers – Virginia had three – was the difference, especially late. The Hokies were 3-of-4 from deep in the fourth period, and it seemed like any time the Cavaliers might respond, Tech hit a trey.

“I think we had a lot of miscommunication out there because we didn’t talk, we didn’t communicate,” Brooks said. “They know that, they know we have to be better at that, and that’s some of the inconsistencies we’ve had. I think we rely on the big things too much. We haven’t shot the ball well the last few games. We’ve got to do the small things that will keep us where we want to be, and then the big things will come.”

Monday was Martin Luther King Jr. Day, and Brooks has used quotes from Dr. King as examples to his players throughout the season. One quote that Brooks used to describe Tuesday’s situation was, ‘If you can’t do great things, do small things great.’

Sure, the Hokies outrebounded Virginia (36-34), forced 16 turnovers, blocked seven shots and scored 26 points in the paint, but it wasn’t a good performance in many aspects. There was a lack of energy at times, which led to sloppy play, and those are the minuscule things Brooks references.

“That’s been our MO: Let’s do the small things,” Brooks said. “Small things will equal up to the big things, and I didn’t think we did the small things today. I thought we were a little bit disjointed. We didn’t play as well as we could’ve together.

“I thought we tried to do it by ourselves sometimes, and then we weren’t connected on the defensive end like we had been previously. … You can generate your own energy, and they need to be able to do that.”

It was a sub-par shooting night for Aisha Sheppard, who finished with 11 points (2-14 FG, 2-9 3FG). Five of those came from the free throw line (5-6 FT), though she did dish out a team-high five assists. Georgia Amoore added seven points and four assists, while Cayla King had eight points and five rebounds.

For UVa, Taylor Valladay and Amandine Toi led the way. Valladay scored ten of her 16 points from the free throw line, similar to Sheppard (3-10 FG, 10-13 FT), and had six rebounds and six assists before fouling out late in the fourth quarter. Toi added 15 points, though her 6-of-16 effort wasn’t enough to keep the Cavaliers in the game.

Next up for Virginia Tech is Pitt (10-7, 1-5 ACC) on Thursday evening (8 p.m. ET) in Cassell Coliseum. The Hokies have won five straight against the Panthers under Brooks, including a 74-55 drubbing in Pittsburgh last February.

That contest, while important, is a tune-up for the game of the week in Raleigh. Virginia Tech squares off with No. 4 NC State (16-2, 7-0 ACC) on Sunday at 4 p.m. in the first of two clashes this season. Tech got the best of the Wolfpack once last year, an 83-71 overtime win in January.

“We have to control the narrative and do better if we want to continue on this trajectory and be one of the better teams in the league,” Brooks said. “I like it, and we’ll continue on. We don’t have much time to cherish or dwell on what happened today because we’ve got Pittsburgh coming right up on Thursday.” 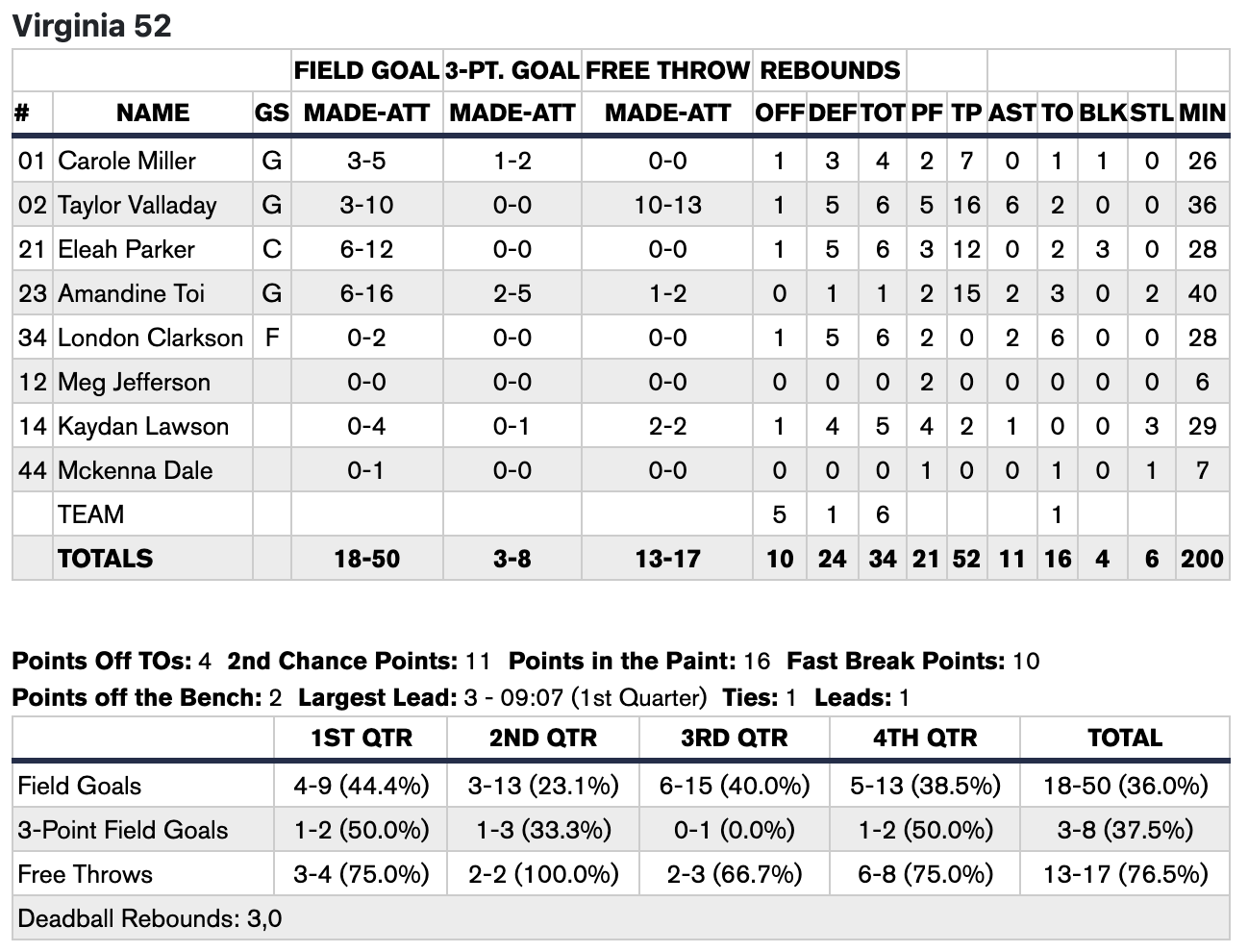 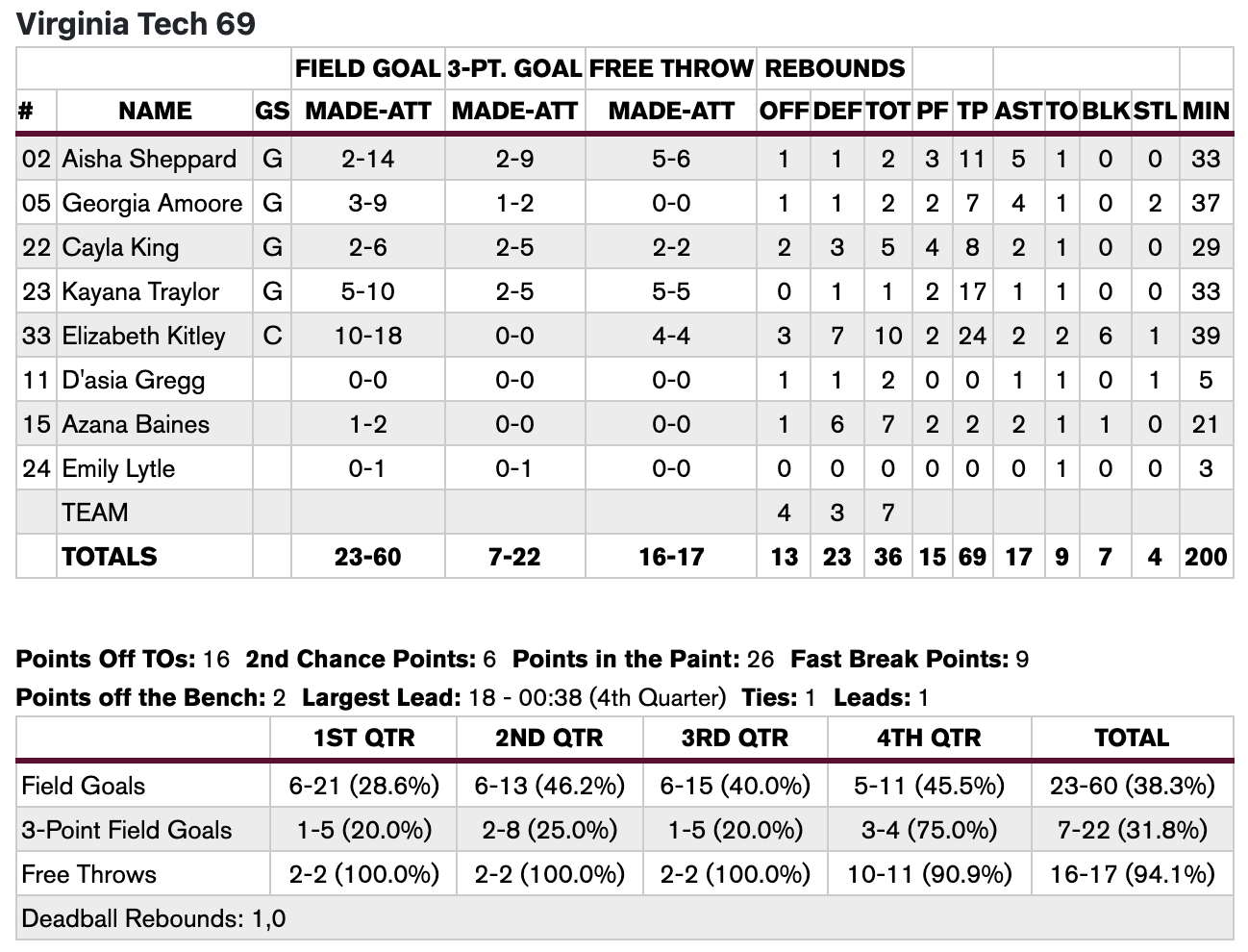