“Every storm starts with a raindrop.”

That’s what David Jackson, the assistant AD for strength & conditioning at Virginia Tech, told the Hokies after their 79-73 win over Notre Dame.

As Tech forward Justyn Mutts said, the team just needed one raindrop to get going. Mike Young & Co. found that on Saturday evening in Cassell Coliseum thanks to a big second half and a solid team effort.

Tech trailed the Fighting Irish 40-32 at intermission, though both teams shot better than 50%. Notre Dame couldn’t seem to miss, evident in a prayer Prentiss Hubb got to fall right before halftime, even with Hunter Cattoor in his face.

“I think in the first half, they were just making everything,” Mutts said after Tech’s win. “You’ve got to force them to miss, you can’t hope they miss.”

Two runs of eight and nine points helped Tech pull within one possession, but it wasn’t until Keve Aluma hit a jumper with 5:52 to play and got fouled by Nate Laszewski that the team reclaimed the lead. After a technical foul on Irish head coach Mike Brey, Tech made three free throws to go up two, 64-62.

Though the score was tied up twice over the final few minutes, the Hokies were in the driver’s seat for the rest of the game and never trailed again.

“We stayed connected through the downpour,” Mutts said, “and by not falling apart when things are getting rough, I feel as though that helped us become a better team today.”

Down the stretch, Virginia Tech was the better team. In previous ACC games – at Duke, vs. NC State, at Virginia – opponents have gotten the best of Young’s group, and important results have slipped away.

“You’ve just got to be mentally tough every single day,” Alleyne said. “When adversity hits, who are you? That’s really it. My mindset was just keep going. The storm eventually ends.”

Mutts had a game-high 24 points, his season-high, and made nine of his 11 attempts. He did it all, making five-of-six free throw attempts, grabbing seven rebounds, dishing out three assists, adding a steal and coming up with a clutch block on Notre Dame’s final possession.

After the loss at Virginia, Young mentioned the need to get Mutts more involved. Tech did that on Saturday, and Mutts was more aggressive. He attacked the rim, and he and Aluma (17 points, 7-14 FG, 8 rebounds) were too much for Notre Dame to handle. Both bigs for the Irish, Paul Atkinson Jr. and Nate Laszewski, got in foul trouble, and Atkinson fouled out with 1:06 to play.

“I begged him, ‘we need for you to be assertive,'” Young said of Mutts. “He’s got to have more touches, I’ve got to do a better job at that, we had a conversation about it the day after the UVa game Thursday about that very thing. ‘I’ve got to do a better job of getting you the ball, doggone it.’ When the thing’s in there, stop looking to chuck it out of there, because he’s a terrific passer. I thought it [tonight] was a nice mix of both.”

The tide seemed to turn in the game around the seven-minute mark in the second half when Atkinson picked up his fourth foul. That was when the aforementioned 9-0 run for VT ensued, and Tech snatched control of the game.

Solid defense willed the Hokies down the stretch, along with a few clutch buckets.

Up by three with 3:45 to play, Mutts found an open Alleyne for his fourth trey of the game. Then a few minutes later, hanging on by just two points with 20 seconds to play, Mutts hit Storm Murphy (12 points, 4-7 3FG), who drilled his fourth three of the evening and the eventual dagger.

As Brey pointed out after the game, winning in the ACC is difficult. The Irish are no stranger to that: Three of their ACC games went down to the wire. It’s been a similar theme for the Hokies, and the victory over Notre Dame comes at a good time.

A rematch with NC State, who got the best of Tech back on Jan. 4 (68-63 loss), awaits in Raleigh on Wednesday. It’s the first of a three-game road trip, which features contests at Boston College (Saturday, Jan. 22) and a rescheduled game at North Carolina (Monday, Jan. 24).

Now the Hokies can breathe. They got that first conference win. There are many more challenges to come, indeed, but they got the monkey off their back.

Tech will try to emulate Saturday’s second half performance throughout the rest of the season, that’s for certain. 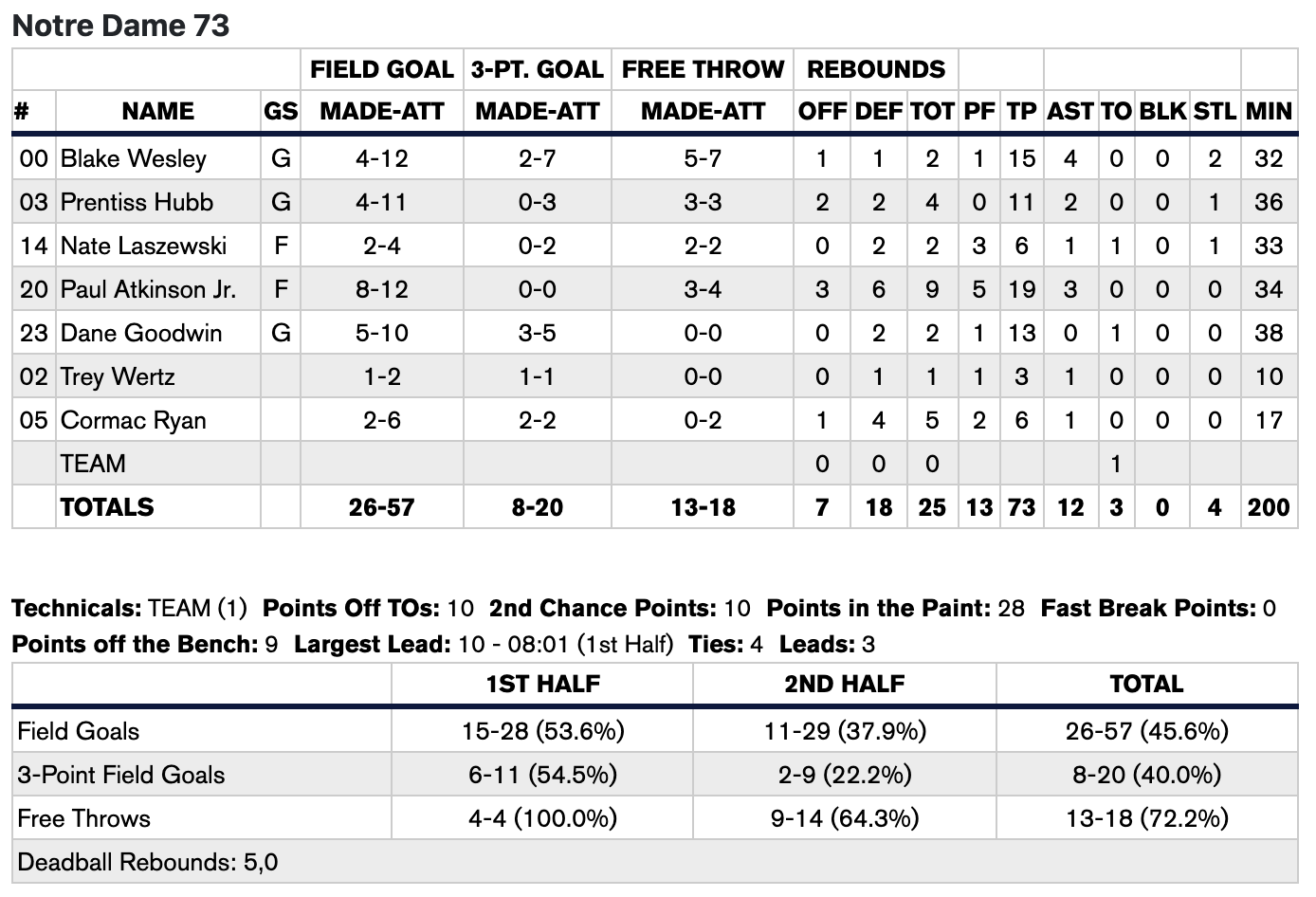 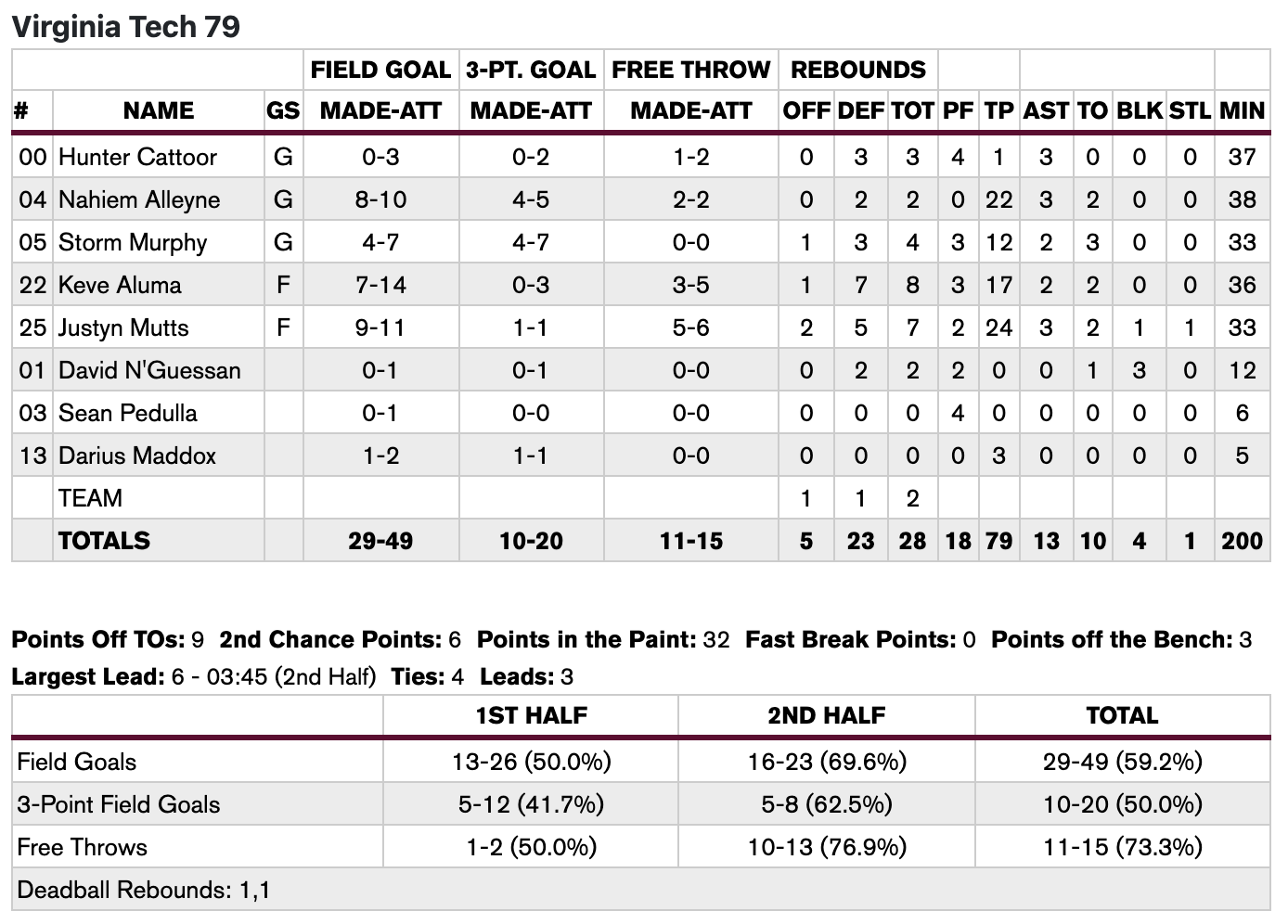