It could have been the open shot from the three point line, the basketball flying through the air, or maybe even the certainty Aisha Sheppard had knowing her shot would find the bottom of the basket. As she back peddled to the other side of the floor, the Virginia Tech bench was celebrating long before her bucket swooshed through the hoop at Cameron Indoor Stadium on Thursday night.

Once the ball hit the floor after Sheppard’s three-pointer with two minutes left, the scoreboard ticked 10 points in the Hokies’ favor, and a mob of VT players pointed and shouted at Virginia Tech’s fifth-year guard in excitement. As she got back on defense after she hit the dagger to put the Blue Devils to bed, a grin appeared on Sheppard’s face, one that hasn’t been seen for a couple games.

On Sunday, she was carried off the floor by a trainer and a teammate after landing awkwardly on her leg in a blowout loss to No. 19 North Carolina. Tuesday, she returned to practice. Two days later, she dropped 13 points with three treys to help Virginia Tech (12-4, 4-1 ACC) sweep No. 16 Duke (11-3, 2-2 ACC) for the first time in program history, 65-54.

“[Sheppard] and I spent a lot of time getting back into a rhythm,” Brooks said of Sheppard’s shooting struggles. “… It’s a matter of her getting comfortable — she’s a rhythm kid. When she gets into a rhythm, she’s going to start making those shots.”

On the next possession after Sheppard’s dagger, Duke’s Shayeann Day-Wilson nailed two free throws to cut the Hokies’ lead to eight. Then, Tech’s biggest star got another chance to line up from the 3-point line, this time with 80 seconds to play.

As Sheppard tossed a pass down low to Kitley to work close to the basket, VT’s 6-foot-6 center couldn’t find an open shot. The shot clock dwindled from seven seconds to four, but Kitley didn’t panic.

Kitley calmly kicked the ball out to a wide-open Sheppard — her defender left her open to double-team Kitley — who nailed a three on the right wing as the shot clock neared zero.

“[Kitley] demands so much attention that it frees other people up,” Brooks said.

Duke head coach Kara Lawson yelled at Vanessa de Jesus for abandoning her assignment, but by then it was too late. Sheppard’s basket stretched the Hokies’ lead to 11 and iced a second half that saw them outscore Duke by 18 after erasing a seven-point halftime deficit.

Yet the first half wasn’t all sunshine and roses for the Blue Devils. They, too, trailed by seven early. Thanks to two buckets from Kitley and a 3-pointer from Georgia Amoore, the Hokies quickly waltzed to a 7-0 lead less than two minutes in before surrendering it later.

After leading 14-13 at the end of the first quarter, Virginia Tech quickly dug itself into a hole when it conceded an 8-0 run. Tech tied the score at 25 on an Amoore layup with 2:39 left in the second period, but the Hokies once again found themselves on the wrong end of another run. This time, the Blue Devils went on a seperate 7-0 stretch to close out the first half.

But Duke failed to capitalize on its two runs in the second half and couldn’t rediscover its rhythm. The Blue Devils were just 7-of-26 (26.9%) and only made 1-of-5 shots from beyond the arc.

Virginia Tech struck back in the third quarter thanks to Azana Baines’ seven points, Kitley’s and Amoore’s two baskets and a Cayla King 3-pointer. That capped a 21-point scoring outburst and Tech led 46-44 at the end of the third quarter.

“[Baines] was my player of the game,” Brooks said of the Duke transfer, who scored eight points and added a team-high 16 rebounds. “We think these kids are robots, but they have feelings and sentimental thoughts. … She’s someone that we missed in our first matchup with Duke a couple weeks ago. She’s our enforcer.”

Four minutes into the fourth, Duke tied the score at 48. Sheppard tossed a pass down low to Kitley, who kicked it back out to Sheppard on the right wing for a three. It was the same exact play VT ran later on Sheppard’s final trey of the night, and it gave the Hokies the lead for good.

Virginia Tech turned that into a 17-8 run of its own, and even though it wasn’t flawless on the offensive end (36.9%), it was enough to secure the win. The Hokies held onto a double-digit lead against an ACC opponent, something they’ve had trouble with in previous years.

There was no fourth quarter meltdown and Brooks & Co. looked in control all the way down the stretch.

“We’re a rhythm team so we like to get stops and that flows into our offense,” Sheppard said. “So that was our focus — just getting stops and making them take tough [shots], so we could get the rebound and go.” 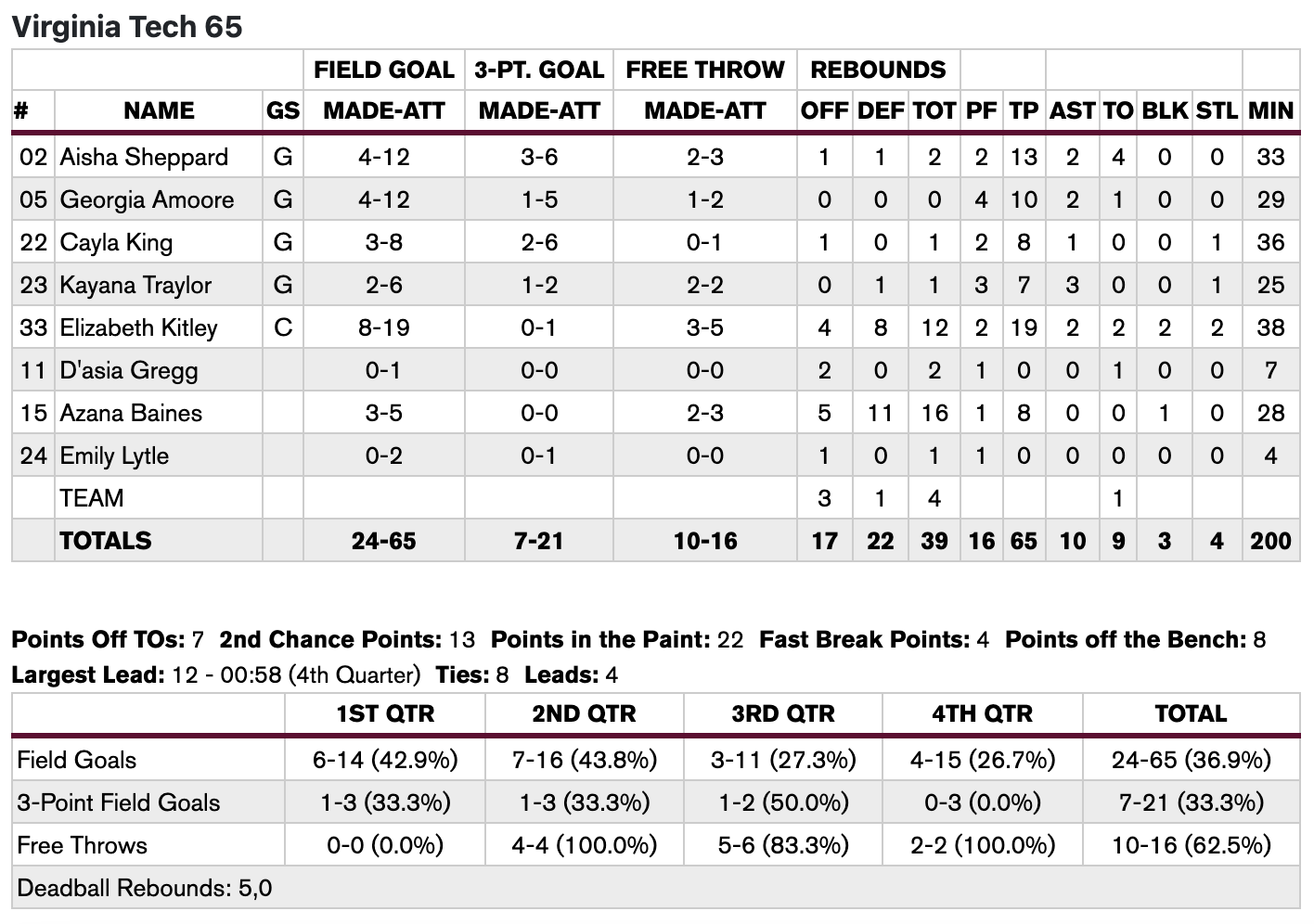 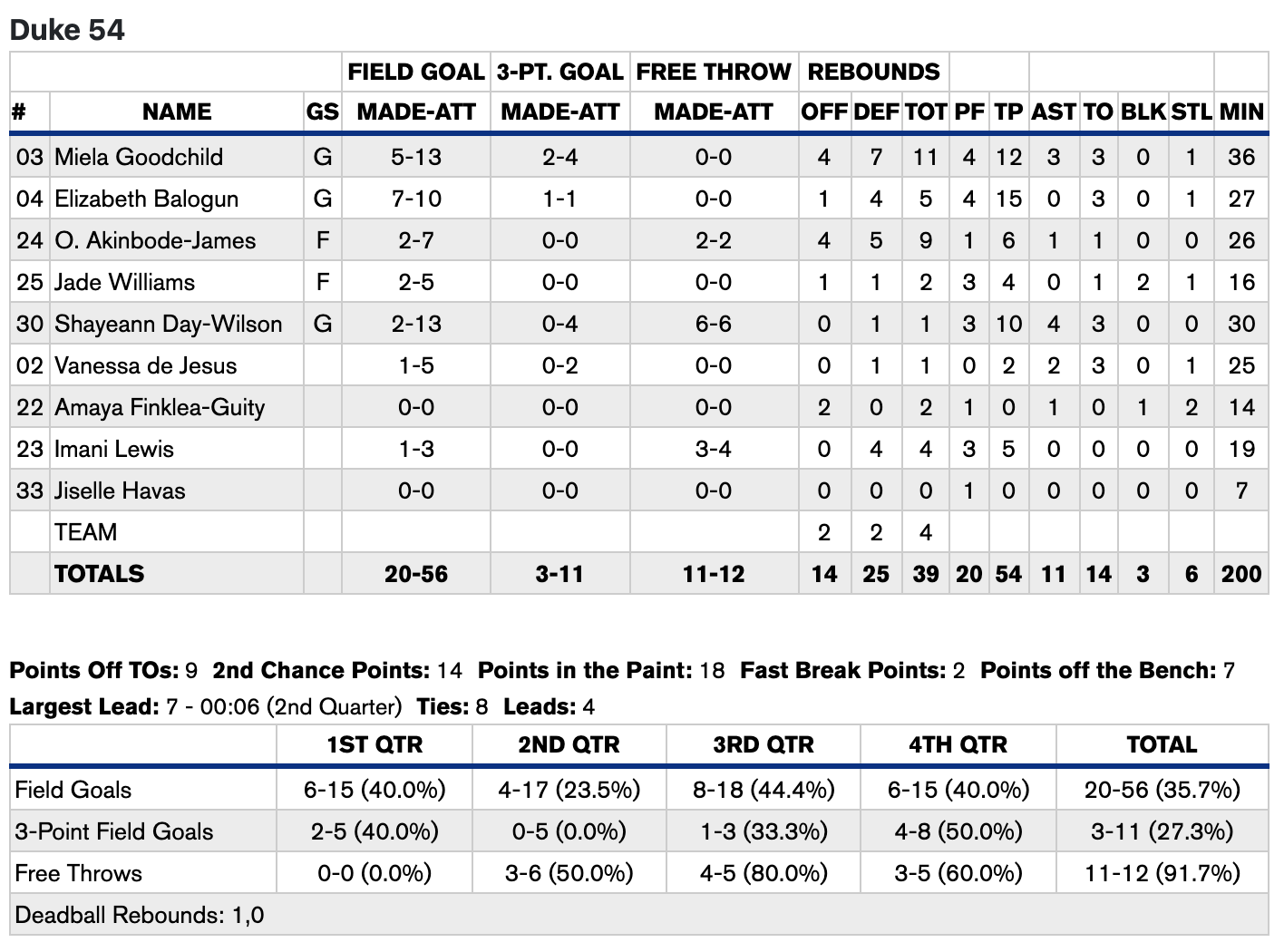