In a game that featured 13 lead changes and came down to the wire, Virginia Tech let another win slip away, this time in a 54-52 loss to Virginia.

The Hokies (8-7, 0-4 ACC) shot 42%, hit seven three-pointers and held UVa to 40% from the floor in Charlottesville. But it was the final three minutes that determined the outcome, and the Cavaliers (10-6, 4-2 ACC) were the better team down the stretch.

Leading 52-49 with 3:01 to play, Tech turned the ball over three times and missed three field goal attempts, two at the buzzer.

An errant Justyn Mutts pass was followed by a lost ball and a travel from Keve Aluma. The Hokies attempted just one field goal – a hook shot from Aluma with 1:08 to play – in four possessions. It wasn’t until they trailed by two with five seconds left that they hoisted two shots, both of which did not fall.

Head coach  Mike Young & Co. stayed competitive on the glass – a 31-29 margin in UVa’s favor – but were outmatched in points off turnovers (14-3), second chance points (9-2) and bench points (18-2). A common trend as of late, Virginia Tech came up empty handed again.

“I thought we had good shots [down the stretch],” Young said afterwards. “Keve [Aluma] just had an unfortunate play. The last one, Hunter [Cattoor] gets a great crack at it and Justyn Mutts sticks his nose on the offensive glass and gets that thing back out of there and we get a pretty good crack at it from Storm that doesn’t go down.

“Did Virginia stiffen up and play good defense? They did … I think it was just a matter of a really good Virginia defense that just got the better of us in that particular stretch of the game.”

Keve Aluma (22 points, 9-20 FG, 6 rebounds) had a phenomenal night and was the best player on the court. He singlehandedly kept his team in the game, though he isn’t Superman.

He beat both Kadin Shedrick and Francisco Caffaro off the dribble frequently, but when the Cavaliers trapped him with two minutes to play, it surprised him. The fifth-year senior turned it over out of bounds. Then with an opportunity to tie the game with 15 seconds to play, he slipped while driving to the rack and was called for a travel.

“The kid [Aluma] played his guts out,” Young said. “Such a difficult matchup for a number of people. [Francisco] Caffaro and [Kadin] Shedrick did a good job with him, very physical. I thought a little more physical than we’re accustomed to.”

Hunter Cattoor and Storm Murphy each contributed ten points, but Aluma was the sole motor for much of the game. Nahiem Alleyne and Mutts scored just eight combined points, and the lone bench bucket was a second half dunk from John Ojiako.

Though he hadn’t played much as of late, Ojiako saw 13 minutes due to foul trouble with Mutts. Darius Maddox also played eight minutes. However, Sean Pedulla and David N’Guessan didn’t get more than two apiece.

Still, Tech had its best defensive performance in league play to date. UVa shot 40%, including 36% in the first half, made just three treys and star Jayden Gardner was held to four points (2-10 FG).

Earlier in the week, Young preached connectivity on the defensive end. He got that, and the Hokies played well enough to win the game.

Tech just didn’t have the boost off the bench that UVa did.

Aluma is talented – he’s scored in double figures in all but two games – but he can’t do it all. Murphy and Cattoor combined for 20 points, but Wednesday night showed that there isn’t enough depth on this Hokies team at the moment to consistently win ACC games.

It was the opposite with Virginia. With Gardner not his usual self, Caffaro stepped up and had a career night: 16 points, 10 rebounds. Defensively, he was physical with Aluma all night long, and he provided an aspect off the bench that the Hokies just couldn’t match.

At 0-4 in the conference, Virginia Tech’s schedule doesn’t get any easier. After hosting Notre Dame (10-5, 4-1 ACC) on Saturday, three straight road games await, including five of the next seven away from home.

An experienced team with three fifth-year seniors and two juniors is winless in the ACC. No one would’ve projected that at the beginning of the season. Yet, it’s the reality.

The group seems close to getting over the hump. Indeed, their defensive numbers have improved lately, and they’ve led late in their last three league contests. But at some point, wins and losses go farther to prove a team’s identity than metrics, which currently like the Hokies.

When it comes down to it, Virginia Tech lacks depth. And when starters have off-nights, the team is stuck in a bind. The Hokies will continue to search for answers, as any competitor would, but at this point, even a trip to the NIT seems like a long shot.

“At the end of the day, we have to play good basketball and keep chugging away,” Murphy said. “It’s not like we need to completely change our system and completely change these things. I just think we have to stick to it and trust our coaches and really try to focus on coming in and having a good practice. Know that we can’t waste a moment together as a team, we can’t waste a single possession.”

That may be true, but it’s like a ship that’s taking water. Unless you’ve got excellent tools to overcome it, you’re bound to sink sooner or later. Tech’s kept afloat for now, but after the loss in Charlottesville, it doesn’t look like the Hokies are going to be able to bail themselves out between now and March. 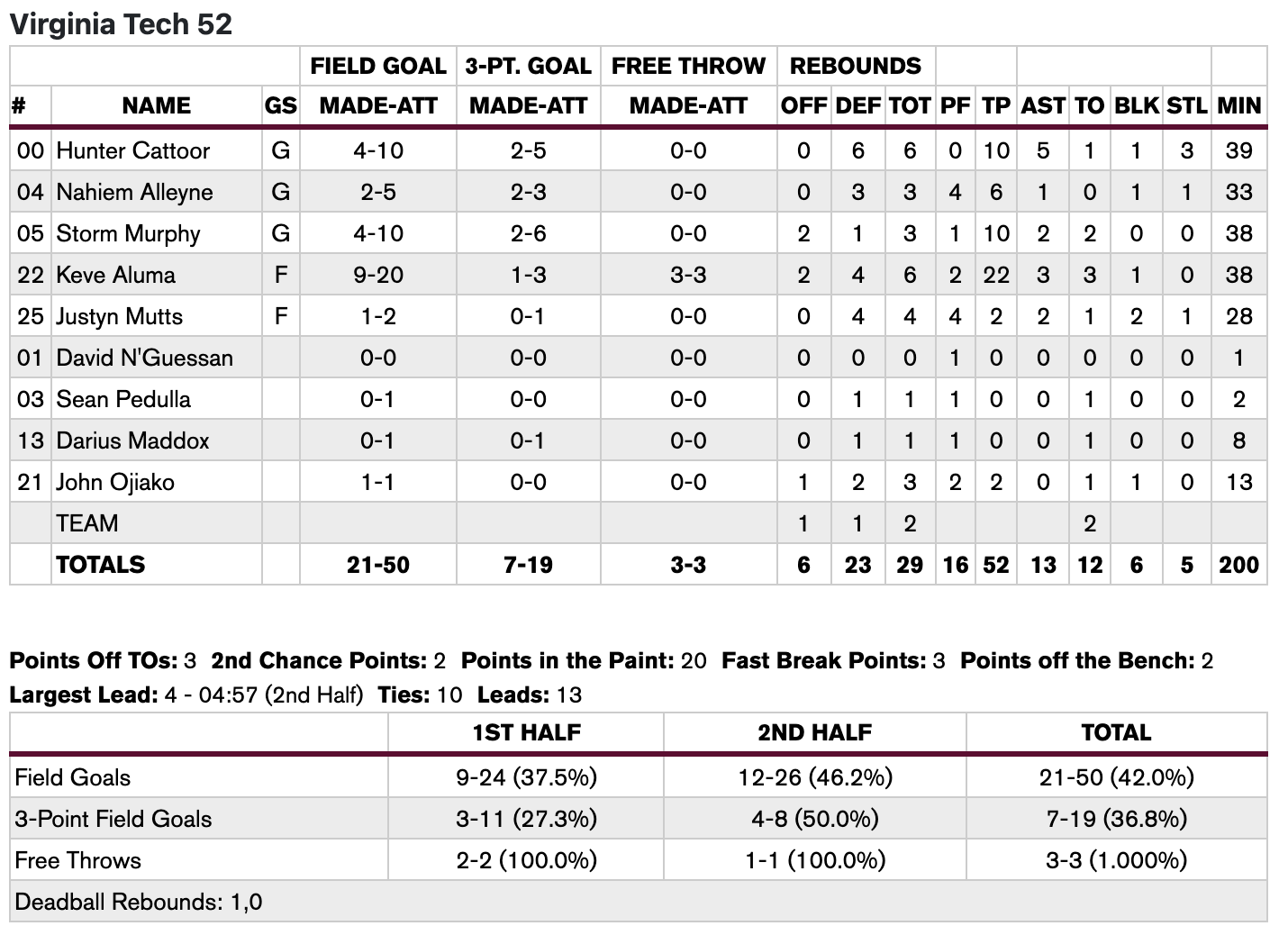 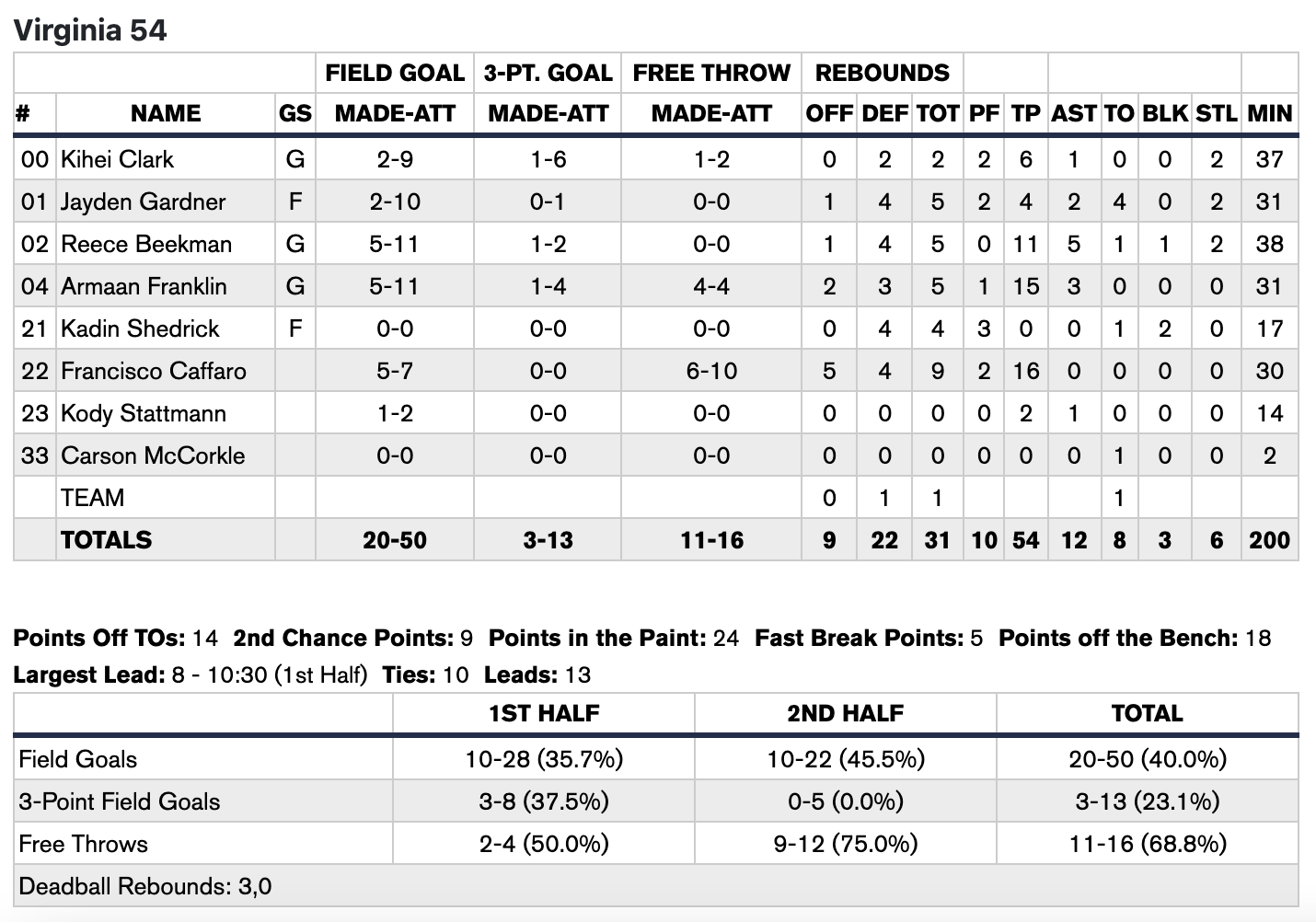