On Wednesday, Virginia Tech and Brent Pry announced the hiring of Fontel Mines as the program’s wide receiver coach and offensive recruiting coordinator. The former Virginia Cavalier ventures to Blacksburg from Old Dominion, where he was the tight ends coach in 2021.

Mines has ten years of coaching experience at the Division I level, all coaching wide receivers or tight ends. A Richmond, Va. native (Hermitage High School), Mines got his coaching start at Chowan, a D-II school in North Carolina. There, he mentored Robert Holland, who set the D-II record for career receptions with 325 (which has since been broken).

After a year there, Mines began his career as a D-I assistant at his hometown school, Richmond. Over a five-year stretch from 2012-2016, he was on the Danny Rocco’s staff as a wide receiver coach (four seasons) and a tight ends coach (one season – 2014).

In late 2016, Mines followed Rocco to Delaware, where he was the program’s wide receiver coach and recruiting coordinator for three months. He left the Blue Hens for James Madison, where he was the inside receivers coach for one season on Mike Houston’s staff. He coached the 2017 CAA Player of the Year, John Miller, and helped the Dukes to the FCS Championship Game. In 2018, he added recruiting coordinator to his resume at JMU.

Mines joined Houston’s new staff at East Carolina as the a tight ends coach, inside receivers coach and recruiting coordinator in 2018. There, he coached Tyler Snead, who led the Pirates in receptions in back-to-back seasons. Snead had 119 catches for 1,283 yards and 10 touchdowns in two years and earned Second Team All-AAC honors in 2020. He also broke the ECU freshman record for receptions and touchdowns in a season and had 19 catches in a contest at SMU, the most in a FBS game that season.

On the recruiting side, Mines helped the Pirates pull the No. 4 class in the AAC in 2020. He ranked sixth among all AAC coaches in the 247Sports coach recruiting rankings in 2020 and 2021.

At Old Dominion, pupil Zach Kuntz led the Monarchs in receptions (73) and was tied for first on the team in touchdowns (five) in 2021. Two of Mines’ other mentees, Isaiah Spencer and Donta Anthony Jr., combined for 17 receptions, 198 yards and two scores.

Mines has a strong presence in the Commonwealth of Virginia as a recruiter. He’s held a recruiting coordinator title on two different staffs (JMU, ECU) and has signed a handful of prospects from the Richmond area over the years, per his all-time commits list on 247Sports.

Mines also had the honor of participating in the NFL Bill Walsh Minority Internship with Washington in 2014. He coached in the NFLPA Collegiate Bowl in 2015 as well.

As a player, Mines started 20 games in 42 appearances as a tight end at Virginia under Al Groh. He finished his career with 68 receptions for 757 yards and five touchdowns. Professionally, Mines had a three-year career in the NFL with the Chicago Bears.

With the hiring of Mines, Brent Pry has his ten full-time assistant coaches. The budget for that group, which has a total of 156 years of coaching experience, is $5.5M, as laid out in Pry’s contract.

Pry’s continued to fill out his support staff recently. On Tuesday, he added Brian Crist and Xavier Adibi – Crist as a senior offensive analyst, Adibi as a defensive analyst.

Below is a full breakdown of Pry’s new staff at Virginia Tech. For all stories pertaining to the staff, click here. 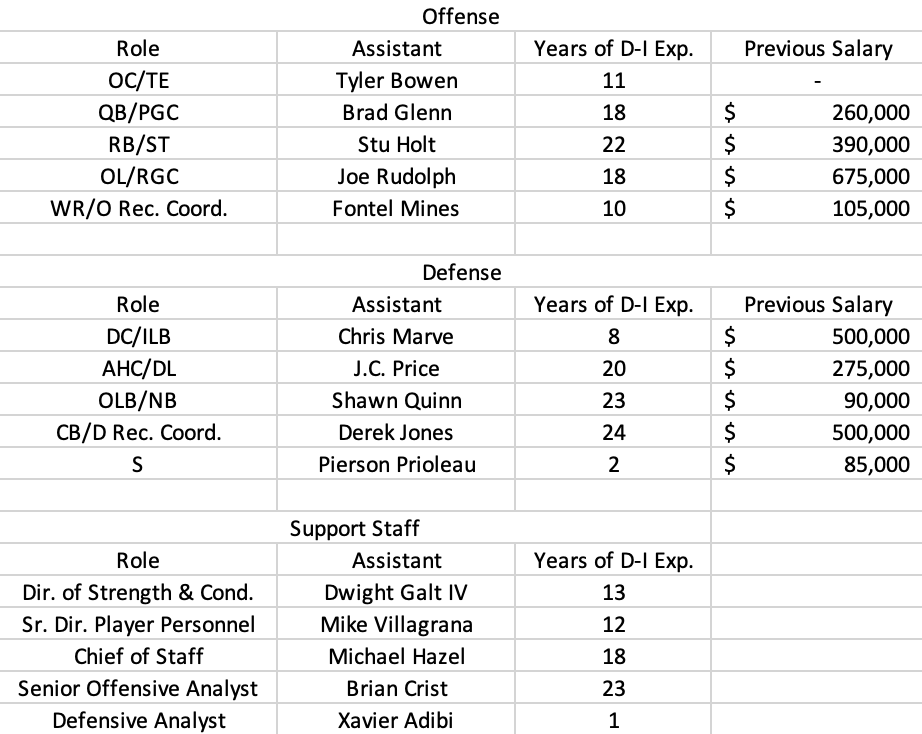