Aisha Sheppard stepped into a feed from Kayana Traylor after racing from the corner towards the top of the three-point line. Instead of pulling up from deep, Sheppard took a few steps into the paint, dribbled around her back once and released a mid-range shot that fell into the bottom of the basket.

It was the 5:03 mark in the first quarter, and the basket capped off Virginia Tech’s 12-0 run to begin Sunday afternoon’s game. Through VT’s first two conference matchups, she only produced 20 points — a solid contribution, but a stark difference from the Aisha Sheppard that dropped 30 points in Tech’s loss to then-No. 11 Tennessee a few weeks ago. It led the Hokies’ fifth-year guard to rediscover her stroke in a team-leading 15-point performance Sunday.

To complement Sheppard, three of her teammates also scored in double figures. Kayana Traylor, who stepped into the lineup for the second game in a row with Azana Baines unavailable, scored 15 points. Georgia Amoore added 14, while Elizabeth Kitley recorded her seventh double-double of the season with 13 points and 18 rebounds.

Collectively, it was the team’s best effort it had put together all season, something head coach Kenny Brooks mentioned after his team’s win over the Blue Devils a few nights prior. It was one in which his team played together, didn’t force bad shots and complemented each other well. And it was Tech’s third-straight conference victory to open the schedule, a first since joining the ACC in 2004.

The Hokies, though they might not admit it, have made it look easy. They beat down the Seminoles in Tallahassee by 17 — good for VT’s first win against FSU since 2014. Then, Tech took down a short-handed — but still a very much talented — Duke team in a 22-point win.

Short-handed in its own right, Virginia Tech beat Duke without Baines, which forced Brooks to find solutions to his lineup. On Thursday, he slid Traylor into the lineup and Cayla King to the 4-spot from the 3, and after Traylor gave 13 points and two assists to the lineup, Brooks penciled her back in on Sunday.

Even though Wake Forest might not have as much talent as FSU or Duke do, it was still a challenge, and more challenging ones lie in the weeds in the coming weeks. After Traylor’s layup on Virginia Tech’s second possession, followed by her three-pointer on the next offensive sequence, Virginia Tech started making shots at a pace the Deacons couldn’t match.

The Hokies’ defense trapped Wake Forest, forcing its offense into bad shots and bad passes. With 7:48 to play in the second quarter, Kitley tipped Malaya Cowles’ pass under the basket, allowing Sheppard to steal the ball and Cayla King to finish at the other end with a transition three. In the end, VT forced 15 turnovers.

Amoore helped facilitate threes in addition to the two she hit. On Sheppard’s steal, she caught the outlet pass at half-court and drove inside the arc before turning and finding King wide open on the wing.

It was plays like those that brought the team together in the win. It’s clear that the Hokies have the puzzle pieces to work with to be among the best in the ACC.

Tech’s found different options, different methods to manufacture points and win. The first two conference victories were dominant performances from Amoore and Kitley. Then, a total team-effort was needed to give the Hokies the boost against Wake Forest.

Sunday’s performance was without a takeover from a particular player, proving that Brooks’ team has multiple ways to beat an opponent. And with it came the emergence, and re-emergence of a key ingredient that mirrored Tech’s success last season. 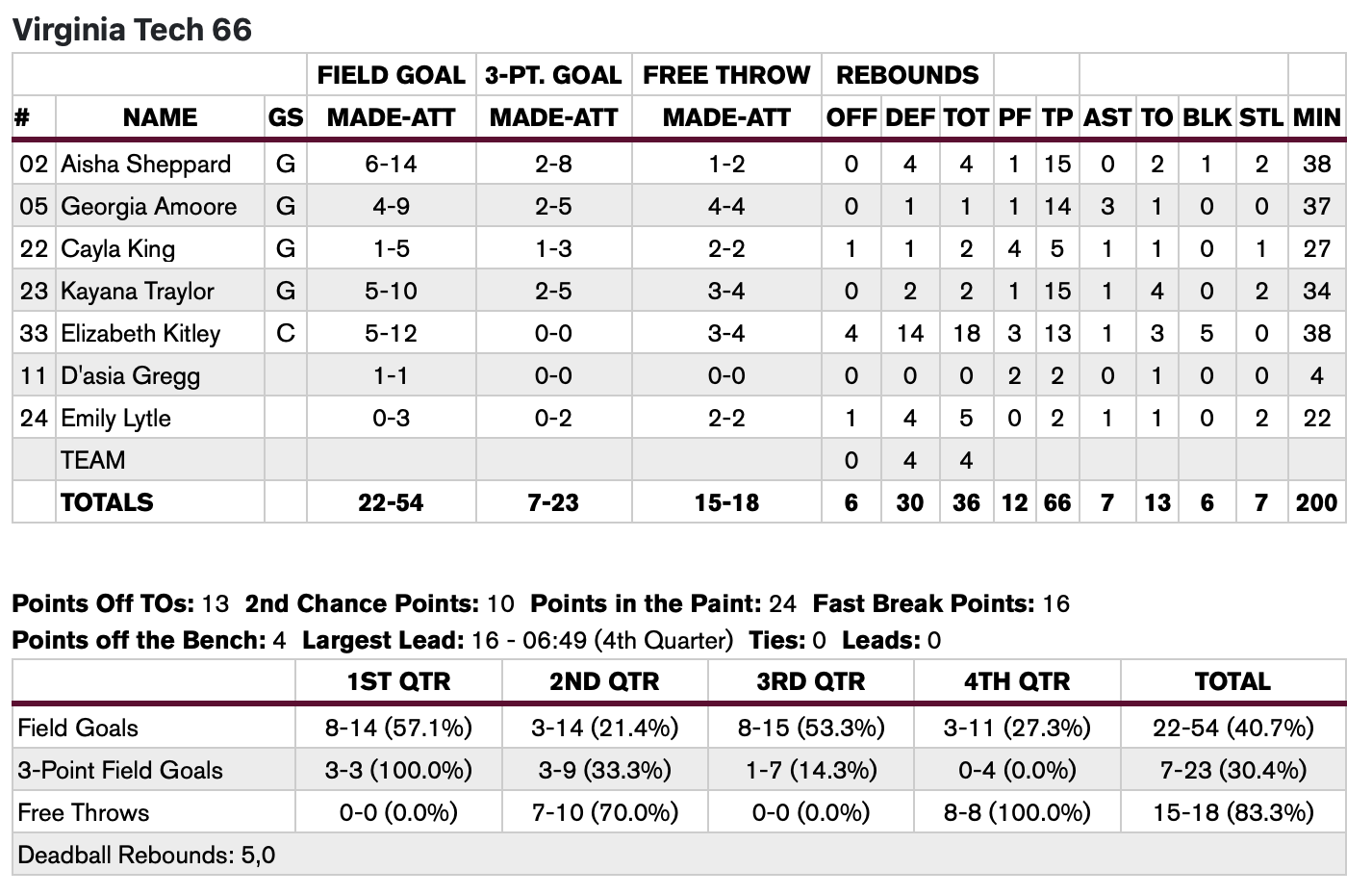 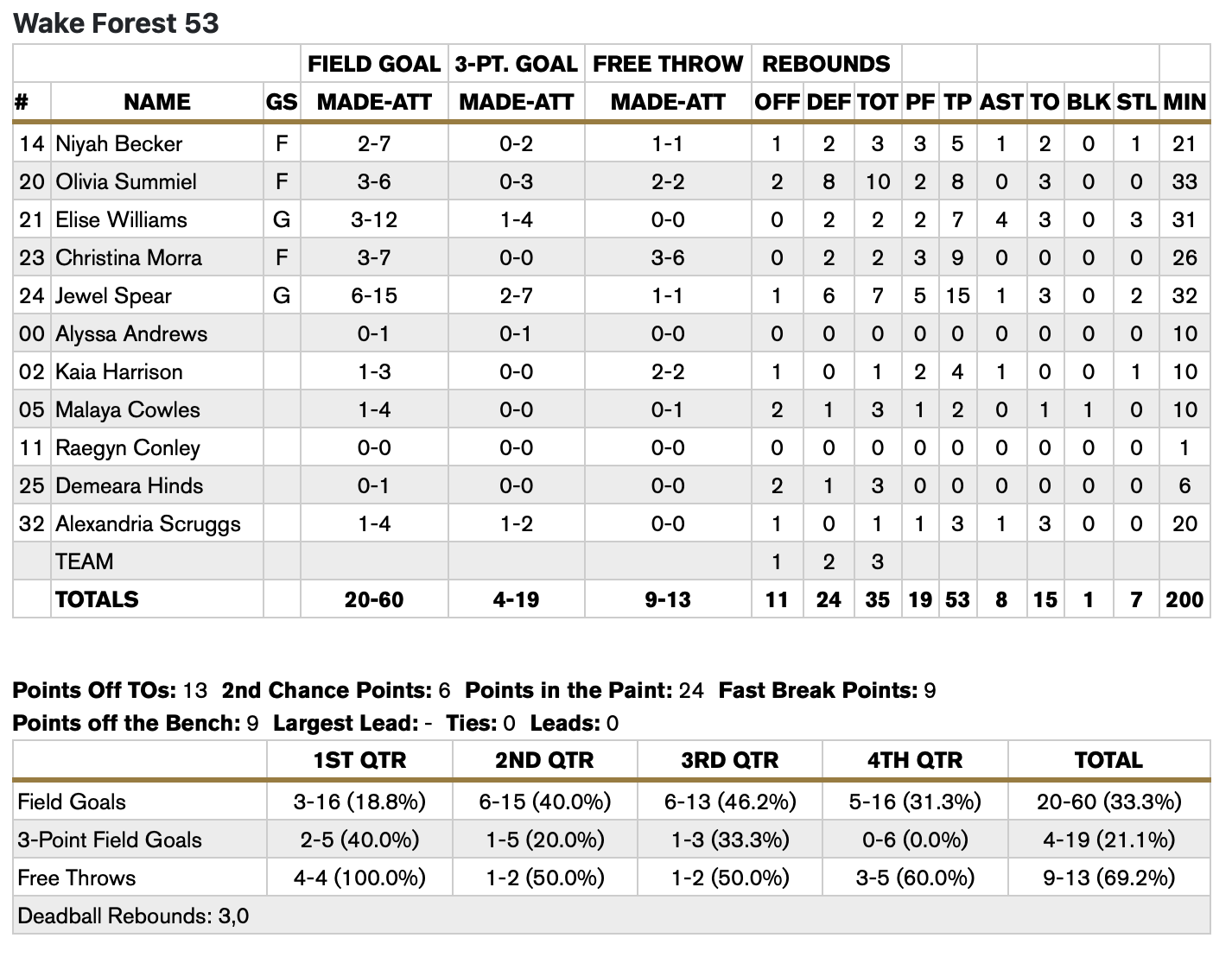