With 17:55 to play in the second half in a packed Cameron Indoor Stadium, a Keve Aluma layup gave Virginia Tech a 42-34 lead over No. 2 Duke. To that point, the Hokies were three-for-three to open the half, had 40% from the floor and held freshman phenom Paolo Banchero to three-of-nine shooting.

Tech was in control. The Blue Devils, led by Wendell Moore at that moment, lacked a presence inside. On the other hand, the Hokies, having just shot 40% from behind the arc in the first half, seemed to understand that an opportunity was on their hands.

Then suddenly, out of nowhere, the switch flipped for Duke and the lightbulb came on. Mike Krzyzewski’s team, trailing by eight, strung possessions together. Over a five-minute span, the Blue Devils went on a 13-0 run on six-of-eight made baskets. Meanwhile, Virginia Tech missed seven straight shots, including five three-pointers.

Duke retook the lead and never trailed Virginia Tech again on its way to a 76-65 win in Durham.

Banchero, who had a 7-0 solo run to kickstart the team’s hot stretch of shooting, finally turned it on. He finished with 23 points, 17 of which he scored in the second half. That gave the Blue Devils their swagger back, and they led by at least seven points for the final ten minutes of the contest.

“[They] threw him the damn ball and got out of the way,” Virginia Tech’s Mike Young said of what changed for Banchero in the second half. “He was better on the offensive end of the floor.”

Banchero paved the way for the comeback, though Duke was really good defensively. Active, disrupting passing lanes, causing havoc. That contributed to the Hokies’ eight second half turnovers after giving the ball away just twice in the first 20 minutes.

Despite Keve Aluma (25 points) and Justyn Mutts (20) combining for 45 of Tech’s 65 points, Banchero & Co. wore Tech down. The Blue Devils were deeper, more physical and really made life difficult. They combined stops with made baskets at the other end and did what Coach K teams do best: Push the pace.

Tech was very disciplined defensively in both halves, but for a stretch there, Duke got everything it wanted. Banchero was the catalyst.

What a pass by Paolo Banchero to Trevor Keels. Need to see more of this from Paolo pic.twitter.com/JvZcgq3t25

By the time the Hokies blinked, Duke had taken back the lead and was up five. Hunter Cattoor hit a three out of a timeout that gave Tech its first basket in five minutes, but then the Blue Devils went on another run. A 9-0 stretch over 2:25 pushed the margin to 14, and besides a spurt of six straight points from VT around the 5:30-mark, the game was out of reach.

“I thought we continued to get exactly what we wanted offensively,” Young said. “Up four at the under-16. We got spread out a little bit and that can happen and then you’re getting dribbled under with Wendell [Moore Jr.] and [Trevor] Keels and Jeremy [Roach] and [Paulo] Banchero was… goodness gracious… throw the ball down to that guy. That was a pretty impressive performance from that young man.

“Wish we could have had a better outcome. … Duke played appreciably better than we did in the second half and the final score is what it is.”

Coach K’s team showed why it is No. 2 in the country. It’s a deep squad, evident by AJ Griffin’s 13 points off the bench.

Virginia Tech, which by most metrics is considered a top-four team in the conference, looked like one. It went toe-to-toe with Duke for 20-to-30 minutes and led at halftime in Cameron Indoor Stadium. Indeed, the final result was not a favorable one, but the Hokies showed promise.

Now, when will that turn into an ACC win? It’s the first time in Mike Young’s three seasons that the team has started 0-2 in league play. Virginia Tech seems prepared for this conference gauntlet, but there are so many chances at a high-quality win. At Duke was the first, and at North Carolina on Dec. 29 is the second. If Clemson hangs around, the Tigers may still be a Quadrant 1 opportunity in the season finale in March.

But the Hokies need an ACC win badly. The team has, at times, played better than its 8-5 record indicates, but the challenging schedule that Young set up paired with playing three of the top teams in the conference right off the bat doesn’t really help.

The Tar Heels, in Hubert Davis’s inaugural year, are 9-3 (1-0 ACC). They play an up-tempo style similar to Duke, rebound well and are a good three-point shooting team. Virginia Tech has another tough game on its hands, and a victory in the league in Chapel Hill can go a long way. Falling to 0-3 in the ACC, on the other hand, could really set back any NCAA Tournament hopes the Hokies might have.

“I think we did a lot of things well and made a lot of mistakes,” Hokies forward Justyn Mutts said, “so there will definitely be a lot of good film to look at for us to improve on for next game.

“They’re the second-ranked team in the country. For us to come in here and compete at a high level for a good duration of the game, I feel as though we definitely took a step in the right direction, we just need to keep marching in that direction and not just stop because we almost beat Duke. That isn’t good enough.” 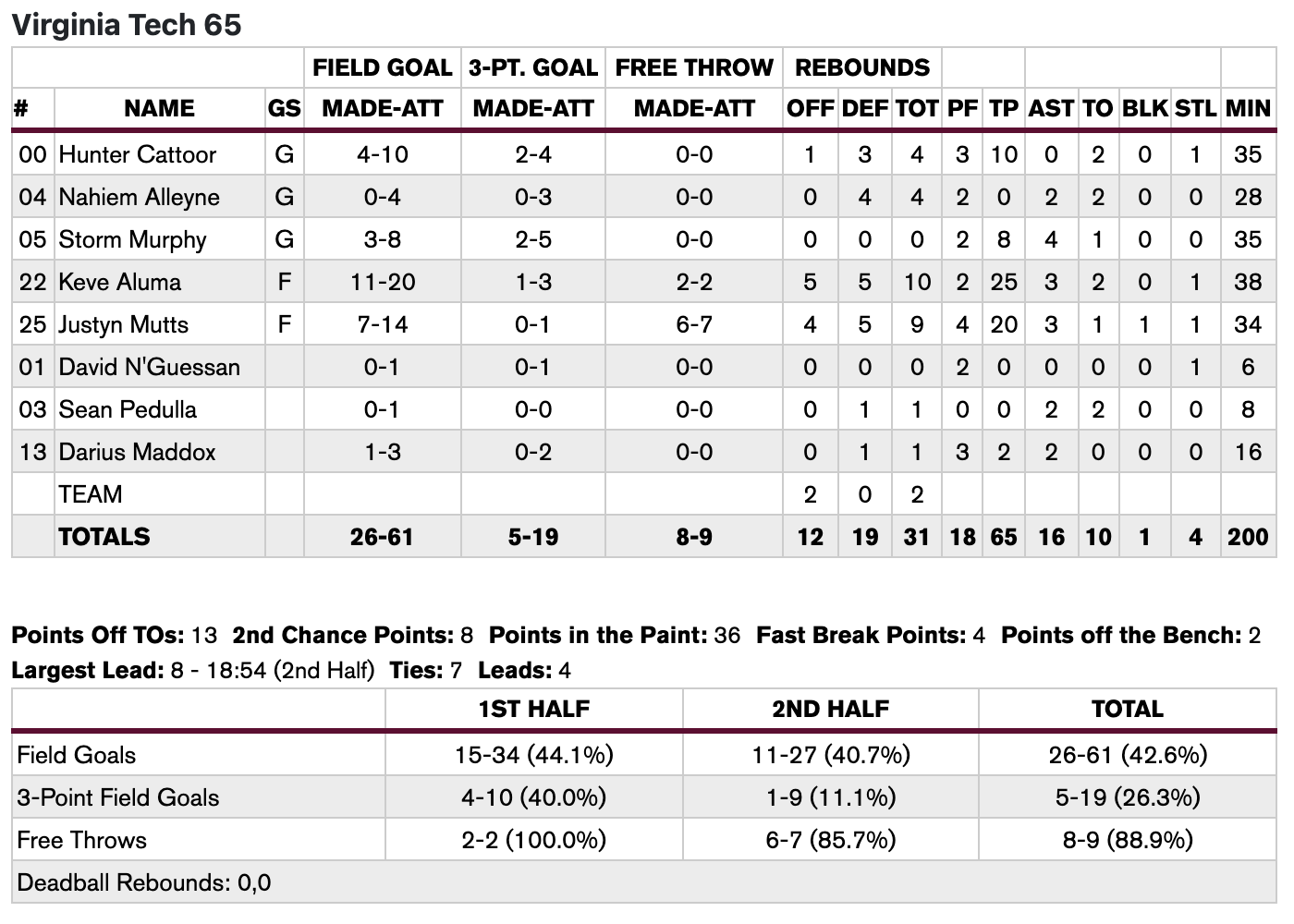