For the fourth time in the last six games, Virginia Tech got behind by double digits in the first half. And for the fourth instance during that stretch, the Hokies’ second half effort wasn’t enough, despite a late surge.

Against Memphis, Tech got down ten before halftime. Versus Xavier and Wake Forest, that margin was 11. On Sunday in front of over 13,000 fans at Dayton, the Hokies trailed the Flyers by 12 at one point.

Slow starts, in which the team doesn’t shoot well, has been a theme for Mike Young’s group. A team that starts three fifth-year seniors and two juniors and was picked fifth in the ACC is now 7-4 (0-1 ACC) after the 62-57 loss at Dayton.

“That was a disappointing beginning to come here and not play very well,” Young said afterwards. “Come in here [locker room at halftime] down seven, thought we were in great shape. Got Keve [Aluma] going a little bit to end the half, got some things going for us. And then bad response to start the half.

“Just not the kind of response you need in an environment like that and giving yourself a real shot to win.”

After Tech scored the game’s opening basket at the 15:31-mark, the Flyers dropped ten unanswered points. VT never led again. Most importantly, it took too long for Tech to find its groove, a frequent trend this season and one that carried over to the second half.

Dayton led by 12 with 2:45 left in the first half, but Tech slowly crawled back thanks to a 7-2 run. It was a seven-point game – 29-22 – at the break. But even after finishing the half strong, another lackadaisical start to the second period killed the Hokies.

It wasn’t until the Flyers led by 18 – they opened the second half with an 18-7 run over the first six-plus minutes – that the road team started to connect, and even though it pulled within five in three instances over the final six minutes, it wasn’t enough.

Dayton pressed early and often, which wreaked havoc. VT spent at least ten seconds on the majority of its possessions in the game on bringing the ball up the floor.

The pressure was especially evident over the 45 seconds (17:15-16:30) early in the second half when Virginia Tech turned it over three straight times before crossing the timeline. While those three gifts led to just four points, that stretch was an epitome of Tech’s performance.

“I don’t understand it,” Young said. “Bad start to both halves, and we have to get better there. Probably should’ve called timeout when it went to 11, I didn’t, and it got to 14, 15. We didn’t handle that part very well, didn’t get to spots.

“Expecting to win on the road, can’t have those kinds of mistakes. Can’t turn the ball over against the press, can’t have 11 assists and 13 turnovers.”

The Hokies fought their way back and brought the game within single digits thanks to their defense. Over a 7:30 stretch, they outscored Dayton 18-5 and allowed just one basket on nine attempts. That created an exciting five-point contest with 5:45 to play, despite Tech’s early struggles.

The Flyers sealed the deal, however. An 8-0 run with two minutes to go bumped the margin back to ten, and they cruised to the five-point win from there.

Entering the season, Young was worried about the defense, and he noted that if the offense was his biggest problem, he’d sleep easy. Looking at the last six games and omitting Cornell, Virginia Tech has played five top-100 KenPom team and struggled to score in each matchup.

“I thought we had some great ones [shots vs. Dayton],” Young said. “They’ve got some length and they fly around, but we had shots for the guys we want taking shots, just didn’t get them in the bottom of the hole. You need to make those shots on the road.

“Those shots, when they present themselves, you need to rise in the air and make the basket.”

Nahiem Alleyne, who led Tech in scoring last season, was poor offensively – 1-10 FG, 0-4 3FG. Despite finishing tied for a team-high 14 points (7-15 FG), Keve Aluma was two-of-seven in the first half. Justyn Mutts missed all four of his three-point attempts, was two-for-five from the free throw line and just three-of-nine from the field, even though he finished with eight points.

Even outside of the win/loss category, the Hokies have struggled in all aspects on the offensive end against teams that are larger and lengthier. Aluma has missed easy shots around the bucket, wide open threes just haven’t dropped, and the lack of ball movement has led to droughts. Tech has struggled to slash to the rim, while the inside-out game seemed to disappear at times through the first 11 contests.

“It really is [surprising],” Young said. “We’ve got to get this thing figured out. … That’s quite frustrating, quite perplexing. Again, through 11 games. We’ll get it squared away.”

The slate doesn’t get any easier.

Young & Co. travel to Charlotte on Friday to face another old A-10 friend, St. Bonaventure. After that, they play Duke and North Carolina on the road in the ACC. Then they’re back home on New Year’s vs. Pitt before league play really takes off.

This is Virginia Tech’s most challenging non-conference schedule since joining the ACC in 2004. Young wanted to challenge his group, and he’s done that. Hindsight is 20/20, but his team simply hasn’t performed up to his, and many others’, expectations.

It was a highly anticipated game before, but the Bonnies are now a team the Hokies must beat. Falling to 7-5 ahead of the conference’s richest of blue bloods could put the Hokies at .500 to end 2021 and down 0-3 in league play.

Tech’s been on the go since Nov. 9. With four days off, there’s not a better time for the team to work out kinks, tweak strategies and find its identity. If that doesn’t happen, the program’s NCAA Tournament hopes could be in jeopardy.

“I think [we need to work on] the whole ball of wax,” Young said. “Too much standing, not enough ball reversals. Too much on the floor and those are all concerns when you see a team like Dayton that gets into you and makes it hard.

“We’ve got plenty to work on, and we need it [practice]. We’re a little dull, and just our schedule has dictated that. I look forward to getting back and really having a couple of good days of practice, at least Tuesday-Wednesday, without thinking about our next game.” 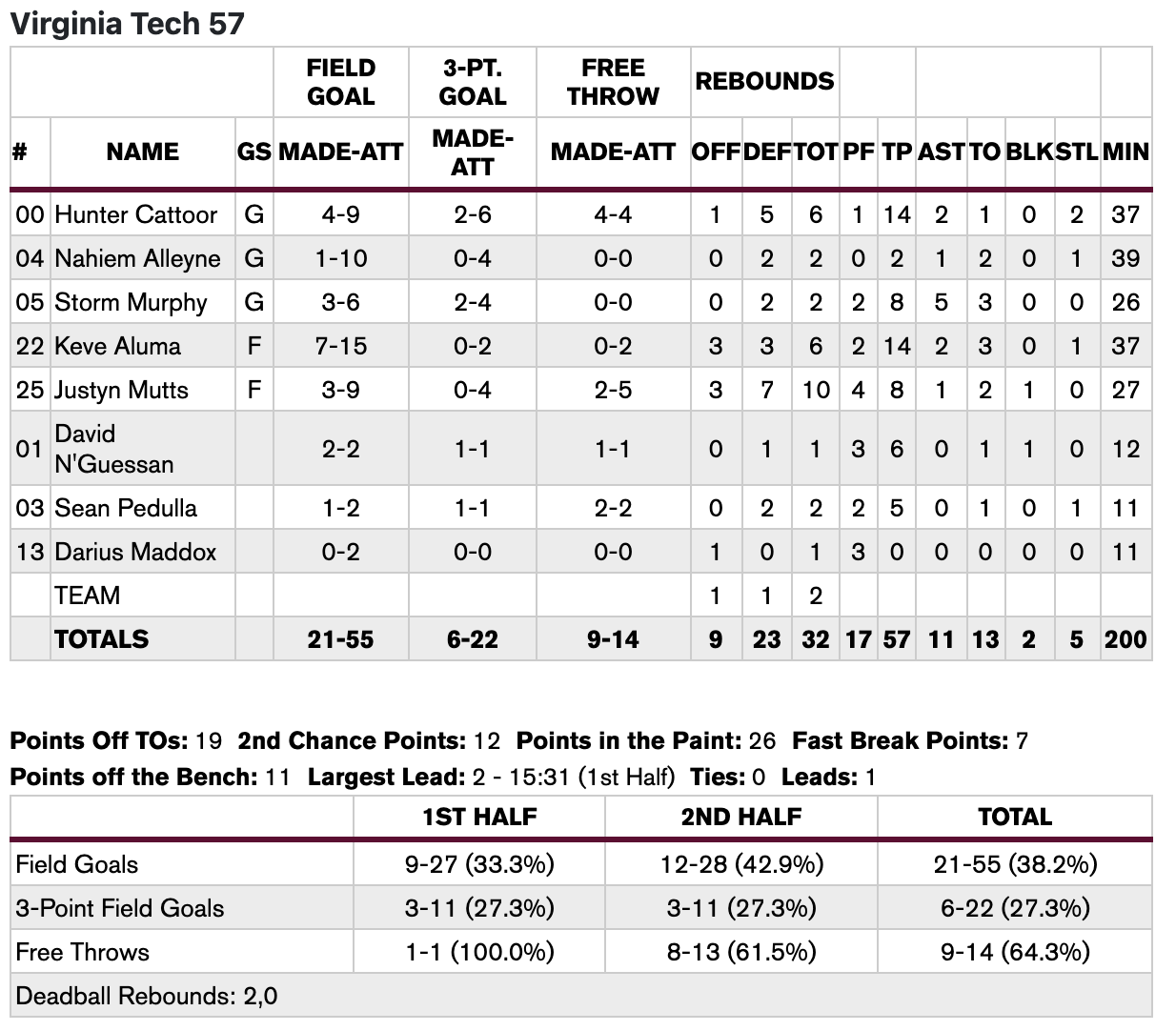 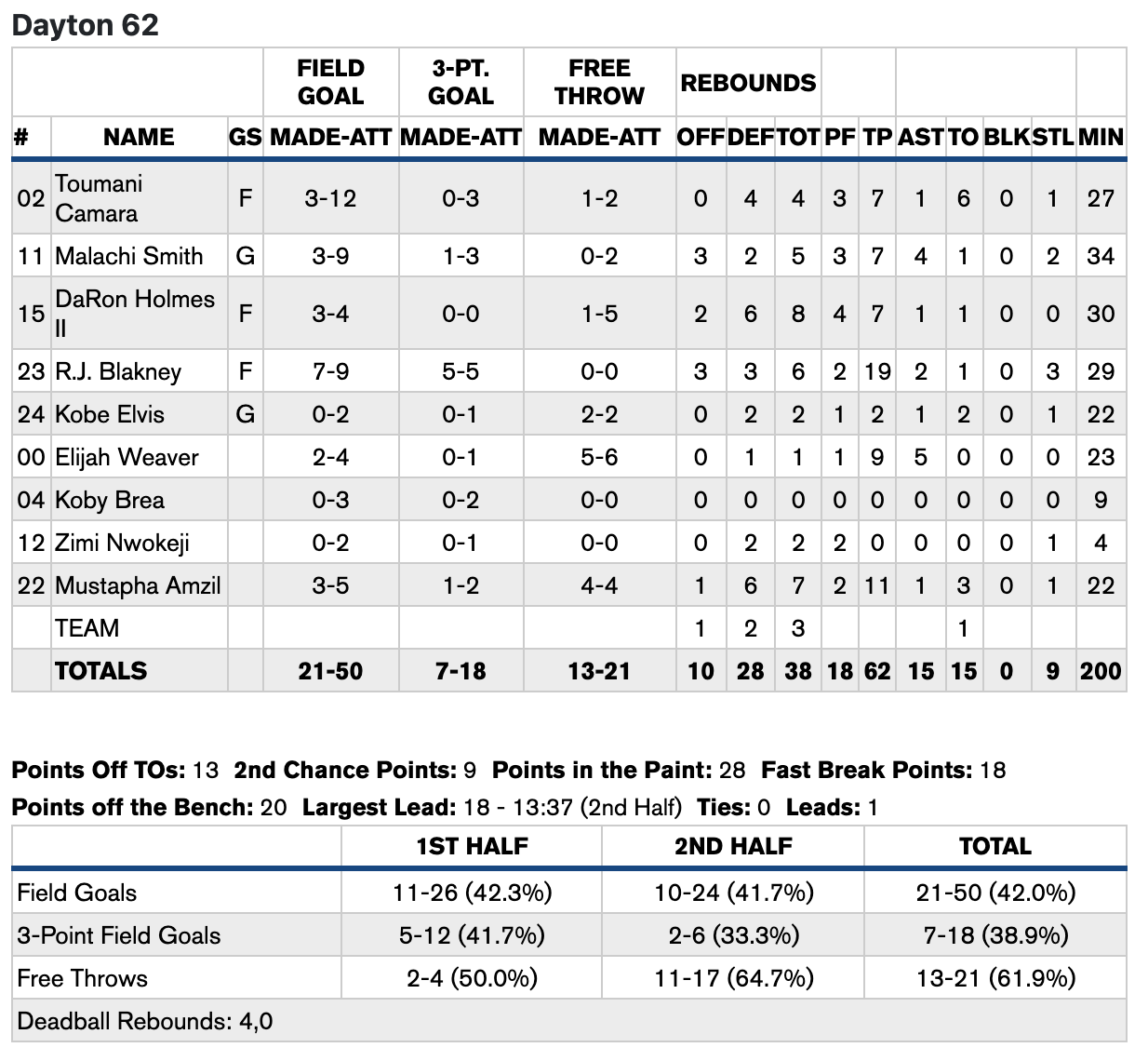