No. 25 Xavier and Virginia Tech battled down to the wire in the Barclays Center on Friday, a game the Musketeers pulled away with, 59-58.

“Hats off to the Musketeers,” Hokies head coach Mike Young said afterwards. “Travis [Steele] did a really good job with his team in some difficult circumstances. They still had [Paul] Scruggs who I admire so much. Nate Johnson is a very good college basketball player, as is [Jake] Nunge.

“It’s disappointing, but it is November and I’ve got smart group. I’ve got an old group that will respond and we’ll play better basketball as we move ahead.”

In the second half, the Hokies adjusted. They locked it down defensively, allowing just eight made field goals for Xavier on 38% shooting.

Tech grabbed more rebounds in the last 20 minutes (17-13), scored more points (31-24), forced six turnovers and only turned it over three times, and matched Xavier’s intensity. The effort came up just short, however, thanks to Nate Johnson’s three-point basket with :25 to play that sealed the victory. He finished with 30 points and was an impressive seven-for-11 from behind the arc, which is even more impressive considering the Musketeers missed four starters.

“We didn’t really have any plays in tonight,” Xavier head coach Travis Steele said. “We knew we were in unique circumstances with our roster and we played a lot of four guards, which we have never practiced before. We walked through some things during shootaround today because we didn’t know who was going to be available.

“Listen, you just find a way. We played slower on purpose. We purposely bled the clock during a lot of possessions because I knew we were going to need that defensive intensity for 40 minutes. You have to pressure Virginia Tech; otherwise, you just let them run their offense they execute at such a great level.”

The Musketeers were physical, and though not as big and tough as No. 9 Memphis was on Wednesday night, they were disruptive nonetheless. It started with frustrating Tech’s Storm Murphy.

The fifth-year point guard only had one turnover, but Xavier constantly pressured him, which threw the rest of Tech’s offense for a loop. The Hokies only turned it over eight times as a team, but their shot selection was more disrupted than anything. Murphy was 0-5 from the floor and sat for much of the second half with foul trouble, but Young & Co. seemed more relaxed, at times, without Murphy running point.

The two teams traded blows, and with Virginia Tech seemingly controlling the tempo and the game, it looked like the Hokies would win it at the wire.

Keve Aluma (12 pts, 5 reb, 37 min) made a layup with :45 that VT a two-point advantage. He missed his free throw, which had a chance to make it a three-point game. It was a well set-up play, though, with Cattoor dishing it to Mutts, who fired a pass into the lane to Aluma. He caught it, went up to the rim and got fouled.

Johnson came down the floor, however, nailed a three and Tech’s chance at the buzzer didn’t fall. Cattoor had an opportunity on an inbound pass but missed a runner in the lane, and a tip from Mutts as time expired bounced around and off the rim.

Xavier walked away victorious, 59-58, handing the Hokies their second straight loss on the season. In the end, Tech didn’t play well enough for 40 minutes on defense, was rattled by Xavier’s defense at times and didn’t hit enough shots to win.

“We’re not as good as we thought we were,” Young said. “We’ve got work to do. This could be the eye-opening experience that we needed. The trail doesn’t get any easier moving to College Park with the Terrapins, but we’ll be back.

“I’ve got a good team and this thing could take some peaks and valleys. This is an opportunity to grow and figure some things out.”

Maryland (5-1) awaits in College Park in the Big Ten/ACC Challenge on Wednesday. The Terrapins face Louisville on Saturday at 10 a.m. in The Bahamas.

I’ll be back on Tuesday with a game preview. 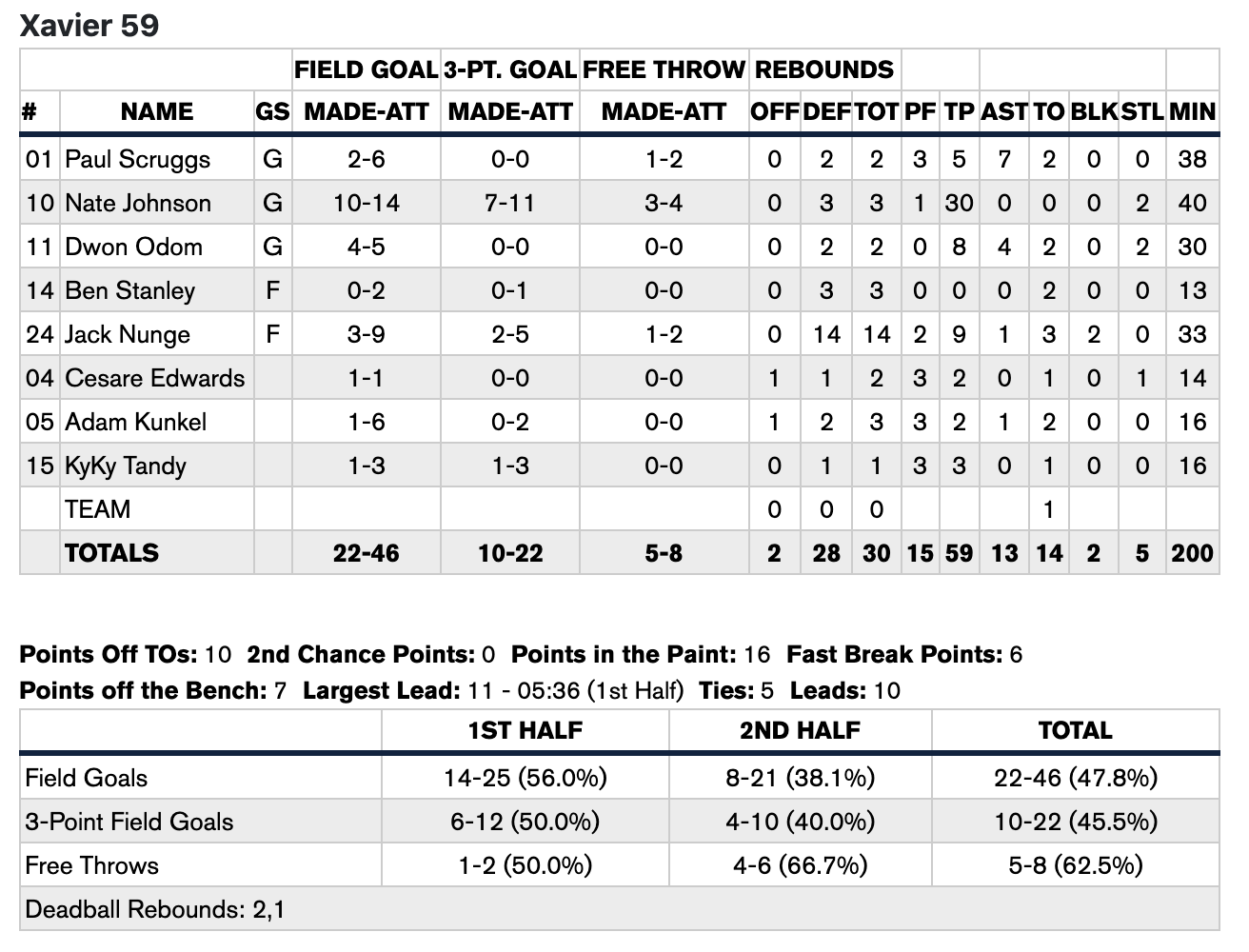 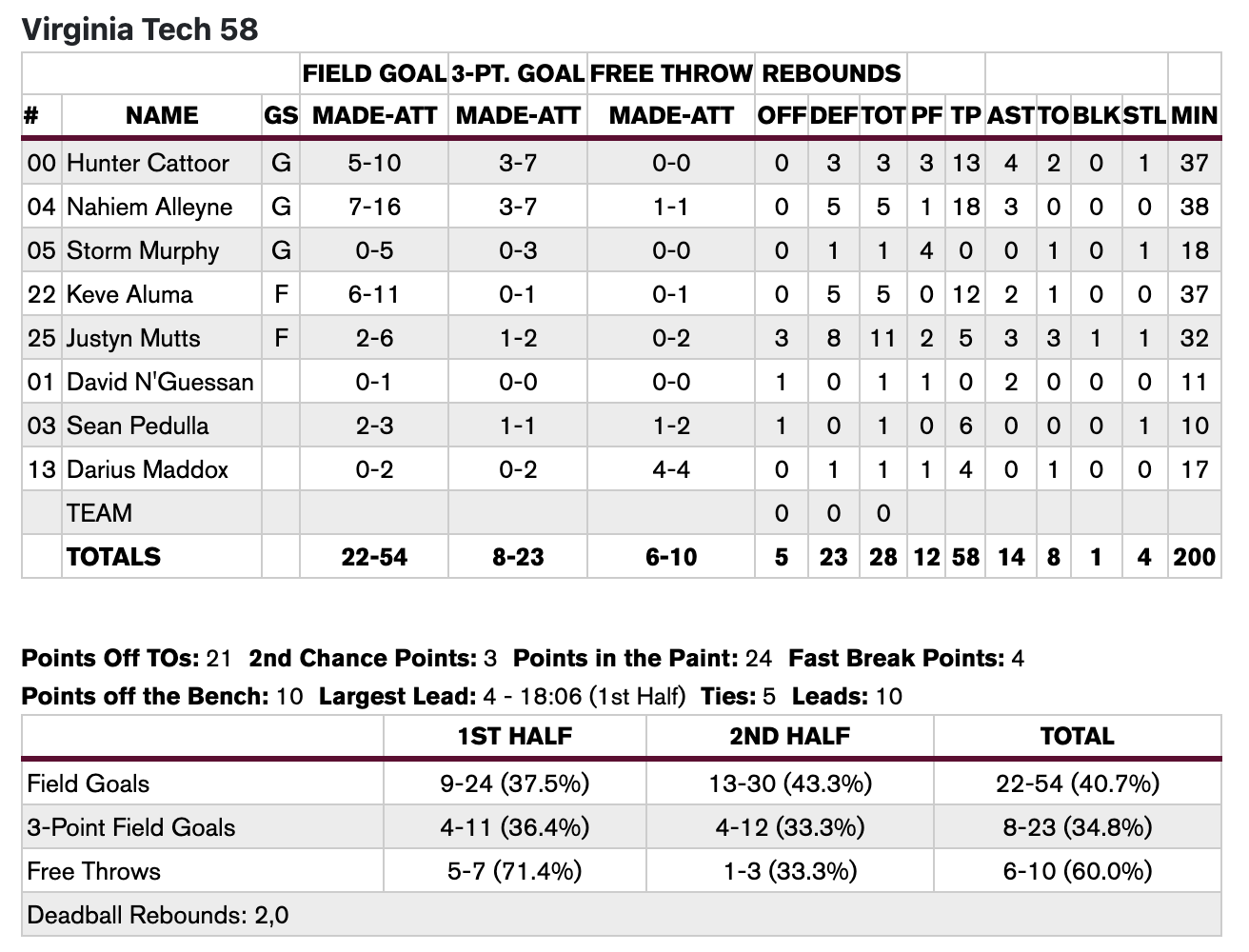