Virginia Tech travels to Brooklyn, N.Y. for two games in the NIT Tip-Off Tournament in the Barclays Center after starting the season 5-0. Tech blew out Merrimack in a 72-43 win on Sunday, the program’s 1,500th win. No. 9 Memphis is the first foe in New York, and it’s the rejuvenation of a once-frequent series.

The Hokies and Tigers have met 30 times previously, a series that Memphis leads, 18-12. It’s the first time that Tech and Memphis have played since the Seth Greenberg-led Hokies traveled to the southwest corner of Tennessee in March of 2005 for a second round NIT matchup. Jamon Gordon (16 points) and Carlos Dixon (13) paced Tech in the 83-62 loss.

Two former league rivals, Memphis and Virginia Tech were companions in the Metro Conference, which the Tigers were a charter member of, from 1979 when the Hokies joined, until the league dissolved in 1995. 22 of the 30 meetings all-time came when they were Metro foes, a 13-9 record in favor of Memphis.

It’s only the second time ever that the two programs have met on a neutral court. The lone previous occurrence was a Metro Tournament game in Louisville, KY in March of 1981. Tech won that game 72-66, led by Dale Solomon’s 25 points and seven rebounds. 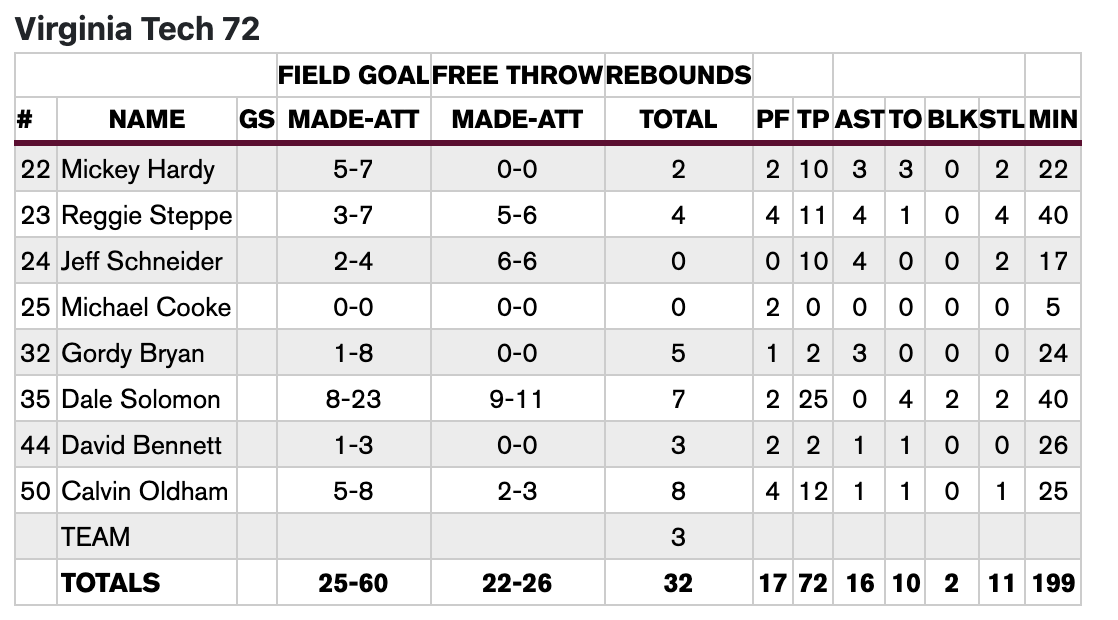 Tech is 2-14 all-time at Memphis. The first win came in the first-ever meeting back in 1976, while the second win was the last meeting in Memphis as Metro colleagues in 1991.

There aren’t many college basketball coaches that had a more successful playing career than Penny Hardaway.

A Memphis alum, Hardaway led the Tigers to two NCAA Appearances, including a trip to the Elite Eight, from 1991-93. Orlando selected him with the No. 3 pick in the 1993 NBA Draft, and he had a 14-year career in the association. He played for the Magic, the Suns, the Knicks and the Heat over the course of his career, and he represented the U.S. in the 1996 Olympics in Atlanta, where they won gold.

Hardaway has won 20-plus games in all three seasons, too. He’s recruited well – Memphis had the No. 1 recruiting class in 2021 – and hired smart and experienced assistants, like Larry Brown and Rasheed Wallace.  One of the biggest things that stands out is Hardaway’s defensive rankings at Memphis.

Here’s a breakdown of a few of the Tigers’ defensive stats – adjusted efficiency, effective FG%, 3P% and 2P% – from the last four years:

“Coach Hardaway’s teams have been exceptional defensively,” Mike Young said after Tech’s win over Merrimack. “Again, I don’t know a lot about them [yet] but they are No. 3 nationally right now in something that I pay particular attention to with regards to those types of things. I know they’re very long and aggressive.”

Memphis hasn’t played an extremely difficult schedule so far this season, but it’s a bit more challenging than Virginia Tech’s. Here’s a breakdown, with each school’s KenPom ranking in parentheses:

One of the first things that pops off of the page from box scores from the Tigers’ games is their turnover numbers. Memphis played 14 guys against the Billikens. Out of the 11 that played at least five minutes, 10 players recorded a turnover. The Tigers finished with 24 for the game, and Saint Louis scored 27 points off turnovers.

It was a similar story against the Hilltoppers: 26 turnovers, and 25 points off turnovers. Here’s a quick breakdown of their turnovers by game:

On the flip side, the Tigers force a lot of turnovers – 80 through four games this season. WKU had 25, while Saint Louis had 14. As Mike Young teams do, Virginia Tech has taken care of the ball well, for the most part, so far this season. Games with eight or nine turnovers against Maine, Navy and St. Francis pleased Young, but 15 against Radford was more than they usually allow.

Sloppy turnovers like Tech had in its first five games aren’t going to cut it against Memphis. If the Hokies can have a sub-10 turnover game and control the pace, it will take away a lot of opportunities in transition for the Tigers, which they’re good at. They had 28 fast break points against Saint Louis.

The other thing that stands out is how efficient Memphis is, particularly in the paint.

Hardaway’s bunch has shot 50% or better in three of its four games, and the one they didn’t against WKU, they still hit 47% from the field. In their last two games, they scored 42 and 48 points in the paint.

In the Hokies’ test against Navy, the opponent with the best frontcourt through five games, the Midshipmen scored 30 down low.

Virginia Tech’s defense is pretty solid, too. Memphis will be an excellent test to see how often Young’s group can stop teams that are loaded with talent, like they’ll see in the ACC later this season.

Memphis’s starting lineup, minus one small change, has remained the same through its first four games. Here’s the five, with their statistics from Friday’s game vs. Western Kentucky:

The WKU game isn’t a good example of what Emoni Bates, the No. 5 recruit in the country in 2021, is capable of. It is a good example, however, of what Jalen Duren, the No. 6 recruit, can do.

Players in the nation averaging 15.0 points, 10.0 rebounds and 4.5 blocks per game this season:

The Tigers’ core is a mix of two really talented youngsters (Duren and Bates) combined with three experienced players in Lomax, Williams and Quinones. What does that mean?

Well, the Tigers are likely turnover prone and more susceptible to lapses, or at least the two rookies. Virginia Tech, which will start three fifth-year seniors and two juniors, clearly has the experience advantage.

Memphis is lengthy, as Young mentioned, but that size will play a factor on the offensive end. The Hokies have a lot of depth in the frontcourt, and don’t be surprised if they have to rotate through some of it more than usual against this Tigers team that starts three players 6-9 or taller. Expect to see John Ojiako and David N’Guessan get some important minutes.

That also means that Keve Aluma needs to stay out of foul trouble. The Hokies can’t afford to lose one of the top players in the ACC because of a few silly fouls.

Across the board, Memphis is on and off from three – 50% vs. Tennessee Tech and 47% vs. Saint Louis, but 13% vs. Western Kentucky. The Tigers rebound the ball well – they rank eighth in D-I in offensive rebound percentage – and push the pace more than anyone else in the country. Hardaway & Co. rank second in adjusted tempo, per KenPom, behind Charleston.

“I think they’ll want to play really, really fast, and we’re not geared that way,” Young said. “We can’t play that way and expect to win. They’ll want it in the 80s, 90s, we’ll want it in the 60s. It’ll be a test of wills, and our ball handling is going to have to be on point.

“We’ve got our hands full, but it’s going to be a good college basketball game.”