Thirty of those 43 rushes (69.7%) came from the Hokies’ two quarterbacks, Braxton Burmeister and Connor Blumrick. Burmeister started the game and played most of the first half, with Blumrick subbing in on occasion. After Burmeister was sacked and fumbled early in the third quarter, however, Blumrick played the rest of the game.

How will Virginia Tech’s quarterback situation shape up this week against Virginia? We’ll discuss that, plus how Miami exposed the Hokies’ defense on big plays and how Brennan Armstrong and his receivers make UVa’s offense so dynamic.

Everything ran through Virginia Tech’s quarterbacks at Miami.

Blumrick and Burmeister were first and second on the team in all-purpose yards with 132 and 52, respectively. Burmeister completed 14 of his 17 passes for 109 yards and a score, too, while Blumrick – who had thrown the ball just four times entering Saturday – was five-for-11 for 39 yards and two touchdowns.

With the importance of Tech’s QBs established, how will the team handle its QB situation in its final regular season game at Virginia?

“We are going to decide whether it gives us the best chance to win, like we did last week,” Price said in his press conference on Monday. “Both Braxton and Connor did a lot of good things in the game. [Offensive coordinator Brad] Cornelsen and the offensive guys will determine that later in the week.”

Here are the stats for the two QBs from the Miami game:

It’s especially impressive for Blumrick after he suffered an injury back in early October against Notre Dame. He sat out a month and rehabbed, and he played a big role in the Hokies’ plan of attack against Miami.

“I think what it did for us is Connor gave us a shot of energy,” Price said. “Here’s a guy that probably could have rode it out and not played the rest of the year, but instead he goes out and attacks the rehab, gets his body right, gets him back to where he can perform and our kids saw that. Our kids saw him go out, and every run he was trying to finish.

“They [Blumrick and Burmeister] both bring different things to the table and our offense seemed to be clicking with Connor and we just rode the hot hand.”

We’ll see how Tech uses its quarterbacks against UVa on Saturday. Just like Miami, it could be a case of riding the hot hand.

The Miami game was a mixed bag for Virginia Tech.

On offense, the Hokies played well enough to win until they punted on all three fourth quarter possessions. Defensively, they started off terribly, allowing ‘Canes touchdowns on the first four possessions, but forced four punts and allowed just ten points after that.

J.C. Price hit the nail on the head after the game on Saturday:

“We thought that their offense was built around big plays, and if they didn’t get a big play, they’d have trouble scoring. If they had big plays, they scored. If they had to drive it, we had a chance to get off the field. That’s kind of a nutshell on defense.”

Tyler Van Dyke (19-33, 357 yards, 3 TDs) became the first opposing quarterback to put up over 300 yards passing on Tech this season, and he had two long scores that helped him reach that mark. He hit Brashard Smith for 75 yards in the second quarter and had a 55-yarder to Mike Harley in the fourth that sealed the game.

On Monday, Price said the defensive lapses came from breakdowns at every position, not just in the secondary.

“I would not sit here and put it on any one portion of the defense. We’ve got to play better on all three levels.”

Tech recorded five tackles for loss against the Hurricanes but did not have a sack. None of the TFLs – Chamarri Conner, Dax Hollifield, Keshon Artis, Jermaine Waller and Nasir Peoples had one each – came from the front four.

The Hokies are going to need to get pressure against UVa this week to slow that offense down.

In many ways, Brennan Armstrong seems unstoppable. He’s etched his name in UVa’s record books multiple times, and though his game against Pitt on Saturday was his first since his injury, he still threw for 487 yards (36-49, 1 INT) and three touchdowns.

He’s the only player in the ACC that has thrown for over 4,000 yards this season, and he’s averaging 404.4 yards per game. Armstrong has the third-most touchdowns (30) in the league, too, behind Kenny Pickett’s 36 and 31 from Sam Hartman and Devin Leary.

“The quickness of his release, the decision-making [stands out],” Price said. “He’s a dual threat guy, he can run. I know everybody knows he’s been banged up here the last few weeks, but he’s 6-2, 215-220. He’s a big, strong guy that you think he’s not going to be as agile as he is. He makes guys miss for being as big as he is and he can lower his shoulder if he chooses to and finish.

Armstrong’s receivers are talented, too. Three of them – Dontayvion Wicks, Jelani Woods (tight end) and Billy Kemp – have six or more touchdown catches this year. That list doesn’t even include Keytaon Thompson, their second-leading receiver with 899 yards this season.

Here’s a breakdown of their receivers so far this season, sorted by number of catches:

“He [Armstrong] has confidence in them, he’ll come out of his read and throw that thing back across the field and throw it up to those guys who are not only good athletes, they can run, but it’s just, the first thing that hits you on the screen when you watch their tape is just the length of those guys.”

The Virginia Tech secondary, which allowed its most passing yards of the season at Miami, is in for its toughest test of the year in Charlottesville. 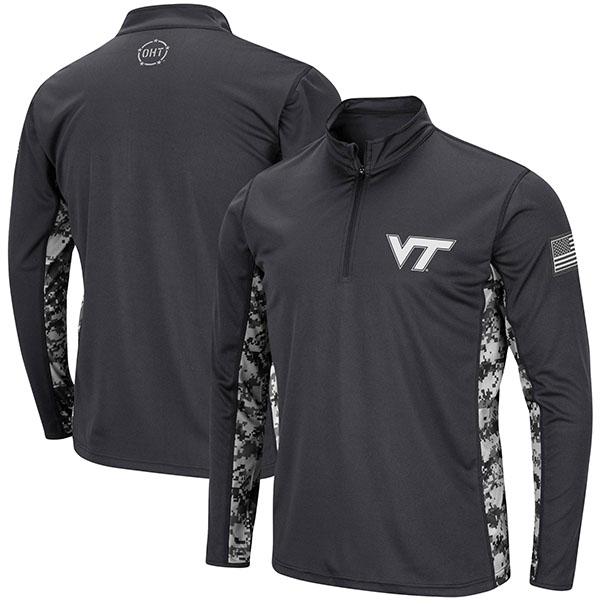