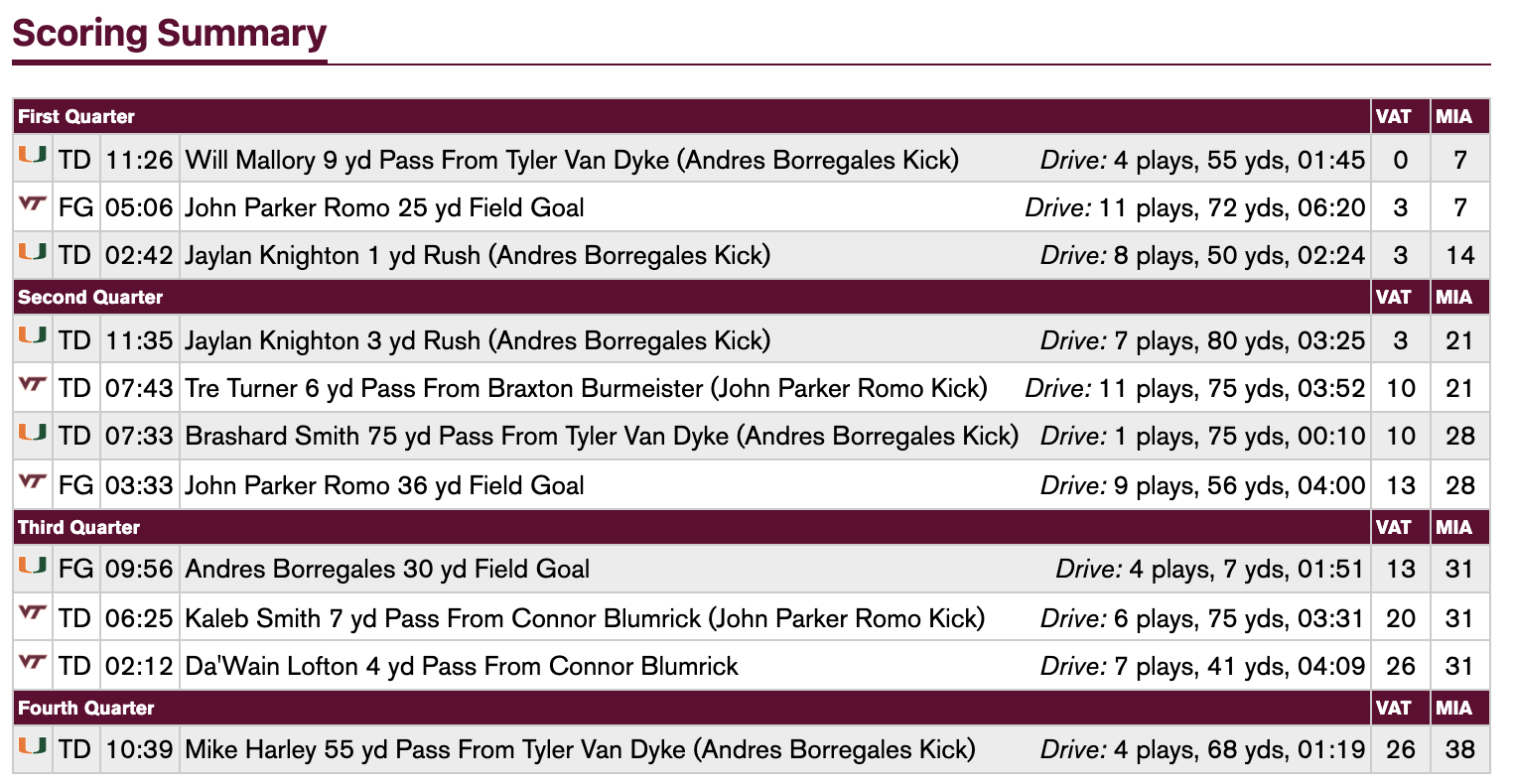 Despite coming out hot in the third quarter and trailing by five heading into the fourth, Virginia Tech’s effort wasn’t enough in its 38-26 to Miami in a rainy Hard Rock Stadium.

“We weren’t ready to play,” interim head coach J.C. Price said afterwards. “And that landed squarely on my shoulders, and there’s no excuse, there’s no asterisk by it. It doesn’t matter the situation. I’ve told them before the game started, I told them when the game ended: a loss is a loss. There’s not going to be an asterisk.

“I still love this team. I still like them. I like the fight. … Nobody flinched at halftime. It was probably still the middle of the third quarter, beginning of the fourth, we still felt on the sidelines like we were going to win the game. It just didn’t happen.”

Tyler Van Dyke completed 19 of his 33 passes for 357 yards and three touchdowns, including two scores of 50-plus yards. The ‘Canes put up 411 total yards and averaged 6.5 yards per play.

Brashard Smith’s 75-yard touchdown with 7:33 left in the third quarter extended Miami’s lead to 18, 28-10, and though Virginia Tech pulled back with two scores of its own, Mike Harley’s 55-yard house call sealed the game with 10:39 to play.

Van Dyke became the first opposing quarterback to throw for over 300 yards against the Hokies this season. The previous high this year was Middle Tennessee’s 283 yards. In ACC play, it was Syracuse’s 236.

“They’ve got very good receivers, and he’s a good quarterback that’s got really good arm talent and made some good throws,” Price said. “We knew going in, they’re a Miami team and they have great speed. And we thought that their offense was built around big plays, and if they didn’t get a big play, they’d have trouble scoring. And that held true.

“If they had big plays, they scored. If they had to drive it, we had a chance to get off the field. That’s kind of a nutshell on defense.”

Offensively, Virginia Tech kept pace once it got into the rhythm in the first half. At the intermission, the Hokies had a balanced offensive attack: 129 yards on the ground, 109 yards through the air.

Even though Tech came out firing after the break and made it a close game, it wasn’t a spectacular performance by any means on that side of the ball.

After Miami extended the lead to 31-13 with a field goal early in the third quarter, the Connor Blumrick-led offense drove 75 yards and six plays, culminating in a seven-yard fade to Kaleb Smith for six. “Saw ball, get ball,” as Smith said postgame.

Then, Price gambled. He said entering Saturday’s game, the staff thought there was going to be an opportunity for a “bunt kick, the surprise onside.” And Tech was right.

Just after the touchdown, John Parker Romo hit an onside kick that was muffed by Miami and recovered by Keondre Ko. Seven plays and four minutes later, Tech was in the end zone again, this time on a four-yard pass from Blumrick to true freshman Da’Wain Lofton, his first career touchdown pass.

“We see them every day put the work in,” Smith said of Lofton and Jaylen Jones making plays. “We know they can play at this level and go out and make plays for us. It’s awesome to see them have an opportunity to do that.”

Blumrick was a perfect five-for-five in the third quarter and Tech controlled the game, earning first downs on two-of-three third down scenarios.

After Miami scored quick – in 1:19 – on the 55-yard bomb to Harley, the Hokies trailed by 12, 38-26. However, needing a response, they couldn’t generate anything. They ran 13 plays – nine rushing, four passing – and gained 19 total yards. Blumrick didn’t complete a pass, and all three drives ended in punts from Peter Moore.

The ‘Canes got possession back with 6:17 remaining and ran out the rest of the clock, cementing Tech’s loss.

Tech was without offensive guard Lecitus Smith, who missed the game due to injury. Center Brock Hoffman played in spurts, while wide receiver Tre Turner played in the first half. He had a fabulous one-handed touchdown grab but reaggravated his injury from Georgia Tech, which forced him to sit out for the second half.

Blumrick and Braxton Burmeister shared duties behind center, but after Burmeister was sacked and fumbled with 11:47 to play in the third quarter, it was all Blumrick for the last five drives.

“We went with the hot hand,” Price said. “Blumrick, the offense was moving when Blumrick was in there. The threat of him being able to run and run physically, and we thought he was our best chance of moving the ball.”

Virginia now awaits on Saturday, Nov. 27 in the Battle for the Commonwealth Cup. A 3:45 p.m. ET kickoff on the ACC Network from Scott Stadium, the Hokies need a win to become bowl eligible. The Cavaliers lost to Pitt, 48-38, at Heinz Field, which clinched the Coastal Division title for the Panthers.

Quarterback Brennan Armstrong played, and he looked like his usual self: 36-49 (73%), 387 yards, 9.9 avg, 3 TDs, 1 INT. Five UVa players had a catch of 20-plus yards, too. After seeing what Tech’s defense gave up at Miami, playing Armstrong & Co. is a scary situation. The Hokies need this one, though.

“At this point, obviously we always want to go 1-0, but this one – yeah,” Smith said. “This one we’ve marked on our calendar for a while now. We don’t lose this one.” 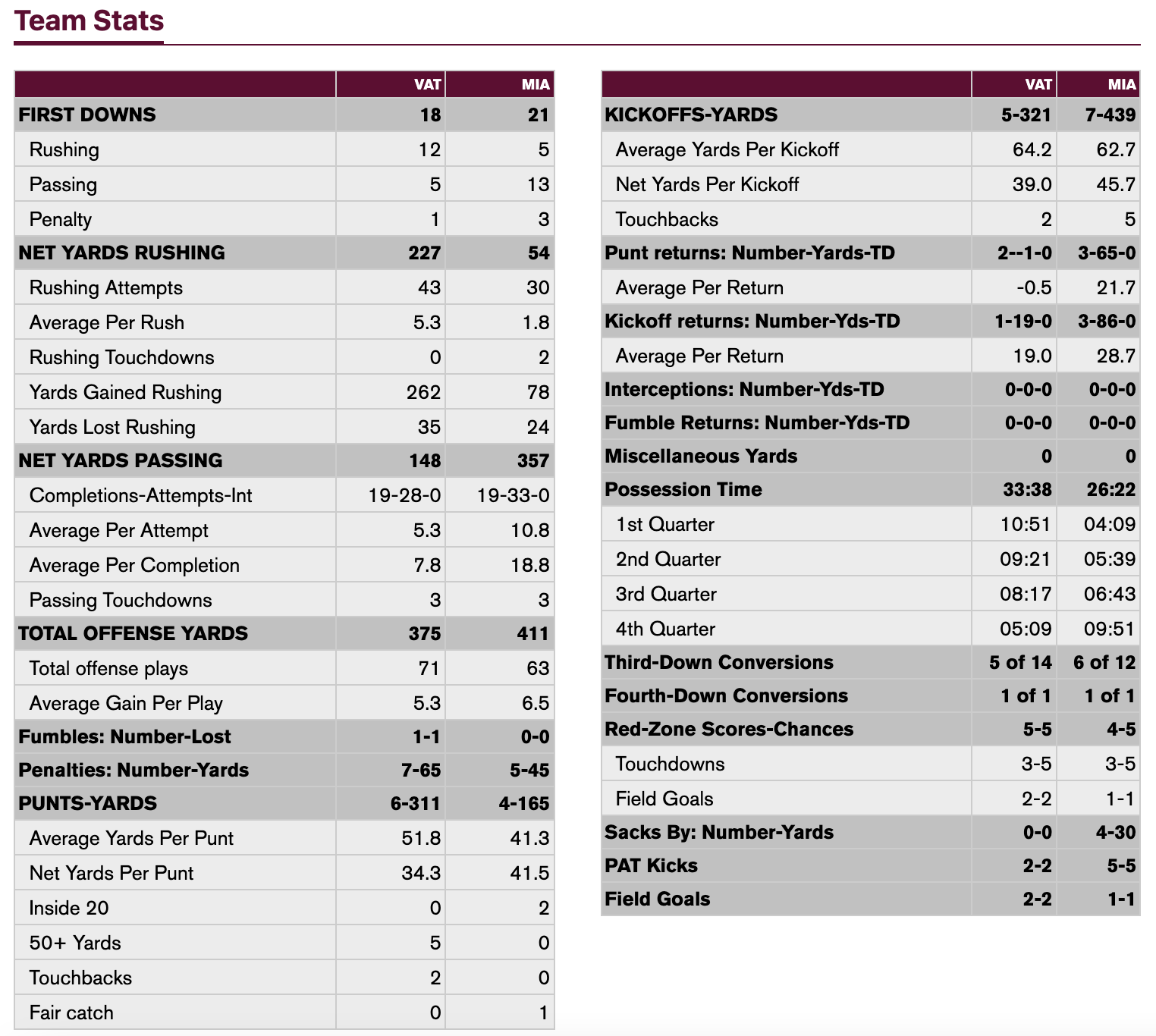 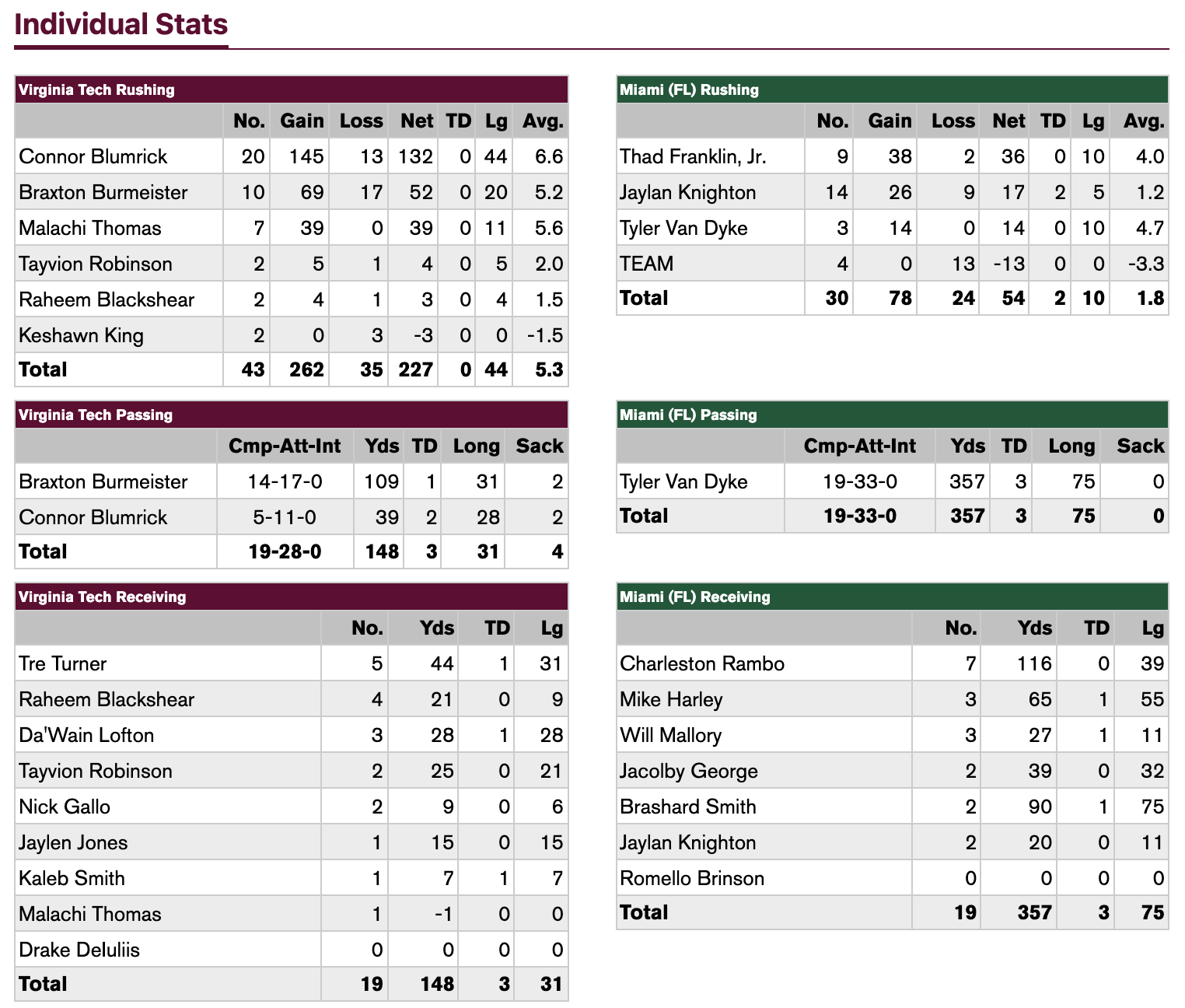 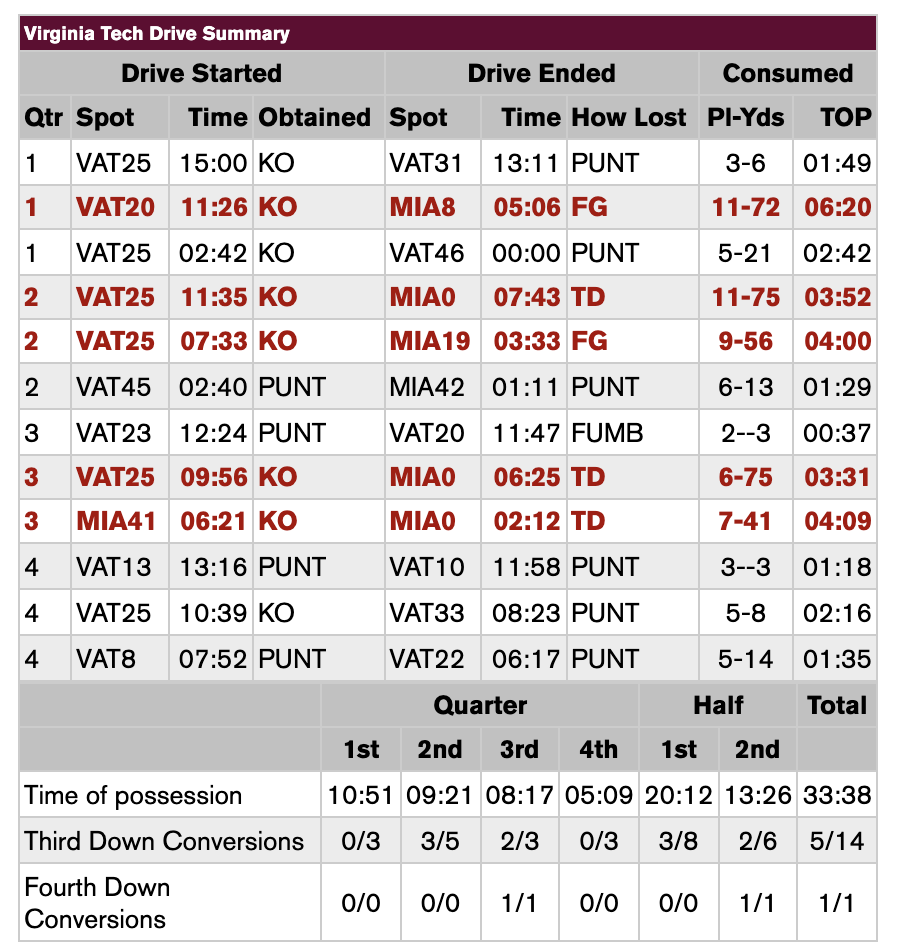 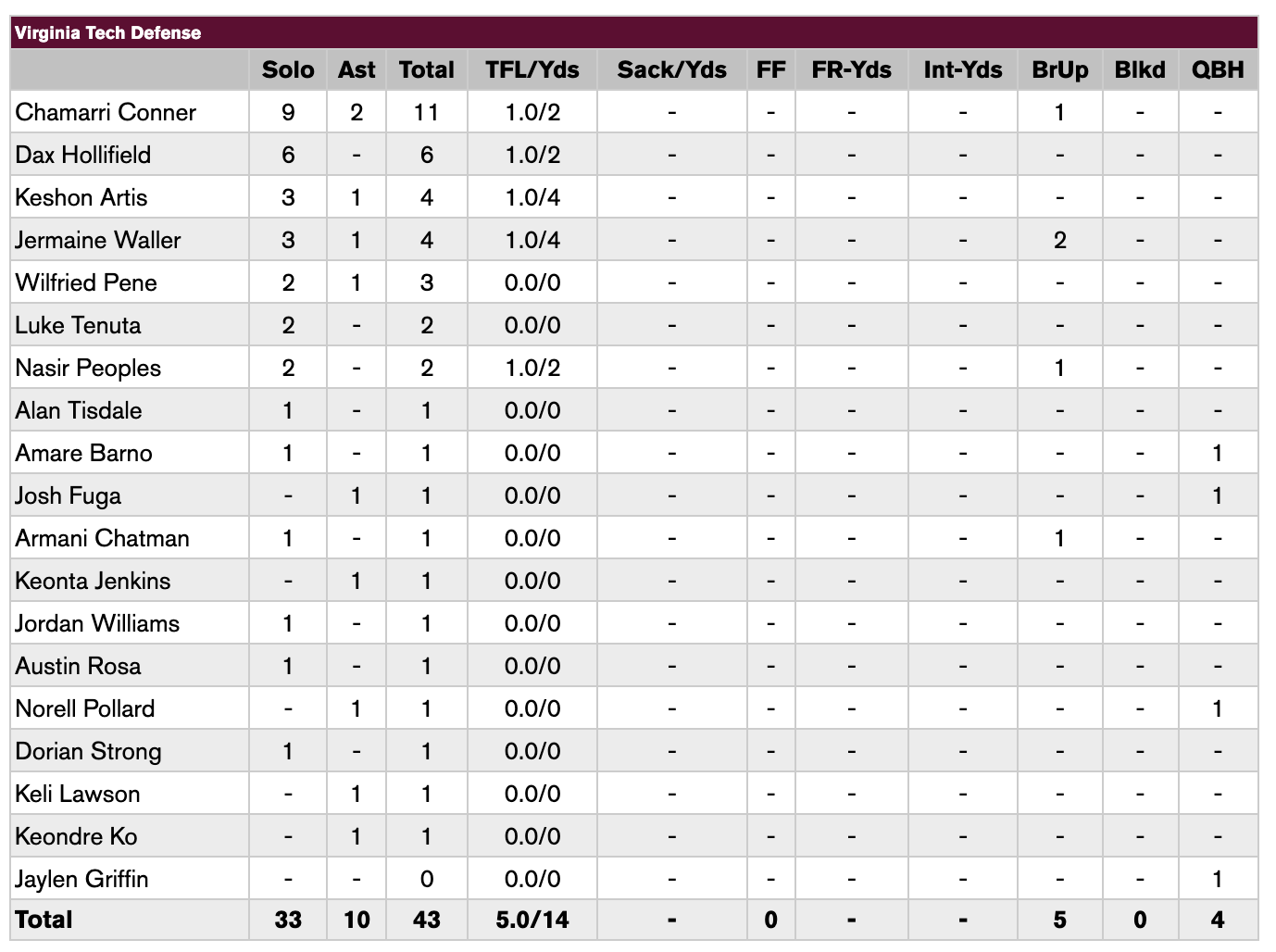