Aisha Sheppard shuffled her feet, jutted her fist forward and backward and nodded her head up and down. Her teammates Elizabeth Kitley and Georgia Amoore shared a laugh from a few feet away, while Lil Nas X’s “Panini” blasted through the Cassell Coliseum speakers. Though Virginia Tech huddled up leading by 18 points, there were seven minutes left in the first half and it already felt like garbage time.

Sheppard skipped back out on the floor, readying to put Campbell away before half concluded. The rest of the half — and the next one — looked just as good as the first 13 minutes, if not better.

No. 25 Virginia Tech (5-0) beat down Campbell (2-2), 84-39, on Saturday evening in Cassell Coliseum for another resume-filling, stat-sheet-stuffing win.

“Overall, I thought it was a pretty good performance,” head coach Kenny Brooks said. “We used this game to see certain rotations and certain combinations out there. … Liz [Kitley], obviously, played very well on the offensive end. [Sheppard] was [Sheppard], and it was good to see Georgia [Amoore] get going offensively. We’re still trying to figure some things out.”

In the win, the Hokies scored at least 80 points for the third consecutive game. The second half became more of an offensive exhibition than a competitive contest, for Tech at least. It featured three-pointer after three-pointer, guard Kayana Traylor driving into the paint and drawing contact multiple times, and a couple of mammoth blocks from the 6-foot-6 Kitley.

“Our team mindset is that we have to play the full 40 minutes, not go on [bad runs] offensively or defensively, and be locked in the whole time, because if we do that,” Kitley said as her voice trailed off. “We’ll be able to beat teams by 60.”

Through five games, Virginia Tech hasn’t had much trouble scoring the basketball, nor has it had trouble defending it. It has avoided a close game — or even a tough loss — that could derail its season. Saturday was no different.

“[Campbell] took a lot of three pointers, but they also missed a lot of them,” Brooks said. “We did a really good job defending their shots and securing rebounds.”

When the Hokies lined up for the National Anthem along the free throw line before the game, there was a noticeable silence. The Highty Tighties weren’t there to perform the anthem, and with classes paused for break, most students left for home, meaning the student section was less full.

It was almost a stark contrast to Wednesday night’s atmosphere, where more students packed into the building.

But the lack of noise didn’t seem to bother VT in another non-conference win, which Brooks scheduled as more of a “tune-up game” before the Hokies head to San Juan, Puerto Rico to take on Missouri State and UT-Martin, both of whom are predicted to win their respective conferences.

A tune-up game it was, forcing Campbell into taking bad shots at the end of the shot clock and making the Camels play more physically after drawing 25 free throws. Virginia Tech played much of the game in transition and on the break after out-rebounding its opponent, 47-20.

And in the game’s final minutes, Kitley and Amoore stood outside another Virginia Tech huddle, watching the highlights of the team’s rout played on the video board of the Hokies’ white jerseys dribbling and shooting their way past black ones.

The two shared another laugh before returning to the huddle. If Virginia Tech keeps playing the way it’s playing, the two will likely share a lot more moments like that down the road. 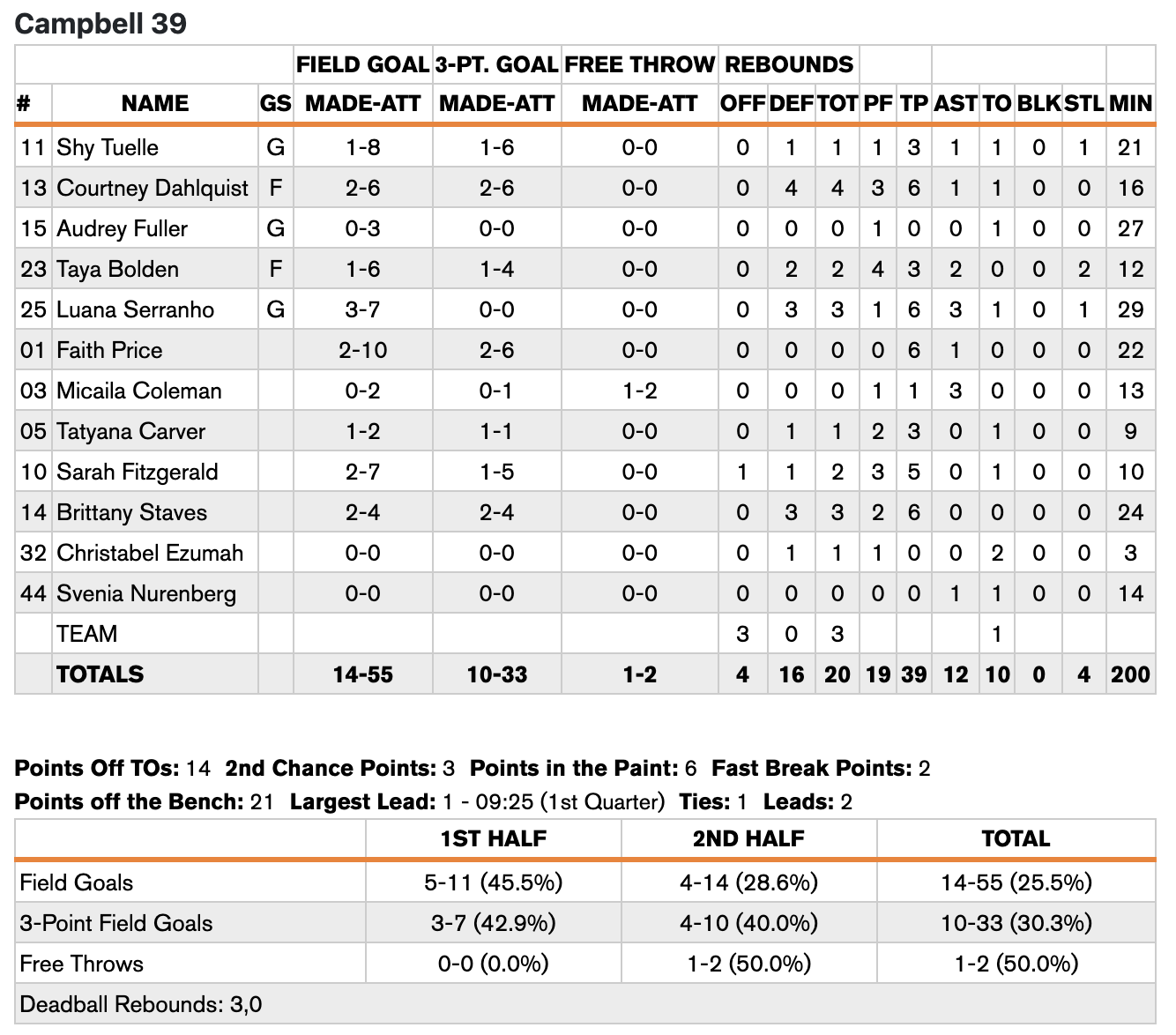 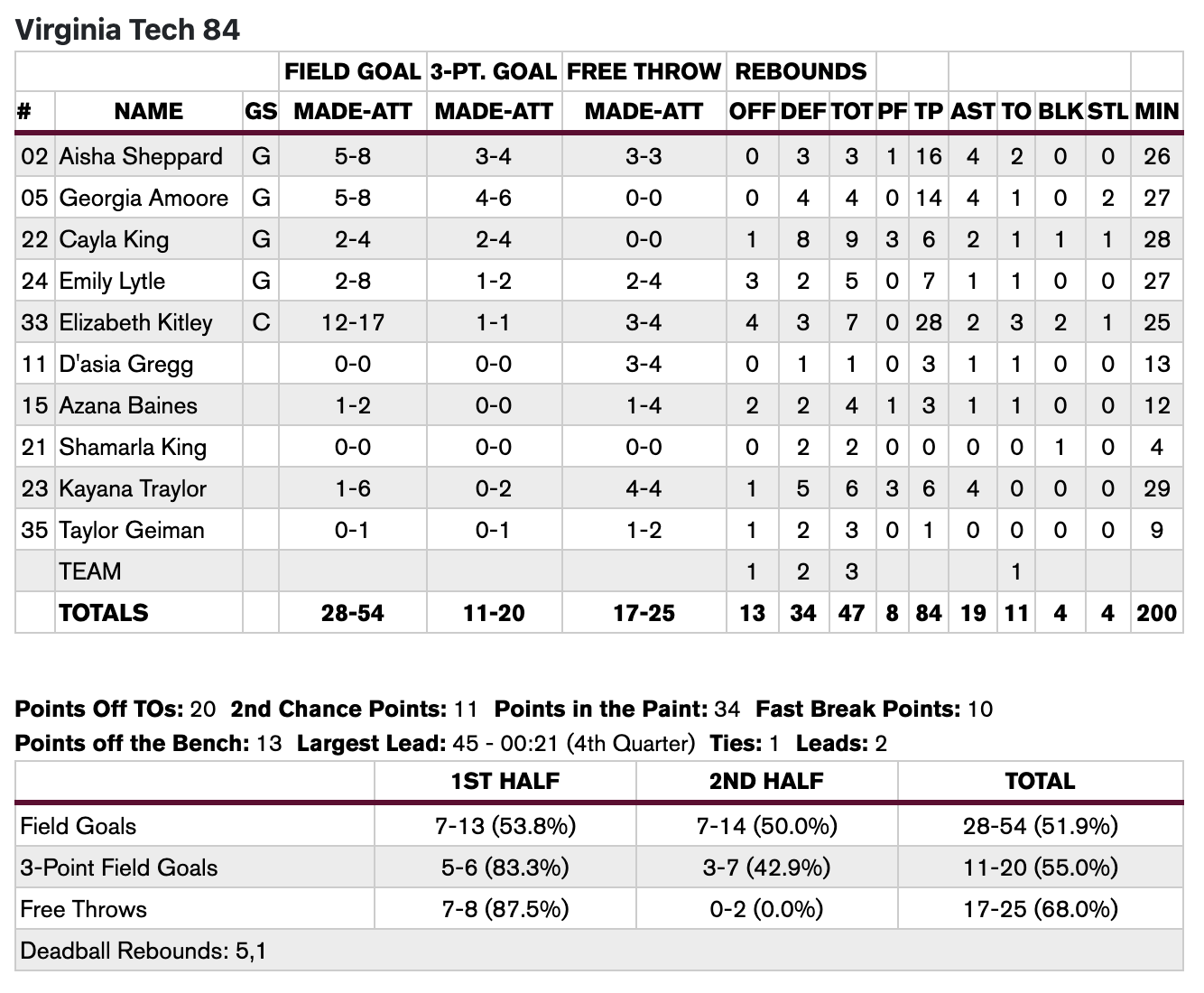