Just like its last game out against Radford, Virginia Tech had a sluggish start in the first half against St. Francis (PA). But in almost identical fashion, the Hokies found their stride in the second half in the 85-55 victory.

“They [St. Francis] guarded us unlike I don’t think anyone else will guard us,” Young said. “They went under a lot of stuff and stymied us. I was just so surprised with how they were guarding us. Shots were coming easy and they started to press a little bit. All of them.

“We limited them to 33% I think from the field, we outrebounded them by a significant margin, our turnovers were down, 14-8, so we’ll take it.”

Young’s bunch got plenty of good looks in the first 20 minutes. In fact, Young told them they better not pass up on an open look or he’d pull them from the game. Tech just missed some open shots, making 38% of its field goals.

After the break, a switch flipped, and the Hokies rarely missed, hitting 65% of their attempts. It wasn’t anything more than just making the shots they missed in the first half.

“There was not one shot in the first half that I questioned,” Young said. “I thought our shot selection was good and I want us taking the same shots, rhythm shots, after an extra pass, and if you turn one down, I’ll take you out of the game. Let it fly, and we did a much better job in the second half.”

In all honesty, it wasn’t bad basketball from Young’s bunch. The Hokies (4-0) took care of the ball and shared it well, dominated on the boards, got to the free throw line and were dominant defensively. The effort was there, too. It was just that finishing touch, the shot hitting the back iron and bouncing in an unfavorable direction, that limited Tech in that first half.

Once the Hokies began to knock some shots down, they found their confidence and St. Francis (1-2) couldn’t hang around. It was all kickstarted by an 11-0 run over the final three minutes that took the Tech lead, which was just one point, to 12 heading into the break. The Red Flash never got closer than that again.

“We were 10 [assists] and 15 [turnovers] against Radford, which was embarrassing,” Young said. “Much better tonight, much better. I thought we had the sequence, Murphy to Aluma, extra pass to Maddox to end the half to get that thing up to 12 from nine, it looked like Virginia Tech basketball, or what I hope it’s supposed to look like.”

Nahiem Alleyne and Keve Aluma paced Virginia Tech with 18 points each. Aluma’s scored in double figures in each of the last three games, including a season-high 20 at Navy, but Alleyne had been quiet, especially after an 0-6 (0-2 3FG) shooting evening on Monday night against Radford.

It was Alleyne’s best night of the season so far, as he made seven of his ten field goal attempts (one-of-two from three), grabbed four rebounds, dished out two assists and didn’t record a turnover. Not surprisingly, he played the most minutes (30) out of any Tech player on the floor.

“He was in a little funk,” Young said. “He’s done that once or twice, freshman and sophomore year. You can count on him to continue to work at it, stay in the gym, and work his way out. … He’s going to be fine.

“Now, there was a time in his career where it would affect other areas of his game. He doesn’t do that anymore, he continues to guard. He’s the best backcourt defender we’ve got and he’s really responsible and continues to do a good job in that regard, much to his credit.”

And after missing all five of his three-point attempts, Aluma didn’t necessarily stop attempting treys. Instead, he and the rest of his teammates worked their way down low.

That decision proved successful, as the Hokies scored 40 total points in the paint. Tech had a few dunks, while David N’Guessan finished with seven, John Ojiako had six and Jalen Haynes and Lynn Kidd each scored.

“Mutts, Aluma, Ojiako’s providing to be a very capable frontcourt scorer,” Young said. “Brought one down in the first half and they tied him up, but he’s a house, he’s a presence and doing well.”

Young was able to get his reserves a good amount of playing time, though part of his hand was forced due to foul trouble. The frontcourt rotation worked out well, however, and Aluma and Justyn Mutts didn’t have to play more than 25 minutes. Ojiako looked strong defensively, while Kidd and Haynes are raw, yet skillful.

Both Kidd and Haynes scored their first buckets in their Virginia Tech career, too. The two played a combined seven minutes, while Ojiako saw nine and N’Guessan had almost 19.

Darius Maddox showed out as well. The sophomore set a new career-high with 11 points, and he was perfect from the floor. He was four-for-four, three-of-three from deep, and grabbed three rebounds in 18 minutes.

Arguably the most impressive part from the way the Hokies have played their first four games is how they’ve held all four opponents under 40% shooting. The list:

“They’re responsible, they’re conscientious and they’re going to take what you give them and carry it to the floor,” Young said. “We spend an inordinate amount of time in our scouting and how we’re going to guard this action, that action, ball screen coverages. I’ve been quite impressed with their ability to take that on the floor.”

Until Thursday night, Virginia Tech hadn’t allowed a team to make more than four three-pointers in a game this season. The Red Flash had six, two more than Maine in the season-opener. Still, despite making six, St. Francis finished 26% from behind the arc.

Two other things that stood out were how well Tech took care of the ball and the frequent trips to the free throw line.

Against Radford, the Hokies turned the ball over a season-high 15 times. Young wasn’t pleased, understandably. It was only eight against St. Francis, and it was just three in the second half.

The team also got to the free throw line, too. Virginia Tech attempted its most foul shots so far this season (20), one ahead of 19 at Navy. Not getting to the stripe was another thing Young was frustrated about after the Radford game, but it was the opposite against St. Francis. Tech converted 16 of the 20 attempts, which is an 80% rate. Young can’t ask for much more than that.

“I thought Radford was more physical than we were, certainly in the first half,” Young said. “We wanted easy, and nothing is going to be easy.

“We were coming off a good win, on the road, at Navy, and fought and Radford beat us up a little bit to some cuts and were physical off of our screens and kind of threw us out of whack a little bit. But they [Tech players] are smart and wise and figured it out in the second half, as they did tonight, and did quite well.”

With the win, Virginia Tech turns its attention to Merrimack, who ventures from Massachusetts to Blacksburg on Sunday afternoon. The game is a 4 p.m. ET tipoff on Regional Sports Networks. Tech’s schedule gets more difficult afterwards, too, with Memphis, Xavier and Iowa State in the four-team NIT Tip-Off starting on Wednesday. 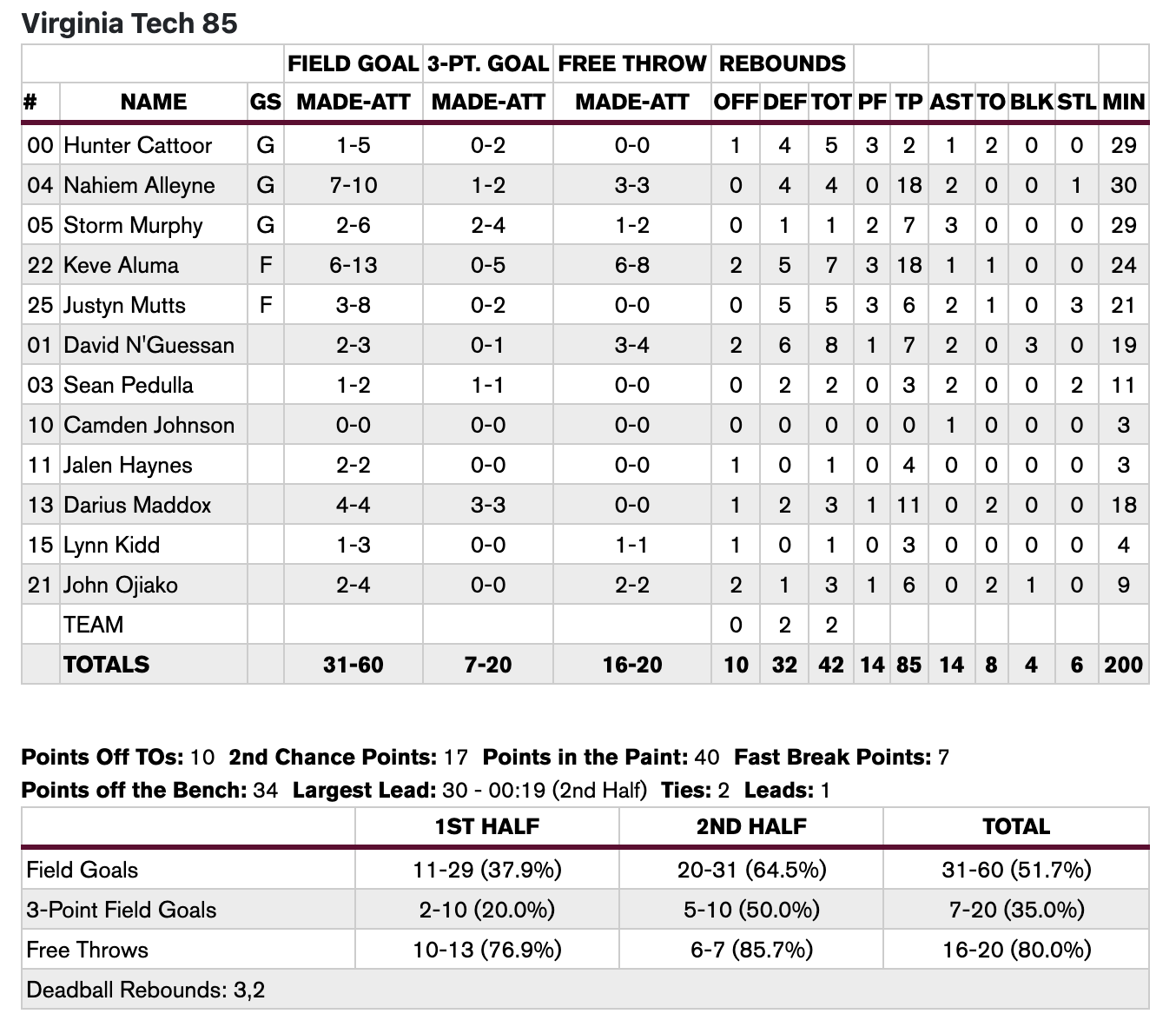 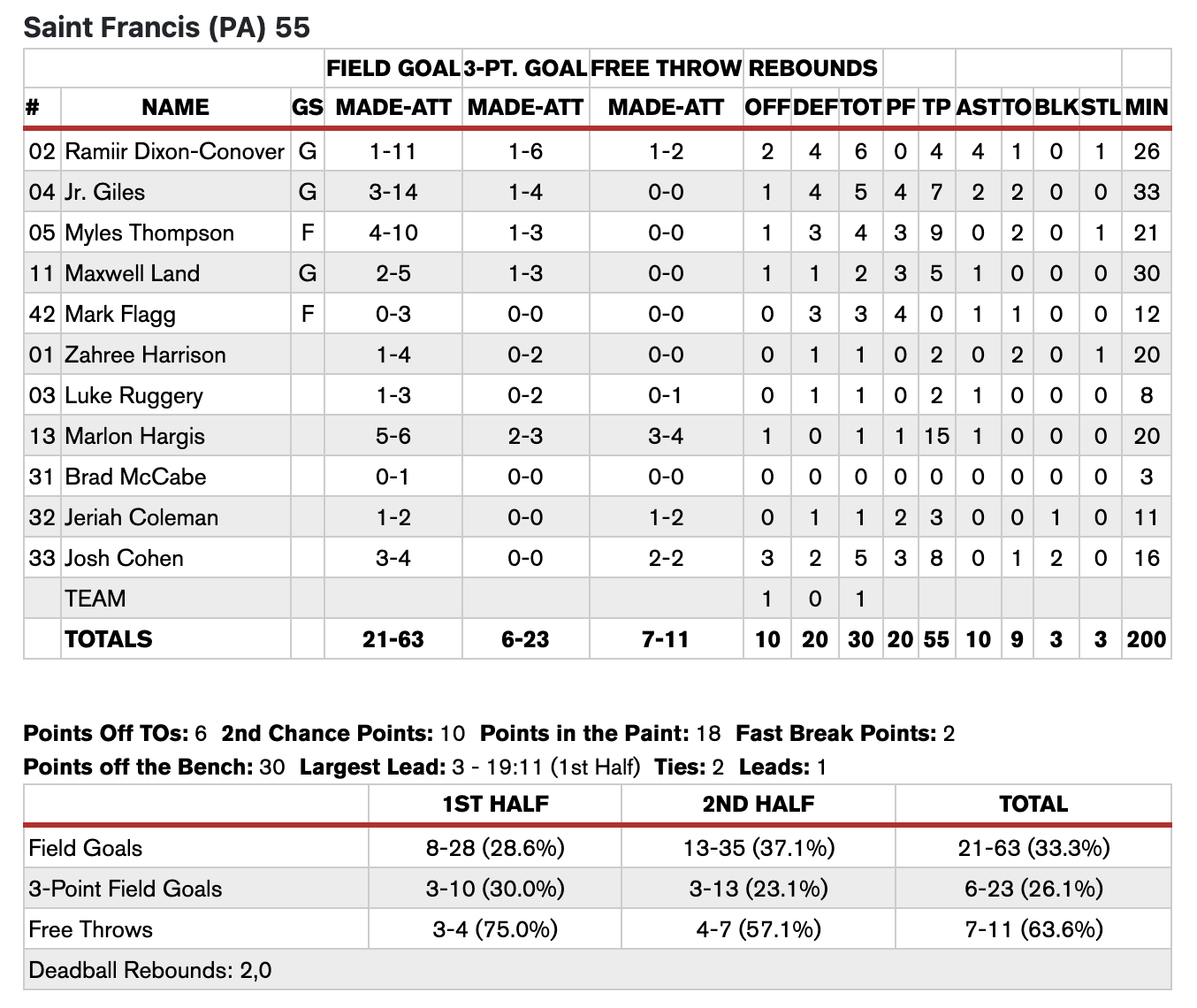