With close to 12 minutes to play in the second half and Virginia Tech leading by 13, point guard Storm Murphy brought the ball up the floor after a Radford basket.

The Highlanders had been pressing with a 1-2-2 trap for much of the evening, and Murphy got caught in a double team on the Carilion Clinic logo, right in front of the Hokie bench. Or so everyone thought.

Murphy quickly nutmegged one Radford defender, dribbling the ball between his legs. Then, he drove into the lane and lobbed an alley-oop up to a slashing Justyn Mutts, who tomahawk dunked it home, sending Cassell Coliseum into a frenzy.

Head coach Mike Young said if the nutmeg hadn’t worked, his head would’ve spun around like the guy from The Exorcist.

Young didn’t have to worry about that, however, because Murphy made the play. That was the highlight of the night for Virginia Tech, who improved to 3-0 on the season after a 65-39 win over Radford that came in not-so-pretty fashion.

“As tough and connected as we were defensively, I thought we were as disconnected and soft offensively,” Young said afterwards. “We only took six foul shots on the game, our assist/turnover is upside down, 10 assists, 15 turnovers. Not real pleased in that regard, but we did hold them to 39 points, we did hold them to 28 [from the floor]…”

“If our offense is my biggest concern, I will rest well tonight.”

Mutts and Murphy had similar comments, with Mutts saying he didn’t think Tech played a good 40 minutes of basketball. Murphy wouldn’t buy into the dialogue that Radford didn’t shoot well (what the stats indicated) because the Hokies forced them to. Moreover, he said the Highlanders just missed open shots, and Radford had more to do with how it shot than Tech’s defense did.

Are the Hokies being a little hard on themselves?

“I mean, don’t you have to be to be great?”, Mutts responded postgame.

It was an ugly and unimpressive game from either side for most of the way. At halftime, Young & Co. led just 25-18, and the two sides had combined for 17 made field goals and 15 total turnovers.

Lackadaisical passes or plays made to try to catch the ball happened multiple times in that first half. Neither team could shoot – 27% for Radford, 35% for Virginia Tech – and both were horrendous (a combined 4-25) from three.

At halftime, Young ripped into his team, which put added emphasis on taking care of the ball. The Hokies weren’t much better in the second half, turning it over eight times. There were 33 combined turnovers in the game and 21 total points off turnovers.

Tech made a concerted effort to not be lazy with the rock, though. It also helped that the team started to hit shots and outscored Radford 25-15 over the first ten minutes of the second half.

“I think realizing that we were making mistakes like that at halftime and trying to adjust and really just talking to the team about waking up a little bit,” Murphy said. “Man, we can’t be having those turnovers, that’s going to cost us this season. Virginia Tech’s not supposed to be a sloppy team. We’re supposed to be under ten turnovers every game to take care of it.

“We take pride in that and that’s something we did not do super well, and that’s going to happen, but as long as we learn from it and move forward, which we better do soon, we’ll be all right.”

Over a four-minute span from 14:17 to 10:06 in the second half, the Hokies, leading by just nine at the start of that frame, outscored the Highlanders 19-7. Murphy had nine of those points, while Darius Maddox had six, Hunter Cattoor had two and Mutts had that electric dunk.

“Just hanging on plays and elite-level communication,” Young said about his team’s defense. “I thought we were pretty good in that regard in the first half and we were contesting shots. I thought we were quite good in that area, throughout the game, honestly. I think they made eight threes on Friday night – I may be mistaken – and I thought we guarded pretty well.”

Only three players scored in double figures in the game, and all were Tech players: Murphy (17 points), Mutts (11) and Keve Aluma (10).

Murphy was exceptional, making six-of-seven field goals, four-of-five from deep. As he described it, he just needed to “break the seal a little bit.”

“He works at it all the time,” Young said about Murphy. “I’ve been with him his first two years, I know what he’s capable of. He had a good look about him, I thought his shot selection was good.

“I thought he made a three opposite our bench there in the first half that I thought he was going to dribble the life out of the ball and he finally stepped back and, in Murphy fashion, drains one.”

It wasn’t a great night, but the Hokies got the win over their New River Valley rivals. And, though not everyone contributed in terms of points, almost every player had a hand in the game one way or another.

Nahiem Alleyne had a rough shooting night, missing all six of his field goal attempts, but he grabbed four rebounds and had three assists.

Coming off the bench, David N’Guessan (seven points) added to the mix, scoring on three of his five shots and corralling three rebounds. Maddox, too, was good, scoring six points on two three-pointers. And though he didn’t record a point, John Ojiako looked solid on the boards, snatching five rebounds.

Two of the players and their numbers that stood out the most were Cattoor and Sean Pedulla.

A junior who started his third game this season, Cattoor only made two of his nine shots, including one-of-six from behind the arc. However, he grabbed a career-high nine rebounds, which is exactly what Mike Young preaches to his guards: crashing the boards.

“I would say that’s a really big emphasis with coach Young for the guards, going in there to get rebounds,” Mutts said.  “We need all of our guards getting rebounds because it’s clear that we’re not the biggest team in the country, so to have multiple people coming down helping with boards is going to help us big time down the stretch.”

Though Pedulla, the freshman from Edmond, Okla., played just eight minutes, he scored five points, stole the ball once and grabbed a board. He was also two-of-two from the field and made his one three-point attempt.

But unlike his first collegiate game on Nov. 9 in Cassell Coliseum against Maine, Pedulla looked calm. One can tell he is an intelligent and smart player, though young and raw. His development, shaping him into the No. 2 point guard behind Murphy, is crucial to the Hokies’ improvement.

Young said Pedulla looked like a freshman in his first game, like one would expect, but he broke Radford’s press effectively on Tuesday, didn’t flinch, made the right passes and took the shots the defense gave him. He hit on both, which is a bonus, and he didn’t commit a turnover. Young said he’s coming along well, and Murphy said he’s learned a lot from playing alongside Pedulla.

“He is [a smart kid], and there’s a level of trust that is continuing to develop with him,” Young said. “It takes me a little time with freshmen, point guards especially. He gave us some good minutes in that first half. … Pedulla is emerging here as a kid we can count on and expect to help us win.”

“It’s been incredible,” Murphy said. “I’ve learned so much, maybe even more than he’s learned from me, just playing and competing against him. He is so talented, he plays so hard and he’s brilliant. The IQ that he has is really going to have us in this season to come in and take care of the ball and make shots like he did tonight, and he’s so aggressive and physical.”

Murphy’s nutmeg and lob to Mutts stole the show in Cassell Coliseum, as did Murphy’s 17 points, a game-high. And though there were a few positives to take away, including the victory itself and improving to 3-0, the game in general was a disappointing performance that has the Hokies hungry to bounce back on Thursday vs. St. Francis (Pa.).

“Honestly, I can’t wait to get in here and watch the film because our team needs to take a big jump from this game,” Mutts said. “We won the game, but I don’t feel as our team improved today, so we can definitely get better.” 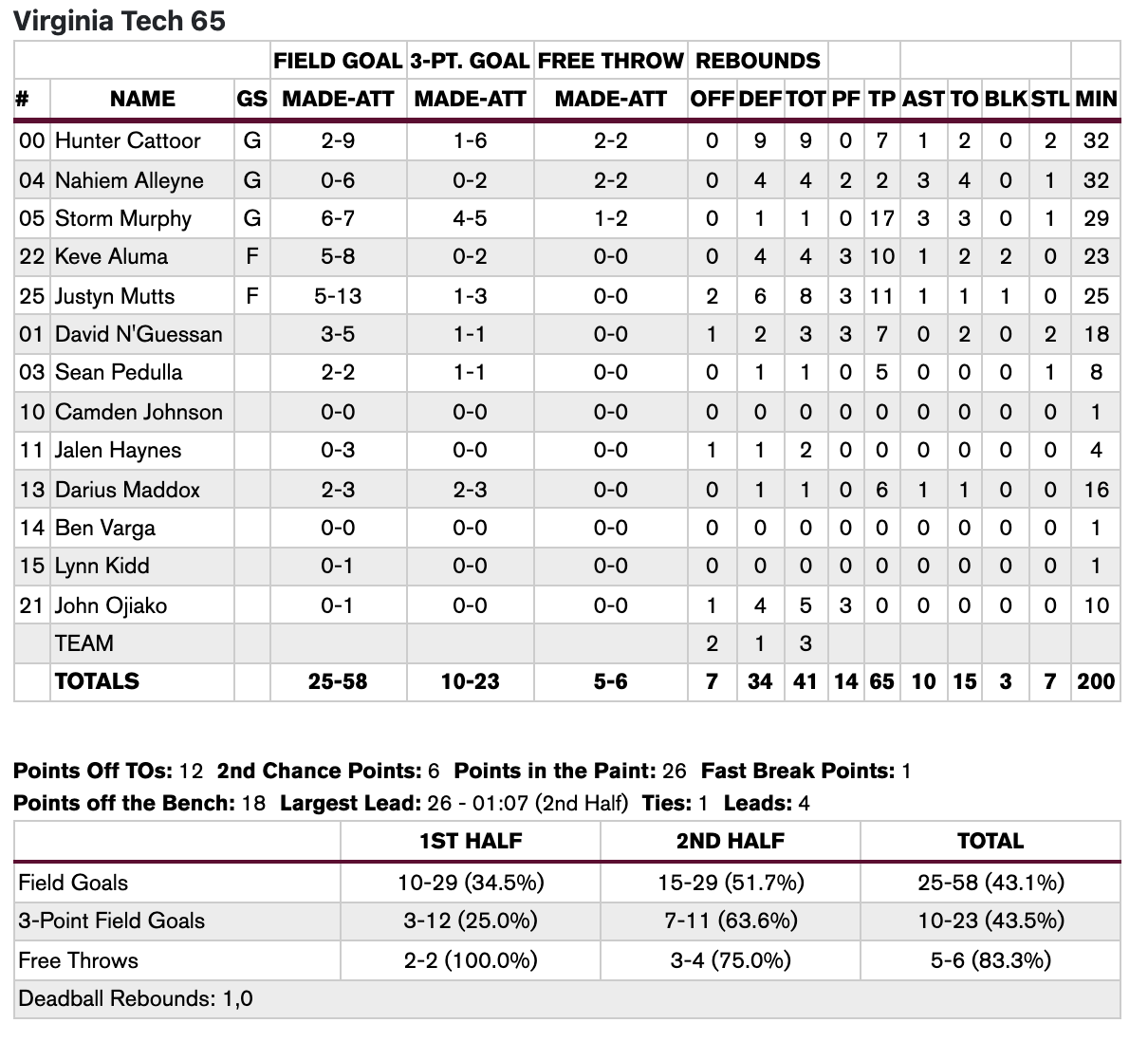 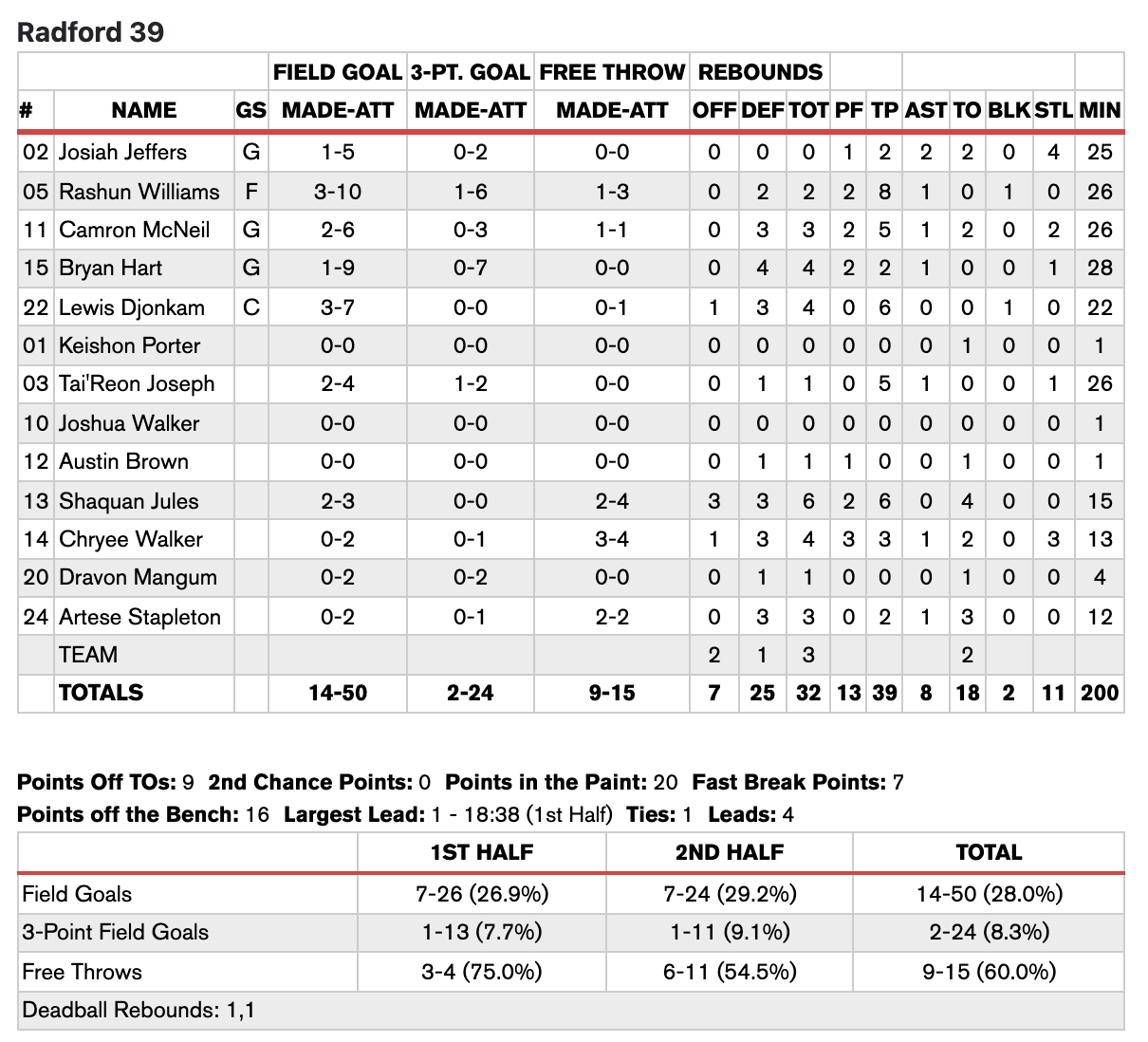