George Mason’s Jazmyn Doster stopped at the free throw line and started again, backing Elizabeth Kitley down in the post. Virginia Tech’s center put her hands up in Doster’s face, affecting the shot enough for it to bounce off of the backboard and rim, landing in the hands of Azana Baines.

Kitley, though sound defensively on Sunday afternoon, struggled once more to beat the double teams.

But that all changed on the next possession with three minutes remaining in the second quarter. No. 24 Virginia Tech was already leading by 11 points at the time, but its superstar only had two points and was only 1-of-5 from the floor.

Cayla King found Kitley, already guarded, at the high post. Kitley received King’s pass, took a dribble and two steps as she spun towards the basket before releasing the ball off the backboard, which fell into the bottom of the basket.

Kitley — and the rest of her team (3-0) — torched George Mason from beyond the arc and inside it while en route to a 81-52 win on Sunday afternoon.

The Hokies shot at least 39% for the third time in as many games (44.8% on Sunday). Kitley finished the matchup with a team-high 23 points and 10 rebounds for her first double-double of the season, while Aisha Sheppard (16 points), King (15) and Emily Lytle (13) scored in double figures.

Lytle, though, was thrust into the starting lineup for Azana Baines, the first change this season from head coach Kenny Brooks. Tech’s previous five included Georgia Amoore, Sheppard, King, Kitley and Baines for the final 13 games of last season and the first two this year.

It’s not a total surprise that Brooks made a change to the lineup. He raved about the depth of his team before the season, and said that his team could see multiple starting lineups depending on the matchup. His change added more space to VT’s strategy as Lytle is more apt to shooting beyond the arc than Baines is.

Lytle was an All-ASUN first teamer last season at Liberty after averaging 14.7 points per game and 5.0 rebounds, both of which were career highs. But she only scored 11 points in the Hokies’ first two games, and it’s not because she wasn’t shooting well. Rather, she hasn’t seen the same amount of opportunities to score the basketball as she did with the Flames.

But there she was, taking the floor with Amoore, Sheppard, King and Kitley for the opening tip in Fairfax, Va., and she made Brooks’ decision pay off immediately. After George Mason turned the ball over on its first possession, Lytle freed herself from her defender at the top of the arc and received a pass from Kitley before winding up and knocking down VT’s first shot of the afternoon.

She shared a high-five and a smile with Kitley before settling down at the other end of the floor.

Through the Hokies’ first two games, there had been a stark difference in Kitley’s performance. She had a tough time conquering the extra defensive pressure on Tuesday against Davidson, but figured out in and exploded in her career-high 34-point effort Thursday night at George Washington

It appeared that Kitley’s afternoon was heading more towards her performance against Davidson before her confidence-boosting bucket. She went on to knock down 10 of her final 12 shots, while adding a free throw for good measure.

But even when her shots aren’t falling, she’s there helping facilitate the offense. Kitley will find herself backing double double teams, but she doesn’t panic. She’ll slow herself down to find an open player beyond the arc, reverting VT to its traditional style offense of letting the shots fly from deep. The Hokies made 13 of their 29 shots from three against the Patriots.

Tech slowed the game down, especially after Kitley got going offensively. Amoore, who finished with nine assists, typically brought the ball up the floor and would look for Kitley down low. But if she was guarded, the Hokies were methodical, made the extra pass and didn’t push the transition three as much as they did against their two previous opponents.

Through three games, Virginia Tech has begun to figure out the rotation puzzle pieces in a season in which Brooks has said that he has “more depth than ever.” Sunday’s barrage of three pointers came as Kitley worked to fix her struggles and as two of VT’s best shooters Kayana Traylor and Amoore — who were a combined 1-for-6 from three — wrestled with their own skirmishes.

With it came the emergence of VT’s multiple deadly weapons, one’s that can explode for 20 points on any given night. 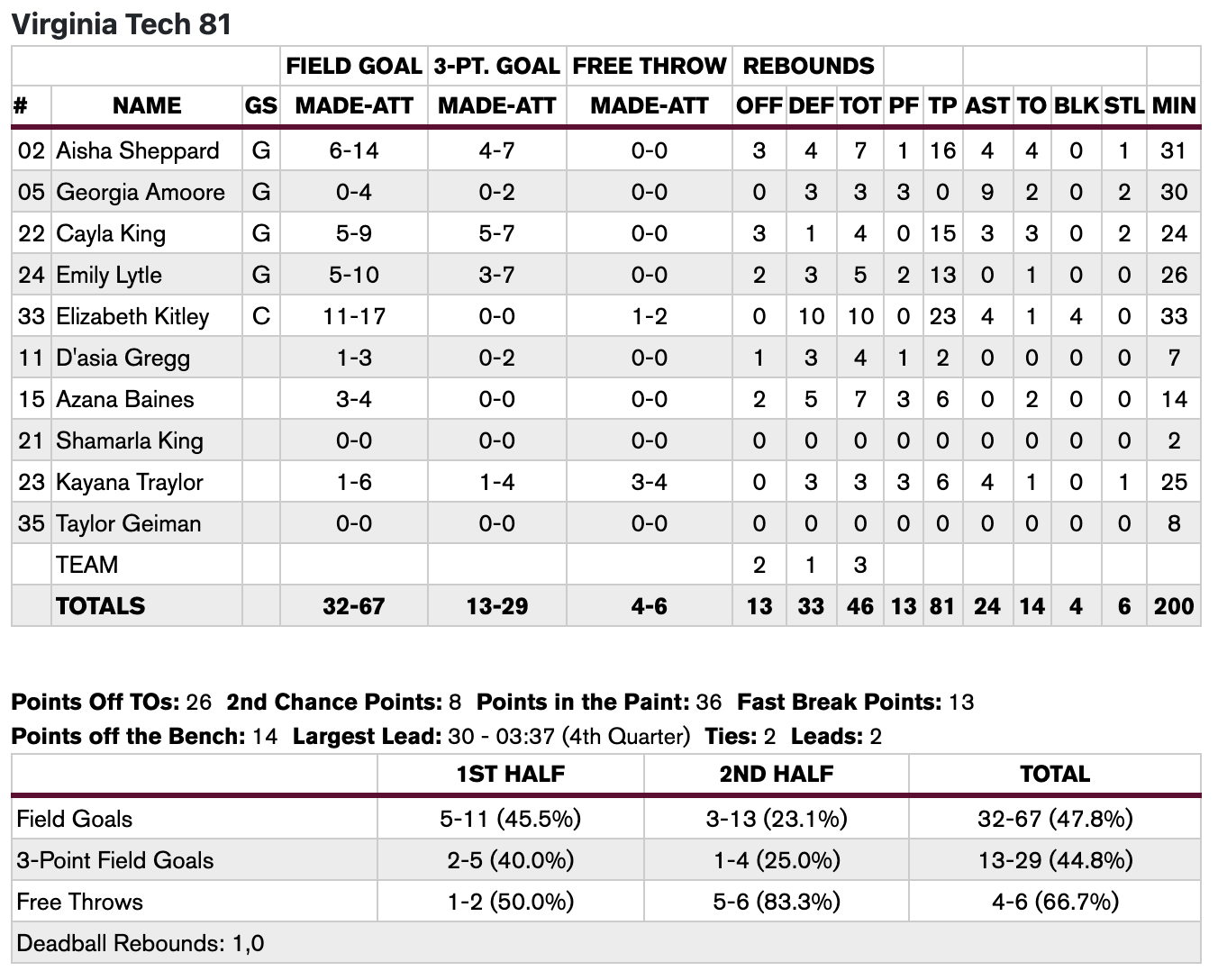 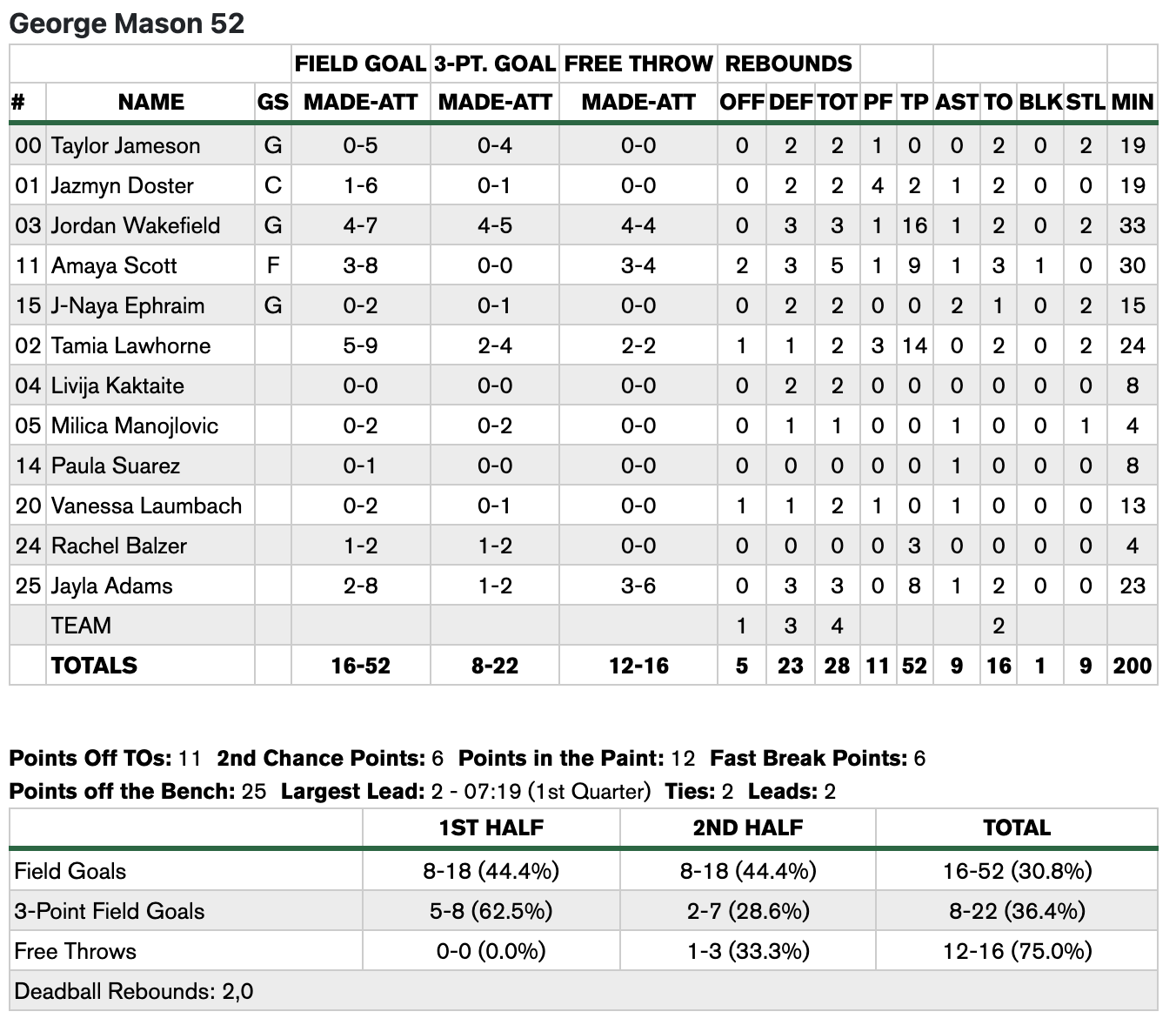