In previous games in the 2021 season, Virginia Tech has looked shell-shocked, but kept on fighting until the end. But on Friday night in Chestnut Hill, Justin Fuente & Co. didn’t have any answers, and, quite honestly, seemed to give up towards the end of the 17-3 loss.

The Hokies were plagued by injury. Tre Turner, who recorded a career-high seven catches for 187 yards at Georgia Tech, was unavailable. Mario Kendricks did not play, limiting Tech’s defensive tackle depth. Center Brock Hoffman went down during the game.

And with 3:22 to play in the first quarter, quarterback Braxton Burmeister kept the football on a read option and took a hard hit. He did not return.

Still, Virginia Tech only put the ball in the air once in the entire first quarter on 14 plays. Drives of eight plays and six plays both ended in punts, and the Hokies acted timid offensively.

The return of Phil Jurkovec sparked good news for the Eagles. With him under center, they moved the ball for 346 total yards, though 234 of that came on the ground. But as Fuente said, his presence shouldn’t have impacted the run game.

Tech struggled to tackle at times, couldn’t get stops (BC was 6-13 on third down) and when it was on offense, couldn’t muster anything. It was a very uninspiring team performance behind a coach who, simply put, looked defeated postgame.

That's about as resigned and soft-spoken as I've seen Fuente after loss in his time at Virginia Tech. #Hokies

The Hokies defense made the duo of Jurkovec and running back Patrick Garwo look like West Virginia’s Pat White and Steve Slaton. Garwo gashed Tech for 116 yards and a score, while Jurkovec had a carry or two where he looked like Michael Vick breaking tackles.

But as good as Boston College was offensively for its red bandana game, Virginia Tech couldn’t muster anything on that side of the ball. No matter the injuries. Fuente and his staff looked afraid to let backup quarterback Knox Kadum be comfortable in the offense. He only threw 16 passes, completing seven.

Tayvion Robinson was the lone receiver with a catch (four) while tight end Nick Gallo (two catches) and running back Raheem Blackshear (one) contributed.

Virginia Tech looked uninspired, and, frankly, Fuente seemed to be out of answers.

“They [Boston College] ran the ball really well,” Fuente said. “We ran the ball well. Basically made no plays in the passing game.”

When asked if he expects more out of the passing game even with the injuries, Fuente said, “yeah, we have to be better if we want to win games.”

Virginia Tech was one-for-seven in the first half through the air. Kadum completed six of his ten attempts in the second half, but even when the wheels finally started to churn for the team, problems occurred.

In the first half, Dorian Strong picked off Jurkovec. He tried to return it, however, and was stripped. The Eagles recovered, gaining 22 yards in the process.

The Hokies’ lone red zone trip resulted in a fumble, too. Driving at the beginning of the fourth quarter, gains of 22, 11 and 16 moved the ball into BC territory. Robinson was lit up on a screen on second-and-15, though, and the ball was punched out. Eagles ball.

Then, in the most peculiar of decisions, Virginia Tech faced a fourth-and-six at its own 25 with about five minutes remaining. Down two scores, instead of going for it, Fuente punted. Postgame, he cited flipping the field, getting a stop and getting the ball back.

Peter Moore, who was spectacular all night punting the ball, flipped the field. But the Hokies didn’t do either of the latter, as Boston College ran out the clock, ending the game.

John Parker Romo nailed a 47-yard field goal to keep Virginia Tech’s 342-game scoring streak alive, the second-longest in the FBS and a record that dates back to 1995. It was the first time the Hokies hadn’t scored since the famous Wake Forest, 0-0 regulation game, in 2014.

However, Virginia Tech finished with 73 total passing yards, the fewest in the Justin Fuente era. The previous low was 75 at North Carolina in the hurricane in 2016.

That Crimson Tide team finished 11-2 and lost to Oklahoma in the Sugar Bowl. Heck, that Tar Heels team went 8-5 and lost in the Sun Bowl.

This Boston College team was 4-4 (0-4 in the ACC) entering Friday’s game. For the second time this season (first time was Syracuse), the Hokies were an opponents’ first conference win of the year.

Here’s another stat to put it in perspective:

Virginia Tech has now gone 43 consecutive games without racking up 500 yards of offense — the longest streak in the country by 11 games (Illinois, 32) and longest by any P5 team since Minn went 49 straight from 2009-13.

The last time the Hokies hit 500? The loss at Old Dominion.

Earlier this year after the 28-7 “non-responsive” loss to Pitt, it felt like the same old story, and Fuente spoke like a coach who knew he might not be in Blacksburg after the end of the season.

In that game and all others in 2021, the Hokies battled until the end, which Fuente praised. On a cold, November night in Boston, that didn’t seem the case.

Despite praising his group’s effort, as he always does, the head ball coach and his players truly looked defeated. Maybe for good, this time.

And if it truly is almost the end for Fuente’s tenure at Virginia Tech, there’s an interesting parallel.

After that 2019 loss, Virginia Tech bounced back with answers, winning six of its next seven games. This time, the Hokies don’t seem to have any. 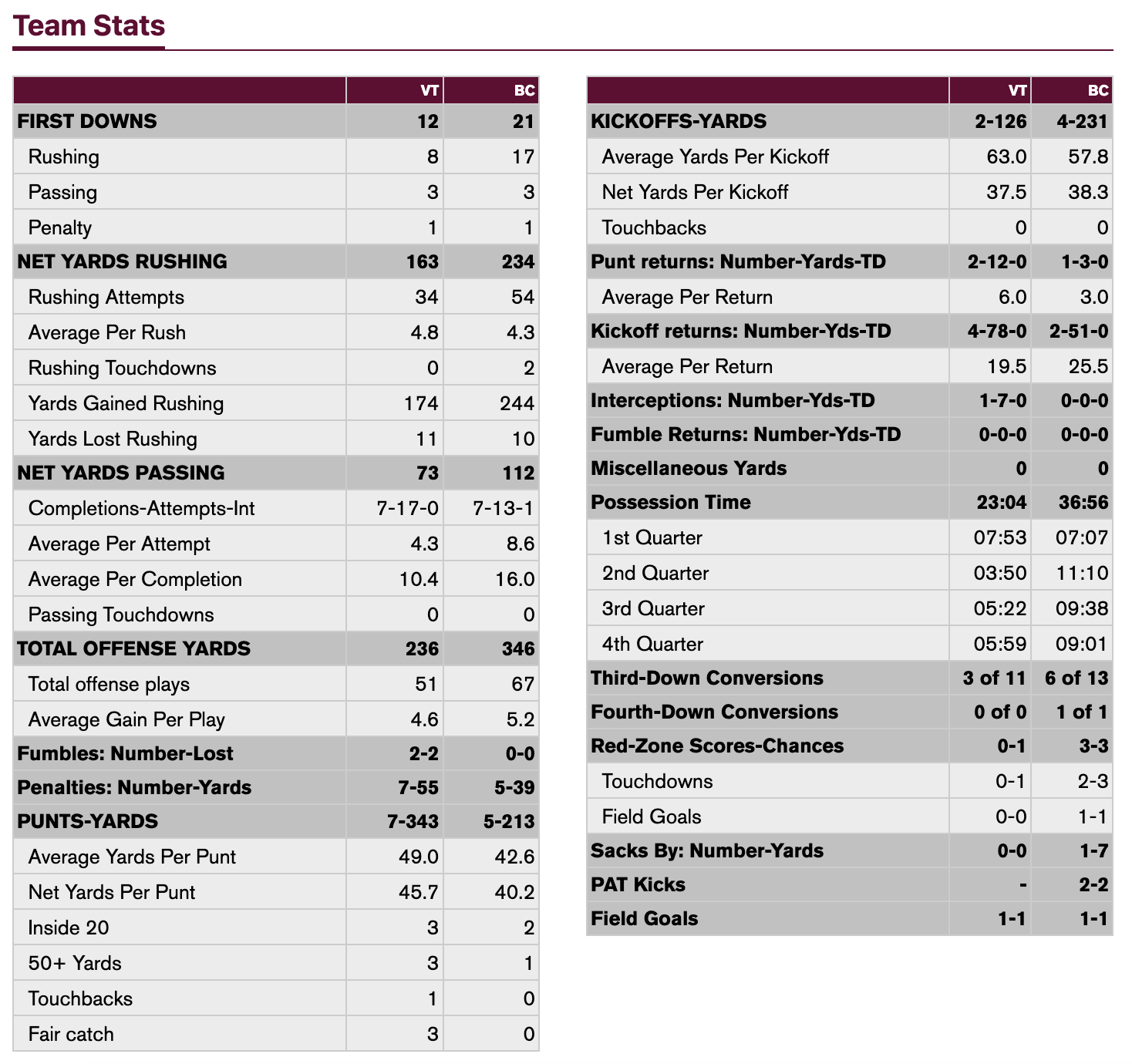 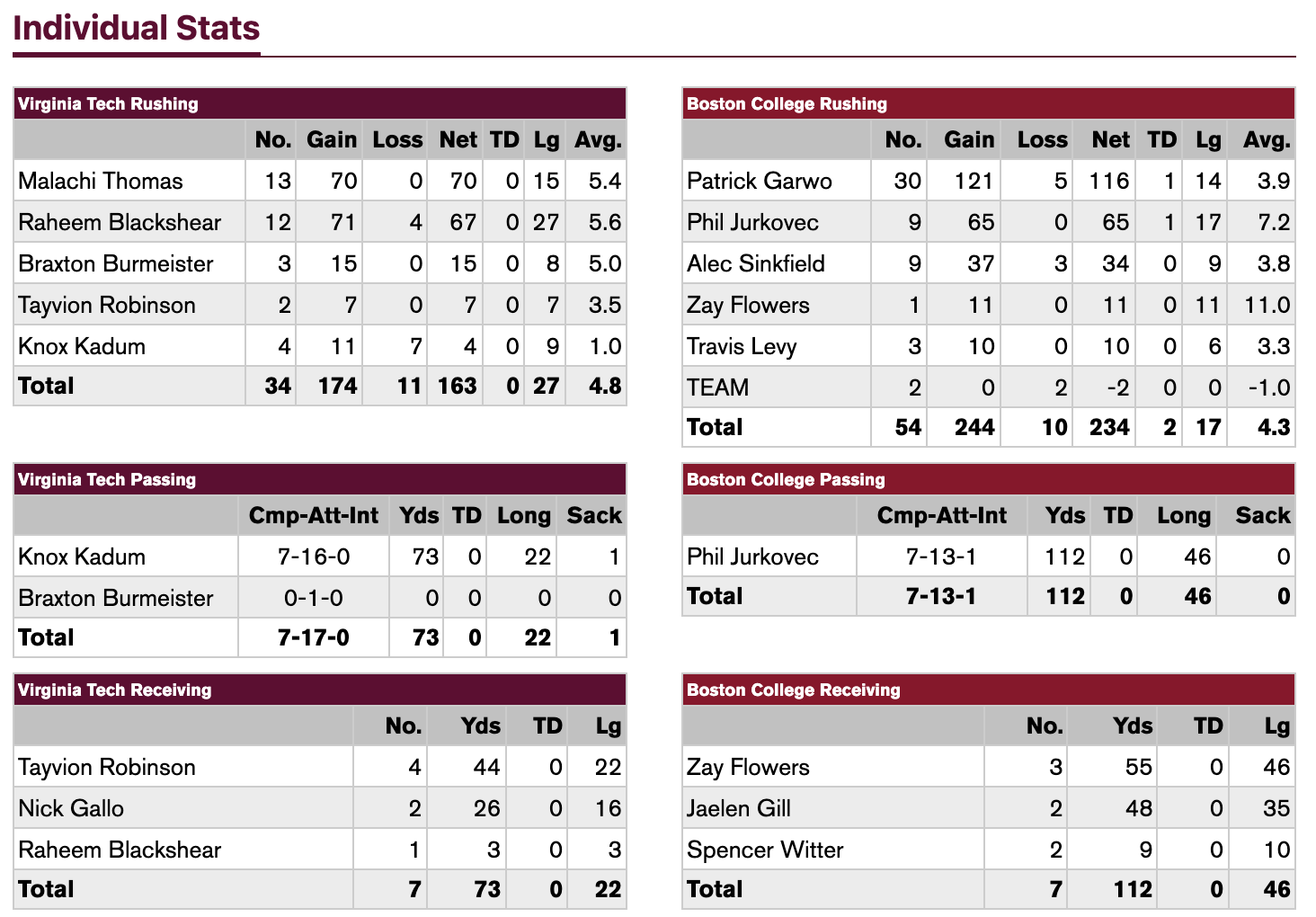 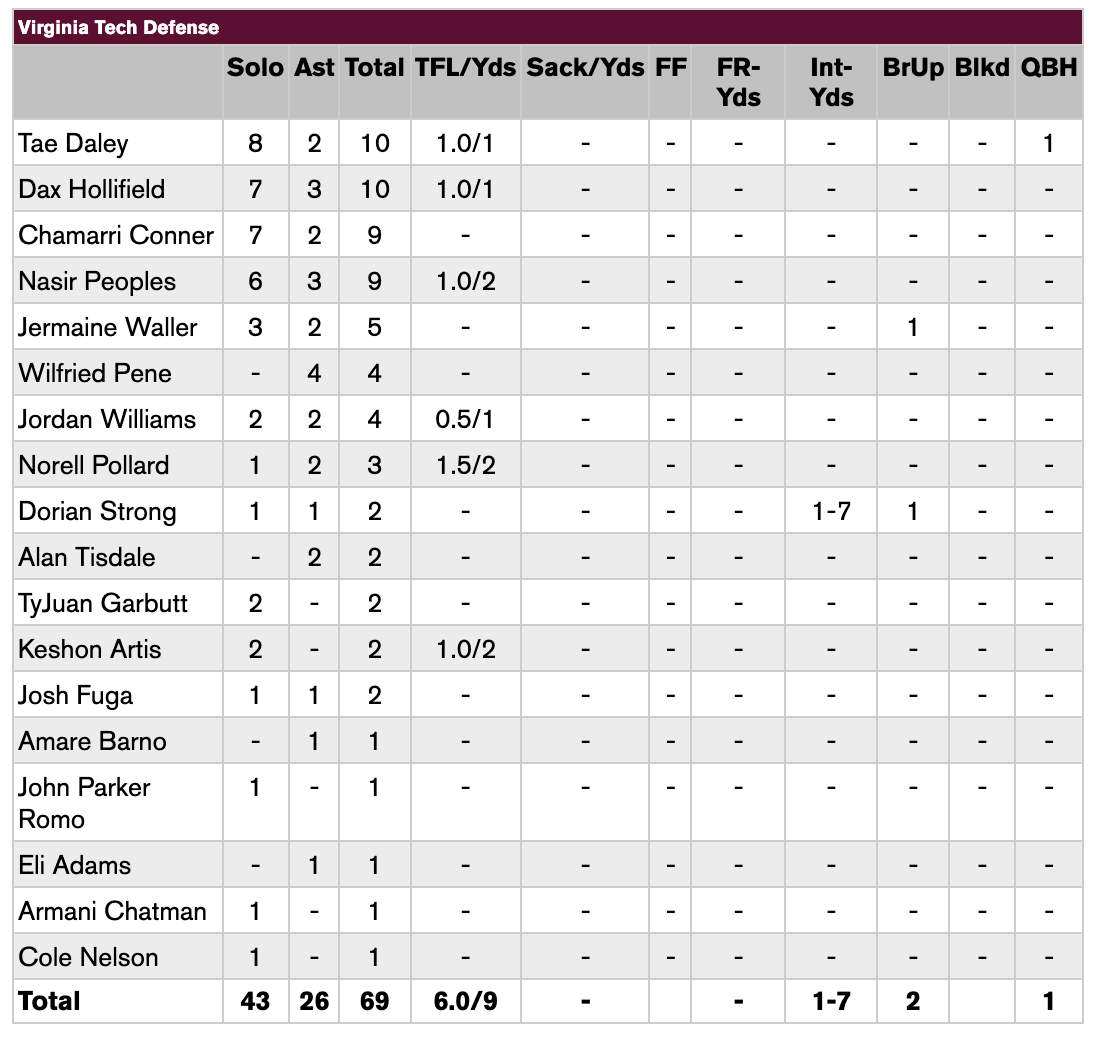 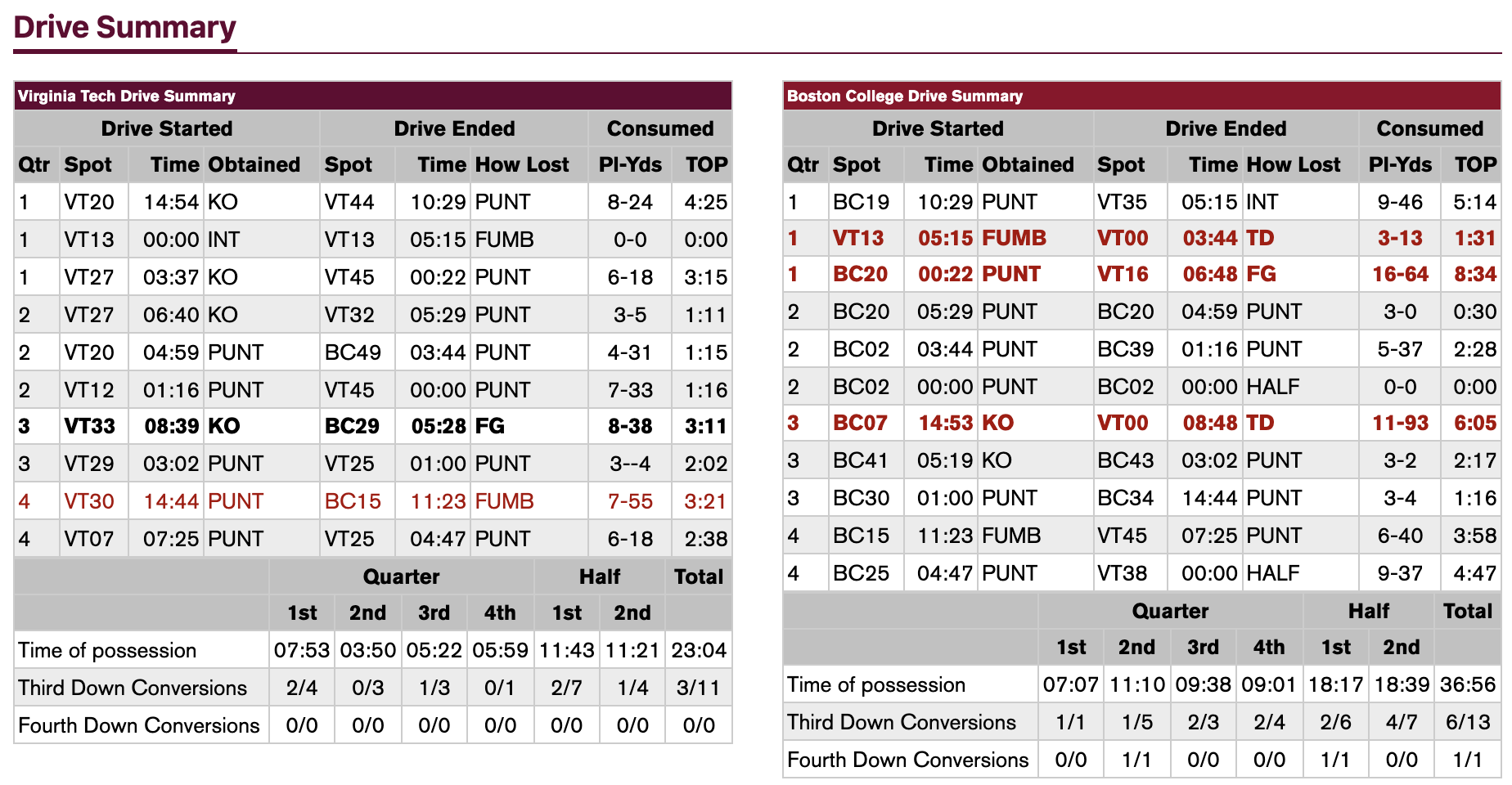