Against the top scoring offense in the nation, it didn’t matter that Virginia Tech’s defense found ways to get stops. The Hokies couldn’t move the ball, let alone score points, in a 28-7 loss to Pittsburgh.

Virginia Tech’s offense gained 74 yards on 34 plays (2.2 yards per play) in the first half and punted on six of its nine drives. The end of the half and two turnovers (interception, turnover on downs) halted the other three series.

Meanwhile, Pitt (5-1, 2-0 ACC) was methodical. The Panthers racked up 254 yards of total offense on 46 plays in the first 30 minutes and led 21-0 at intermission. That put the game away at halftime.

It was the Hokies’ inability to answer, though, that led to their downfall. Tech only gained more than ten yards on two of its first half drives. One went for 50 yards but resulted in a turnover on downs, while the other ended in a punt.

Justin Hamilton’s defensive unit wasn’t anywhere close to perfect, but it did a darn good job given the circumstances. Essentially playing with its back against the wall with minimal help, the defense forced eight punts, including five three-and-outs, and kept it as respectable as it could.

It was nowhere close to being enough, though.

Braxton Burmeister looked healthy but only completed 11 of his 32 attempts (34%). The Hokies averaged 3.2 yards per rush but had just two double-digit carries. One was a 17-yard scramble by Burmeister, and the other was a 12-yard rush by true freshman Malachi Thomas in the last minute of the game.

And it wasn’t until Burmeister hit Tayvion Robinson in the corner of the end zone in the third quarter that Tech grabbed back a tiniest sliver of momentum.

Even then, when it had a chance to make it a two-score game, Virginia Tech stalled.

On the third drive of the second half, Burmeister scampered for 17 before hitting Tre Turner for a 12-yard gain. The Hokies threw two incompletions and turned it over on downs, though.

“I don’t know if it was one thing,” Fuente said about the offense. “I think the wind on a couple occasions was a little bit of an issue. Ball placement was an issue. We’re going to have to fight through tight coverage a couple times. One time – I can’t remember them all, we catch the ball but don’t secure it all the way to the ground on what would be a big play. It wasn’t one thing, it wasn’t one position. It was a combination of those things.”

The defense deserves a lot praise. Last season, that unit was poor. Hamilton didn’t have an opportunity to implement a system because of COVID, so Tech was below average defensively.

That group has really turned it around this season. It showed out against Sam Howell and North Carolina and was good after a bad first quarter against West Virginia. Even without mike linebacker and captain Dax Hollifield for the first half against Pitt, due to a targeting call in the second half of last week’s loss to Notre Dame, it was good. It didn’t have any help when it needed it, though.

There were a few times where Tech could’ve been better defensively, like when Jermaine Waller, who left the game in the first half and was in a boot, was outmuscled by Pitt’s Jared Wayne down the sideline for a 28-yard catch. However, overall, it was the offensive half of the Virginia Tech team who didn’t do its part.

The Hokies couldn’t connect throwing the ball, and they didn’t gain any traction on the ground. Fuente and Tech players mentioned earlier this week how crucial establishing the running game was going to be, not just against Pitt but for the rest of the season.

Virginia Tech finished with 90 rushing yards. Thomas was the lead rusher with 33 yards. Take out the two double-digit rushes and that total drops to 61 yards on 26 carries. That’s an average of 2.3 yards per carry.

As a whole, the offense had all kinds of issues, as Fuente alluded to. The most obvious errors were the dropped passes from the receivers and missed throws from Burmeister. There’s plenty of blame to go around, and that’s why Tech’s offense has looked like it has so far this season. It hasn’t been good enough or consistent enough across the board, from the players to the coaches.

And here’s a stat: Virginia Tech’s 224 yards of total offense is the least amount of yards a Fuente-coached team has put up in his six years. The previous low was at Notre Dame in 2019, a game where the Hokies totaled 237 yards behind Quincy Patterson, who started in place of the injured Hendon Hooker.

If you take out the final drive at the end of the game when Tech gained 31 yards, the total falls to 193.

Where does Virginia Tech turn? Where are the answers?

The Hokies (3-3, 1-1 ACC) are .500. Five of six games have been played at home. The three losses have come against West Virginia, Notre Dame and Pitt.

This is a make-or-break game for Virginia Tech’s season. Fuente & Co. can go one of two ways from here. The season isn’t over, but depending on the response, it could be.

In 2019, Tech got crushed by Duke, 45-10. After that, Tech, sitting at 2-2, regrouped and won six of its last eight games in the regular season. That’s one way the Hokies can go if they stick together.

In 2018, the Hokies lost at Old Dominion by two scores. After barely scraping out a win a few weeks later at North Carolina, which required a last-second touchdown, VT lost four straight and needed to schedule Marshall – and win – to keep the bowl streak alive. That’s similar to last year’s season, which saw Tech go 2-5 over the last seven games.

Fuente said he believes his group can weather the storm. Almost every coach would say that, I’m sure. But can the group seriously rebound?

Yes, Tech is only 1-1 in the ACC with six conference games remaining, but when the Hokies have to play on the road for four of the final five weeks of the season, how will the team respond? West Virginia was a first glimpse of Tech playing on the road. VT came out flat and paid for it.

At Georgia Tech, Boston College, Miami and Virginia? The ACC Coastal Division is down, but this Virginia Tech offense isn’t in shape to walk into any of those places and confidently put up more than two scores.

Against Notre Dame, the loss felt like the same old story: Virginia Tech did a lot, but not enough. At home against Pitt, in a game where the defense held Kenny Pickett & Co. to their fewest amount of points this season, the Hokies’ offense was nowhere to be found. (Pickett finished 22-of-37 for 203 yards and two touchdowns, for what it’s worth.)

Fuente took the blame in front of the media, and it’s great that he is taking responsibility. But there are many, many questions to be asked from this point forward, and a variety of people that will be asking them. 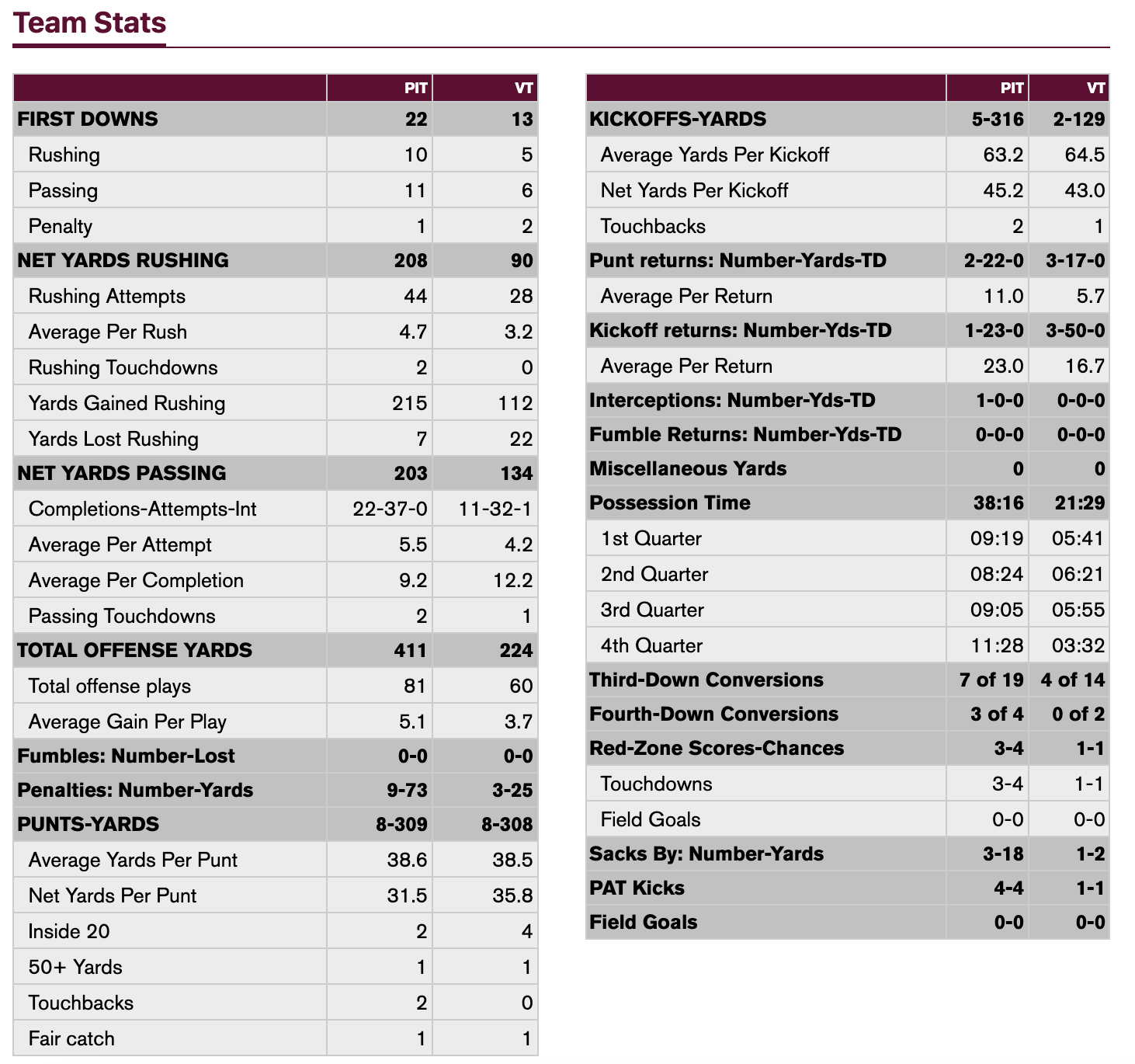 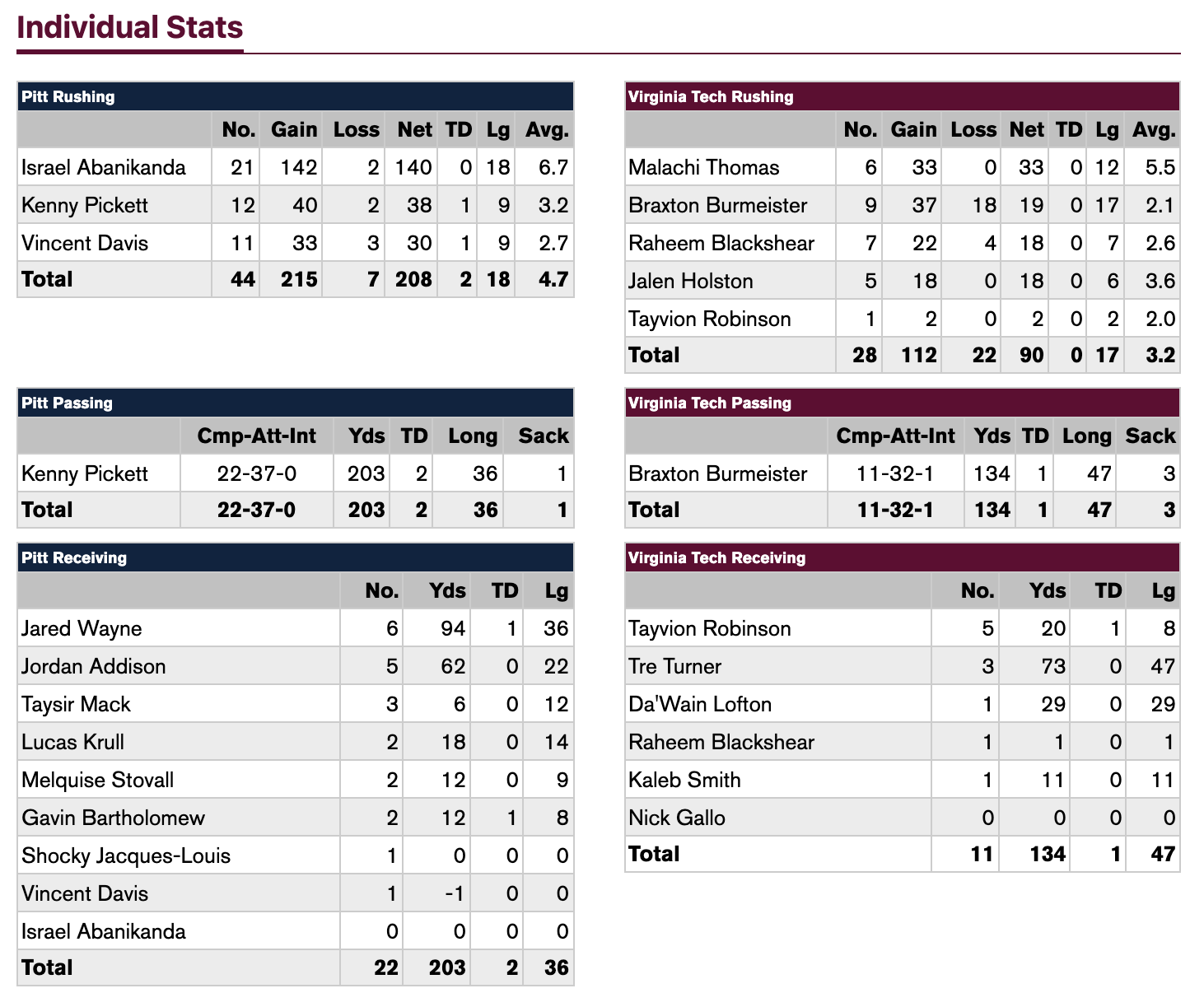 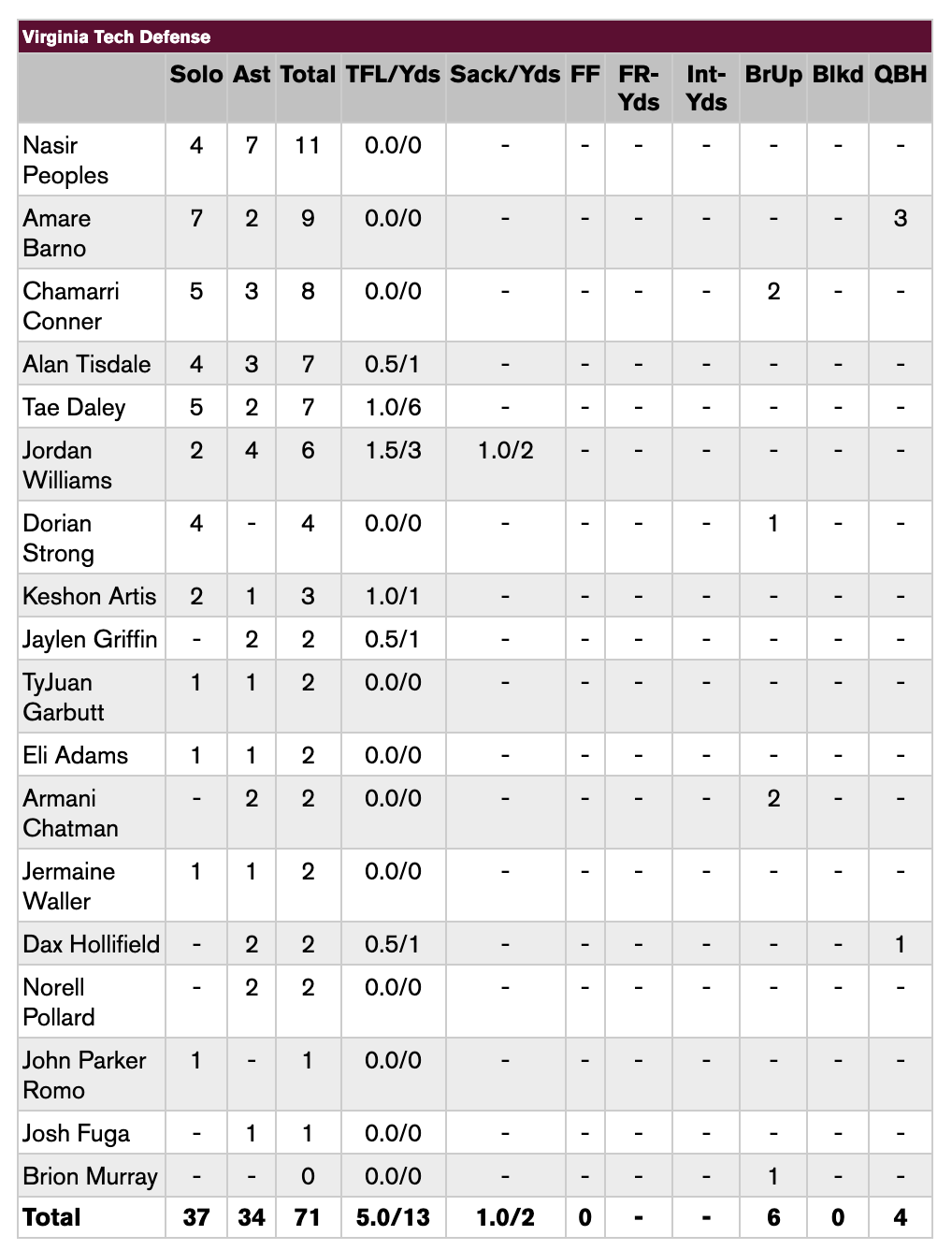 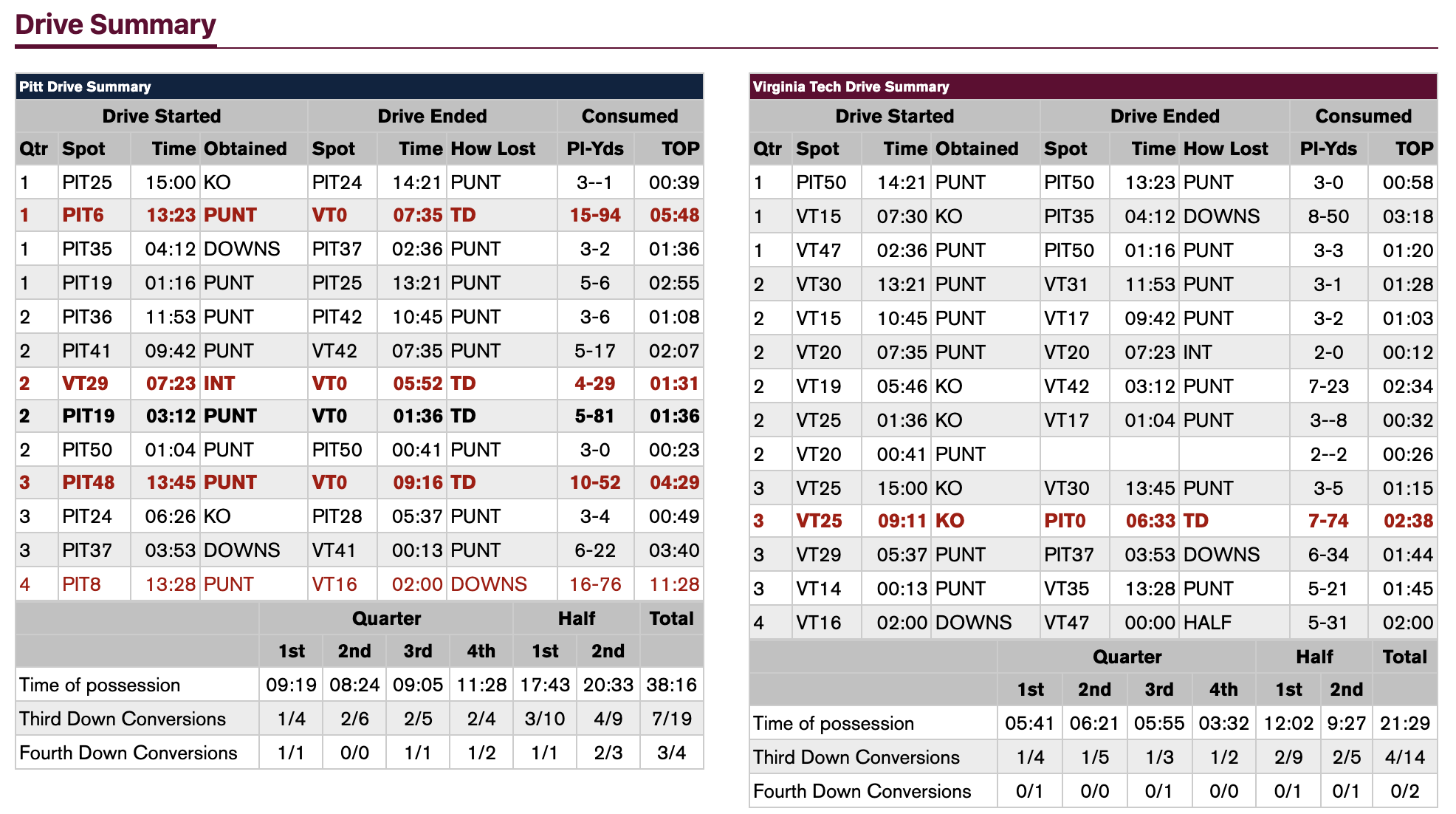