Following a gut-wrenching loss to Notre Dame on Saturday, Virginia Tech turns its attention to Pitt. A contest that has huge ACC Coastal Division implications, the Panthers and Hokies both enter the game with 1-0 conference records.

Ahead of the important clash, which Chris Coleman previewed Wednesday morning, Tech players spoke to the media about improving up front on the offensive line, how that can open up the run game (which could open up other things), and how the linebackers will fare without Dax Hollifield.

Against Notre Dame, Virginia Tech had five plays of negative yards and 21 plays (out of a total 78) that went for zero yards. That also doesn’t count Burmeister’s ten-yard sack in the second quarter.

Obviously, not all of that is the offensive line’s fault. However, they could provide more of a push up front to give quarterback Braxton Burmeister more time and provide more holes for the running game. That’s something guard Lecitus Smith brought up on Wednesday, particularly getting more of a push at the line of scrimmage.

“There are things we have to clean up,” Smith said. “For starters, run the ball better. Just open up holes for our running backs so they can get to that third level and be one-on-one with that safety. That’s what it should be on running plays and that’s what we have to get it to.”

Smith said there were some good things on film from Notre Dame, but he said Tech’s offensive linemen need to fix their footwork, among other things, ahead of Pitt.

“You have to make sure you’re firing off the ball with good footwork,” Smith said. “You don’t want your feet too tight or too far spread apart or you’re not going to be able to step like you’re able to or you’ll be driven all around by that d-tackle. Double teams, keep our hips low. … Make sure we’re squaring up a guy and not fighting against each other, because it’ll be a lot less effective and that d-tackle or d-linemen will be more likely to split the double team if we’re not actually working together, and then we’ll never get to the second level.

“Feet in the ground, good steps, good hands, firing off the ball, low hips. That’s what it takes.”

If the Hokies can effectively execute what Smith mentioned with opening up holes for their running backs, it will create opportunities in other ways.

First, here’s a breakdown of Virginia Tech’s rushing yards and average yards per carry in each game this season: 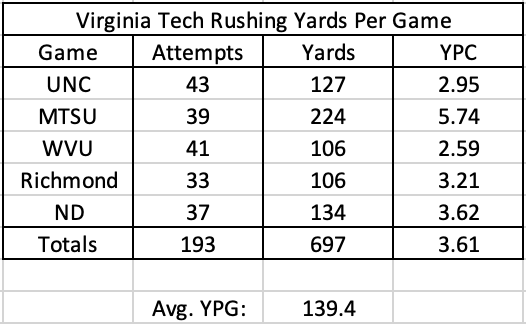 Looking at the ACC’s statistics, the Hokies rank second-to-last in the ACC in yards per game, only behind UVa, and dead last in yards per carry. And as far as UVa’s offense goes, the Cavaliers are first in the conference in passing yards, and it isn’t remotely close.

Virginia Tech hasn’t run the ball well all year. Whether it’s a product of the running backs, the offensive line, defenses not respecting the passing game, or a combination of the three, it just hasn’t worked well.

Smith said that’s a big goal this week: Establish the offensive line up front so Tech can run the ball. Do that, and it opens up doors for other things.

[If you can run the ball], it takes pressure off the QB because if we can’t run the ball, we’re forced to throw it,” Smith said. “If we’re forced to throw it, you’ve probably got guys that want to back up into coverage because they feel like that first and second line defenders, the d-line and linebackers that can hinder the run game, back up into coverage and then he’s got a lot more to read and you’ve got a lot more guys to account for when you want to throw the ball around the field.

“I feel like it takes pressure off the quarterback. I feel it brings guys that don’t want to be in the box into the box. More-so safeties, and then we’re able to run RPOs and stuff. It definitely opens it up for us, so if we can run the ball more effectively, more efficiently, it helps the whole team.”

Tech used four different running backs against the Irish, a nit Chris Coleman picked on Sunday. Finding success on the ground, or at least chunk plays, is crucial for the Hokies moving forward.

Shake Up At Linebacker

Due to a targeting call late in the fourth quarter against Notre Dame, Tech mike linebacker Dax Hollifield is out for the first half of this Saturday’s game against Pitt.

A captain and a three-year veteran of this defense, Hollifield is second on the team in tackles this season. His partner in crime, backer Alan Tisdale, is tied for first with safety Nasir Peoples.

After Hollifield was ejected against the Irish, redshirt freshman Dean Ferguson stepped in. The Sterling, Va. native has seen time this year, rotating around in Justin Hamilton’s scheme, but he was thrown into the fire against Notre Dame.

With Hollifield out for the entire first half, though, does Tech stick with Ferguson at mike? From Tisdale’s comments on Wednesday, the Hokies are rolling with Keshon Artis, who has backed up Tisdale at backer in 2021, at mike vs. Pitt.

A six-foot redshirt sophomore from Norfolk, Va., Artis has 11 total tackles in 27 games at Virginia Tech. His defensive PFF grades have steadily improved over the years, too:

Neither Artis nor Ferguson is Hollifield, but Tech has two options, if needed, at mike this weekend. Tisdale has confidence in both.

“I believe in both of them [Artis and Ferguson]. Both of them are ready for Saturday.”

Other Notes From Wednesday: