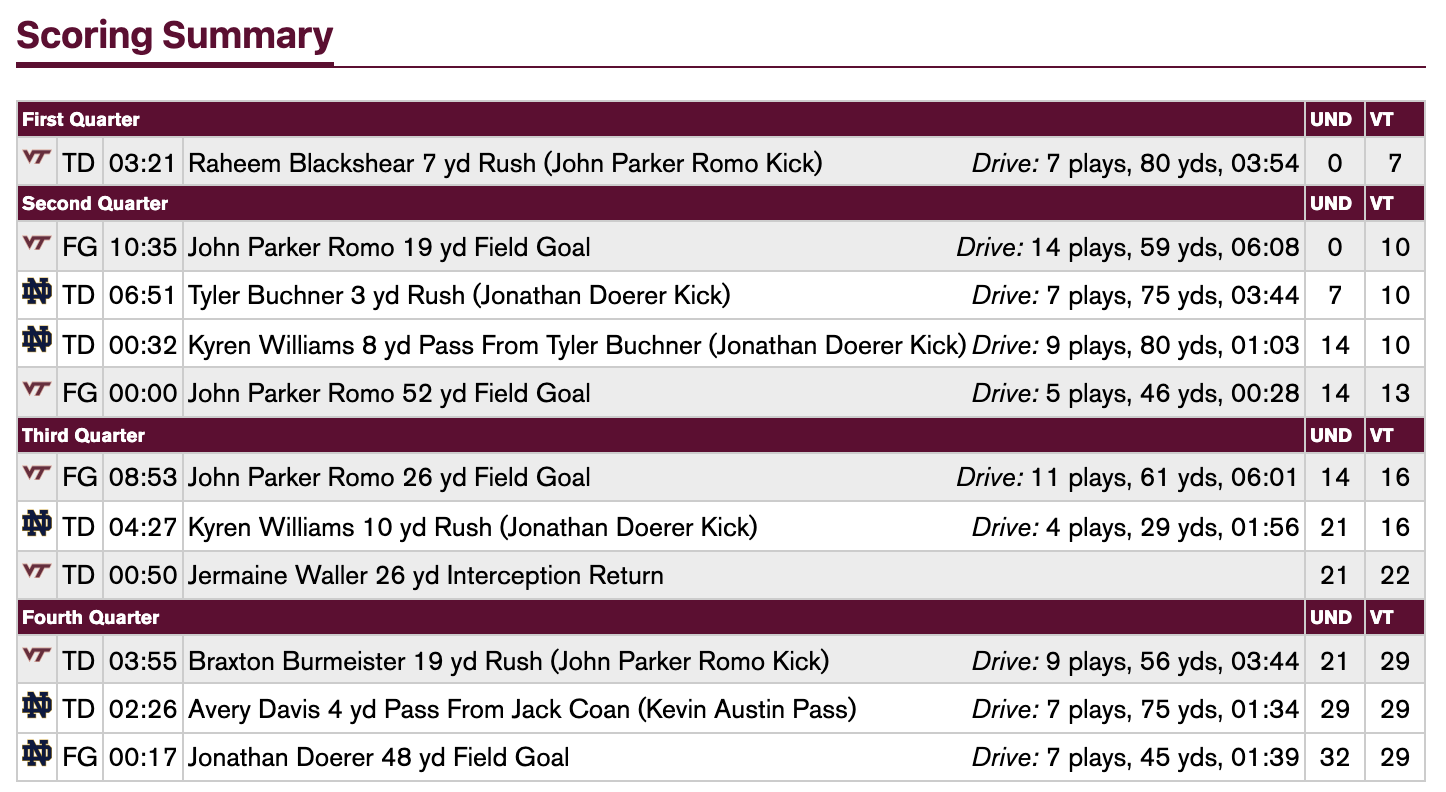 For the second time this season, Virginia Tech found itself on the wrong side of a heartbreaking loss. First, at West Virginia in a rivalry game on Sept. 18. Three weeks later, at home against No. 14 Notre Dame. It didn’t matter that the Hokies led for over half of the game. They got the short end of the stick in the 32-29 loss.

That it is. For the players and coaches in the program and for those who support it. As I overheard someone say after the game, “It doesn’t matter that they played really well for three quarters. In the end, they came up short.”

How my prediction for the game (Notre Dame by a field goal, plus a defensive touchdown) was so accurate, I’m not sure. This was higher scoring game than many anticipated, but it ended like I guessed – a walk-off field goal by Notre Dame’s Jonathan Doerer to silence a sold out Lane Stadium.

The one incorrect thing from the preview, though, was the whole stalemate part. The Hokies and Irish took some pages out of the college football games earlier in the afternoon and turned it into a thrilling event.

Why can’t the Hokies finish this season? They were doomed by a poor start in Morgantown, sure. But in front of 65,000 fans with a ranked team in their own house?

When Virginia Tech quarterback Braxton Burmeister used his wheels to scoot into the end zone on a 19-yard rush with 3:55 to play, it seemed like the Hokies just needed one stop. But after playing a solid first three quarters, the defense caved. The Irish, led by Jack Coan, maneuvered their way down the field on a seven-play drive in just over 90 seconds to tie it up.

Burmeister & Co. stalled, and left too much time on the clock for Brian Kelly’s squad. Coan led another surgical drive, resulting in Doerer’s kick with 17 ticks left.

You can make the case that the game ultimately doesn’t matter to Virginia Tech. It’s a non-conference matchup and the Hokies are 1-0 in the ACC. Get the least amount of scratches out of the division while running the upcoming seven-game gauntlet and you’ll be rewarded. That’s how some will view it, no doubt.

Yet, this one is different. That same conversation I overheard also provided another interesting comment: “For a coach that is trying to prove to a fanbase that he is the guy, these are the games you have to win.”

There are so many different ways to dissect and analyze the game. The Hokies fought and played their hearts out, and losing linebacker Dax Hollifield to a questionable targeting penalty late is tough. So is rotating quarterbacks and playing without your starter, which Tech did.

It doesn’t answer the question that is on everyone’s mind, though – why can’t the Hokies finish?

It starts with the offense stalling. Virginia Tech had 13 possessions throughout the game. Four of them finished in three-and-outs, and one was a Burmeister interception on third and long. On the other eight drives, Tech punted twice, kicked three field goals and scored two touchdowns. That doesn’t count the final possession where the Hokies lost two yards on two plays while trying to win the game.

Specifically three times in the second half, though, the Hokies ran four plays or less on an offensive possession. On two of the three in the second half, Notre Dame scored on the next offensive series. Tech’s offense was on the field for 3:09 between those three offensive drives, and two of those possessions were less than a minute. That’s not a lot of time to give your defense a breather, and the Irish turned around and made the Hokies pay.

“I wouldn’t say we ran out of gas,” Tech defensive end TyJuan Garbutt said. “A lot of things just went against us. We had one of our leaders taken out of the game due to the penalty. A lot of things we weren’t executing [that] we executed in the first half or the first three quarters.”

That was just one of the many things available for pinpointing after Tech’s loss. The Hokies chasing points at the end of the third quarter after Jermaine Waller’s pick six – an unbelievable play and swing of momentum – when leading 22-21 seemed like an okay decision at the time. Get it, you’re up three. Don’t, only up one. But it was the tiny mistakes like that which came back to nip the Hokies in the butt.

Tech didn’t get it, though, and still went for it, even after a false start by Nick Gallo. And, in the fourth quarter, Notre Dame scored with 2:26 to play and trailed by two because of that mishap. The Irish converted, leading to a tie ball game. If Tech had kicked it when it had the chance, it’s a one-point game, even with Notre Dame’s two-point conversion.

There was also the decision to punt with fourth and one with two minutes to play at your own 27. Tech didn’t lose because of that call, but it’s definitely a play that could’ve changed the game.

Still, this game seemed like a microcosm of recent years with this program – losing in one-possession games at home against Miami and Liberty by a combined four points or coming up short in South Bend in 2019 thanks to an Ian Book magic drive.

A moment that stood out was on Virginia Tech’s third drive of the second half. On 1st & 10 from the VT 41, Burmeister threw a pass to where he thought Turner was going to be – cutting inside towards the middle of the field, around the ND 20. Turner ended up at the ND 40 by the sidelines on an out route. The pass and the target were 20 yards away from each other, and it was the little things like that which cost the Hokies the game.

Settling for a field goal on the opponents’ one-yard line could be criticized, too. But all in all, the Hokies came up short. Tech shot itself in the foot with a few penalties – two linemen downfield called back a Tayvion Robinson TD catch – and generated offensive output at random times.

Burmeister completed 15 of 30 passes for 184 yards, while the Hokies ran for 153 yards and two touchdowns. Tre Turner led Tech in receptions with six for 80 yards. It seemed like the script for the game randomly flipped, though.

Trailing 10-0 halfway through the first half, Notre Dame mounted a comeback and led at intermission. Mixing and matching Coan’s passing abilities with Tyler Buchner’s athleticism seemed to work for Brian Kelly’s bunch. As Garbutt said, Tech did pretty well against Buchner once Justin Hamilton had time to adjust.

“It is a pretty big change, because the other guy [Coan], he’s more of a pro-style quarterback,” Garbutt said. “He’ll just stand in and go through progressions. The second stringer, the guy they put in, I’d say he’s more one read and go, and it takes a minute to get adjusted, especially when they have different type of plays and personnel they’ll run with a different type of quarterback.”

Virginia Tech used multiple quarterbacks, too. Burmeister injured his shoulder in the third quarter – “I landed on my shoulder weird and my arm kind of went numb, so I was just kind of dealing with the numbness” –  and Tech inserted Connor Blumrick. The former Aggie moved the ball some (and ultimately set up Burmeister’s TD rush) but stalled once as well.

Ultimately, it just wasn’t the Hokies’ night. Losses are never easy, either, and heartbreaking ones are worse. But Virginia Tech still has seven regular season games to go play, starting next Saturday vs. Pitt (3:30 p.m). They can’t dwell on the loss for two long; they have to turn the page.

“Mentally, you’ve got to look at all the good things we did and look at the positives from this game, and you’ve got to build on them,” Garbutt said. “There are negatives in every game. Even when you win by 40, there’s something that probably didn’t go your way during that game. We’ve just got to continue to keep our head down and work, because that’s what this team’s really built off of. It’s built off of moving on.

“I’ll say this: The morale in the locker room, it wasn’t the fact that that, ‘oh, we’re upset.’ It was more that we know that we gave them the game, and that’s the heartbreaking part. I feel like us being a veteran, older group, we know that we’ve got to turn the page.” 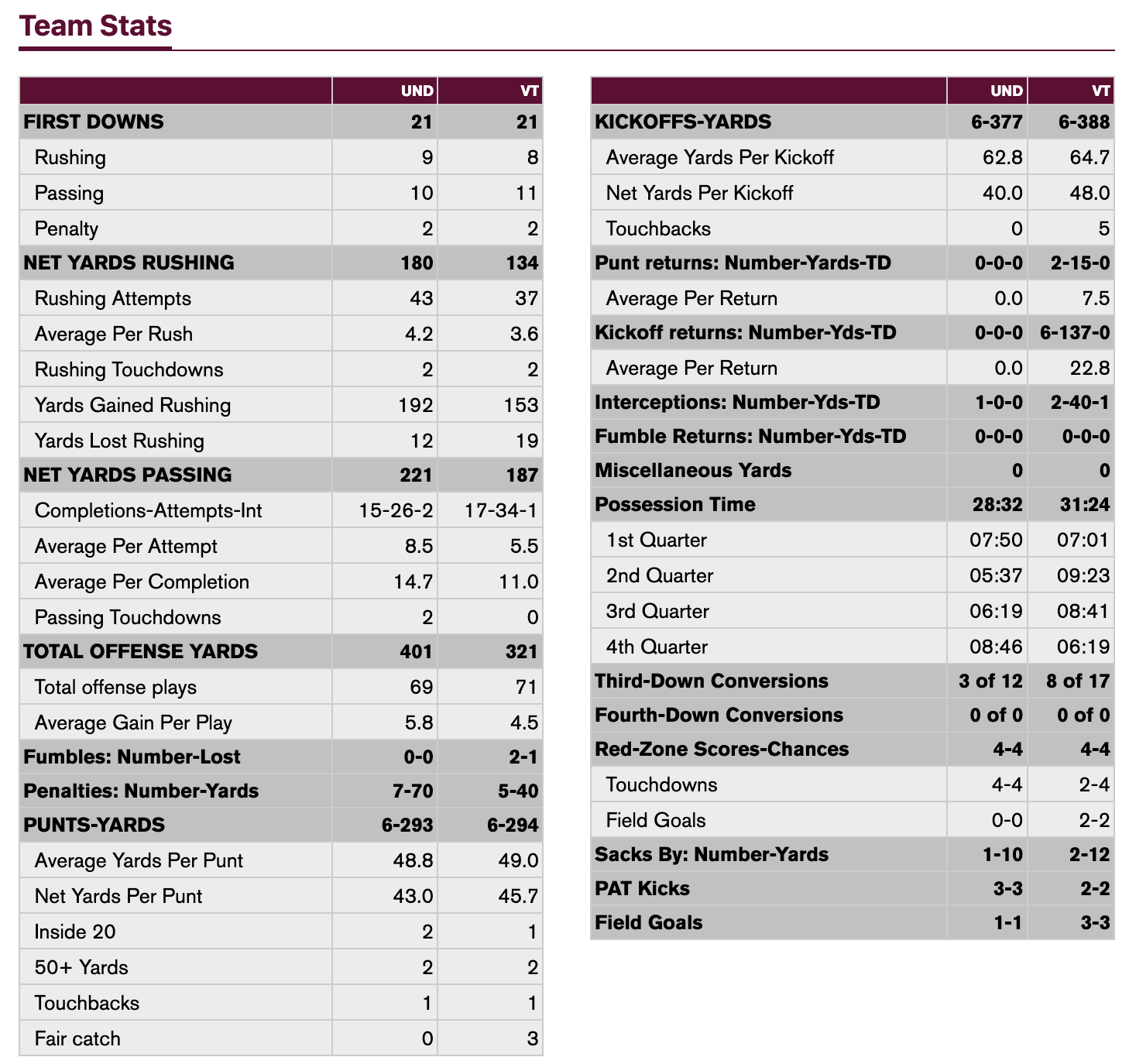 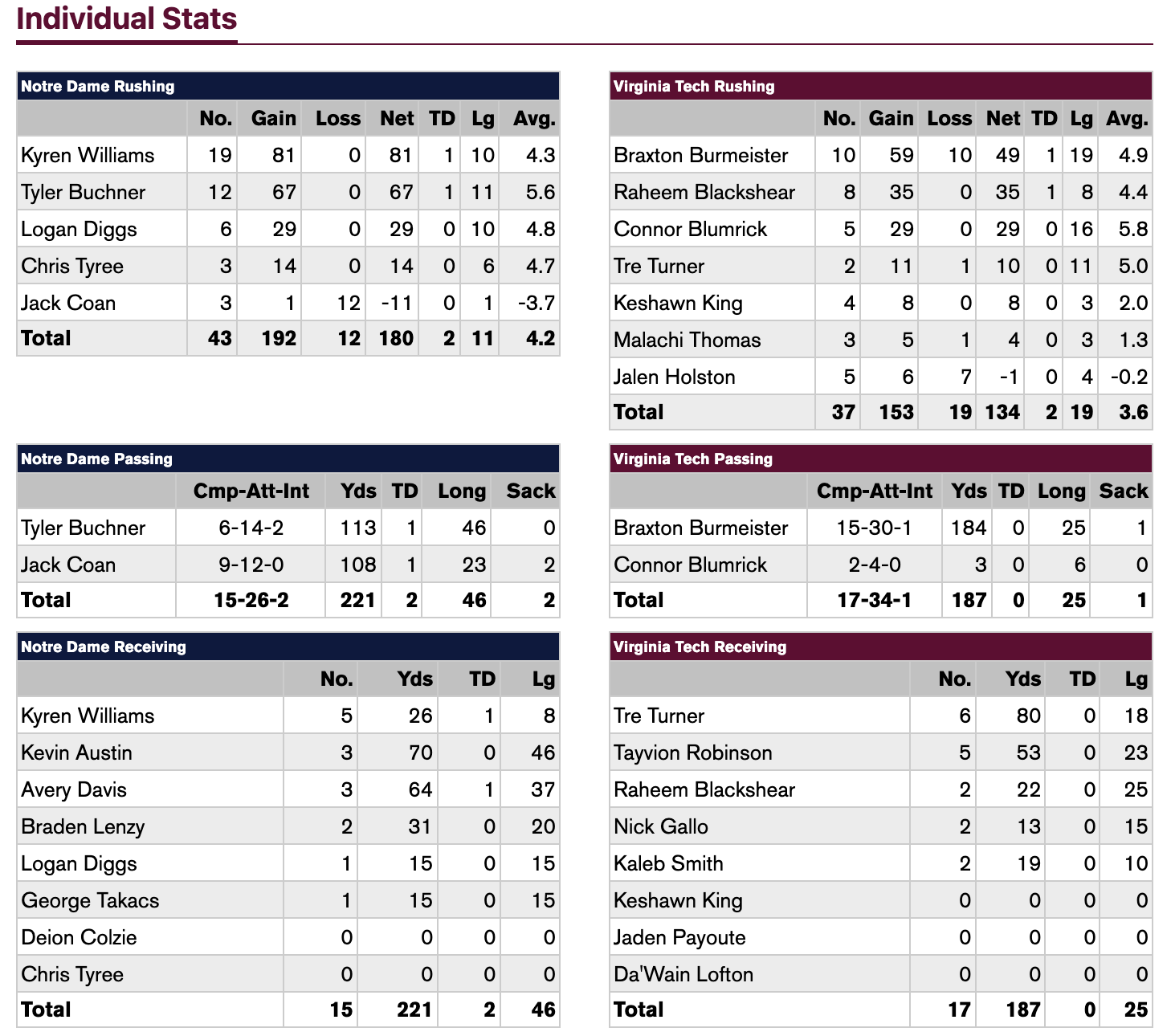 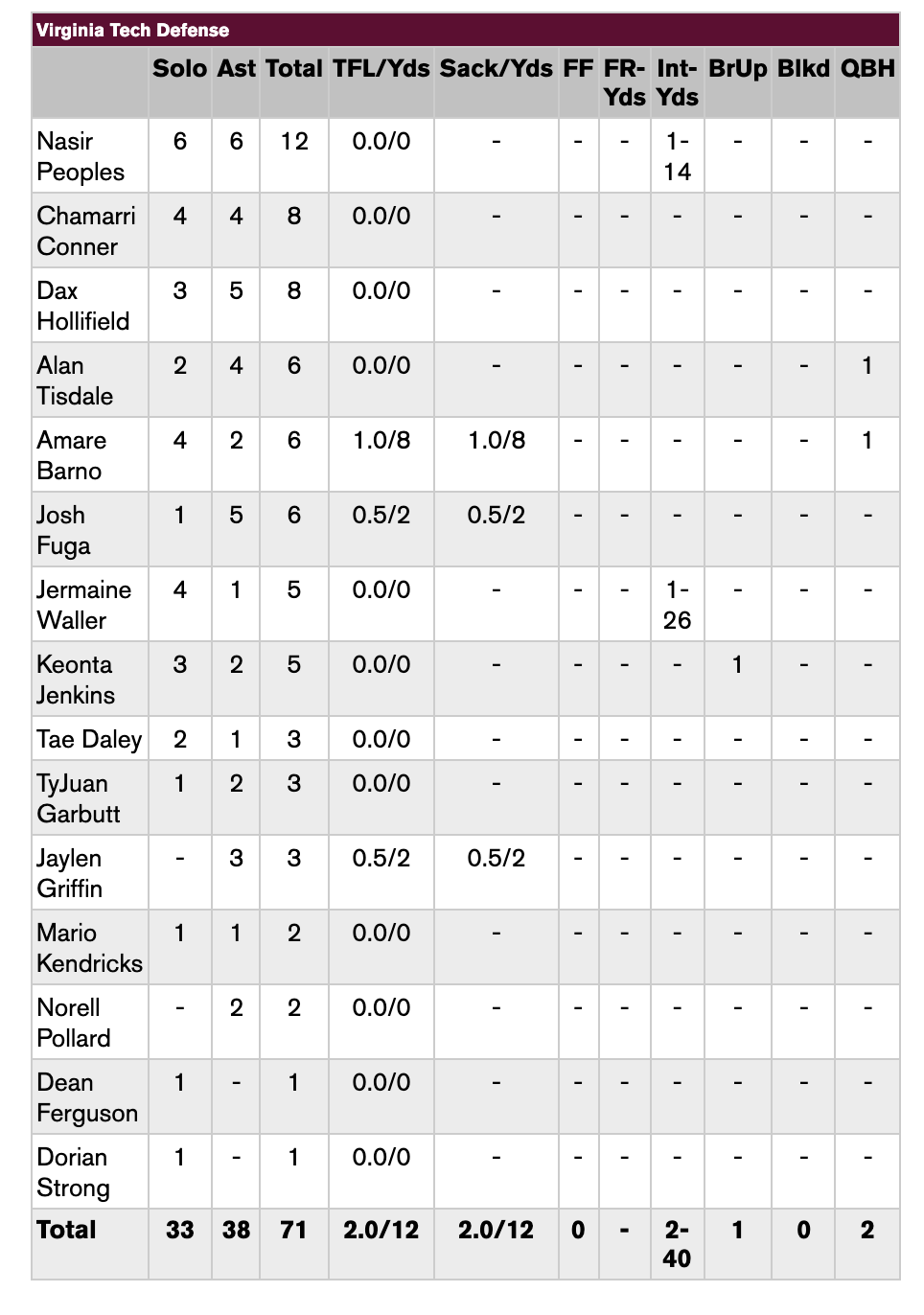 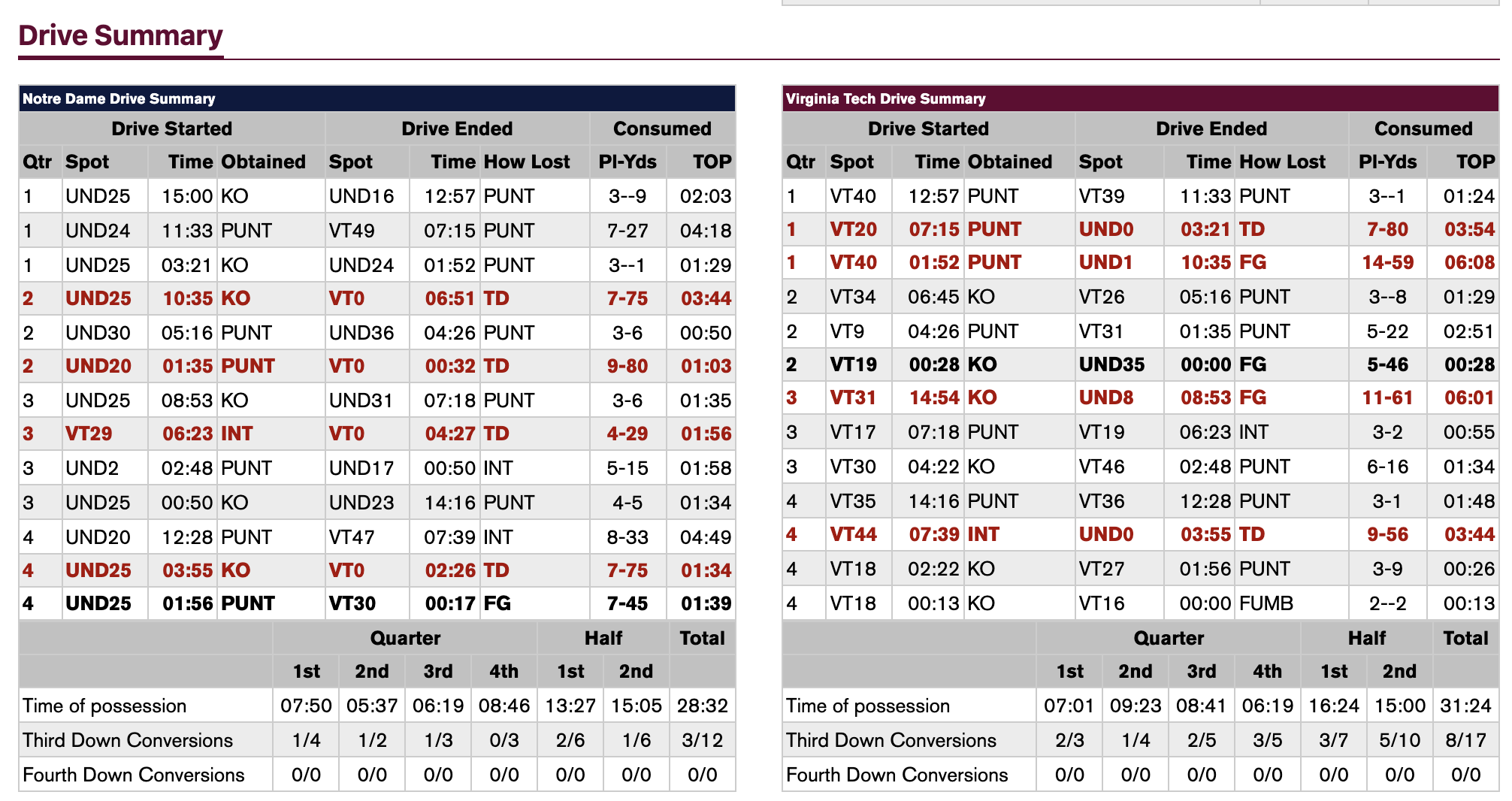