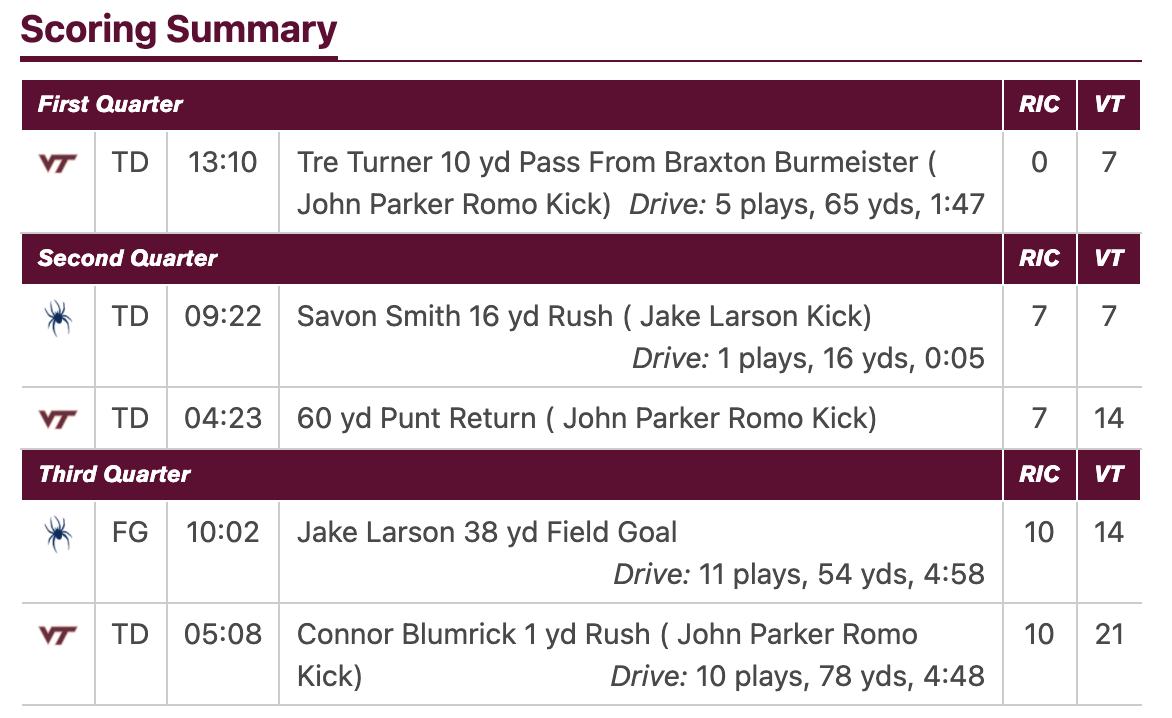 In a game where Richmond out-rushed Virginia Tech and only trailed by a score at halftime, the Hokies did just enough in the second half to pull away in the 21-10 win.

“I would say that we’ve played two pretty good defensive lines in the last two weeks,” Tech head coach Justin Fuente said after the win, “but that being said, we have been inconsistent. At times, it’s been pretty good and not nearly consistent enough to score like we’re going to need to score as the season goes along. We’ve got huge improvement to make.

“Shuffling the offensive line around shouldn’t matter. Those guys have played a bunch of snaps. It’s a byproduct of what we had to do, but as a whole, we’ve got to find a way to play better.”

Tre Turner and Tayvion Robinson each came up clutch for Virginia Tech (3-1, 1-0 ACC) at different points in the game.

Turner led the Hokies in receiving and hit the century mark for the third time in his career, finishing with six catches for 102 yards and one of Tech’s two first-half scores.

On Virginia Tech’s first series of the game, during which Turner had two big plays, quarterback Braxton Burmeister found the junior wide receiver on a ten-yard touchdown pass in the back of the end zone. Turner made a spectacular play to know where his body was and get his left foot down.

Oh, no he didn't 😳@tre11turner comes down with a wild #SCTop10 TD catch … CC: @SportsCenter

“That white line in the end zone or on the sideline isn’t going to move, so you just have to know where it is,” Turner said. “I knew I was in the air too long so I had to get one of my feet down and I just happened to get that left one down, luckily.”

Entering Saturday, Turner was Tech’s leading receiver with ten catches for 148 yards. He had a quiet day against West Virginia last weekend, though, with just two receptions for 17 yards.

He was huge against the Spiders.

“I love getting Tre the ball,” Burmeister said. “I don’t think it’s a question if I want to get him the ball or not. I’m going to give him a chance when he has a chance. I love Tre and he made a lot of big plays today.”

“I’m trying to remember all the catches, but there was two there that were definitely contested balls, and that’s what we’ve got to have,” Fuente said. “We’re not always going to get open by 10 yards. And he went up and was aggressive to the ball and made a couple plays, which I thought was what we really needed. And it was a good job by Braxton giving him a chance to go up and make those plays.”

Robinson had the other score, Virginia Tech’s first punt return touchdown since Greg Stroman in 2017. The Virginia Beach, Va. native caught Aaron Trusler’s punt at his own 40 and weaved his way through the Richmond punt unit. Nothing but clean mountain air in front of him.

“All week in practice, he [Shibest] was telling me it was going to be a weird look,” Robinson said. “Particularly that one, he had punted away from his coverage team, so I was like, ‘I’ve got to have a chance on this one.’ When I caught it, they always tell you to get north and south, and I did and I scored.”

It was a big play for Tech because, at the time, the game was tied. Without Robinson’s score, there’s a chance the game would’ve been level heading into intermission. As safety Tae Daley described it, it gave juice to everybody.

“It’s a breath of fresh air,” Tech linebacker Dax Hollifield said. “Tight game, that big play happens and it’s like, ‘OK, I can actually relax.’ Not relax, but it’s not as much stress, pressure when we go out there. That was a great play, a big-time play. I’m happy for our special teams and our PBR unit.”

Robinson finished with 195 all-purpose yards, a team-high. 76 yards came through the air on six catches, while 119 of them came in the return game.

However, after Virginia Tech’s first drive, the offense stalled. It took Burmeister & Co. five plays and 1:50 to go 65 yards for the opening score. Outside of that and a few chunk plays – many by Robinson and Turner – though, the offense was nowhere to be found.

Burmeister did complete 17 of his 27 passes (63%) for 212 yards and a touchdown, but the offense couldn’t move the ball. Outside of the Hokies scoring on their first play of the second half on one-yard quarterback run from Connor Blumrick, his second score of the season, the ball didn’t move much.

Tech outgained Richmond 318-237 in total yards but outside of the two scoring drives – 15 plays, 143 yards – only produced 175 yards. The Hokies ran 63 plays in the game. 23 of those plays went for one yard or less, and that doesn’t include two penalties, two sacks and an interception. 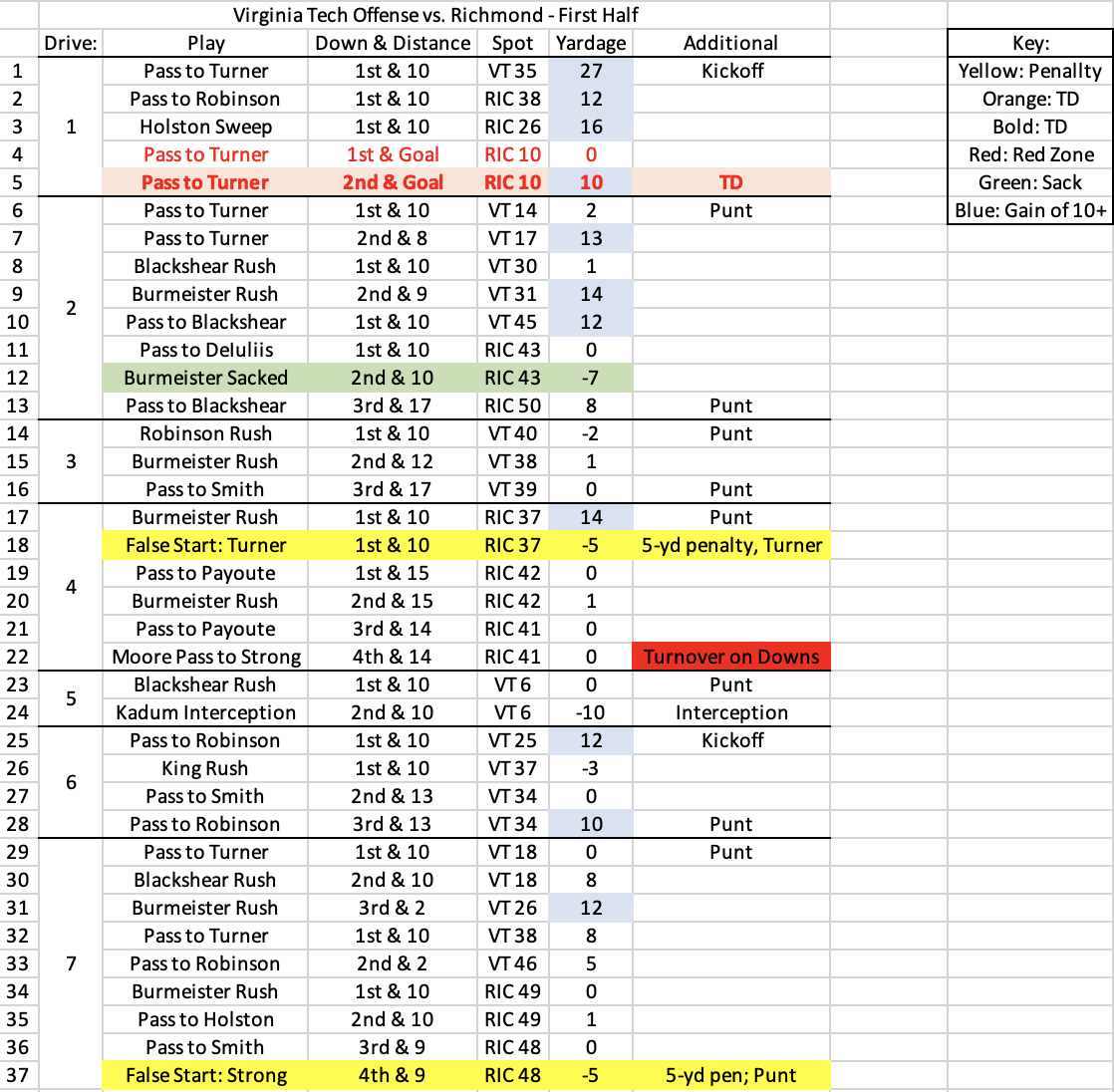 “I think we felt really comfortable with our starters and our opening plays,” Burmeister said. “I think we went out and executed those pretty well and as we got later, I think our execution went down.”

There was also a bizarre moment in the second quarter when, starting a drive on its own six-yard line, Virginia Tech threw backup quarterback Knox Kadum under center. Fuente said he told both quarterbacks during the week that Kadum would get one series in the first half of the game.

On your own six, though? Not on the drive earlier where the starting field position was the VT 49, or even at the 25 yard-line after a touchback? Fuente said the timing of Kadum’s entrance “was not prescribed.”

“I met with Braxton and Knox on Sunday of last week and told them at some point, Knox was going to play at some point of the first half,” Fuente said. “The facts were Knox was going to play at some point and also Braxton was going to go back in. … On first down, we run the ball and don’t help ourselves, we don’t get north and south. And now we’re in second-and-long, and Knox is in a tough situation, backed up on second-and-long, but that’s part of playing quarterback too, is being disciplined enough to go throw the ball away and go live to play the next down.

“I wish it would have turned out differently for him, but where the ball was should be inconsequential to how he performs.”

On second and ten from the six, Kadum threw an interception, which set up Richmond’s lone touchdown of the day. The pass was returned to the VT 16, and Savon Smith found a gap and took it for six on the next play.

Virginia Tech’s defense was put in a tough situation on that drive, having to defend with backs against the wall at its own 16. On the rest of their defensive possessions, though, the Hokies held their ground.

After Richmond QB Joe Mancuso picked up 29 yards on a quarterback keeper on the Spiders’ second play from scrimmage, when it looked like Richmond might pose a difficult threat for the Hokies, Mancuso left the game with an injury to his right index finger, according to John O’Connor of the Richmond Times-Dispatch.

That altered the gameplan offensively for the Spiders and Tech had to adapt to it. Richmond’s backup, Beau English, is a transfer from Air Force who is a skilled rusher. While he did throw the ball 23 times, completing 15 passes, he only picked up 77 yards. The Spiders had more success on the ground, tallying 160 yards on 36 carries (4.4 avg.).

“Third down is critical,” Hollifield said. “We have a lot of packages for third down because that’s money down. First and second down are one thing, but really getting off the field, getting our offense good field position and just, we don’t want to be out there. We want our offense to be out there as much as they can.”

“They deserve a ton of credit,” Burmeister said of his defense. “They keep keeping us in it. They are really consistent.”

Another player on the consistent front is Hokie punter Peter Moore. The freshman from Towson, Md. had to replace Oscar Bradburn this season. He’s stepped up to the challenge and been fantastic.

Through four games, Moore’s punted 19 times, including six against the Spiders. He’s averaging 43.8 yards per punt, has seven punts of 50-plus and eight that have pinned opponents inside the 20 yard-line.

He had three punts that were fielded inside the ten-yard line against Richmond alone – two at the nine and one at the three. Mighty consistent for a freshman.

“He’s just been really consistent and hasn’t been all nerved up for a guy that hasn’t played a lot,” Fuente commented.

“He’s taken over and done really well, done a really good job and I’m proud of him,” Hollifield said, echoing his head coach’s statement. “He’s been booting it really well and to see that out of a young kid, I know the future’s bright for the punt unit.”

For the first time in any Tech game this season on Saturday, an opponent started a drive on the other side of the 50. That was on Kadum’s pick, of course. That’s insanely impressive, though. Opponents have started inside their own 20-yard line 16 times and 39 times inside their own 30, out of 46 total drives. A lot of that has to do with Moore.

Can he keep up his consistency against another potential top-ten team in Notre Dame in two weeks?

Virginia Tech has an open week now ahead of hosting the Fighting Irish on Saturday, Oct. 9. That’s a week to get figure out why the offense has struggled, a week for the defense to get even better and a week to get healthy.

“I think this bye week is going to be huge,” Burmeister said. “Our leaders got to get together and go through everything. I felt like in the summer, we were really good at executing and doing our job. We went into fall camp with that and have kind of lost that a little bit. A lot of that is we need to rep our base calls and get really good at some things and go into Notre Dame game feeling good about those things and just roll.” 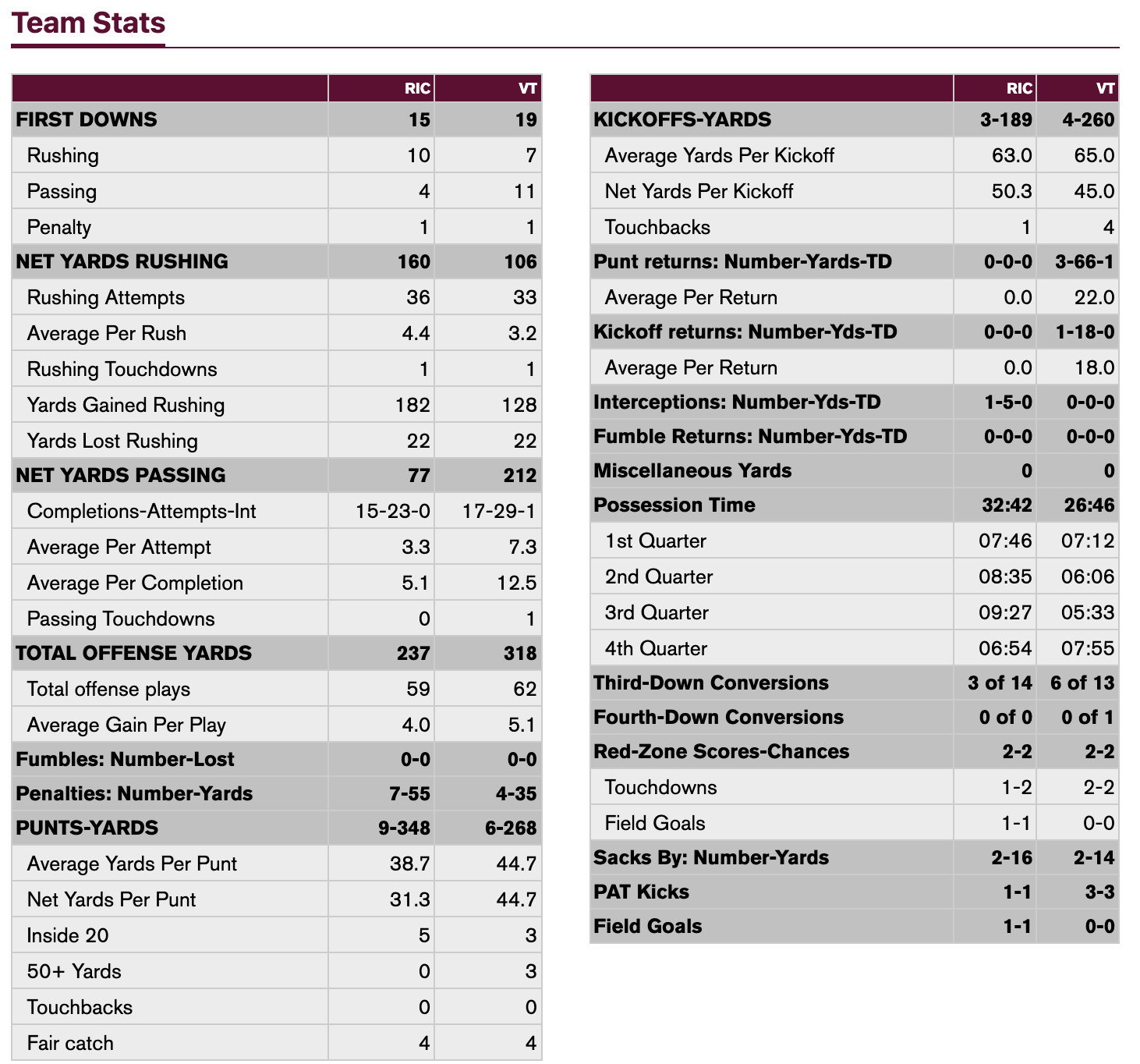 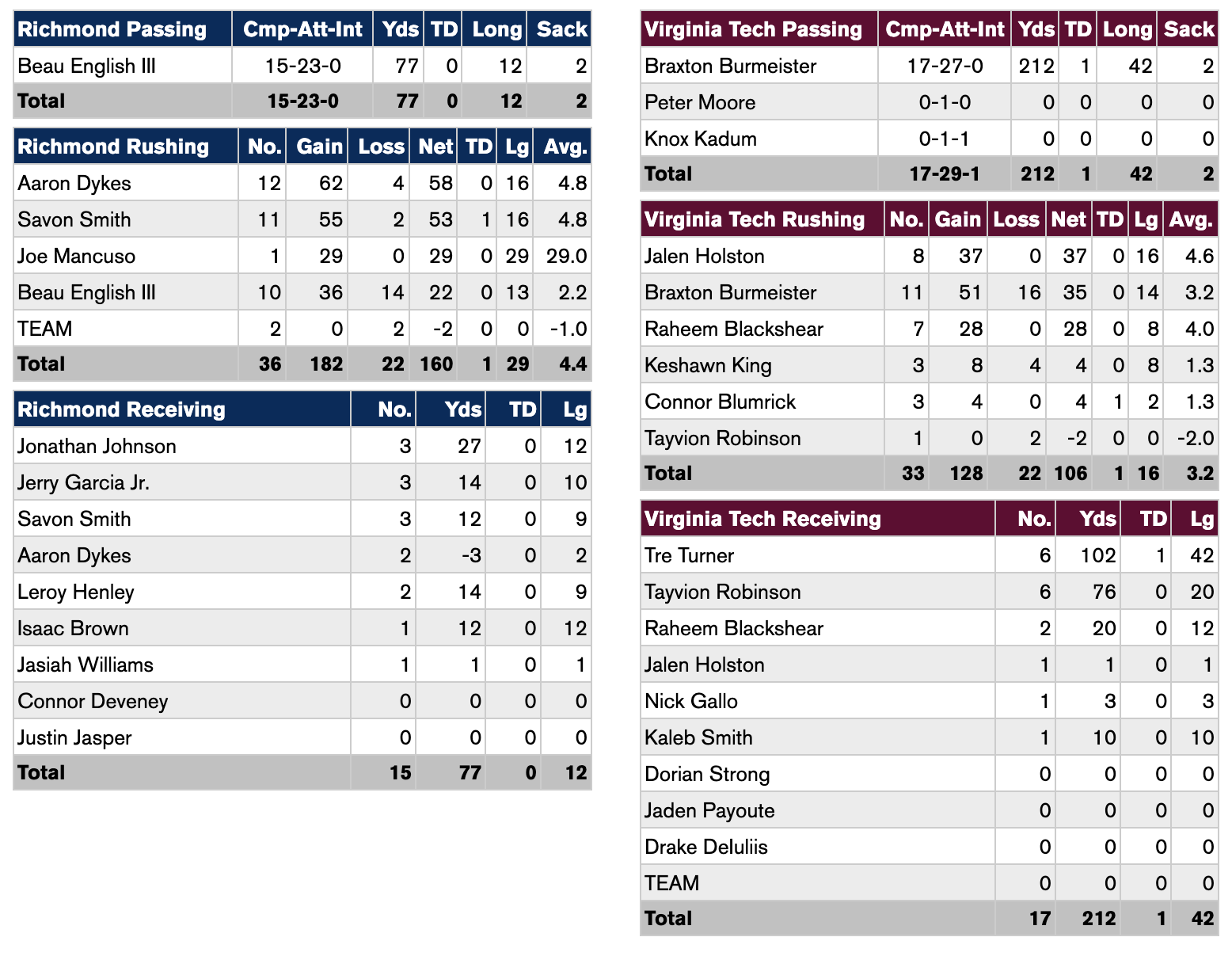 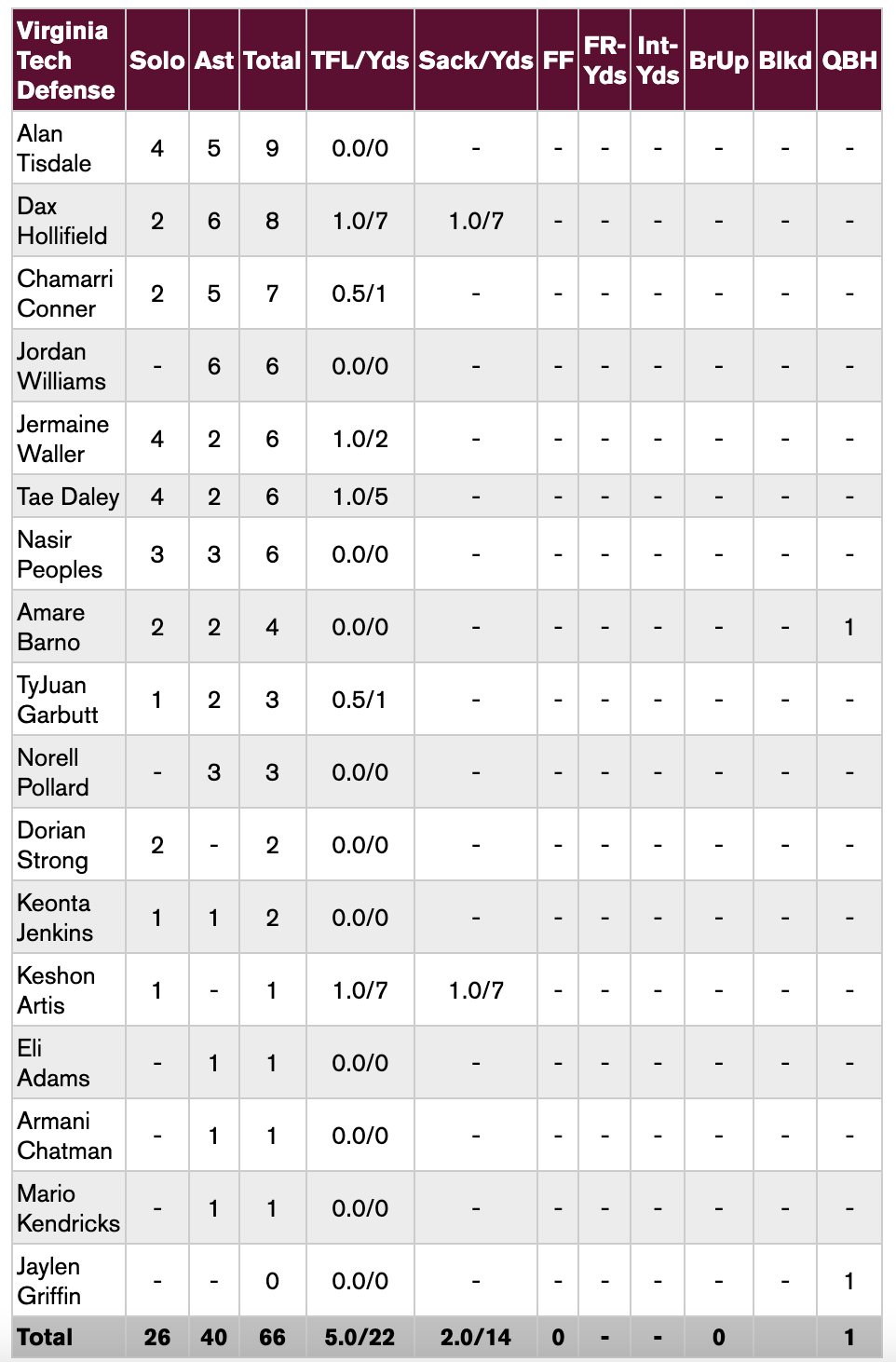