In sports, it’s easy for losses to tear teams apart. When groups face the tallest of challenges and the going gets rough, that’s when the team’s unity and bond is tested the most.

After fighting back and losing a heartbreaker at West Virginia, Virginia Tech’s locker room could’ve easily folded and started pointing fingers. That’s usually the easy route. But as left guard Lecitus Smith told the media on Wednesday, there was none of that, which impressed the redshirt junior.

“It’s a tough loss, but it is the third game of the season,” Smith said. “We have nine more to go, and we’re guaranteed nine more. That’s a lot of football to be played. What I see from this group, and what’s actually impressive because it hasn’t always been like this, we just came off a loss, guys were hurt, they were down in the locker room, but at the end of the day, we came back the very next day to practice and instead of walking into a locker room of guys pointing fingers and saying, ‘Man, it’s because of this, it’s because of that, it’s because the offense didn’t do this or the defense didn’t do that,’ there wasn’t any pointing fingers and that’s pretty cool to me because like I said, it hasn’t always been like that.”

Smith said it was interesting to hear teammates talk through things in the locker room, from the running backs talking about mistakes they made or the offensive linemen talking about film. He said in the past, the positive nature, willing to get better energy wasn’t always present.

“We actually got tighter after that loss, which was actually pretty impressive to me, that was pretty cool.”

There’s been a lot of criticism on social media of the players and coaches following the loss, to no surprise, with people thinking they know what the play calls were supposed to be or what the blocking assignments were on certain plays. There have been plenty of people calling for offensive coordinator Brad Cornelsen’s job, and complaining about jet sweep calls. The usual.

Dax Hollifield addressed that topic after the WVU game. It was in the heat of the moment after a tough loss, but it was a smart answer.

Smith was asked about it on Wednesday, and agreed with Hollifield’s statement and gave a long and thoughtful answer to a question from Aaron McFarling of the Roanoke Times. 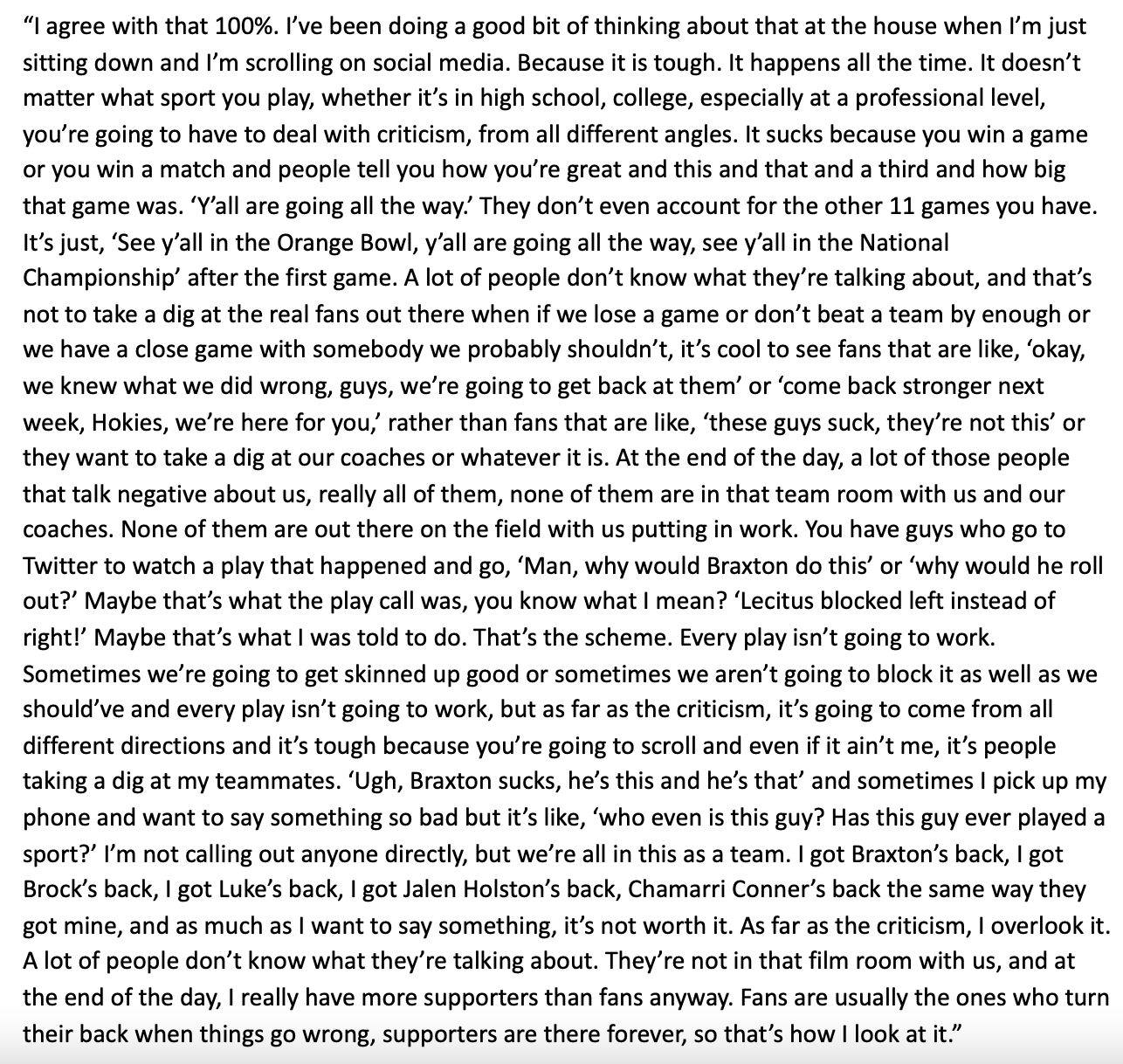 In the past, like Smith mentioned, the camaraderie wasn’t there. The chemistry and commitment towards a team goal wasn’t always there. There was obviously social media criticism, too, especially after the Hokies finished below .500 in 2018 and again in 2020.

It’s good to see that it’s become a tight-knit group. Like previously mentioned, negativity and losses can tear teams apart. The fact that Virginia Tech is “growing tighter” despite all of that speaks a lot to the leadership of the group. Smith touched on it on Wednesday, but the Hokies have a lot of older players.

“We’re an older group because a lot of our starters are older guys, and that’s actually pretty cool,” Smith said. “But it [the brotherhood] started way back in the summer, just caring about the guy next to you more than you care about yourself, honestly. More than you care about doing your job, you make sure you’re not only doing it for yourself but doing it so you don’t hurt the guy next to you, in a way. Us just coming together is something that’s been happening. It’s been the players caring about each other so much.”

Virginia Tech was very poor in many areas on offense against West Virginia, as detailed in previous articles this week. I wrote about Tech’s red zone struggles on Monday, while Brandon Patterson went into a lot of detail in his film review.

The Mountaineers sacked Braxton Burmeister six times on Saturday, including three times by Jared Bartlett, the Nagurski Trophy National Player of the Week. Tech also rushed for just 106 yards on 41 carries, an average of 2.6 yards. Combine that with the short field woes from inside the ten (12 plays, 10 went for zero or negative yards) and it was a poor offensive performance in many aspects.

It didn’t help that the Hokies lost right tackle Silas Dzansi in the first quarter to an injury, either.

“Those guys blitzed a lot, they blitzed hard, but I have no doubt in my mind that we can pick those things up, and that’s not an excuse at all. If we set at the same level, we’ll be able to pick up anything anyone throws at us, so watching the film, there are a few minor adjustments we need to make and we’ve definitely done it throughout this week at practice.”

Another thing that Brandon Patterson pointed out was how, at times, Tech’s offensive linemen seemed to be on skates vs. WVU. There were moments where Tech couldn’t get anything going up front because the offensive line was getting roughed up, which Smith mentioned to the media on Wednesday.

“The biggest thing that I noticed [from watching film] was that we honestly need to get more push as an offensive line,” Smith said. “It’s kind of like I said, you get on social media and hear a million different people saying a million different reasons they don’t know, ‘oh, it’s this or it’s the playcalling or coaching or whatever.’ No. We put it on our back, we put this team on our back, we understand this team moves as we move, and if we want to score in the red zone, we need to get more push on the offensive line.

“It doesn’t matter if a defense is bringing different blitzes at us, if they bring a cat blitz or whatever type of blitz they bring, we’ve got to be able to pick it up. We’ve got to be able to go north and south. They have to have a hole in the middle if we’re running an inside zone, so our backs can get up in it and score, so that’s the biggest thing I see, no matter if they’re blitzing or bringing a linebacker off the edge or whatever it is, we’ve got to be able to pick it up and communicate a little bit better and get a lot better push up front. That’s definitely going to help us do better in the red zone as an offense.”

Richmond’s defensive line, like Fuente said on Monday and Chris Coleman pointed out in the game preview, is big and physical. Saturday’s game against the Spiders’ defense will pose another challenge for Tech after a week of fixing mistakes from a disappointing road defeat.