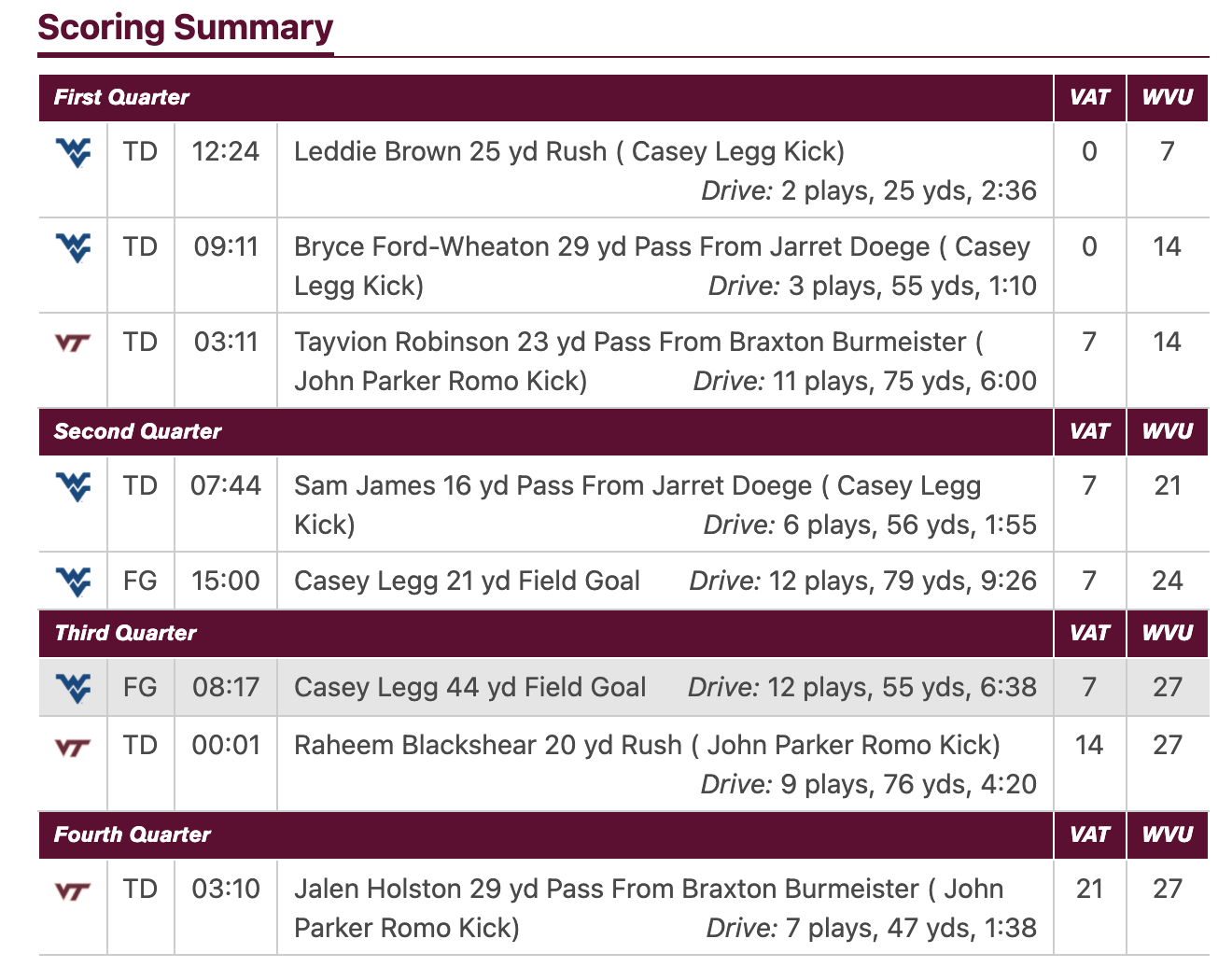 It was the tale of momentum swings in Morgantown on Saturday. At first, it was all West Virginia. No. 15 Virginia Tech trailed by three scores at intermission. Yet less than 30 minutes later, the Hokies had a chance inside the five-yard line to win the game as the clock winded down.

However, Virginia Tech had done twice previously in the game, it came up just short inside West Virginia’s ten-yard line, falling to the Mountaineers 27-21 as the golden-filled Milan Puskar Stadium sang John Denver’s “Take Me Home Country Roads.”

“That was an incredible college football game, great atmosphere,” Virginia Tech head coach Justin Fuente said following the loss. “Obviously, it’s a pretty tough locker room right now. Incredible fight and battle to find a way to have a chance to win the football game. We did not play well in the first half.

“Our guys came back the second half and really just kept fighting and scratching and clawing. We had a chance to win the game there. … I’m proud of our players and disappointed in my ability to have them ready to play better in the first half.”

From the get-go, it was all West Virginia (2-1) on Saturday afternoon. Leddie Brown’s 80-yard rush, which he took to the house untouched on WVU’s second play from scrimmage, summarized the first half.

The Hokies (2-1, 1-0 ACC) came out flat in the Battle for the Black Diamond Trophy and never fully got any traction in the game. It didn’t help that their counterparts took off like a start in a drag race and went up 14-0 in the first six minutes. The Mountaineers’ first two drives consisted of five plays, 135 yards and two scores.

Virginia Tech gained 144 yards in the first half, but it didn’t feel like it. On Tech’s seven possessions, it punted four times, turned the ball over on downs once, missed a field goal and scored a touchdown.

Despite that, however, Virginia Tech battled. The defense, which was torched for 24 points and 270 yards in the first half, only allowed 48 second-half yards and a field goal. They forced WVU quarterback Jarret Doege into two turnovers, too, and the offense finally found some sort of rhythm and put up 14 points.

“We’ve got a bunch of veteran guys,” Tech linebacker Dax Hollifield, who finished with a team-high ten tackles, said. “I know what it takes. When we were down 14-0 or 21-7 or whatever it was, I wasn’t fazed. I’ve seen two scores happen in a minute in college football. It’s no problem. You’ve just got to keep fighting, take it a play at a time. It’s not going to happen all at once. You’ve got to take it one play at a time and it’ll work out.

“We trusted each other and we knew our scheme was just as good as their offense, if not better. We knew it was better. We’ve just got to execute, and we showed that in the second half. We just came up short. It is what it is.”

“We’re definitely a bunch of fighters,” Tech center Brock Hoffman said. “We’ll fight until the clock says 0:00. But we just have to start faster. It wasn’t an easy second half. We had to fight our whole way back, but if we start faster, that first half and the game will go our way.”

Virginia Tech had three possessions throughout the game inside the West Virginia ten-yard line, including the final possession set up by Waller.

At the end of the first half, Raheem Blackshear returned a kickoff 78 yards to the WVU 22. Looking for an answer to the Mountaineers’ explosive first half offense, the Hokies stalled. Tech gained a first down and had first and goal from the ten, and even got up to the two-yard line after a run from Braxton Burmeister.

After the two sides traded timeouts, Tech right tackle Tyrell Smith was called for a false start. That moved the Hokies back to the seven, which created a tough third down opportunity. The Hokies didn’t convert, John Parker Romo missed the 24-yard field goal by a few inches to the right and the momentum stuck with West Virginia at halftime.

Early in the fourth quarter, TyJuan Garbutt stripped Doege and forced a fumble, which Tech recovered. It set the Hokies up at midfield, and Fuente & Co. were methodical, slowly moving the ball into WVU territory. After Jalen Holston skipped into the red zone, though, the Hokies faltered.

From the eight-yard line, Burmeister threw an incompletion, Holston rushed for three yards, Tre Turner lost one yard on a sweep and Burmeister was sacked on a fourth down attempt. The momentum was killed.

When Burmeister and the offense had their final chance of the game, they couldn’t move the ball past West Virginia’s three-yard line. A rush for no gain, a rush for a loss of one and two incomplete passes followed.

“We struggled up and down running the ball today,” Fuente said. “Then we were behind. There was a time in there where we didn’t have the luxury of trying to run it. I think it centers around that in terms of running the football. We missed a couple plays obviously to get touchdowns down there.

“We were pretty shoddy. Inconsistent to say the least.”

Smith, who was fifth on Tech’s receiving list entering Saturday with three catches for 25 yards, pulled in a team-high six catches for 62 yards. In the previous two games, he excelled at the non-stat sheet factors, like blocking, which was evident in his team-high run blocking grade (86.3) against North Carolina. On Saturday, he came to play.

“It’s great to see Kaleb gets some balls,” Fuente said. “For the first two weeks, Kaleb has done a lot of the … dirty work for our football team in terms of being a core special teams guy that’s doing the blocking for the return game. And he’s been blocking and playing really well on the outside. Just hasn’t gotten a lot of opportunities, and he got some opportunities today. It’s good to see him come through and make those plays.”

Robinson was solid, too. He had three catches for 47 yards, including the 23-yard touchdown reception from Burmeister in the first half. He and Smith made some big plays when needed late in the game.

Overall, though, it was a sloppy and flat performance. Sure, Tech’s defense played very well in the second half, but the Hokies shot themselves in the foot too many times. VT had six penalties, including four false starts, and Burmeister was sacked six times. Combine that with not converting three-of-four red zone trips and that hurts.

The Hokies scored from distances of 23, 20 and 29. When a team can’t convert in the red zone, though, it’s damaging.

“I felt like we called the right plays,” Robinson said. “You make mistakes, can’t execute, then it goes against you. … Go to film tomorrow, learn from it and just adjust.”

Virginia Tech now turns its attention to Richmond. The Hokies host the Spiders (2-0) on Saturday at noon. A captain and a leader, Hollifield message to his teammates is to stick together.

“I’ve seen losses like this tear a team apart,” Hollifield said. “We can’t let that happen. I talked to a lot of the leaders on the team, trying to keep this team as one. That’s really our main goal right now. Come back and have a great week, win this week, and then go into the bye, rest up.” 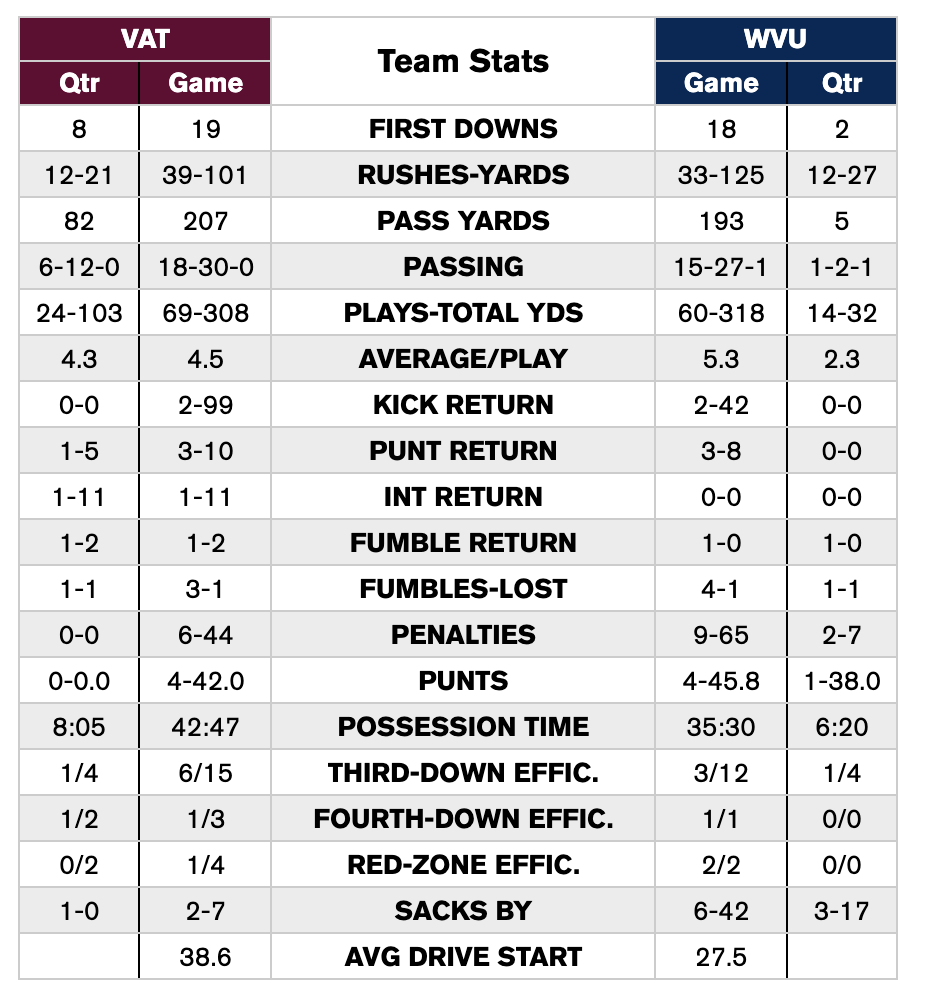 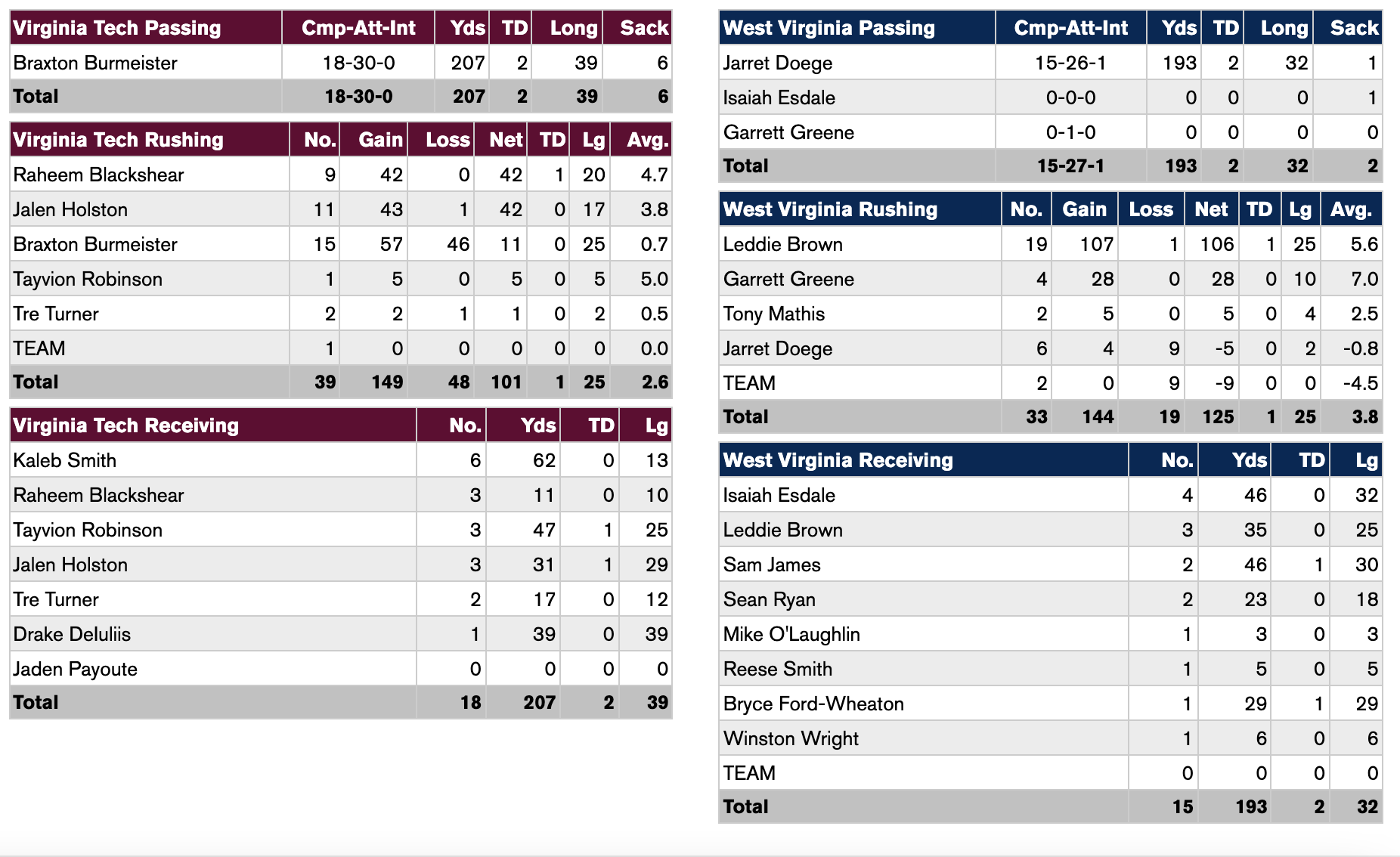 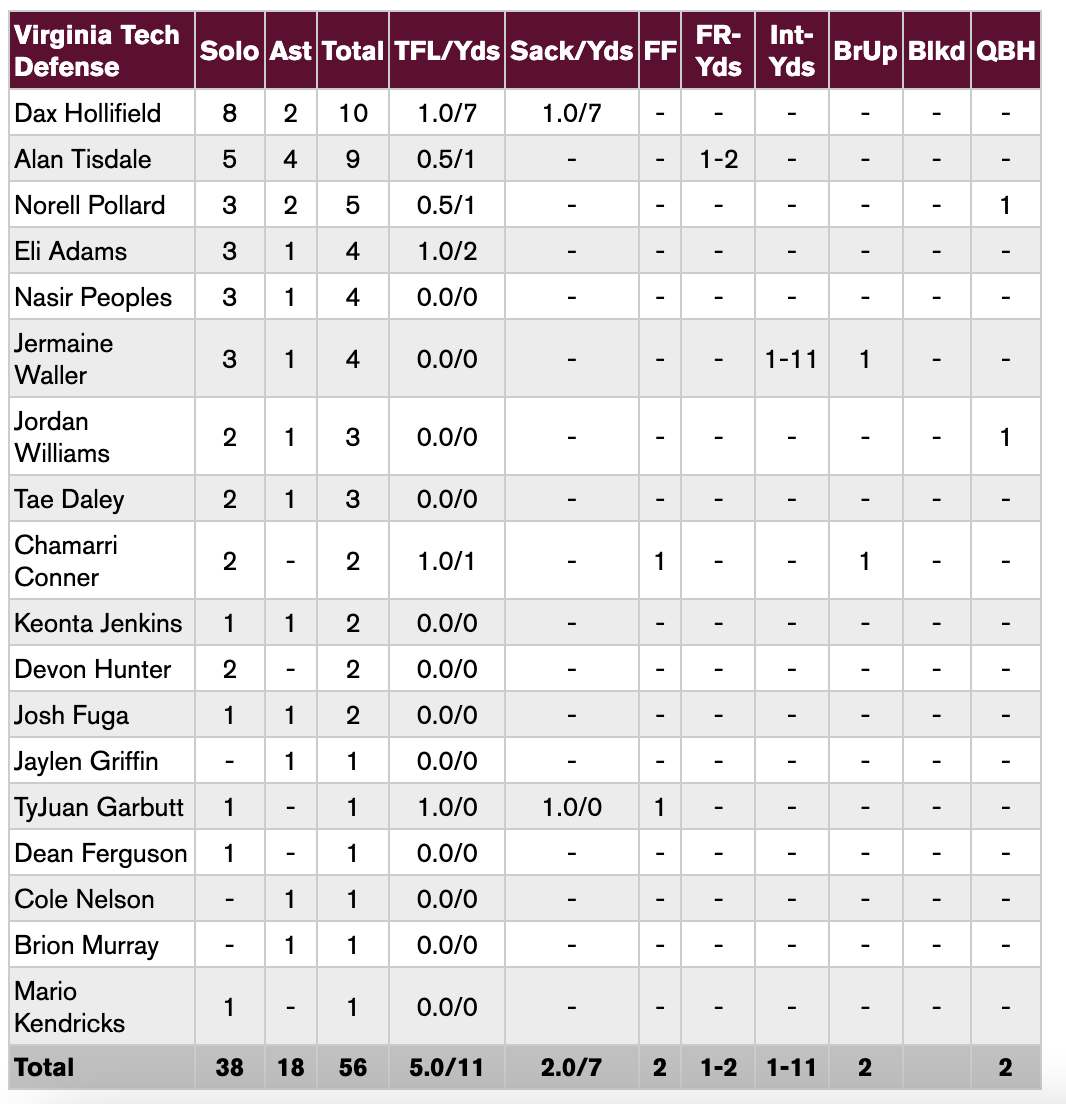 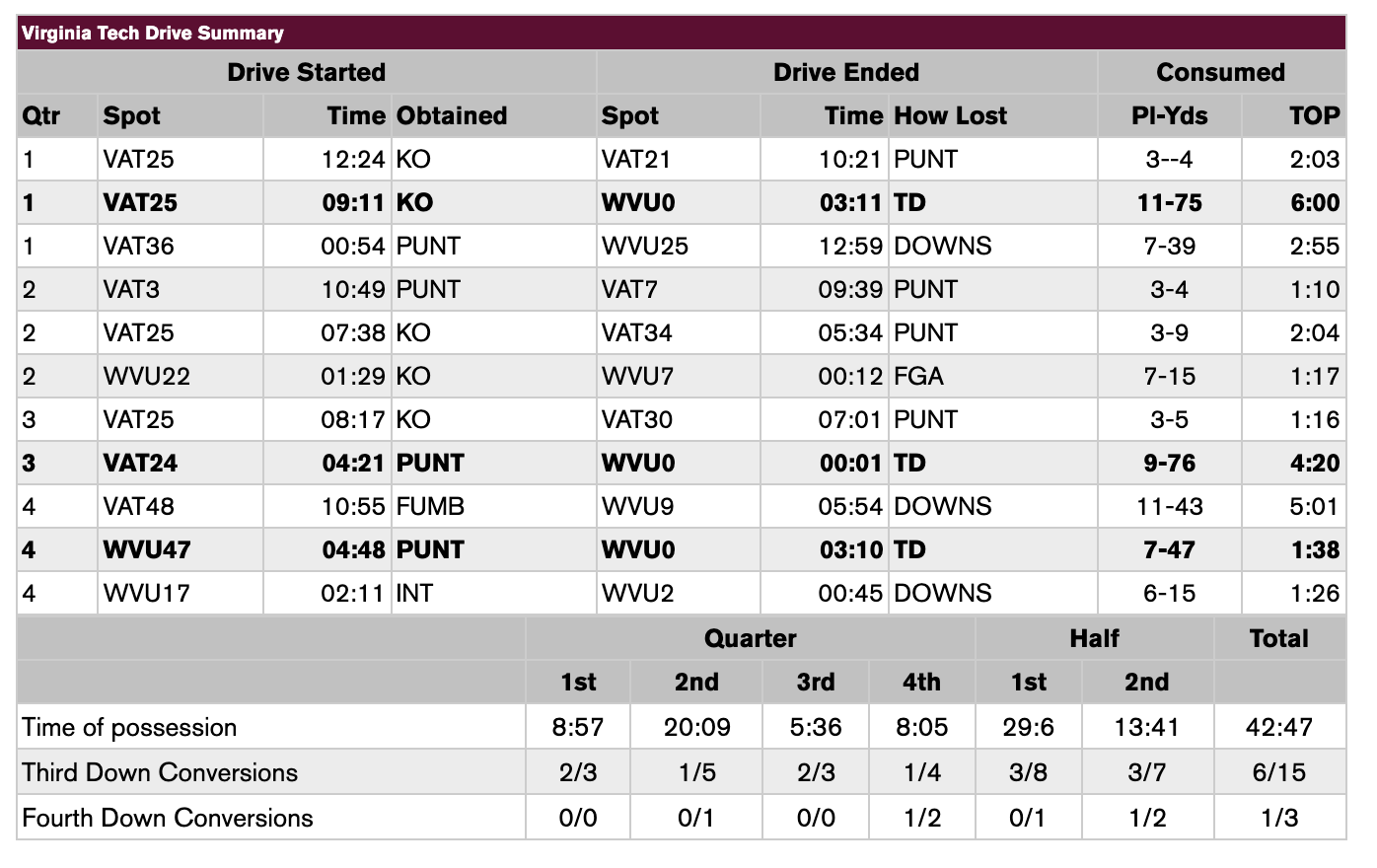