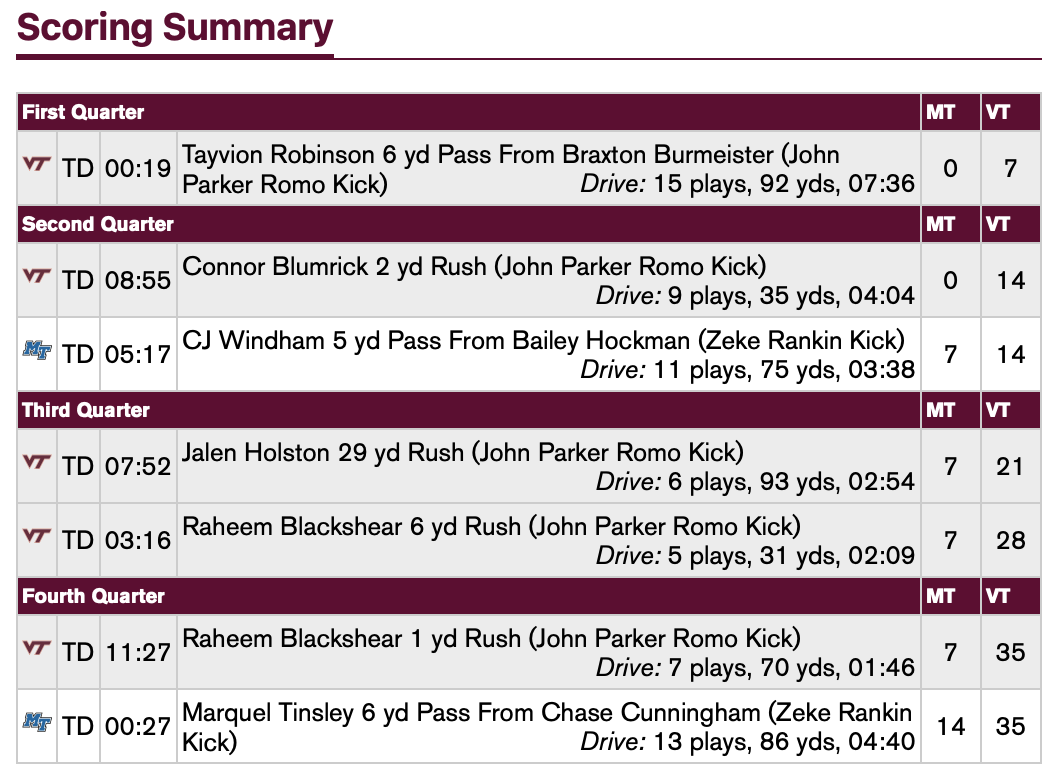 Despite a close game at halftime, No. 19 Virginia Tech pulled away from Middle Tennessee in the second half of a 35-14 win in Lane Stadium.

“Our guys were ready to play,” Virginia Tech head coach Justin Fuente said. “I do feel like when we got up 14-0, there was a bit of a lull there. Not just because they went down and scored, but it was just a little bit of relaxation. We went and recaptured that back in the second half and took care of business.”

On Tech’s six first half possessions, it scored two touchdowns and punted thrice. Tayvion Robinson found paydirt at the end of the first quarter off a six-yard toss from Braxton Burmeister. Connor Blumrick saw his first action of the season and powered it in from two yards out with 8:55 to play in the second quarter. Still, Middle Tennessee hung around, making fans a little nervous.

Down 14-0, the Blue Raiders (1-1) ripped off an 11-play, 75-yard drive that culminated in a CJ Windham touchdown reception from Bailey Hockman. The Hokies led by one score heading into the break.

After an even first half that saw the Hokies (2-0, 1-0 ACC) barely edge out the Blue Raiders on the scoreboard (14-7) and in yardage (141-135) at intermission, Fuente’s group found its groove. The team regrouped in the locker room at the break and came out a different team in the second half, and it showed.

“At halftime, it was obviously a tight ball game,” Fuente said. “I didn’t feel like we were shocked that it was close, you know what I mean? I don’t know that we are the team that can just blow the doors off people. That’s kind of not how we are built right now. I didn’t sense any panic or shock. That’s what happens to teams that are overconfident or arrogant. They get in there and they are shocked that the team wants to play.

“We knew what we were getting into. There was no shock. No panic, just guys ready to go out there and play.”

Virginia Tech struck quick in the second half. After the offense sputtered on the final two possessions in the first half, the Hokies scored touchdowns on their first three second half possessions and put the game to bed.

Burmeister & Co. went quick – all three scoring drives were seven plays or less, and no drive went over three minutes.

Tech went up two scores thanks to a 29-yard scamper from Jalen Holston when he juked two defenders and had nothing but clean mountain air in front of him. Tre Turner’s wide open 47-yard catch got things rolling, though.

After the score, the Hokies forced a turnover defensively. On third and 12, Hockman rolled left and tried to hit Jarrin Pierce on a crossing route over the middle. Jermaine Waller snatched it out of the air before he had a chance, though.

The huge shift in momentum really opened up the game. Raheem Blackshear skirted into the end zone on a six-yard run to put the Hokies up 28-7, and after forcing a turnover on downs defensively, Blackshear scored again to seal the victory.

Burmeister (8 rush, 52 yards) and Holston (5 rush, 31 yards, 1 TD) got involved, too. Even Blumrick (3 rush, 38 yards, 1 TD), Tech’s third string QB who the Hokies used in a few special scenarios, moved the ball, including a 33-yard keeper that set up Tech’s last touchdown.

“Let me tell you: this is a difficult scheme to run the ball against,” Fuente said. “They’re from the Pat Narduzzi era of, ‘you can’t run the ball for two yards. We’re going to dedicate all of our people to the run game and mixing in blitz and all that sort of stuff with it. And make it very difficult, regardless of what league you play in.’

“I did think that we did a good job there of finding ways to run the football. There were a few times that the ball got to the unblocked hat and we out-athleted them a little bit to go make the first down or make a run that should have been three yards to seven or eight or nine, which is what you’ve got to do against that type of scheme. So overall, without watching the film, I thought we blocked them and ran hard.”

While the offense scored to put the game away, Virginia Tech’s defense came up big.

MTSU punted once (9 plays, 40 yards), threw the interception to Waller (6 plays, 24 yards) and turned the ball over on downs (11 plays, 47 yards) on three straight possessions. The Blue Raiders got to Tech’s 35 twice but couldn’t do anything.

That started with the Hokies stopping the run, which they did very well. MTSU finished with 36 carries for 66 yards (1.8 avg.). In the second half alone, Tech held Middle Tennessee to 55 yards on 23 carries.

“We just knew we had to pick it up,” Hokies defensive tackle Jordan Williams, who finished with three tackles, half of a TFL and half of a sack, said. “We needed more juice, we had to keep going and we had to bring that energy. Defensively, we wanted to be the ones to set the tone coming out of the half.

Tech improved in many phases of the game from the season opener, including passing (Burmeister finished 14-24 for 142 yards and a TD) and special teams.

The Hokies had two huge special teams plays – a 56-yard kick return from Keshawn King on the opening drive and a 59-yard punt return from Tayvion Robinson, which VT scored on – that helped turn the tide. Punter Peter Moore was great, too. He had a 50-yard punt in the first quarter and three of his four punts pinned MTSU inside the 20.

“They gave us a couple of opportunities and we had huge plays,” Fuente said. “To get the PBR unit, that’s the unit that, quite honestly, underperformed dramatically last year… I think it has a chance to be a weapon for us. It was nice to see that pay off with Tayvion’s big return.”

One of the most important things from Saturday is that the Hokies got their backups and young players some reps. On Tech’s last defensive drive, the lineup looked like this:

“It was good to get some guys in the game,” Fuente said. “We needed really good work; we got some situational work on the defensive side of the ball down there in the red zone. I wish we could have kept them out, but it was good to get that work for all those guys. We played a bunch of people. I was pleased about that.” 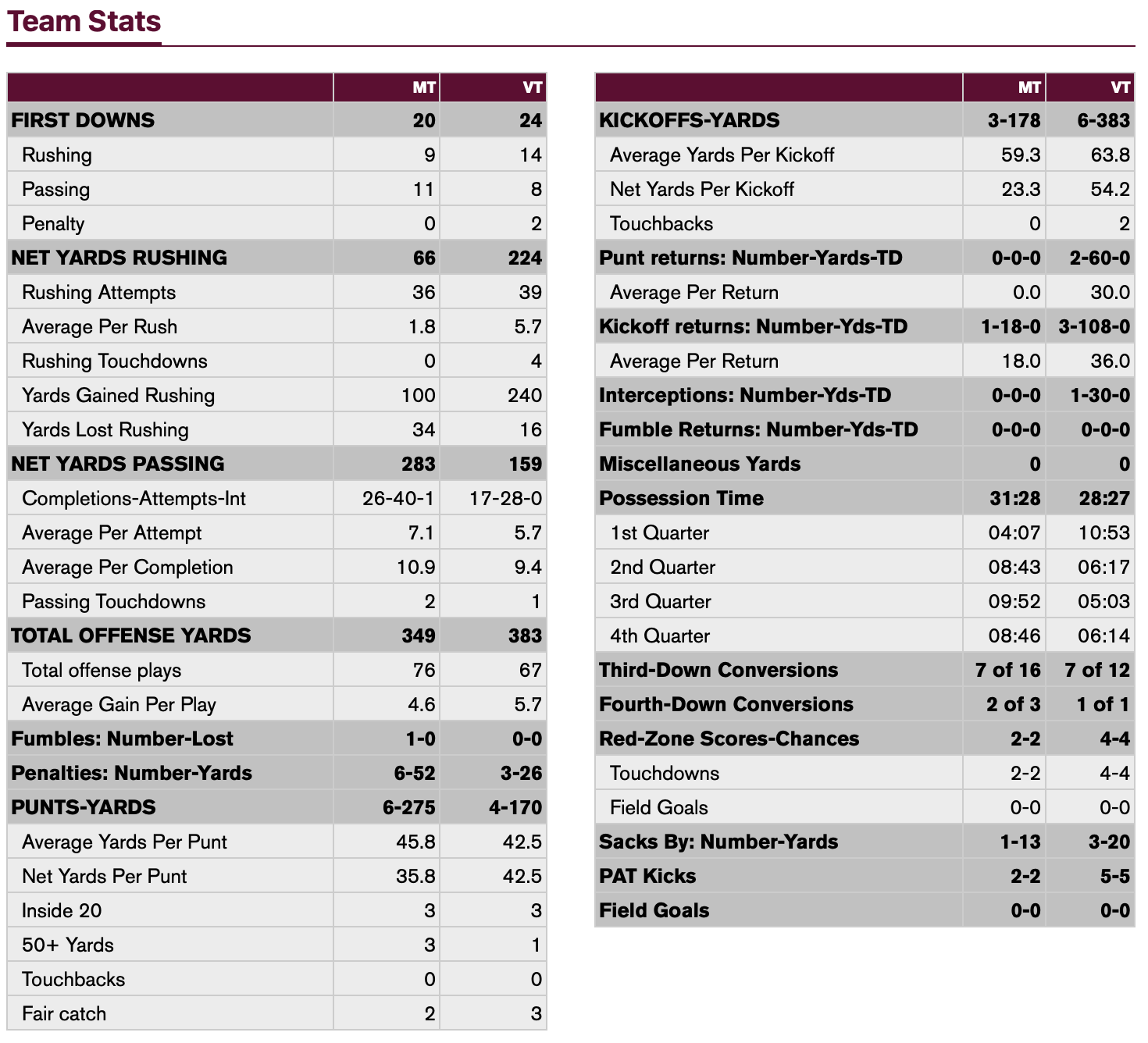 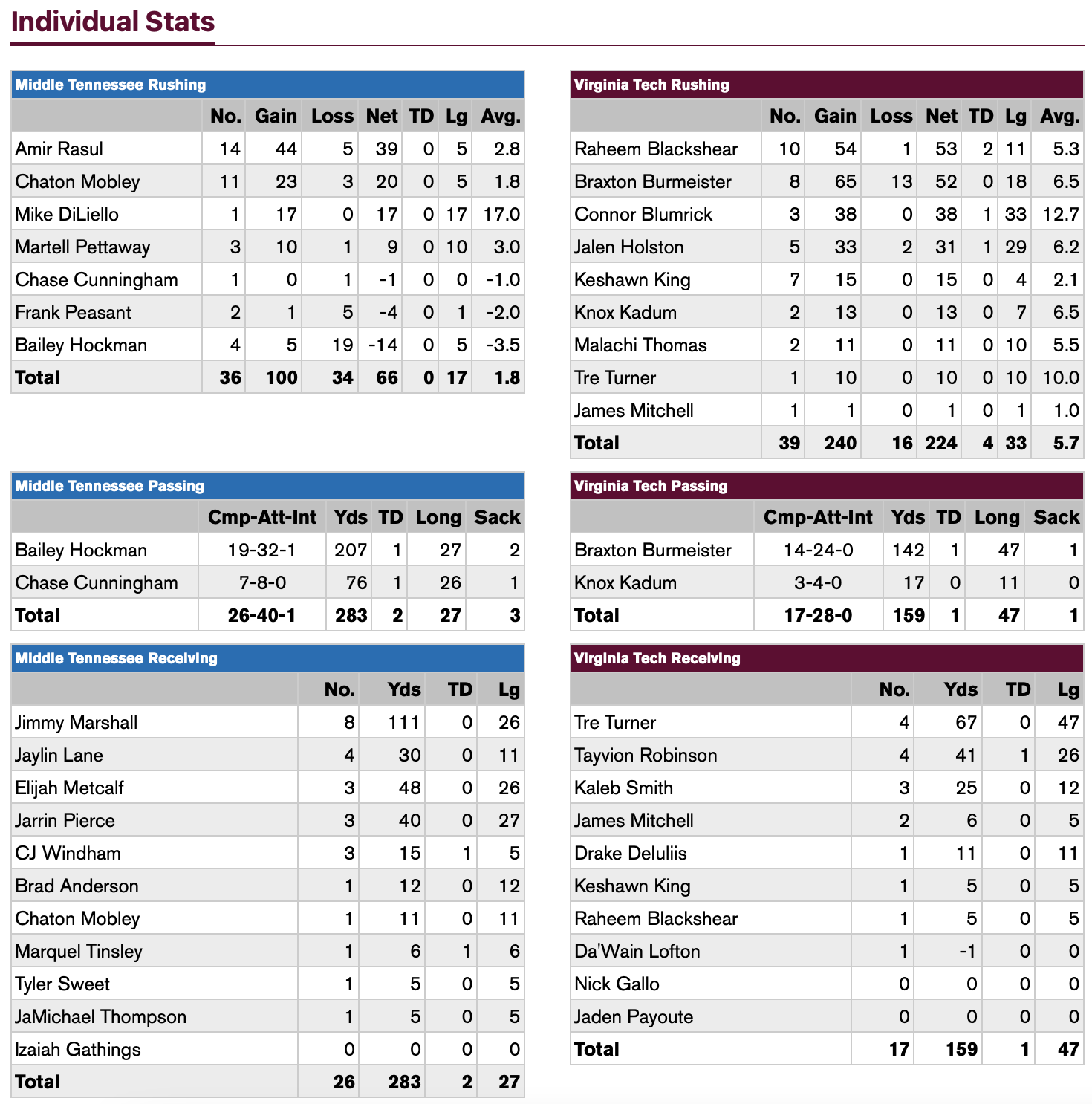 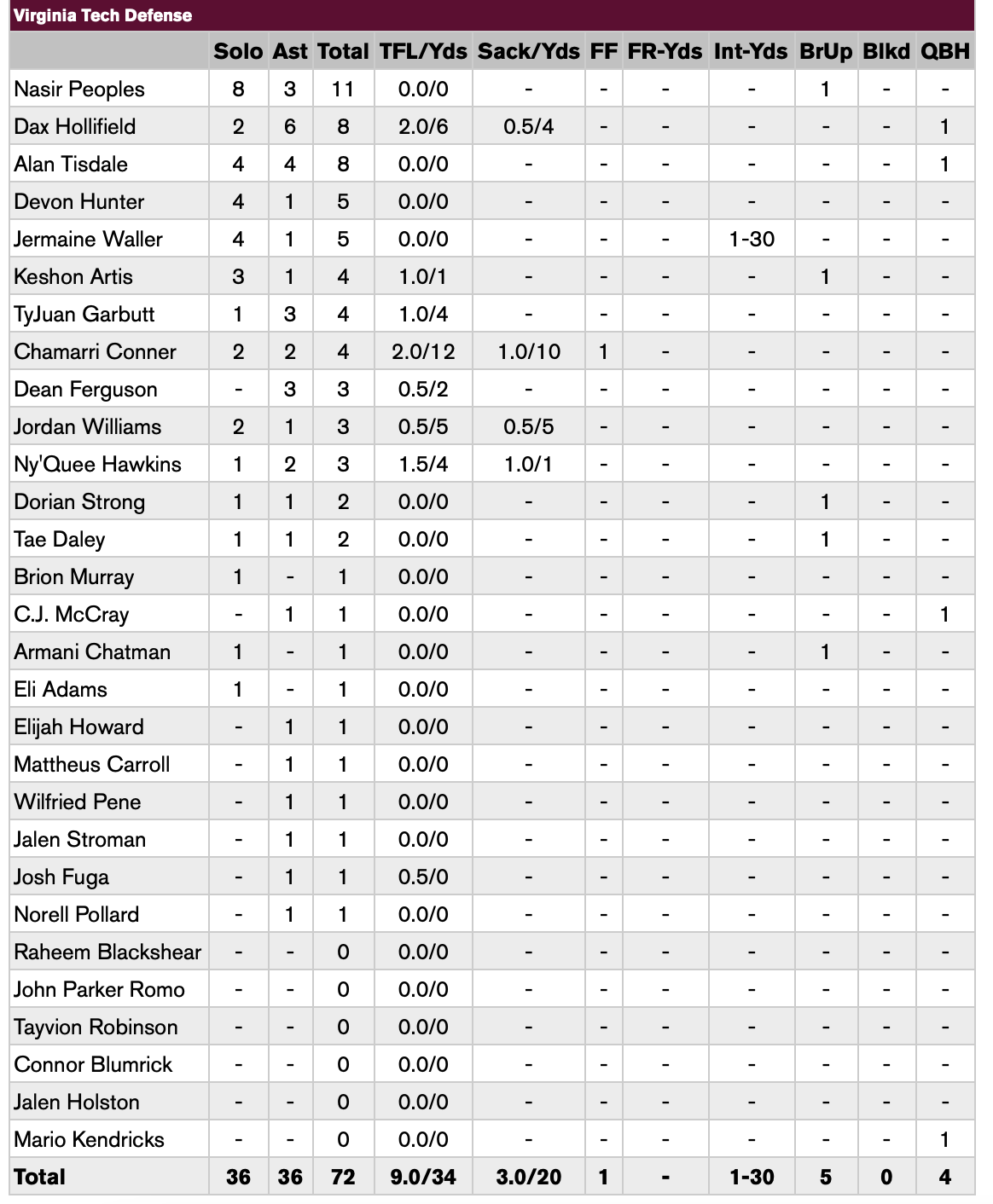