For the past three seasons, Rayshard Ashby was the staple among Virginia Tech’s linebackers, starting 35 of 37 games in that span. The Chesterfield native graduated this spring, passing the torch to Dax Hollifield and Alan Tisdale.

Over the past three seasons, Hollifield started 25 games at backer for the Hokies. He started 19 in a row, including all of 2019, but rotated with Tisdale for the starting spot last year.

With Ashby gone, Hollifield is now at mike, which is his natural position and where he said he feels most comfortable. Tisdale will play backer, where he started five games last season.

How will Virginia Tech’s linebackers look now that Ashby has moved on?

Dax Hollifield (6-1, 239, Jr., Shelby, N.C.): Hollifield has waited in the wings for his moment to play mike linebacker at Virginia Tech. That’s what Bud Foster recruited him to play, and he’ll finally get his chance there this season.

“I’ve been waiting for this opportunity [to play mike] for the last three seasons,” Hollifield said during Tech’s media day in early August. “I’m very happy going into this season. I’m finally at the position I was recruited to play, and I’m very happy with that.”

He’s played 1,650 snaps in the maroon and orange, which is the most out of any current Tech defensive player over the last three seasons. 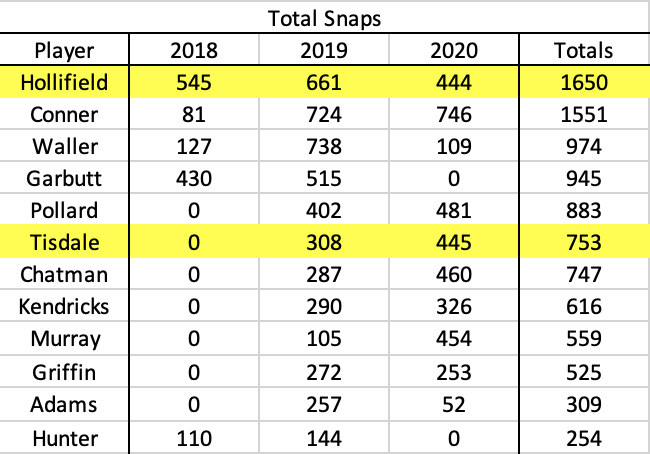 “He’s as close to perfection as you can possibly ask from him,” linebackers coach Jack Tyler said of Hollifield on Tuesday. “Having a guy with that leadership and skillset at that position is awesome.”

Tyler said Hollifield goes above and beyond in everything, from the weight room to the classroom and is “another coach on the field.” In year two in Justin Hamilton’s scheme, an experienced player at mike calling the shots is a huge plus.

He was sixth on the team in tackles last season and fifth in 2019. Hollifield should be even more productive now that he’s had a full offseason in a role that he’s most comfortable in.

“It’s almost impossible [to install a defensive scheme with limited practice], in my opinion,” Hollifield said. “Especially with people who have only really known one system, with Bud’s. You’re learning a whole other set of terminology, calling everything different, without practice, it was very difficult. It wasn’t until [later in the season] that we started putting everything together and actually having a functional defense that made sense against everybody else. But this offseason we got all of those kinks and quirks out, and it’s a lot better.”

His snap count has increased each year he’s played. Like Hollifield, a full year under his belt in Hamilton’s scheme can only help. Tisdale ranked third on the Hokies last season in tackles with 59, seven more than Hollifield.

Tisdale has made important strides over the offseason, both on and off the field. He gained 18 pounds this offseason, a jump from 210 to 228, and had a son, which has changed his life.

“When you have a son in college, your whole life has to change,” Tisdale said during Tech’s media day. “Everything revolves around him. You make a mistake, you fail your son. When you succeed, your son succeeds. That’s how I look at it. I’m just trying to make gains for him.”

“I’m really pleased with Alan,” Fuente said in early August. “He’s really matured. I don’t mean physically; I just mean emotionally. He conducts himself like a grownup now, and treats his diet like a grownup. … I’m really pleased, not just with how he looks, but with the way he’s living his life and the way he’s going about his business. It’s been really impressive.”

Tisdale has two seasons of experience under his belt now. Hollifield has three. They both played alongside Ashby, too. At times last season, Tech’s linebackers looked slow and a bit behind the game. This offseason has shaped both Hollifield and Tisdale, and they’re coming out of it confident.

The Rest of the Rotation

Behind Hollifield and Tisdale are Dean Ferguson and Keshon Artis, along with a few younger players. Tyler heavily praised Ferguson (6-2, 228, r-Fr., Sterling, Va.) and Artis (6-0, 240, r-So., Chesapeake) on Tuesday, as did Hamilton and Fuente.

The head coach said the two have had “as good of camps as they’ve ever had” and that he’s been impressed with them so far this offseason.

“It’s a little bit of an oddity in today’s game to have some older players like that that maybe aren’t the marquee names that you have, but those guys are incredibly important to your football team,” Fuente said. “When I think of [Anthony] Shegog in 2016 as a senior that was a really, really good player that wasn’t a starter that was hugely impactful on our football team, that’s kind of where Keshon and Dean are.”

“They’ve both taken the next step forward as linebackers,” Tyler said of Ferguson and Artis. “I trusted them before, but they’ve taken that next step. They’re all going to play a bunch and all four [Hollifield and Tisdale] I trust to play at a high level and help us win.”

Artis has been working at backer behind Tisdale, while Ferguson has been behind Hollifield at mike. Also in the mix is C.J. McCray (6-3, 221, Fr., Charlotte, N.C.), a transfer from Marshall who arrived in the spring.

“He’s a talented guy,” Hamilton said of McCray. “We wish we could’ve gotten him here sooner to work with him a little bit, but you look at him and see that he’s got a skillset that’s multi-faceted. He’s still trying to figure it out a little bit as far as where exactly is the best spot, but he’s done everything we’ve asked him to do. He’s an awesome kid and I’m glad he’s a part of the program.”

Though all listed as true freshmen, Rudolph was in Blacksburg in 2020, where he saw action in seven games on special teams. He was moved to backer in the spring after spending much of last season at safety.

Johnson will miss the entirety of 2021 with a shoulder injury.

Still, it’s an exciting group that has lots of promise in Tyler’s eyes.

“I’ve got a bunch of young guys in the room and it’s fun because you get the perfect mix of Football 301 and Football 101,” Tyler said. “Jaden Keller is a budding superstar at linebacker, Will Johnson is going to be a star, Lakeem Rudolph has really made great strides at the linebacker position, a position he’s never played before. The room is vast with highly talented and wonderful kids at the same time. They’re a pleasure to be around because they do everything the way they should be done.”