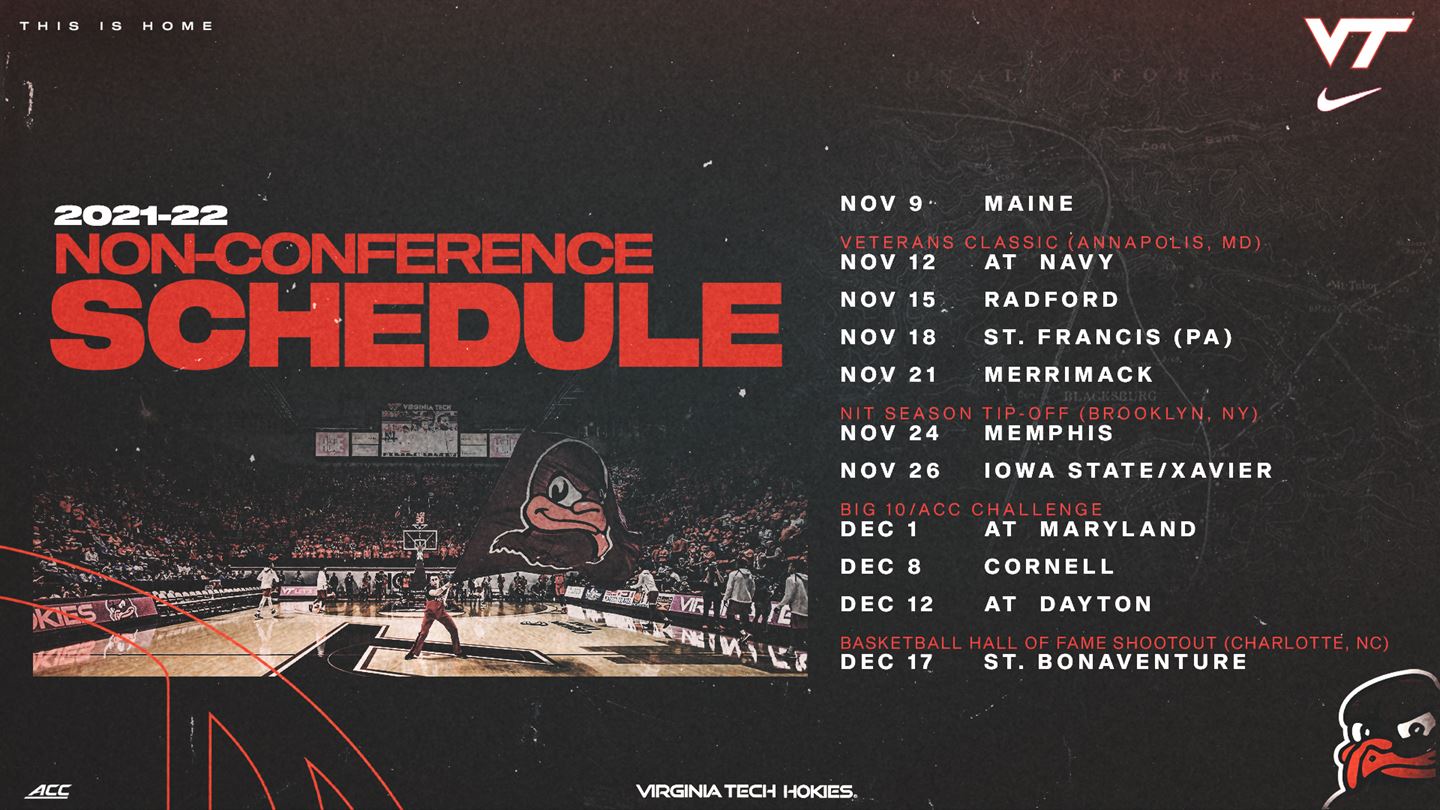 The 11-game slate features five top-100 teams from the 2020-21 season, per KenPom.com, and three road tests. The Hokies open the season on Tuesday, Nov. 9 vs. Maine in Cassell Coliseum.

While Tech faces smaller opponents in the Black Bears, Radford, St. Francis (Pa.) and Merrimack, the schedule as a whole is arguably the Hokies’ strongest non-conference slate since joining the ACC in 2004.

Games at Navy, vs. Memphis and Iowa State/Xavier in Brooklyn, at Maryland, vs. Cornell, at Dayton and vs. St. Bonaventure in Charlotte will all provide immense challenges for Virginia Tech. Not including Cornell, who didn’t play in 2020-21 due to the Ivy League not having a season, those seven programs had an average KenPom rating of 84 and averaged 14 wins in a season where many schools played 20-25 games.

In fact, six of the seven schools from that list finished above .500 last season. The exception is Iowa State, who went 2-22 and made a coaching change, hiring T.J. Otzelberger in March.

Two teams – St. Bonaventure (9 seed) and Maryland (10 seed) – made NCAA Tournament appearances in March. The Bonnies finished 16-5 and won the Atlantic 10 Tournament, while the Terrapins finished 17-14 after a Second Round exit in the Big Dance to No. 2 seed Alabama. Memphis and former Hokie wing Landers Nolley won the NIT, too.

Simply put: Virginia Tech’s non-conference schedule is going to be a grind.

Above is a graphic with details on every non-conference opponent’s head coach, conference, 2020-21 record and all-time record vs. Virginia Tech. Here, I’ll provide a few other tidbits on each opponent.

Maine: The Hokies and Black Bears have only met once, back in 2016. Virginia Tech won by 13, 80-67. Zach LeDay led the Hokies with a double-double, 20 points and 12 rebounds. Maine finished last in the America East Conference in the nine games it played in 2020-21. Richard Barron enters his fourth season as the head coach and is 16-56.

Navy: The last time Virginia Tech played Navy in Annapolis was 1959. The Hokies won 89-78 in what was the first of three straight victories against the Midshipmen. Ed DeChellis enters his 11th season in charge at the Naval Academy after finishing 15-3 in 2020-21. Mike Young and DeChellis have met twice, back in 2002-03 when Young was at Wofford and DeChellis at East Tennessee State. In his final season with the Buccaneers, DeChellis beat Young twice before taking ETSU to the NCAA Tournament. Ironically, that was Young’s first year with the Terriers. Winning in Annapolis won’t be a walk in the park.

Radford: The 12th meeting of the Battle for the New River Valley features a new face: Highlanders head coach Darris Nichols. A Radford, Va. native like Young, Nichols played his college ball in Morgantown for West Virginia. His older brother, Shane, played for and coached under Young at Wofford, and Nichols followed that path, joining Young’s staff for the 2013-14 season. The Young-Nichols connection dates back to when Nichols was a kid. Now in a new role after spending six seasons as an assistant at Florida, Nichols will coach against Young in Cassell Coliseum on Nov. 15.

St. Francis (Pa.): The Hokies and the Red Flash have met twice previously, with the last meeting in 2018. Virginia Tech won 75-37. Despite finishing 6-16 in 2020-21, St. Francis upset Jeff Capel and Pitt last November on the road, an 80-70 win at the Petersen Events Center. Tech lost there by 11 in February. The Red Flash are led by Rob Krimmel, who had six consecutive seasons finishing .500 or better up until last season.

Merrimack: The Warriors are located in North Andover, Mass., the hometown of Hokies’ guard Wabissa Bede (who has yet to make an announcement on whether or not he’ll return in 2021-22). In its first season as a Division I program back in 2019-20, Merrimack finished 20-11 (14-4 NEC) but did not advance to the postseason. It surprised people that season, knocking off Northwestern in Evanston by ten and Army at home by nine. Head coach Joe Gallo is in his sixth season at the helm of the Warriors and, like Young at Wofford, saw his program make the jump from Division II to Division I during his tenure. Wofford became a D-I school in 1997 in Young’s ninth season as an assistant with the Terriers.

Memphis: The first big-time test for the Hokies, the Tigers won 11 of their last 13 games last year. Former Metro Conference foes from 1979 to 1991, it’ll be the first meeting between Virginia Tech and Memphis since March 2005, a game the Tigers won 83-62 at home in the NIT. It’s only the second meeting at a neutral site. The previous matchup was in the Metro Conference Tournament in Louisville in March of 1981, a 72-66 VT win. More on Memphis can be found in the NIT Season Tip-Off story from July.

Xavier: Unfortunately, there are some painful memories here. The last time the Hokies and Musketeers met was in Puerto Rico in 2008. Tech scored with a few seconds to play in overtime, but Xavier hit a half-court buzzer beater to win 63-62. A-10 adversaries from 1995 to 2000, the Hokies have lost eight of the last nine against the Musketeers and have won just four of the 13 meetings. Xavier lost six of its last eight games to end last season and finished 13-8 in the Big East. Travis Steele is in his fourth year in Cincinnati and is seeking his first 20-win season. He hit 19 wins in 2018-19 and 2019-20.

Maryland: Long live the double overtime loss in February 2010 to the Terps and Greivis Vasquez. Man, was it fun to watch him and Malcolm Delaney duke it out. Vasquez dropped 41 in that game, and Delaney 27. Historically, this series is lopsided. Maryland has won 32 of the 42 all-time meetings, though Tech won six of the 15 when the two programs were ACC rivals. The Terps were a No. 10 seed in the NCAA Tournament last year and knocked off UConn in the Round of 64. Mark Turgeon has been at the helm since 2011-2012 and holds a 5-0 record against the Hokies. He’s also taken Maryland to the Big Dance all but once since joining the Big Ten in 2014 (not counting COVID). The Xfinity Center in College Park, which holds 17,950, will be rocking on Dec. 1 and provides the truest of road tests before Virginia Tech kicks off its ACC campaign in year three under Mike Young.

Cornell: A 7-20 team in 2019-20, Brian Earl has yet to have a plus-.500 team in five seasons at Cornell. The Big Red will be the fifth Ivy League school the Hokies have faced, joining Brown (VT holds 2-0 record), Columbia (1-0), Princeton (1-0) and Yale (0-1). The most recent game against an Ivy League program was in March of 2016 against Princeton in the NIT. Tech knocked off the Tigers in overtime, 86-81. Cornell provide a nice break for the Hokies in early December before larger games at Dayton and vs. St. Bonaventure.

Dayton: The Flyers and Hokies last met in 2019 in the Maui Invitational when Obi Toppin hit ten of his 14 attempts from the floor and finished with 24 and eight. Led by Anthony Grant, who’s been the head coach at Dayton since 2017, the Flyers are 78-41 with two NIT appearances. Dayton would’ve been a high seed in 2020 after finishing with a 29-2 record, though the NCAA Tournament was canceled due to COVID. The Flyers finished 14-10 in 2021 after losing to Memphis in the NIT. The University of Dayton Arena holds 13,455, which will be an intimidating venue for the Hokies in December. Like Maryland, Dayton will be a difficult challenge for the Hokies on the road.

St. Bonaventure: Former A-10 foes with the Hokies, Tech last faced St. Bonaventure in 2011 in Blacksburg, a 73-64 win. The Bonnies ventured to their third NCAA Tournament under Mark Schmidt in March after winning the A-10 Tournament. St. Bonaventure has finished above .500 in nine of the last ten seasons and made three trips to the Big Dance. A 16-5 team in 2020, four of the five losses came at the hands of top-100 teams in KenPom. Four of five players who started for St. Bonaventure in its NCAA Tournament loss to LSU return, too, including point guard Kyle Lofton, who played 96% of the Bonnies’ total minutes last season, the most in the country. After Maryland, St. Bonaventure might be the most difficult opponent on Tech’s non-conference schedule in 2021-22. Don’t overlook the Bonnies.

While Virginia Tech’s ACC slate hasn’t been released yet, the scheduling rotation is set. Here’s a breakdown of the Hokies’ conference opponents. The full schedule should be announced sometime in late September/early October.

Chris Coleman detailed his thoughts on Radford entering the transfer portal back on July 1, which still ring true. The redshirt sophomore averaged 12.2 points, 5.9 rebounds and 2.7 assists per game in 2020-21 while shooting 55%, second-best on the team. He also led the Hokies in minutes per game with 32.2 and scored in double figures in his last seven games, including 18 points against Florida in the NCAA Tournament.

Despite being 6-2, Radford ranked 35th in D-I, fifth in the ACC, in offensive rating, per KenPom. Only two players ahead of him were shorter than him, which shows how valuable he was offensively for the Hokies.

In February, Radford was found guilty of driving under the influence. One charge from a positive reading on his vehicle’s interlock ignition device in May and another from July were dismissed in court on Monday, Aug. 16. Radford was suspended indefinitely after the incident in February and missed one month before returning.

With Radford’s departure, Virginia Tech now has two open scholarship spots ahead of the 2021-22 season. While Young and his staff likely have eyes on intriguing prospects, Tech’s academic semester begins in just a few days on Monday, Aug. 23. Even though the scholarship openings exist, it doesn’t seem like there is enough time for the Hokies to bring in any new players.