At times in the Beamer era, Virginia Tech lacked depth on the offensive line. In recent history under Vance Vice, the group has been one of the positions with the most depth.

The Hokies lost Christian Darrisaw to the Minnesota Vikings, Bryan Hudson to Louisville and Doug Nester to West Virginia in the offseason. Yet despite those departures, there are seven or eight players that seem to be game ready, as Vice alluded to with the media on Wednesday.

Here’s a look at Virginia Tech’s offensive line and what the groups looked like during open practice in early August: 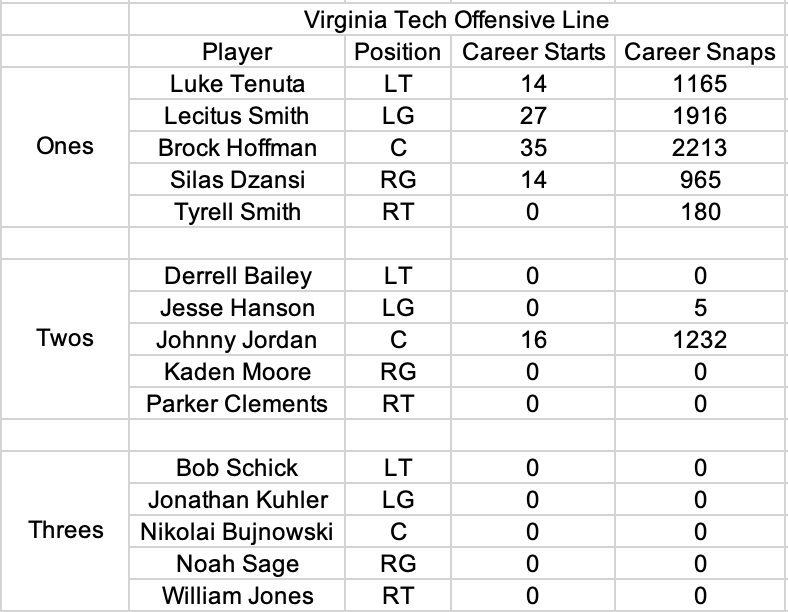 (Note: Kuhler, Bujnowski, Sage and Jones are all walk-ons and are listed for purposes of showing the three tiers.)

“If everybody can play multiple spots, I can be three-deep with seven dudes.”

That quote summarizes Vice’s comments on Tech’s offensive line depth from Wednesday. The Hokies have a variety of ages and experience levels, from Tyrell Smith, who was apart of Frank Beamer’s 2014 recruiting class, to a group of talented freshmen in Parker Clements and Kaden Moore.

Four players have over 1,000 career snaps: Brock Hoffman, Lecitus Smith, Johnny Jordan and Luke Tenuta. Throw in Silas Dzansi and those five are the only members of the room that have started a Division I game.

So where does this excitement of depth and the ability to have seven or eight guys capable of playing come from?

Virginia Tech has six offensive linemen with vast experience, all with anywhere from three to seven years of Division I football under their belt.

Tyrell Smith (6-3, 300, Gr., North Brunswick, N.J.): There’s no one older than Smith on this Virginia Tech football team. Heck, Vice joked Wednesday that Smith has been in Blacksburg longer than Vice has. He’s the elder statesman of the program, which is why the coaching staff is giving him an opportunity to compete for the starting right tackle position. Whether he wins the job remains to be seen, but he has experience. Though he’s never started a game, he’s notched 180 snaps over the span of five seasons.

Johnny Jordan (6-1, 303, Sr., Leesburg, Va.): The Maryland transfer started 16 games and played over 1,200 snaps in College Park. Vice said Jordan is “like a ten-year vet.” Both Justin Fuente and Dzansi said it’s like Jordan’s been around the program for four or five years. A natural center who earned All-Big Ten Honorable Mention honors last season with the Terps, Jordan can play guard if the Hokies need. More Jordan’s story, from Cory Van Dyke: Link.

Lecitus Smith (6-3, 315, r-Jr., Fitzgerald, Ga.): While Tyrell Smith is the elder in the room, Lecitus Smith has the most experience in Blacksburg. He has the second-most starts and second-most snaps in the group, only to Brock Hoffman, though all of Smith’s came for Virginia Tech in the ACC. He started four games in 2018, 12 in 2019 and 11 in 2020. He’s the go-to option at left guard, though he played every position but left tackle in 2018. He can move around if the Hokies need.

Brock Hoffman (6-3, 310, r-Jr., Statesville, N.C.): The former Coastal Carolina standout led the Hokie offense in snaps played in 2020 with 725, all coming at center. Thanks to his days with the Chanticleers, Hoffman has the most starts and snaps in the offensive line room. Vice continued to rave about Hoffman on Wednesday.

“He’s had a tremendous camp and spring at that middle spot. He’s playing at a super high level right now. Johnny [Jordan] is the same way. Johnny came in here and everyone said, ‘what are you going to do, you have two centers?’ Well, Brock can play all five [positions]. This week we’ll shuffle around and see which group is in there when we move the ball the furthest.”

Vice also called Hoffman the “real quarterback of the offense” because he makes all of the calls and identifies all of the fronts. While his best fit is center, he’s flexible enough to slide wherever Tech needs him, like Vice mentioned.

Silas Dzansi (6-5, 325, r-Jr., Woodbridge, Va.): Dzansi is second to Lecitus Smith in terms of experience in a Virginia Tech uniform. Smith has 13 more starts and almost 1,000 more snaps, but they’ve both been in Blacksburg since 2017. Dzansi has played left tackle, right guard and right tackle in his time at VT. He spent most of 2020 at right guard, but could play elsewhere if needed.

Luke Tenuta (6-9, 322, r-So., Crozet, Va.): The youngest of the experienced bunch, Tenuta has two seasons (14 starts, over 1,100 snaps) under his belt. He only played right tackle in 2019, but played on both the left and right last year. He’s made the transition to left tackle this offseason.

“He had lined up over there a little bit in the past and wanted to make the move,” Vice said about Tenuta’s move to left tackle. “He’s done a tremendous job. He studies constantly, whether it’s other college tackles or professional tackles. He’s really a student of the game. It’s fun to have him in the room, and I’ll mess around with him every once in a while and line him up at guard just to make sure he knows what they do and he can. He’s had an unbelievable camp so far.”

Tenuta has a mighty important job in protecting Braxton Burmeister’s blind side. Should something happen to him, Tech might have a tough time filling his role. The only Hokie offensive lineman that had a better PFF blocking grade than Tenuta last season was Darrisaw, who is in the NFL now.

Six players were tallied as “experienced” guys. Who are one or two others who might find their way into the rotation this season?

Parker Clements (6-7, 292, Fr., Lugoff, S.C.): Still technically a true freshman despite arriving on campus at the beginning of last season thanks to COVID-19, Clements has impressed at right tackle. Vice said he’s jumped from 260 to 302 on the scale and is “competitive as crap.”

“He’s highly competitive, very athletic,” Vice said. “He takes stuff seriously, which I like. He’s definitely someone that belongs in this room, and I don’t think I can be any more excited about what he brings us and his future and the success he’s getting lined up for.”

Clements has competed with Tyrell Smith for the right tackle spot this fall. He doesn’t have any in-game experience, so it wouldn’t be a shocker if he is limited on Sept. 3 and slowly gets more minutes as the season rolls along.

Kaden Moore (6-3, 311, Fr., Bethlehem, Pa.): A true freshman who arrived this summer, Vice said Moore’s had a great fall camp so far and is making a big push to be one of the starting five. He was slotted at right guard with the twos in the open practice the media observed.

(Editor’s note: We believe that Schick is listed incorrectly on HokieSports.com, which lists him as a true sophomore.  If last year didn’t count towards his eligibility, then he should still be a true freshman in 2021.  We will continue to list him as a true freshman unless corrected by Virginia Tech.)

Jesse Hanson (6-5, 307, r-Fr, Blue Ridge, Va.): Hanson redshirted in 2019 as a freshman and played in two games last season. Vice said he’s improved through the spring and summer and is “excited about what he brings to the table.” He’ll compete at left guard behind Lecitus Smith.

Derrell Bailey Jr. (6-6, 296, Fr., Greenback, Tenn.): Vice said Bailey has really improved after moving over from the defensive line. He was at left tackle during the open practice in early August and will likely compete with Schick to backup Tenuta at LT.

Vice has a solid core to build his group around. The experienced six have over 100 combined starts and almost 8,000 career snaps. It’s an older group, however, and backup options are always helpful in case of injury. Clements, Moore and Schick seem like the most likely options to compete and build that seven or eight-man rotation Vice hopes to have.