The #21/#22 Virginia Tech softball team travels to Los Angeles this weekend to take on the #2 ranked UCLA Bruins in an NCAA Super Regional. The best two out of three series begins on Thursday, and continues with games on Friday and (if necessary) on Saturday.

The Hokies (36-13) earned the opportunity to advance to the Super Regionals by sweeping the Arizona State regional this past weekend with two wins over BYU and a single win over host Arizona State by a combined score of 24-7. UCLA (44-4) qualified by winning their own regional, defeating Long Beach State 8-0, Fresno State 5-4 (8 innings), and Minnesota 2-1.

The Bruins, who have won 13 National Titles in Softball, are playing in the Super Regionals for the seventh consecutive season. UCLA is the defending National Champion, having defeated Oklahoma for the title in 2019, going 56-6 on the season. In the Covid shortened 2020 season, the Bruins were 25-1 and ranked #1 before Covid cancelled the rest of the season.

Any discussion of the Bruins usually starts with Senior Pitcher/First Baseman Rachel Garcia, who many believe is the best softball player in the country. Garcia won the USA Softball Player of the Year Award in 2018 and 2019 and is one of three finalists for the award this year. The award was not given in 2020.

Garcia leads the country in Earned Run Average with a 0.78 mark and has a 16-0 record this season, along with two saves and 142 strikeouts in 107.1 innings. If that’s not impressive enough, Garcia usually plays first when not pitching and has blasted 12 home runs for the Bruin offense, while posting a .373 batting average and a team-leading .775 slugging percentage.​ She will play for Team USA in the Tokyo Olympics. 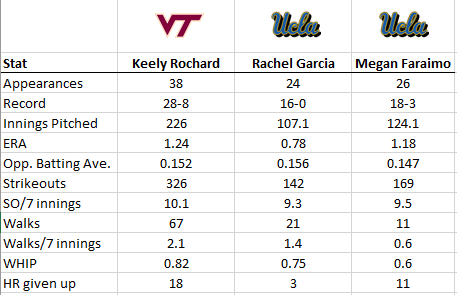 Virginia Tech Coach Pete D’Amour respects both Bruin hurlers but also has confidence in his offense. “Garcia is good,” he says. “She’s on the national team. But I don’t put her on a pedestal. Our team faced Assistant Coach Mike Lewis today, who throws as hard as she does. It’s not like we’re going in blind. We know what to expect. We’ve faced good pitchers this year and those two UCLA pitchers are good. We’re just going to compete and see what happens.”

Here’s a look at the overall statistical comparison of the two teams:

UCLA could also be bolstered by the return of redshirt senior Bubba Nickles (.353 average), who has not played since March 21st because of an injury. Nickles was a first team All-American in 2019 when she led UCLA in home runs (18), RBIs (72), and slugging percentage (.714). Along with Garcia, she was named to the USA Olympic Team and is scheduled to join them after the season. She posted a picture Tuesday on her Instagram account of her jumping in the air clicking her heels with the caption “More mid-game heel clicks coming your way this Thursday!!!”

UCLA is coached by Kelly Inouye-Perez, who is in her 33rd year at UCLA and her 15th season as the Bruins’ head coach. She has an overall record of 669-177-1, a winning percentage of .790. Inouye-Perez is assisted by Lisa Fernandez, a three-time Olympic Gold Medalist and four-time First Team All American, who has coached at UCLA for 23 years.

D’Amour has consistently said all season that “anytime Keely’s on the mound, we have a chance to win.” Rochard knows she’ll have her work cut out for her facing that potent Bruin attack, but she looks forward to the challenge. When asked her thoughts about facing the Bruins, Rochard simply replied, “I look forward to all my games,” but admitted that “It’s big. It’s what we’ve been working for, but we still have a lot of work to do.”

Shortstop Kelsey Bennett described playing behind Rochard as “the experience of a lifetime,” adding with a laugh that “it sometimes gets boring out there – if you even get anything hit to you, it’s probably going to be a pop up. Playing behind her for two and a half years has just been amazing.”

Hokie faithful are hoping that the Virginia Tech bats, which were red hot in Tempe, make the trip to L.A. Bennett, who hit a scorching .818 (9 for 11 with 2 HRs) in Arizona, says there’s no real secret to the explosion. “Swing at pitches that you can hit hard,” said Bennett. “Be selective. If you take a pitch that you can’t hit very well and it’s a strike, that’s okay – you get three strikes … Take it one pitch at a time, one swing at a time, one play at a time.”

The Hokies also realize that to beat UCLA in their house will be a challenge, but one they’re looking forward to. “We can take confidence from the past weekend,” said Bennett, “but know that this past weekend is over and you can’t keep dwelling on it.”

“It’s big,” adds Rochard. “It’s what we’ve been working for, but we still have a lot to do. We’re starting to hit on all cylinders.”

The softball world thinks the Hokies are underdogs, but D’Amour likes his bunch.

“I think when you get to this level (Top 16 teams in the country),” said D’Amour, “there’s not much difference between any of us. I don’t think there’s a big gap. People like to talk about us winning two out of three from FSU on a neutral site and they (UCLA) are not so much better than FSU. They’re a good team and you have to play well to compete with them, but we’re playing well. I like our chances as much as anybody.”

“We’ve had good practices the past two days,” he continued. “I think we’re in a good spot. I told the team that I’ve been part of a team that went into L.A. and won a super regional (Missouri, 2009), so they’re (UCLA) human. We’re just going to go in there and play.” 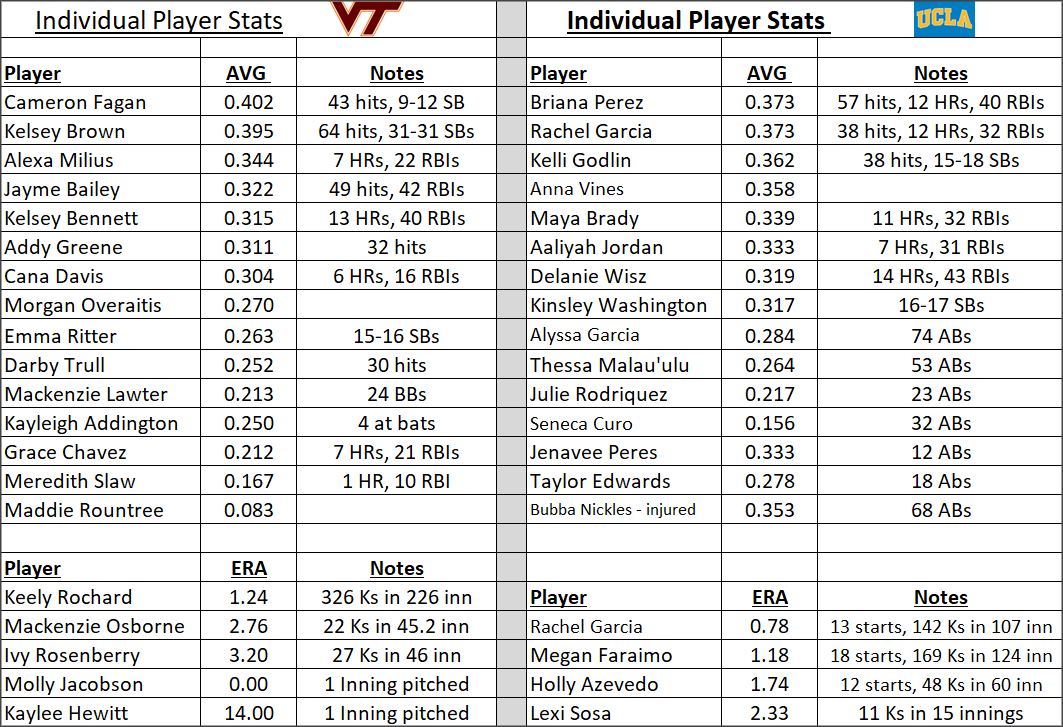