The 20th ranked Virginia Tech Hokies (33-12) received their 10th all time bid to the NCAA Softball Championships Sunday. The Hokies will open play on Thursday night in Tempe, Arizona against BYU (36-15). Also in the bracket is host and overall 15-seed Arizona State (32-14) and Southern Illinois (37-14). 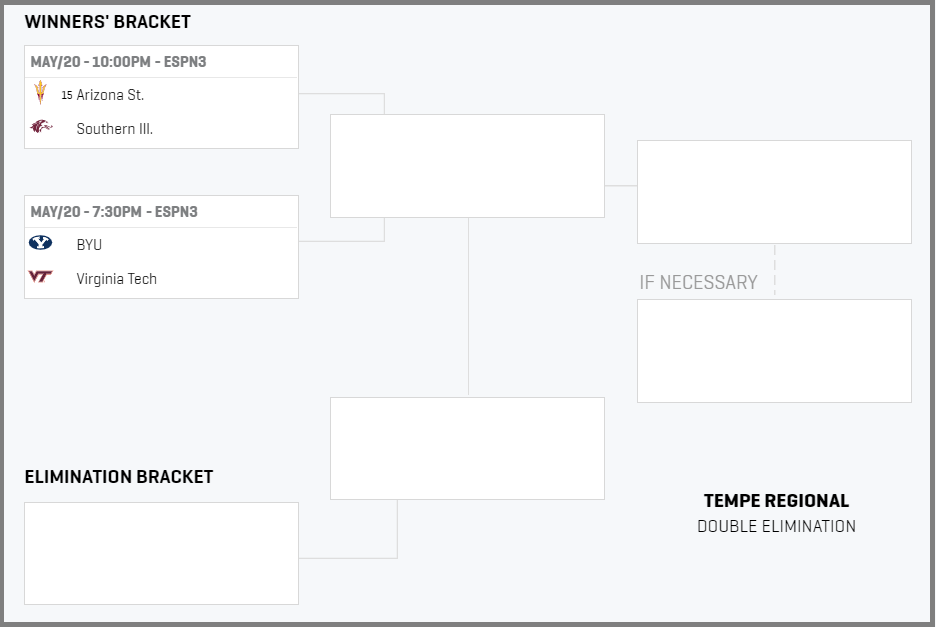 “I’m looking forward to the NCAA tournament,” said Coach D’Amour after the Hokies were eliminated from the ACC Tournament on Friday. “This last weekend (in Louisville) almost felt like Regionals. I thought our kids performed better this weekend than they did in Lexington (NCAA Regional in 2019) – It’s the same kind of environment. I always preach that if we have Keely on the mound, we have a chance to win against anybody. I like the state of where our program is. I’m proud of our kids. We’ll put the work in and be ready next weekend.”

The bid came after a 1-1 showing in the ACC tournament in Louisville, a tournament that was dominated by pitchers. In the nine games played in the tournament, the average score was 3-1 and over half the games (five) were shutouts.

The Hokies opened play in the tournament Thursday with a 4-1 win over the Notre Dame Fighting Irish. The win snapped a six-game winning streak by Notre Dame over the Hokies and was only the second VT win over the Irish in their last 20 matchups.

The Hokies jumped on Notre Dame starter Senior Alexis Holloway early, scoring three runs in the first two innings and chasing her from the game. Cameron Fagan, Alexis Milius, and Darby Trull had early RBIs and Emma Ritter added an RBI triple in the 4th inning.

ACC Pitcher of the Year Keely Rochard made the runs stand up, surrendering only four hits on the day and striking out seven.

On Friday, the Hokies couldn’t get the bats going, as they dropped a 2-0 decision to regular season champion Clemson. The Hokies started hot, getting two base runners in scoring position in the first inning, but failed to score and were only able to get single baserunners on the remainder of the game.

In spite of the disappointing loss, Coach D’Amour liked what he saw from his team – especially his newcomers. “If you see kids in a big time, pressure situation and their eyes get big – I call it ‘saucer eyes.’ And we saw it a lot in Kentucky two years ago, but I didn’t see it from our returners this weekend. I saw it a little bit by kids that hadn’t seen this type of environment before, but I didn’t see it by the end of the game today. That’s a good sign for next weekend.”

The players seem to share their coach’s optimism. “The past few times when we’ve lost, we’ve bounced back even better,” said sophomore Jayme Bailey. “We’re going to take this, learn from what we did and keep moving on…We’re just putting the past behind us and moving on to the next opponent. Sunday, we’ll see who we’re getting and go from there.”

Keely Rochard, who made the ACC All-tournament team, echoed similar thoughts after the Notre Dame game. “We still have a lot more that we can get better at,” said Rochard. “But the good thing is that we haven’t really peaked…we’re on our way there.”

We’ll have a Regional preview later this week.