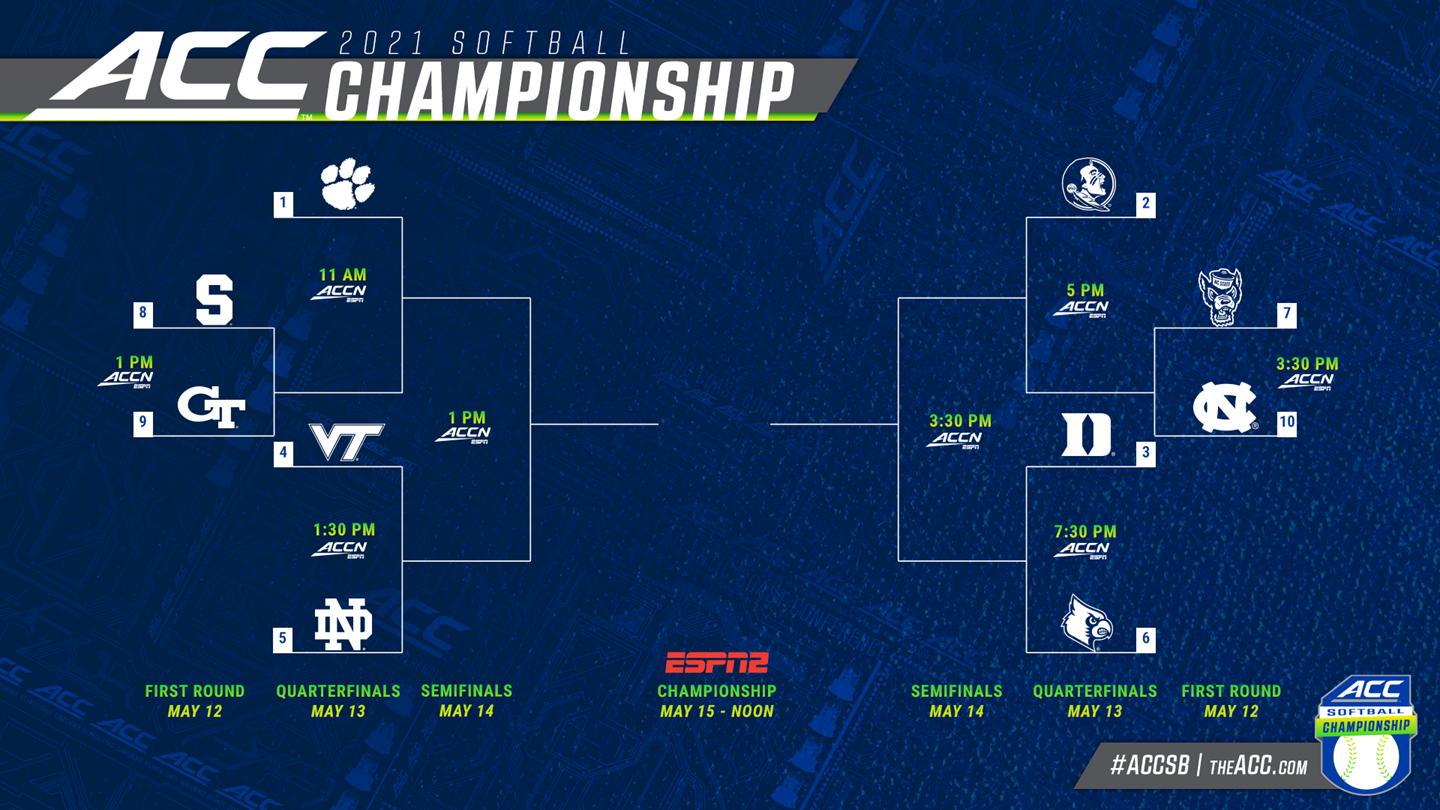 Number 20 Virginia Tech Softball will open ACC Tournament Play on Thursday in Louisville against their recent nemesis, the Notre Dame Fighting Irish. The game is scheduled for 1:30 pm and will be televised by the ACC Network.

In the teams’ most recent meeting on April 23-25 in Blacksburg, the Irish swept the Hokies by scores of 2-1, 6-5, 4-3 (nine innings), and 3-1. The results continued a recent trend of Hokies frustration against the Irish as Notre Dame has now won 18 of the last 19 contests played between the two schools.

It was a convergence of bad mojo for the Hokies that weekend. A Virginia Tech team that came into the series leading the ACC in hitting with an average of .312, could only manage a .211 mark (24 for 114) against Notre Dame.

But the bigger issue was that the Hokies uncharacteristically struggled on defense, committing seven errors in the series that led to seven unearned Irish runs – runs that occurred at the most inopportune times.

Hokies Coach Pete D’Amour is certain his team remembers that fateful weekend. “After that weekend,” said D’Amour, “there isn’t too much we need to say to motivate this bunch. They seem focused and know what we need to do to put us in the best position to succeed.”

Since that weekend, however, the Hokies seem to have righted the ship, sweeping Syracuse by a combined score of 30-2. Kelsey Bennett batted .429 against the Cuse with a home run and a double, driving in seven runs, then followed it up with a 4-for-4 performance in VT’s intersquad scrimmage on Saturday with two more bombs, a double, and six RBIs.

Since returning from injury, Freshman Cameron Fagan has batted .424 (14 for 33) and she and Kelsey Brown (.403 season average) form a dynamic duo at the top of the Hokies’ batting order. Brown is also a perfect 29 for 29 in stolen bases.

But the Hokies success is tied to ACC Pitcher of the Year Keely Rochard (1.12 ERA), who leads the ACC in strikeouts (288), ERA (1.12), innings pitched (194), complete games (25), shutouts (13) and opponents’ batting average (.144). Last weekend, she limited Syracuse to seven hits and one run in 22 innings. Although Freshmen Mackenzie Osborne pitched nine solid innings against Notre Dame in Blacksburg, there is little doubt as to who will get the ball in Louisville.

The Notre Dame batting lineup is imposing. The Irish lead the ACC in batting average with a .308 mark, and their lineup contains two of the top hitters in the conference – Leadoff batter Abby Sweey (.466 average) and their #2 hitter Emma Clark (.410). The two of them have combined for 41 stolen bases in 49 attempts.

In the circle, the Irish are led statistically by Junior Peyton Tidd (2.18 ERA and 77 Ks in 122 innings). However, it is Senior Alexis Holloway (2.51 ERA, 104 Ks in 114 innings), who has dominated the Hokies since her first start against them in 2018. Holloway, an Aerospace Engineering major, has regularly grounded the VT hitters, giving up only four earned runs in the 31.2 innings (1.15 ERA) that she has pitched against VT while striking out 22.

Coach D’Amour likes how his squad has performed this past week – not only on the field, but also in the classroom. “This was a stressful finals week for our players,” said D’Amour, “and we seemed to make it through finals week unscathed. Finals week somewhat parallels the softball season. I told the team that I saw their grades leading up to finals and they were really impressive. The players needed to trust that the preparation they put in all semester would equate to better performance at the end of the year and if they didn’t put in the work on the front end of the semester they couldn’t expect to flip the switch and do well in finals. Softball works the same exact way.

“Although it was finals week, it was important for us to practice and continue to improve. I like where our team is mentally and physically. The ladies took advantage of the time off and we’re swinging the bats the last three or four days as well as we have all season.

“The pitchers should be well rested, and we’ve been able to address some nagging injuries/fatigue normally seen this time of year.”

Not only do the Hokies have payback as a motivator, but their chances of serving as one of the 16 host locations for the NCAA regionals probably hinges on making a run in the ACC Tournament. The most recent RPI has the Hokies ranked #21 but some wins this week could give them a much-needed boost in consideration.

After Saturday’s scrimmage, D’Amour said “I think we’re in a good spot right now. If we play in postseason like we have the last two practices, we’ll be in every game we play the remainder of the year. That’s all we can ask for at this point in the season.” 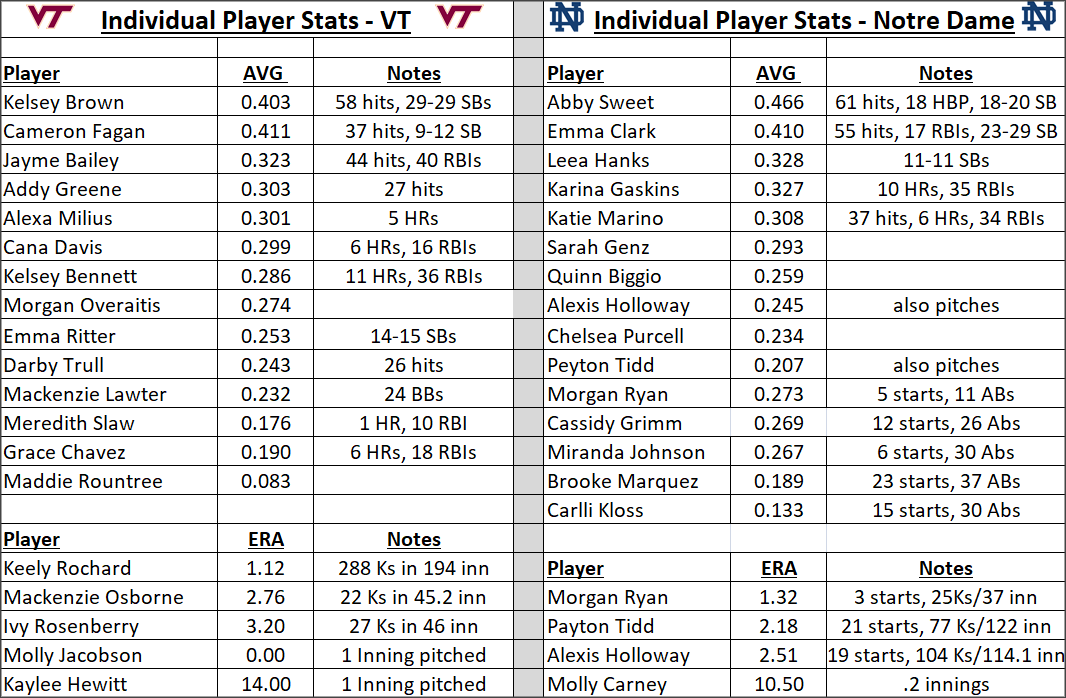