Reeling from a five-game losing streak, the #20/#19 Virginia Tech Softball team heads to Syracuse this weekend for their final ACC series of the year.

Like the entire Syracuse home season (seven games), no fans will be permitted to attend.

Syracuse won their last ACC series, taking three out of four games in Charlottesville from UVA. On Tuesday, the Orange notched a 10-6 win at Albany, so they have a little momentum coming into this series.

On the flip side, the Hokies followed up a weekend sweep at the hands of Notre Dame with a 5-3, nine-inning loss to Liberty on Wednesday, a game Tech led 3-0 going into the 7th.

Here’s the Tale of the Tape.

The Orange have had some recent success against the Hokies, having won five of the last six games played between the two schools – a three-game sweep in Syracuse in 2017 and two out of thee in Blacksburg in 2018. Graduate Student Alexa Romero has pitched very effectively in every one of those six games – yes, every one — throwing a total of 21.1 innings and limiting the Hokies to five hits and two earned runs over that period. She actually no-hit the Hokies on 3/9/18, but Darby Trull was the only current Hokie in the lineup that day.

In their first game of the season in February, the Orange beat Notre Dame and Hokie nemesis Alexis Holloway 3-2. They currently stand at 11-13 in conference play, sweeping a series from Pittsburgh, splitting the series with BC, and being swept by FSU and Duke.

In the circle, the Orange are led by Romero (2.58 ERA, 105 Ks in 94.1 innings), who threw a complete game, one-hit shutout of UVA in her last start. This is Romero’s fifth season and she has been a recent mainstay of the Syracuse program with over 90 career starts and 700 career strikeouts.

Syracuse has struggled at the plate this season.  They are currently last in the ACC in batting average (.229) and 12th in runs scored (133). Their only player hitting above .300 is Senior shortstop Neli Casares-Maher, who is hitting .352 and leading the team in RBIs with 19.

For the Hokies, this series is a chance to get things back on the right track.  It is the last ACC series of the season and the Hokies need some things ironed out before heading to Louisville in two weeks for the conference tournament.

“I saw some steps in the right direction offensively last night,” he said. “We hit 7-8 balls hard, right at defenders. Our pitching and defense were good enough to win, but we have to continue putting good at bats together this weekend.” 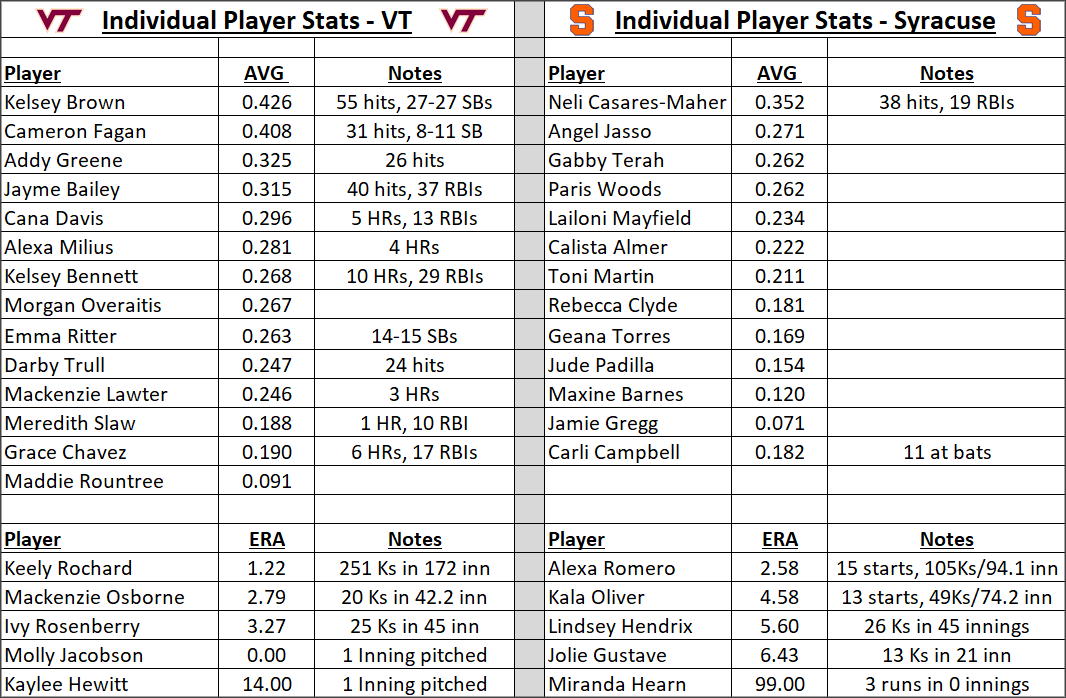