The #15/#14 ranked Virginia Tech softball team (28-7 overall, 19-7 ACC) won their 7th consecutive ACC series this weekend, taking three out of four games against the Georgia Tech Yellow Jackets.  After dropping the series opener Friday by a 6-4 score, the Hokies rebounded to win the next three games 4-3, 10-4, and 12-0 (five innings).

While he wasn’t necessarily happy with his team’s Friday night performance, Hokies’ Coach Pete D’Amour saw some positives this weekend.  “I’m a broken record with this,” said D’Amour, “but our mantra in our program is ‘are we better now than when we started?’ That concept applies throughout the year but also applies to our weekends. We were better today (Sunday) than when we played Friday.”

Speaking of Friday, that was probably one of the more disappointing performances of the year for this team. Virginia Tech struggled at the plate with Yellow Jacket starter Blake Neleman, who came into the game with an ERA of 5.00.  The Hokies stranded 7 runners, including a bases loaded/one out situation in the 7th inning.  Star Hokies pitcher Keely Rochard struck out 12, but a defensive lapse on a bunt led to three unearned Yellow Jacket runs that proved to be costly.

On Saturday, the Hokies swept the doubleheader from Georgia Tech with freshmen pitchers Ivy Rosenberry and Mackenzie Osborne each winning their respective games.  Rosenberry gave up just one hit through the first six innings before running into a bit of a jam in the 7th and giving up three runs. But she persevered and got the last two outs via strikeouts to seal the win.

Osborne threw five solid innings in only her 4th start of the year, and the Hokies gave her plenty of run support with 12 hits and 10 runs.

D’Amour was very pleased with his rookie hurlers.  “Ivy and Ozzy more than held their own against arguably the best offense we’ve seen all year,” D’Amour said. “We need to build on that in the coming weeks. We’re at the point in the season where I like to think the freshmen aren’t ‘freshmen’ anymore. The ‘well they’re just freshmen’ saying goes out the window when you’re this far into a season. We have a handful of first year players that contribute to the success of this team, and they’re adjusting really well.”

On Sunday, the Hokies played one of their best games of the season in swatting the Jackets 12-0 in a run-rule contest. Rochard threw the fifth no hitter of her career and the Hokies’ bats exploded for five home runs.  Although she only struck out three batters, Rochard was in control throughout the game.

“I went out there today and just thought about spinning the ball,” Rochard told Hokiesports. “Just like little mechanics that I could work on and keeping that in mind. It all just worked out and I trusted my defense, because I was mixing my pitches a lot today.”

Here are the highlights from the Sunday game.

Offensively, the Hokies had a lot of stars in the series:

As a team, the Hokies hit .347 for the series and blasted nine home runs.

“I was satisfied with the adjustments our hitters made this weekend,” said D’Amour. “We have the ability to score a bunch of runs and I’ve said that all year. We’re a potent offense when we take the approach we took today.”

The Hokies had some of the biggest crowds of the year this weekend and D’Amour took notice.

“I’d like to thank all of the fans that came out and supported us this weekend,” he said. “The weather was great and we realize we’re competing with other entertainment options. We’re very appreciative of our fan base and hope to see everyone again next weekend.”

Next up for the Hokies is a four-game series with the Notre Dame Fighting Irish next Friday through Sunday.

Here are the current ACC Standings after this weekend’s action: 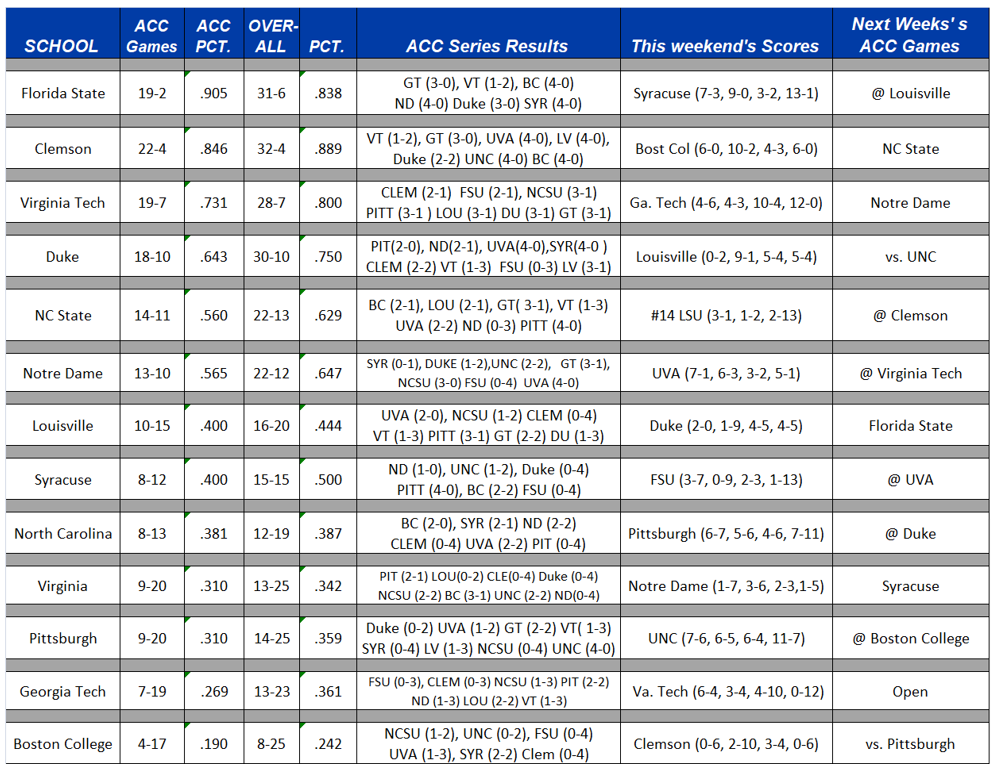