The #15/#14 ranked Virginia Tech Softball team welcomes the Georgia Tech Yellow Jackets to Blacksburg this weekend for a four-game series. The Hokies will be going for their 7th consecutive ACC series win. Friday’s game will begin at 6:00pm, followed by a Saturday doubleheader at 1:00pm and 3:00pm, and conclude with a Sunday game at noon. All games are scheduled to be shown on ACCNX. Per HokieSports.com, approximately 150 fans will be admitted on a first come-first serve basis.

The Yellow Jackets arrive in Blacksburg with an overall record of 12-20 (6-16 in the ACC). If the ACC Tournament started tomorrow, the Yellow Jackets would be on the outside looking in, as only the top 10 schools participate. That 10th spot might come down to Georgia Tech’s series with UVA in two weeks.

Hokies Coach Pete D’Amour is quick to warn fans not to underestimate the Yellow Jackets. “Of all the teams we’ve played this year,” D’Amour says, “Georgia Tech’s record is the most deceiving. They have the ability to score double digits every game – their offense can be dangerous.”

A quick glance at the Georgia Tech results points out D’Amour’s reasoning. After being swept in Pod Play by both Clemson and Florida State, the Jackets have managed to win at least one game in each ACC series, almost always by putting up big numbers. The Jackets won single games against NC State (12-10) and Notre Dame (8-7), and got series splits versus Pittsburgh (11-4, 11-10) and Louisville (12-2, 4-2).

Offensively, Georgia Tech is tied for 4th in the ACC in team batting average (.291) and is second in the conference in home runs (43). The top five hitters in their batting order not only hit over .300 but also have power:

The Jackets do not run a lot, as they have only 23 stolen bases this season, 12th in the conference. Eleven of those are by Freshman Jin Sileo (.275 average). They have only stolen 11 bases in ACC play compared to 40 for the Hokies.

It’s in the circle that the Yellow Jackets really struggle. Georgia Tech has a team ERA of 5.18, and the staff averages only 4.6 strikeouts per 7 innings. Both of those numbers rank near the bottom of the ACC.

Redshirt Junior Madison McPherson, who had pitched a grand total of 21 innings in her three prior seasons, leads the Jackets in starts (13), innings pitched (70.2) and ERA (4.46). Freshman Blake Neleman has started 10 games (5.00 ERA) and leads the team in strikeouts with 53. She was the starting and winning pitcher in the two Jackets’ two wins last weekend versus Louisville.

It’s been ten days since we last saw the Hokies in action, and I’m sure the team is anxious to hit the field.

The Hokies, once hitting at a .328 pace as a team heading into Louisville, now have an average 20 points lower (.307 team), although that still leads the ACC. But Coach D’Amour has seen some recent positives. “I’ve been very encouraged with our offense the last week,” he said. “We’re starting to swing the bats like we’re capable of swinging them. Hopefully we’ll see that translate into the games this weekend.”

In the circle, the Hokies are continuing to be spoiled by Junior Keely Rochard (ERA 1.05), who is tied for NCAA lead in shutouts with 10 and second in strikeouts with 197.

On paper, this looks like a bit of a mismatch. The teams appear to be similar in hitting numbers, but the Hokies have a big advantage in the circle. But games are not played on paper, so the Hokies will need to show up focused as they prepare for their late season push.

The forecast calls for mid to upper 50s all weekend so it should be good softball weather. 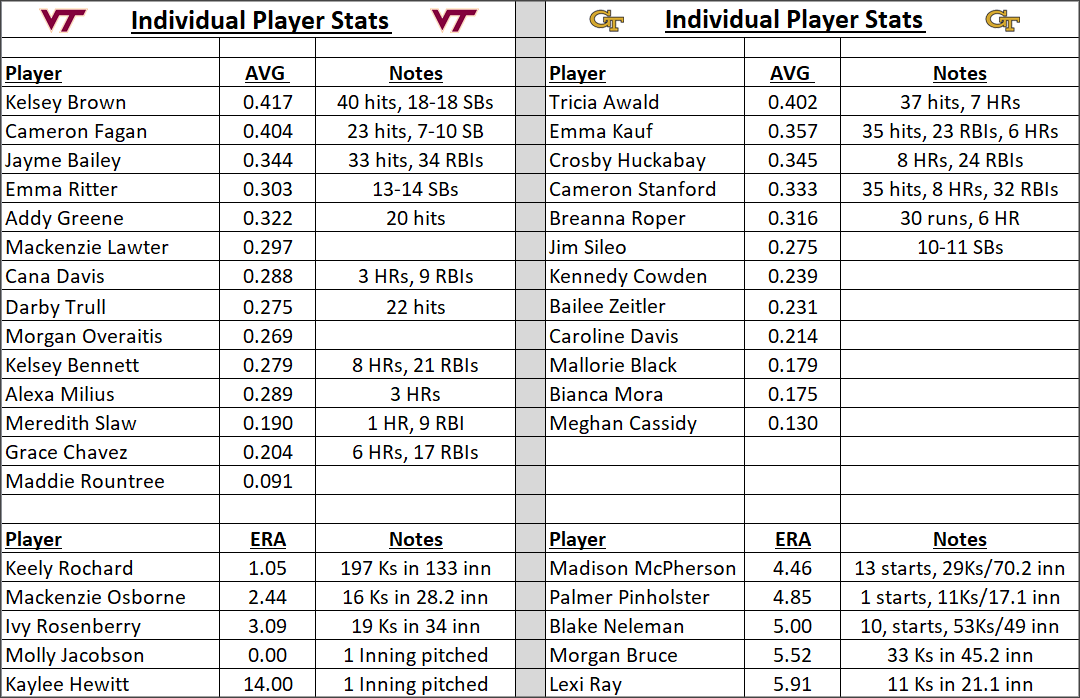 Our auction is now live!