“We went into Durham this weekend and took 3-of-4 against the seventh-best RPI team in the country,” Coach Pete D’Amour said. “We’re disappointed that we didn’t take the fourth game, which speaks to the expectations we have of ourselves. Overall, it was a good weekend for us.”

The series started with a Friday night dual between two of the ACC’s strikeout leaders – the Hokies’ Keely Rochard and the Blue Devils’ Peyton St. George. The Hokies got RBIs from four different players and Rochard limited Duke to one run while striking out seven.

On Saturday, the Hokies swept the doubleheader from Duke as Rochard combined with freshmen pitchers Mackenzie Osborne and Ivy Rosenberry to limit the Blue Devils to a total of five runs in 15 innings, while the Hokies crossed the plate 11 times in the two games. The second Saturday game had great eighth inning fireworks as freshman Emma Ritter blasted a two-run home run and Rosenberry made it stand up in the bottom of the inning.  Although this Hokie team typically takes a “business-like” approach, excitement erupted in the eighth inning.

That set up Sunday’s finale with Hokie fans energized about the possibility of a series sweep.  However, it was not meant to be.  Rochard limited the Blue Devils to just three hits, but a couple of defensive miscues on Duke baserunners allowed the Blue Devils to plate three runs. The Hokies registered eight hits, but also left eight runners on base.

Rest assured that Coach D’Amour made a few entries on his famous note card.

“We had chances to win (Sunday) but couldn’t overcome some mental mistakes,” he said. “Those mistakes fall squarely on me, and we’ll address them.”

Nevertheless, there were plenty of positives for the Hokies to take from the weekend:

Although he certainly wanted the series sweep, D’Amour wasn’t critical of his team.

“Our pitching was lights out all weekend,” he said. “Keely was Keely and Ivy and Ozzy threw a great game (Saturday).  We hit the ball well all weekend and played above average defense. Once again, our ladies played hard, I don’t have a ton of negative things to say about our performance.”

The Hokies now return to Tech Softball Park for an 11-game home stand, starting with a Wednesday doubleheader against Longwood. Game times are set for 4:00 and 6:00 pm and the games are scheduled to be shown on ACCNX.

Here are the current ACC Standings: 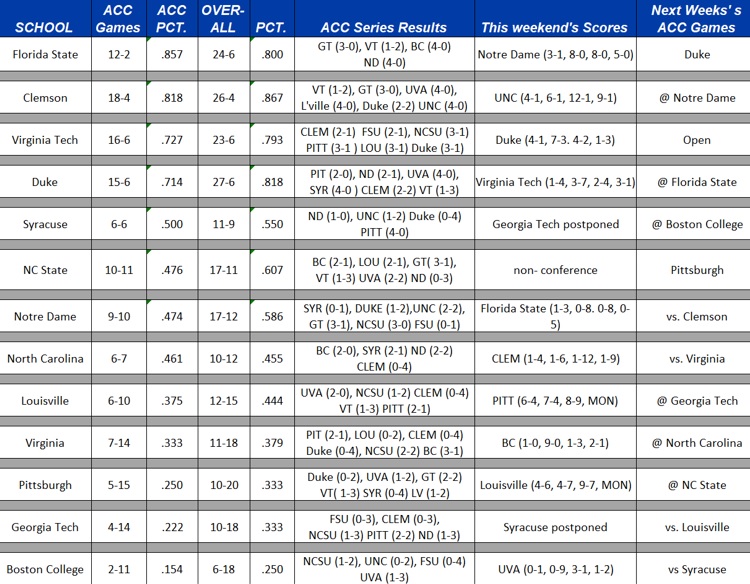