The #19/#16 ranked Virginia Tech softball team travels to Durham this weekend to take on the #12/#14 ranked Duke Blue Devils in a huge conference matchup. Duke is currently leading the ACC with a 14-3 conference mark (26-3 overall) and the Hokies are not far behind with a 13-5 record (20-5 overall).

The series kicks off Friday at 5:00pm, followed by a Saturday doubleheader at 5:00pm and 7:00pm, and concludes with a Sunday game at 3:00. Here’s the broadcast information:

A Look at Duke

Duke has made tremendous strides in just four seasons of playing softball. They went 29-27 in their inaugural year (2018) only to fall to 25-31 in year two. Last season, they were off to a blazing 23-4 start before Covid shut down the sports world. The Blue Devils are coached by Marissa Young, a former All-American pitcher at Michigan who took the Duke job after being an assistant at North Carolina and Eastern Michigan.

The last time Duke and VT met (2019), the Hokies swept the 3 game series in Durham (3-0, 6-0, 2-1) that included a four-hit shutout by the Hokies’ Keely Rochard. However, the previous year, Duke won two out of three in Blacksburg, including a 5-1 win over Rochard, who was a freshman that season getting her 10th career start.

This season, the Blue Devils have non-conference wins over SEC powers LSU and South Carolina, and ACC series wins over Pittsburgh (2-1), UVA (4-0) Notre Dame (2-1), Syracuse (4-0), and a split with Clemson (2-2). They put together a 20-game winning streak which was snapped last weekend by the Tigers, a series in which the Blue Devils struggled at the plate. Clemson limited Duke to just eight runs in four games, as the Blue Devils were only able to hit 3 for 36 with runners in scoring position.

As shown by this Tale of the Tape, Virginia Tech and Duke are very closely matched in runs, opponent runs allowed, ERA, stolen bases, opponent’s batting average, and fielding percentage. On paper, the Hokies seem to have an advantage in batting average (.315 versus .286), although that number has dropped a bit in the last week.

The strength of this Duke team is the depth of their pitching. The Blue Devils have a tremendous 1-2 punch in the circle with Junior Shelby Walters (10-1, 0.53 ERA) and Senior Peyton St. George (11-1, 1.34 ERA), both of whom have started 10 games this season and have 14 complete games between them. And that’s not counting Senior Brianna Butler, who led the ACC in ERA last season at 0.95. Butler has only thrown 29 innings this season, but Young expects her back this weekend.

At the plate, the Blue Devils have a number of upperclassmen leading the way.

Junior Deja Davis (.388) typically bats leadoff and has started over 100 games in her Duke career. She has a career batting average of .355 and has stolen 35 bases in her Blue Devil uniform although she only has seven this season.

Senior Jameson Kavel (.378) can be found anywhere in the batting order, even occasionally at the top of the order. She has started 166 of 167 games while at Duke and has a .309 career average.

Juniors Caroline Jacobsen (.286, 20 RBIs) and Kristina Foreman (.280, 22 RBIs) hold down the middle of the batting order and are tied for the team lead in homeruns with 5. Jacobsen has 110 career starts and has hit 20 career homeruns. Foreman has 90 career starts and 60 career RBIs.

The Blue Devils are also getting solid contributions from some youngsters. Sophomore Gisele Tapia (.313), and Freshmen Sarah Goddard (.353) and Francesca Frelick (.333) round out the Blue Devils that are hitting north of .300.

A Look at Virginia Tech

The Hokies will be looking for their 6th series win of the year. Virginia Tech has won three out of four games from Louisville, Pittsburgh, and NC State and two out of three from Clemson and Florida State.

Junior hurler Keely Rochard has simply been amazing in the last two weeks. In her last nine appearances, she has thrown 51 innings and struck out 102 batters with an ERA of 0.41. On Wednesday, she was named as the #2 Pitcher of the Month by Softball America.

There is a little concern about the pitching depth behind her, but Freshman Mackenzie Osborne had a solid outing last weekend in Louisville (5 innings, 1 run), and Freshman Ivy Rosenberry shut out Clemson earlier this season.

Hokie bats have cooled off a bit from their season high average of .328 a week ago, but there are still some dangerous hitters wearing orange and maroon. 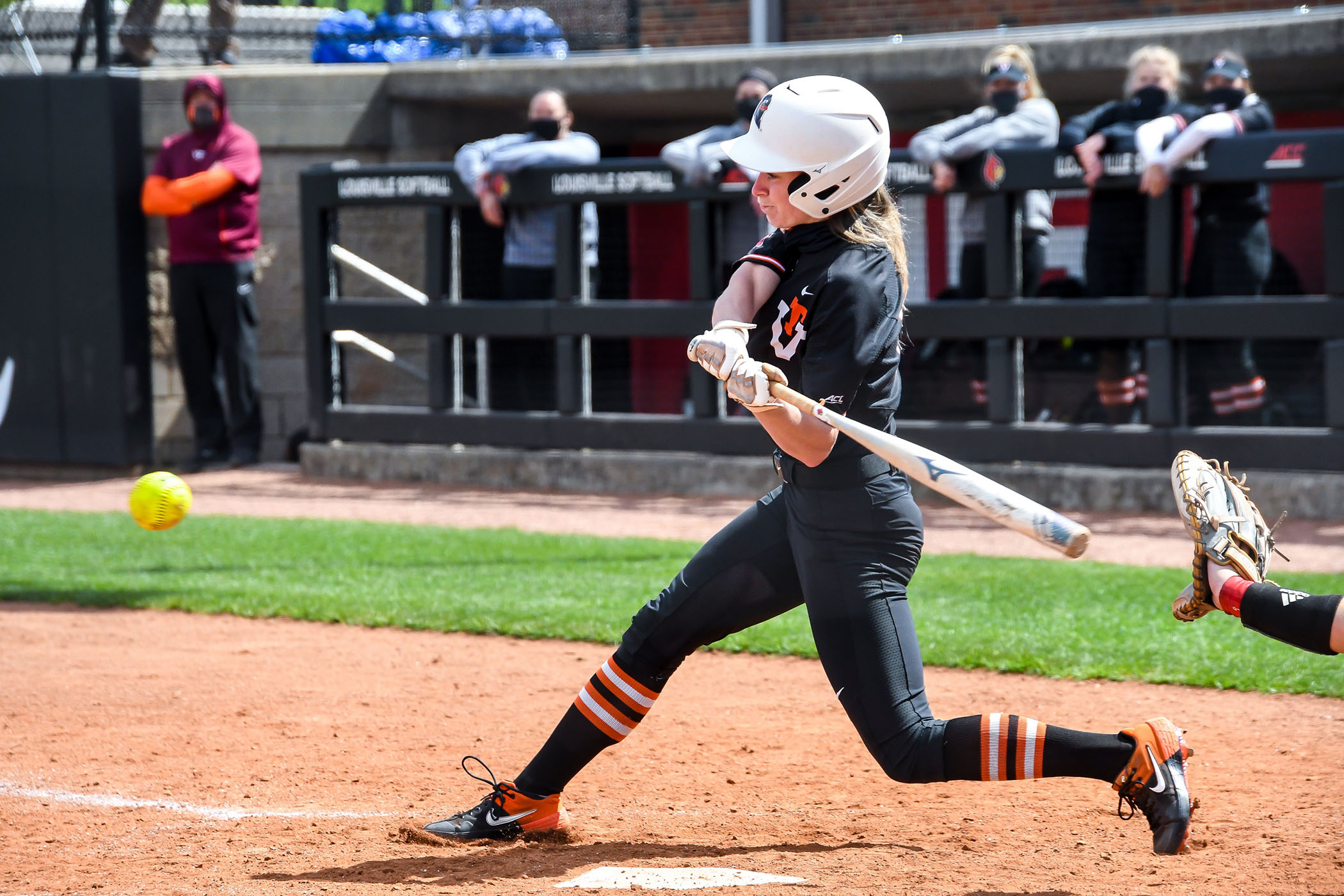 In her last ten games, Kelsey Brown is hitting .529 (18 for 34) with 11 runs scored and seven stolen bases. Freshman Emma Ritter is hitting .423 (11 for 26) during that same period with eight runs scored and eight stolen bases. Freshman Addy Greene has started the last four games and has hit .462 (6 for 13) with three doubles and four runs scored. And there are still Sophomores Jayme Bailey (.373 average) and Kelsey Bennett (.299) waiting in the lineup along with Junior Darby Trull (.308). No opponent wants to face any of them with the game on the line.

It should be one heck of a series this weekend in Durham, and it’s a shame that Duke is allowing ZERO fans to attend, including families. At first glance, the Hokies seem to have the stronger bats and the Blue Devils seem to have more depth in the circle. But the teams appear overall to be very evenly matched. The Massey ratings have the Hokies with a 51% chance of winning.

Virginia Tech Coach Pete D’Amour has studied the Blue Devils closely and sounds like he is looking forward to the matchup as well.

“Duke is as well rounded a team as we’ll have played this year,” says D’Amour. “They do everything well. (But) We’re not too shabby ourselves. This team is turning out to be one of the grittiest and most enjoyable teams I’ve ever been associated with. We’ll be ready to compete and play hard this weekend and we’ll see what happens.”

It should be a good one, and Hokie softball fans have been waiting for this one all season. 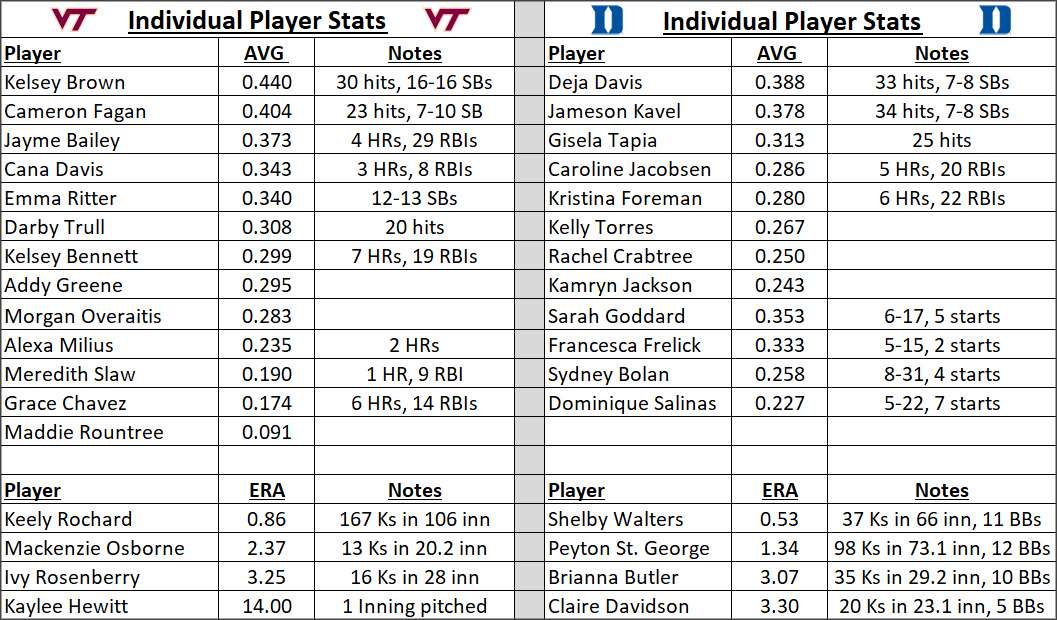