Led by another dominating pitching performance by junior Keely Rochard, the 16th/19th ranked Virginia Tech Hokies (19-5), 13-5 ACC) won three out of four games from the Louisville Cardinals this weekend.  It was the Hokies’ fifth ACC series win of the year, the best streak in the conference. The series was capped off by the Hokies’ 8-0 run-rule win on Sunday in the finale.

Rochard (15-2, 0.84 ERA) was simply amazing once again, pitching 20 of the 25 possible innings this weekend, and limiting the Cardinals to two runs and striking out 37.  In her three starts against Louisville, Rochard registered three complete game shutouts and struck out 34 batters in 19 innings.  Unfortunately, in her one relief appearance, Louisville’s Makayla Hurst hit a two-run home run in the bottom of the sixth that would prove to be the difference in Saturday’s 3-2 loss.

But as they had done after their previous four losses, the Hokies bounced back from the loss with a vengeance, run-ruling the Cardinals 8-0 in five innings on Sunday, which follows a familiar trend.  After each of the VT losses this season, the team has followed up with a dominating performance in the following game (Clemson 9-0, FSU 9-1, NC State 12-2, Pitt 5-0, and Louisville 8-0).

With the exception of a Cana Davis’ two-run homer and a Jayme Bailey solo blast on Sunday, the long ball was absent from the Hokies’ arsenal this weekend.  However, small ball was very much in play as six of the Hokies’ runs this series was directly or indirectly set up by sacrifice flies or bunts, such as this beauty by their second-leading home run hitter Grace Chavez.

This may be my favorite memory of this weekend in Louisville – @Graacechavez laying down the perfect squeeze bunt vs Louisville. ❤️https://t.co/nGSoad60od via @YouTube

“I expect our hitters to be well-rounded,” says Coach Pete D’Amour. “We always emphasize selflessness at bats that are for the good of the team. Cashing in on run-scoring opportunities doesn’t always mean getting hits in those opportunities. We didn’t execute a couple (more) bunts this weekend, which is on me, because we never practice them.”

At the plate, the Hokies were paced this weekend by speedsters Kelsey Brown and Emma Ritter.  In their last nine games (Pittsburgh, UVA, and Louisville), Brown has batted .500 (15-for-30) and Ritter has hit .435 (10-for-23). They have each also stolen seven bases during that span.

But the impact of the Hokies speed isn’t limited to stolen bases.  Time after time, the team’s aggressiveness on the base paths led to poor defensive decisions by the Cardinals, including nine errors by a team that came into the series second in the ACC in fielding percent.

“We have a lot of team speed,” said D’Amour. “That gives us a chance to manufacture runs when our bats aren’t ‘on’ so to speak.”

And it sounds like Hokie fans can expect to see more of this in the future.

“We’re going to face good pitching from here on out, so it’s not realistic to think we’re going to hit five home runs and score 10+ runs a game,” said D’Amour. “When our pitching is as good as it’s been, we need to take advantage of every opportunity we get offensively.”

Speaking (again) of pitching, in her last 45 innings of work, Rochard has struck out 91 batters.  But another exciting element from the weekend for Hokie fans was freshman Mackenzie Osborne throwing five solid innings this weekend, starting the second game of Saturday’s doubleheader, and only giving up one run and striking out three.

“She gave us a chance to win game three,” said D’Amour.

Defensively, the Hokies remain solid. Brown made a couple more highlight catches in left field, Alexa Milius threw out a runner trying to steal, and Darby Trull gunned out another base runner at the plate, her fourth of the season and third in the last two weeks.

The Hokies @darbytrull has thrown out three base runners from her center field spot in the last two weeks. What an arm! https://t.co/e0CSaobAzg via @YouTube

Next up for the Hokies is a Tuesday non-conference rematch with Virginia in Charlottesville and a huge series next weekend in Durham with the ACC-leading Duke Blue Devils. 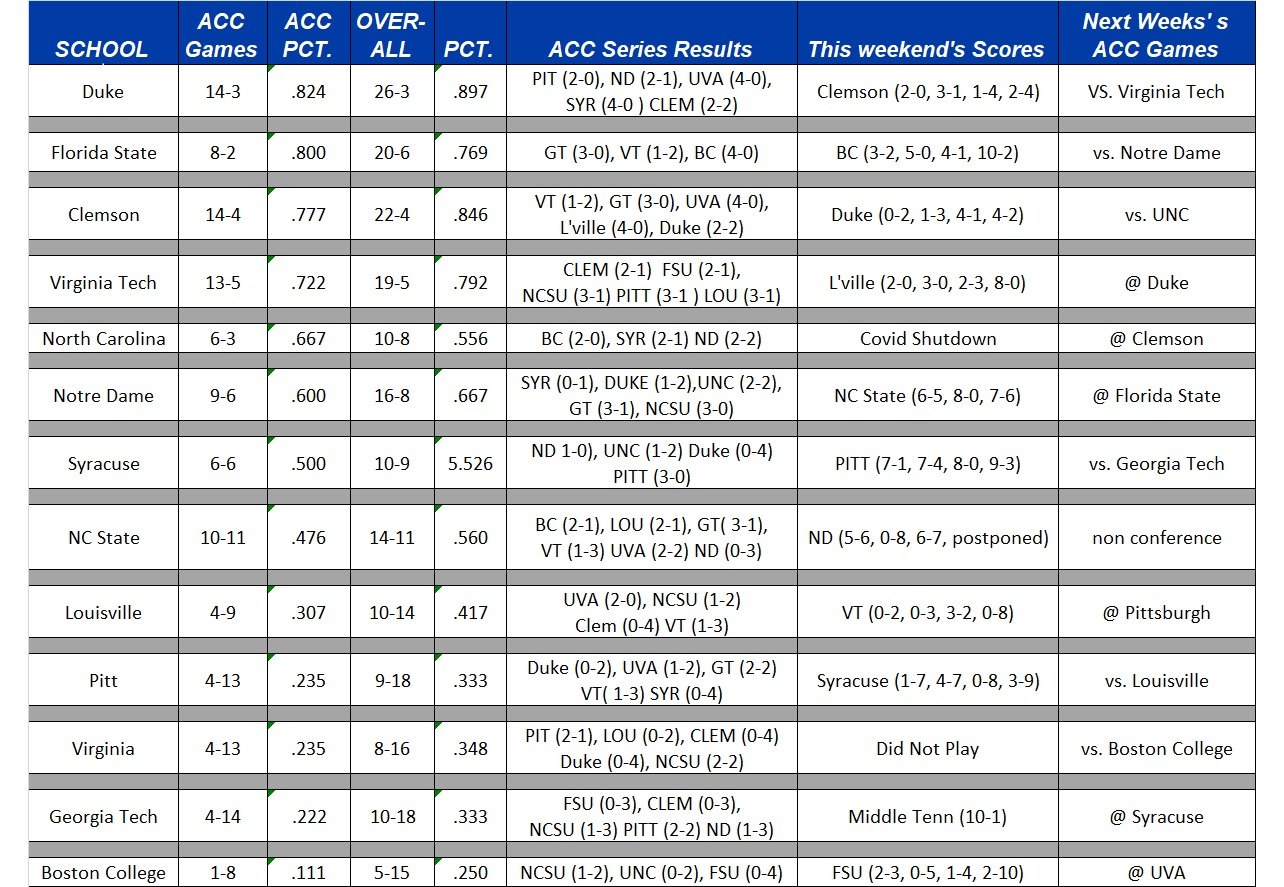