After a successful seven game home stand (6-1), in which they outscored their opponents 46-7, the 16th/19th ranked Virginia Tech Softball team (16-4, 10-4 ACC) will travel to Louisville this weekend to take on the Cardinals. The series kicks off Friday at 7:00pm, followed by a Saturday doubleheader at noon and 2:30, and concludes with a Sunday game at 1:00. All games are scheduled to be streamed on ACC Network Extra (ACCNX).

Louisville (9-11 overall, 3-6 ACC) was swept at home by Clemson last weekend by scores of 4-0 (11 innings), 2-1, 6-1 and 4-2. Those were the Cardinals’ first ACC games since the Pod Play weekend when the Cardinals swept two games from UVA while losing two out of three to NC State.

In non-conference play, the Cardinals have lost two games each to SEC powers Alabama and Florida. Because of a strong strength of schedule (RPI SOS #10), several good wins could put the Cardinals in the NCAA picture so there’s no doubt the Hokies will get their best shot as the Cards close out a 15 game home stand.

Offensively, the Cardinals have struggled. As mentioned above, they only scored four runs in four games against Clemson last weekend.  They rank 12th in the ACC in batting average (.229) and last in stolen bases (11-16). They have hit just 12 home runs this year and five of those have been hit by Redshirt Junior Taylor Roby.

Hokie Coach Pete D’Amour is quick to say that fans shouldn’t be fooled by the Cardinals’ statistics.  “Louisville is a solid team all around,” he said.  “Their RPI is fairly high which speaks to the depth of the ACC this year. As usual, our game plan won’t change based on what Louisville does. We need to continue to throw strikes and play solid defense and control the strike zone on offense. If we do those things, we’ll put ourselves in a position to be successful.”

Speaking of the Hokies, they are coming off a 3-1 series win over Pittsburgh, their 4th ACC series win of the season, followed by a 7-0 non-conference win over Virginia.  Keely Rochard has been remarkable during the past week, pitching a total of 25 innings, and giving up only four hits, no runs, and striking out 54.  She deservedly was named the National Pitcher of the week for her performance.

With a Saturday doubleheader as a mainstay of each ACC weekend, the Hokies still need to establish depth in the circle with Freshmen Ivy Rosenberry and Mackenzie Osborne.  “Both are 20 innings into their college careers,” D’Amour pointed out earlier this week. “I see some positives some days and I see that they’re freshmen others.  (But) they’re going to get their chances.”

Offensively, Virginia Tech opened and closed their home stand with solid hitting performances. The Hokies lead the ACC in batting average (.328) and slugging percentage (.568) and are second in runs/game (6.3) and home runs/game (1.45). However, in the last three games of the Pitt series, Hokie bats struggled, with the team only scoring a total of 10 runs in those three contests.  But they put seven runs on the board against UVA, so hopefully all the bugs are worked out.

Kelsey Brown has hit safely in the past 11 games and has hit .472 during that streak. She leads the team in both batting average (.421) and stolen bases (11).  On the topic of thefts, the Hokies have gotten more aggressive on the base paths recently, as they have stolen 27 bases in their last 11 games.

This is essentially the halfway point of the Hokies’ ACC season and they will be looking to win their 5th ACC series of the year.  With a visit to ACC-leading Duke on tap next weekend, it would be nice to have some orange and maroon momentum heading to Durham (after a Tuesday stop in Charlottesville for another out of conference game).

Speaking of Duke, they have a four-game series this weekend against Clemson, so something at the top of the ACC standings has got to give. Here’s a look at the ACC standings, per D1Softball.com: 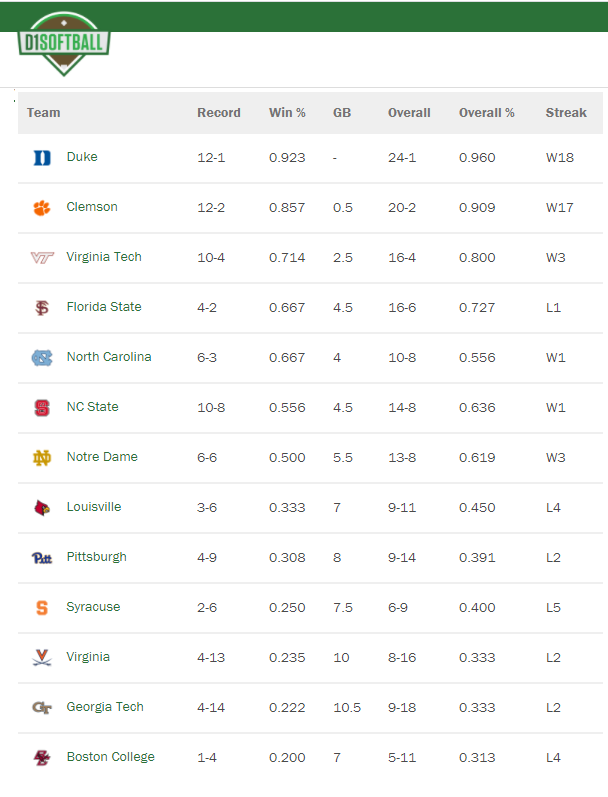 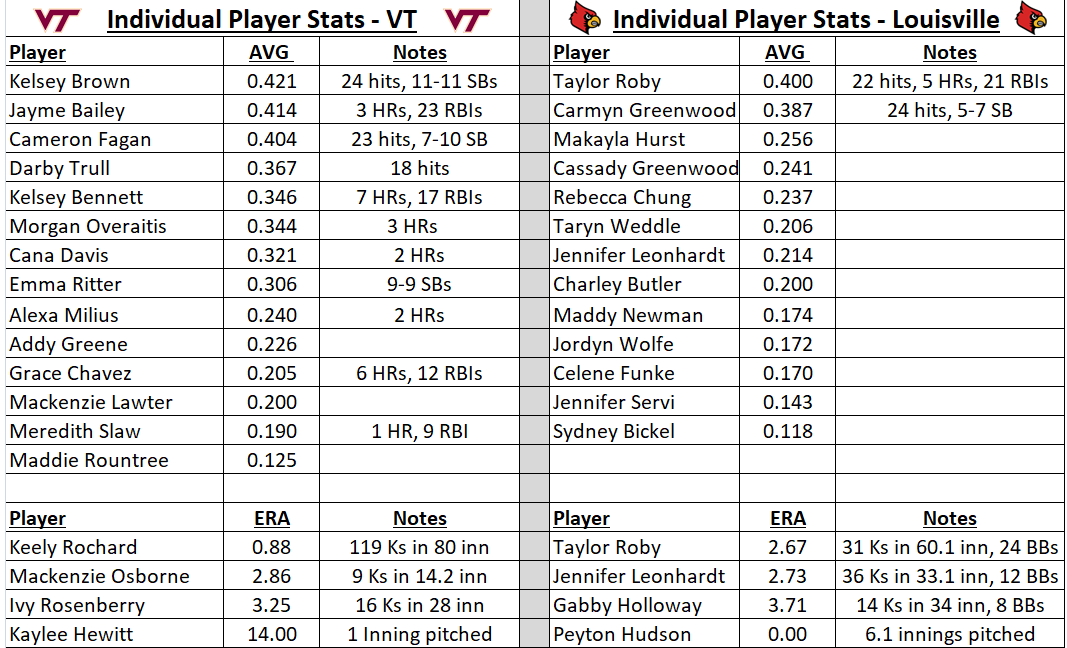