In an odd scheduling quirk, 16th/19th ranked Virginia Tech Softball (15-4, 10-4 ACC) will host the University of Virginia in a non-conference softball game Wednesday afternoon at 4:00 at Tech Softball Park.  The game is scheduled to be shown on the ACC Network and approximately 150 fans will be admitted on a first come-first serve basis.

Because of the number of ACC schools playing softball, each school “misses” two other schools in their scheduling rotation this year. In Tech’s case, it was UVA and North Carolina. But that wasn’t going to stop the schools from playing non-conference games.

“I know how much this series means to the state of Virginia,” says Coach Pete D’Amour.  “So it was important for us to play these games even though it doesn’t count for conference standings.”

The Hokies will make a trip to Charlottesville next Tuesday to complete the series.

Virginia comes to Blacksburg with an 8-15 overall record, 4-13 in the ACC.  They just finished splitting a series with NC State, winning two games 4-2 and 2-0, and dropping two games 6-4 and 5-0.  Earlier this year, they were swept by Louisville (two games), Duke (four games), and Clemson (four games) and won two out of three from Pittsburgh.  They have dropped non-conference games to Georgia and JMU and, according to NCAA RPI data, have played the nation’s fifth toughest schedule.

“Having just watched video, UVA has a good team this year,” says D’Amour. “They have a well rounded pitching staff and they put pressure on the defense offensively.”

Offensively, the Cavaliers are led by Sophomore Katie Goldberg (.329), one of the Top 100 prospects in 2019 by Extra Inning Softball, Junior Donna Friedman (.311), who provides a valuable veteran presence, and Freshman Abby Weaver (.333), daughter of TSL poster VT_AD (Congratulations!).

Pitching wise, Freshman Mikayla Houge (3.53 ERA) has been the workhorse, getting 9 starts and having pitched 41 innings. Molly Grube has gotten seven starts, but hasn’t been quite as effective. The Hoos have seven pitchers who have seen time in the circle and only have two complete games by their starters.

Virginia Tech is coming off a 3-1 series win over Pittsburgh, their 4th ACC series win of the season.  The series included a remarkable performance by Keely Rochard, who pitched a total of 18 innings, gave up three hits, no runs, and struck out 46.  She deservedly was named the National Pitcher of the week for her performance.

Hitting-wise, the Hokies followed up a series-opening run-rule win over the Panthers with three mediocre hitting performances, scoring a total of 10 runs in their next three games.  However, they still lead the ACC in hitting with a .324 mark and average over six runs per game.  Coach D’Amour felt the hitters were letting their early at bats affect their subsequent plate appearances, so hopefully, the Hokies will get back on track Wednesday.

You will have to excuse the Wahoos if they hope D’Amour gives one of his freshmen hurlers the ball Wednesday afternoon, as Rochard has been lights out against them in her previous appearances.  In her four previous starts against UVA, Rochard has thrown four complete game shutouts, has allowed only five total hits, and has struck out 36 in 28 innings.  In the series finale last year in Charlottesville, Rochard threw a no-hitter and was an error away from a perfect game (Note: it was her own error).

The Hokies have won the last ten games in the series, including the last six by shutout and 15 of the last 16.  The Hokie faithful will be hoping that trend continues. 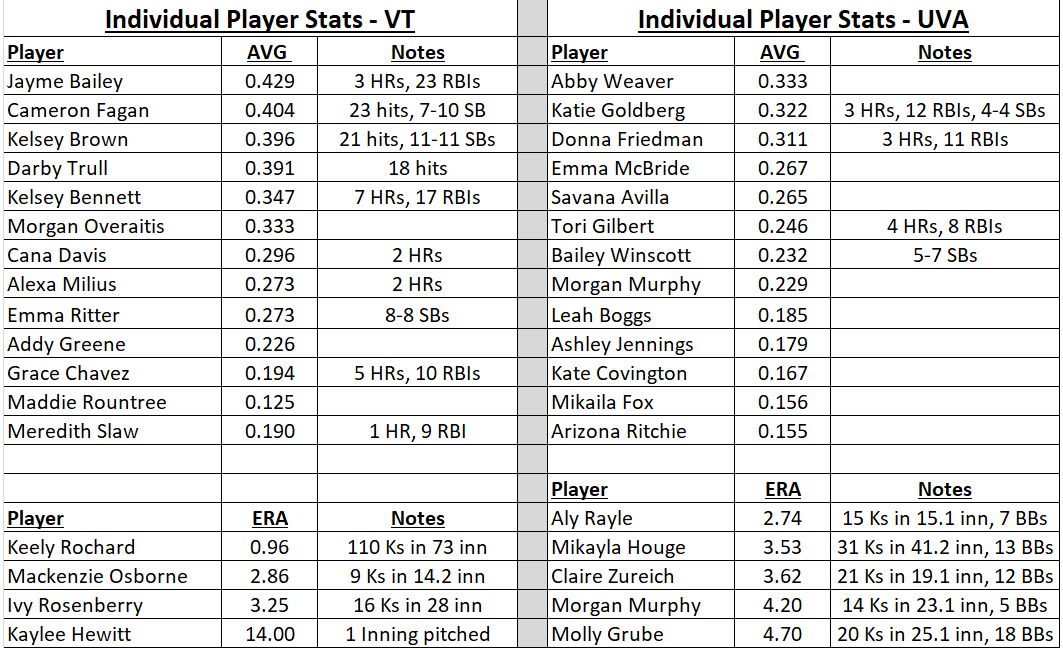