Riding a four-game winning streak where they have been simply blasting the ball, the 18/16th ranked Virginia Tech softball team (12-3, 7-3 ACC) will continue their home stand this weekend with a four-game ACC series with the Pittsburgh Panthers (8-11, 3-6 ACC).

Friday’s game will begin at 6:00pm, followed by a Saturday doubleheader at 1:00pm and 3:00pm, and conclude with a Sunday game at noon.  All games are scheduled to be shown on ACCNX. As was the case with the Radford games, approximately 150 fans will be admitted on a first come-first serve basis.

That what happens when your hitters start seeing pitches the size of basketballs. Since the third game of the Wolfpack series, Virginia Tech batters have batted .459 (50 for 109) as a team with half of those hits going for extra bases (17 doubles, 1 triple, and 17 home runs).  That has resulted in 49 runs scored in those four games – all ending as run-rule wins for the Hokies.

The Hokie pitching staff has held their own as well, with a team ERA of 2.01. Preseason All-American Keely Rochard leads the team with a 1.27 ERA, and 64 strikeouts in 55 innings.  Freshmen Ivy Rosenberry and Mackenzie Osborne got well deserved starts against Radford on Wednesday and both responded with complete game wins. That experience will be invaluable down the road and perhaps this weekend.

A Look at Pittsburgh

The Panthers, who have played all their games on the road, have struggled this year in ACC play, losing series with Duke (0-2) and UVA (1-2) before splitting with Georgia Tech last weekend in Atlanta. The Panthers won their two games against the Yellow Jackets by scores of 6-1 and 9-8 while losing the other two games 11-10 and 11-4.

The Panther pitching staff has not been very effective this year, with an overall team ERA of 4.75. Part of the issue is throwing strikes – the pitching staff has issued 61 walks and hit 13 batters while only striking out 92.They have especially struggled in ACC games, ranking last in the conference with a team ERA of 7.13. Junior Abby Edwards (3.14 ERA) and Senior Brittany Knight (5.37 ERA) are most likely to get the starts against the Hokies.

Hitting-wise, the Panthers hit .264 as a team and average a little over one home run per game.  They are led in hitting by true freshman Cami Compson (.333), who has hit also 4 home runs.  Senior Morgan Batesole hits .322 and sophomore EC Taylor is batting .304.

Junior Katlyn Pavlick has had a red hot March, hitting a team-high .435 this month. She has reached base safely in 14 straight games and holds a team-high eight game hitting streak heading into this weekend.

Taylor leads the ACC in stolen bases with 17 and has been thrown out only once.  The rest of the Pittsburgh team only has 11 stolen bases.  The Panthers do not have much depth, as only 11 players have 10 or more at bats this year.  Fielding-wise, the Hokies also look stronger, having committed fewer errors and having turned more double plays.

As mentioned, the Hokies have won all three ACC series that they played this year and five in a row going back two years. That’s currently the longest active streak in the ACC.

The Hokies are hitting exceptionally well at the moment and it would be natural for them to be licking their chops after looking at the pitching numbers from Pittsburgh.  But Coach Pete D’Amour is quick to point out that the Panthers have played some good teams tough this year, so the Hokies will need to be focused and take nothing for granted.

The weather forecast calls for a beautiful weekend in Blacksburg – hopefully, it will be beautiful on the scoreboard as well. 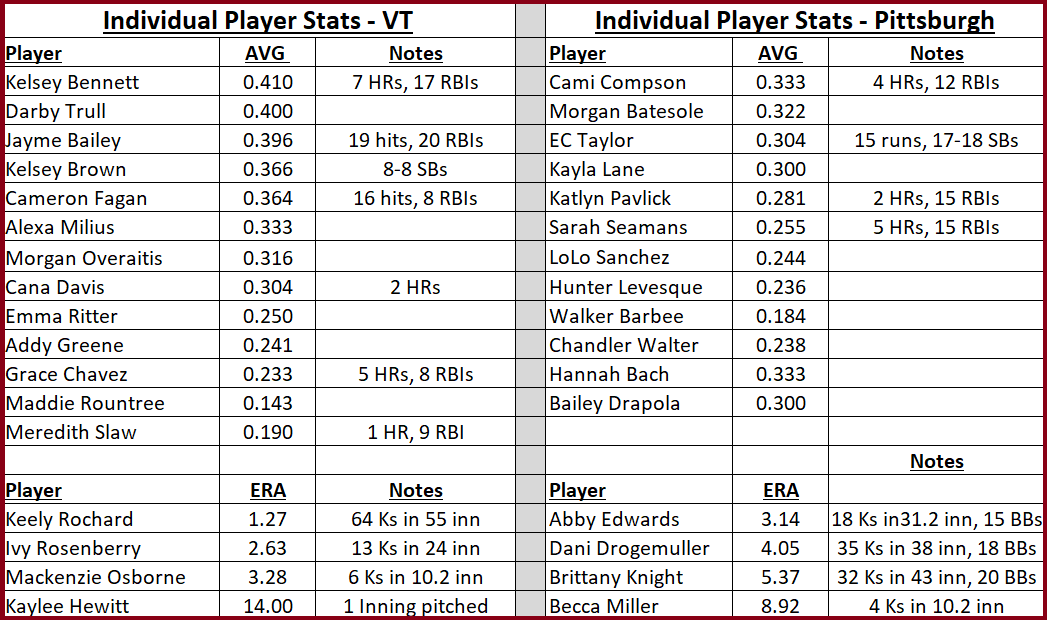