Returning to play after a 19-day Covid pause, the Virginia Tech softball team returned to action this weekend with a vengeance, taking three out of four games from NC State in Raleigh.  The wins move the Hokies to 10-3 on the season, 7-3 in the ACC, while State falls to 12-6 and 8-6. 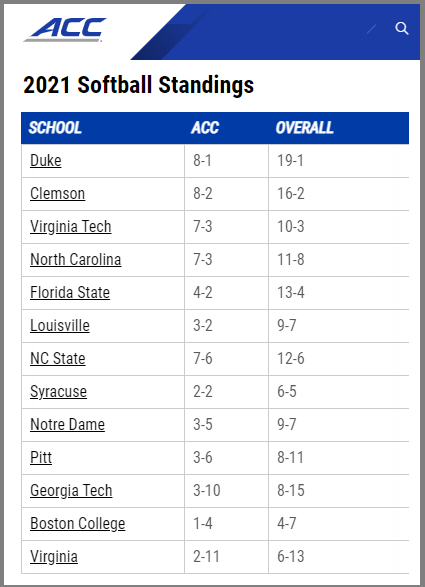 The Hokies racked up some crazy offensive numbers in the series as they hit .358 as a team and scored 33 runs on 38 hits, which included 9 home runs. The series finale on Sunday was a Hokie fan’s dream – a 17-4 run-rule win as the Hokies exploded with a school record 8 home runs, including 3 by sophomore Kelsey Bennett.

That ACC series win is the third of the season for the Hokies and their 5th in a row overall, making it the longest active streak in the conference. Virginia Tech broke NC State’s streak of five straight series wins.

“Coming out of Raleigh 3-1 is what I consider a good weekend,” said Coach Pete D’Amour. “NCSU is a solid team all around, so winning the series was a big deal. Of course everyone is going to talk about the offensive output this weekend. I’m really not shocked by it. This is one of the best offensive teams I’ve ever been around.”

Part of that offensive success is the discipline to hit strikes. Hokie batters only struck out 8 times in the 4 games while drawing 12 walks. ESPN commentator Amanda Scarborough noted, “The Hokies aren’t getting fooled by anything – location, speed, in/out of the zone.”

Offensively, there were numerous Hokie heroes.  Sophomore Kelsey Bennett had not been pleased with her hitting this year, so last week she asked Coach D’Amour for some extra hitting sessions.  Whatever they did needs to be quickly patented as Bennett hit .545 for the series (6 for 11) with four home runs and nine runs batted in. Her three home runs on Sunday set a Virginia Tech record for most HRs in a game.

Jayme Bailey had a great series as well, hitting .500 (6 for 12) with a home run and 6 RBIs. The list continues with Darby Trull (.455), Kelsey Brown (.357), and Cameron Fagan (.308) all having great weekends.  The series also featured several firsts for the Hokies as Fagan, Morgan Overaitis, and Alexa Milius all recorded their first Hokie career home runs. Milius’ dinger was a grand slam. And Cana Davis showed she is all the way back from her injuries by blasting her first homer of the year (the second of her career).

This article is sponsored by Anytime Fitness and their Blacksburg location. Yes, TSL’ers, the gym that changed Chris Coleman into a workout warrior is now a Tech Sideline sponsor! Whatever your goal, you don’t have to do it alone. New members receive a fitness consultation with a coach and a 30-day workout plan!

Give them a call. If it’s during regular business hours, ask for Tyler, and BE SURE TO TELL THEM TECH SIDELINE SENT YOU!!

That depth enables Coach D’Amour to tweak the lineup as needed.  After the Hokies lost the first game of the doubleheader on Saturday, he inserted three different starters in Saturday’s second game.  “I decided to shift the lineup around Saturday, said D’Amour. “I just wanted to see what other kids could do. Alexa, Morgan, and Cana gave us competitive at bats with the opportunities they were given. I haven’t lost any confidence in the other players. If anything, we proved that we have a very deep roster.”

Compare that for a moment with the Wolfpack. In the four-game series, NC State made just one lineup change and used one pinch hitter (who ended up starting Sunday). That’s a stark contrast, especially when your 7-8-9 hitters are a combined 3 for 26 in the series (.115 batting average).

Speaking of Saturday, the Hokies’ resilience is amazing. In February, the Hokies lost to Clemson 8-1 only to bounce back the next game with a 9-0 run-rule win.  Against Florida State, they lost 7-1 in the first game of a doubleheader only to run-rule the Noles 9-1 in the second game.  And Saturday, the Pack got them 8-0 in Game 1, before the Hokies run-ruled them 12-2 in Game 2.

When a team loses badly, it would be natural to worry about their confidence – especially with young players – but it doesn’t seem to bother this squad.

Defensively, the Hokies were stellar this weekend, only committing a single error over the four games.  And there were a number of highlight plays, including Darby Trull’s frozen rope to throw out a Pack runner at the plate on Saturday and this play from Overaitis on Sunday:

“Defensively, we did everything we needed to do,” said D’Amour. “Darby made some typical Darby plays in center, Bennett continued to be the best defensive third baseman in the league, and Morgan made some great plays at second…we’re a tough team when we play defense like that.”

Of course, Keely Rochard was stellar in the circle, recording three complete-game victories to move her record to 8-1 on the year.  She limited the high-powered Wolfpack offense to a total of eight runs in the three games she pitched, striking out 22 batters in 18 innings. Freshmen Ivy Rosenberry and Mackenzie Osborne struggled a bit in Saturdays’ first game, but they are young and still learning.

“Keely gave us a chance to win the games she pitched,” D’Amour said. “I think the layoff showed a little bit, as she wasn’t as sharp as she usually is. Ivy and Mac threw better than the score indicated. We have to remember, we’re just 13 games into our season.”

Considering the layoff, this was a huge series for the Hokies, and D’Amour is pleased with his team. But it’s an intangible that has him the most excited.

“I can’t overemphasize how important the enthusiasm on the bench was today,” D’Amour stated, “especially with Grace Chavez.  She came out of the game and I could tell she was disappointed in her performance, but she was still positive and vocal – cheering on her teammates as hard as anyone. Having a team full of selfless players is what coaches dream about, and I saw a lot of that this weekend. It was a team effort. Everyone contributed.”

That sounds like great news for the rest of the season, which will include home games this week for the first time in two years. A Wednesday doubleheader with Radford will get things started before the Pittsburgh Panthers come to town for a four game series next weekend.