25 years ago today, probably late at night, I finished assembling the inaugural version of “Will’s Hokie Sports Home Page,” uploaded it to my Internet Service Provider NRVNet, and quietly launched something that I never suspected would turn into my life’s work.

It began with the line, “Okay, I’m going to get the whining out of the way early.”

Yeah … 25 years later, the whining is still going on. It’s the Internet, you know. 😊

That first update on March 12th, 1996 ran under the headline “The Hokies Get Screwed….Again.” It was my half-baked rant about what I thought was an unfair seeding for Virginia Tech’s 1996 NCAA Tournament bid. The 16th-ranked Hokies were a dreaded 9-seed, with eventual national champion Kentucky lurking in the second round. It all seemed so familiar, so I went off for a while.

I won’t give you the full run-down of the rant, which can be seen here. LOL, the bottom item contains a typo: “Tech Licensing Directory Martha Giesen Hale.” First time I’ve noticed that in 25 years.

In March of 1996, I was a programmer just trying to figure out how the Internet thing worked, and my two hobbies were comic book collecting, which I gave up years ago, and Virginia Tech Athletics, which I haven’t given up. I decided to make my fledgling web programming effort about the Hokies, and 25 years and thousands of articles later, here we are.

Yes, that leaves a lot of blanks to fill in, but now is not the time. Maybe someday I’ll write a history of TechSideline.com, assuming my lame memory can recall enough to make it interesting.

From those humble beginnings, my personal web page grew. I don’t have a screen shot of the original format, nor do I have the original programming, which is a shame, but you’re not missing much. It wasn’t much to look at. It had a maroon background, white text, and some Hokie stone buttons on it. That’s all I remember.

That original project did include the salutation “Welcome to Hokie Central.” Sometime within a year of the launch, we adopted the motto “All Hokie, All the Time. Period” which still survives two and a half decades later, in the header of TechSideline.com:

On the one-year anniversary of my Hokie Sports Home Page, on March 12, 1997, I relaunched it under the domain name HokieCentral.com. I introduced “Hokie Central Membership,” where for contributions ranging from $5 to $75, I’d send you a piece of HC swag featuring the brand new HokieCentral.com logo designed by Hokie Matt. The swag could be anything from a bumper sticker ($5 donation) to a nice maroon jacket ($75 level). There were koozies, watches, golf shirts, T-shirts … I know a lot of you still have your HC goodies. You tell me about it all the time.

Good timing. Virginia Tech had a pretty good football season that fall, and I received many an email that simply asked, “What’s a Hokie?”

In November of 2000, with Virginia Tech Licensing threatening to sue web site owners with trademarked terms (like “Hokie”) in their domain name, we switched the name of the site to TechSideline.com, or TSL. Nothing ever came of those threats from Virginia Tech, but we got ourselves a new name anyway and kept on going. That whole story is an article for another day, but the punch line is that the name was thought up by a college friend who never even visits the site. He’s not much of a sports fan.

In the fall of 2000, we launched our first subscription product, the TSL Extra, which was a monthly PDF newsletter that cost $25 a year. A couple of years later, we went to a Rivals.com style of membership that included a steady trickle of daily subscriber articles, and to this day, the subscription model drives our business.

There’s a lot more I could fill in, but as I noted above, now is not the time or place.

Tech Sideline (and Hokie Central) Through the Years

I thought you’d enjoy a look at TSL and how it has changed through the years.

One thing I’ve done over the years is save screen grabs of the home page as it evolved. Sure, you can see this stuff at the Internet Wayback Machine, but it’s cool having my own copies. Here’s a look. Click any of the small images for a larger view, but beware, you may have to avert your eyes. Almost none of them are paragons of beautiful design.

They do contain interesting snapshots in time, though, as you can see by looking at the headlines, authors, subject matter, and the like. 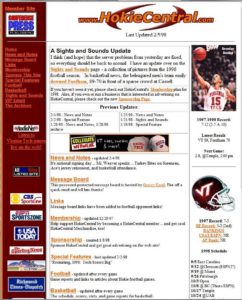 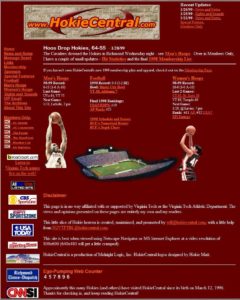 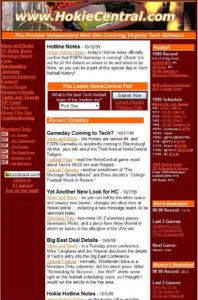 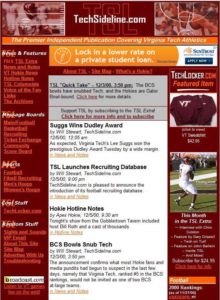 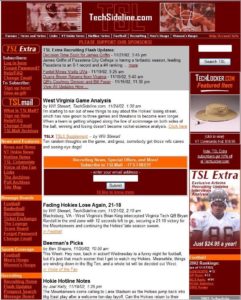 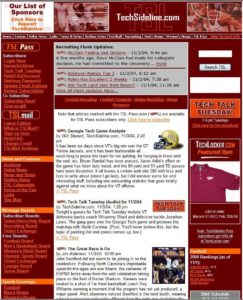 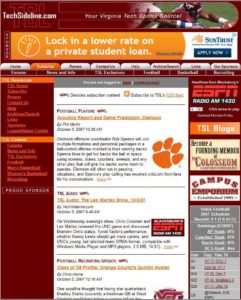 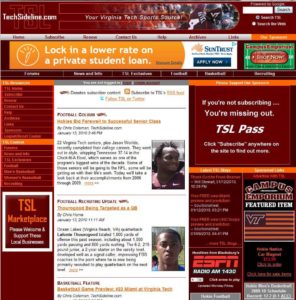 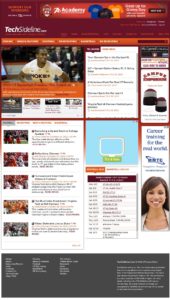 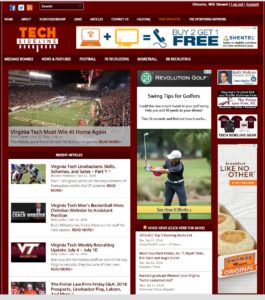 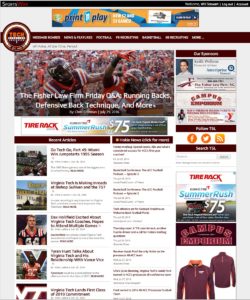 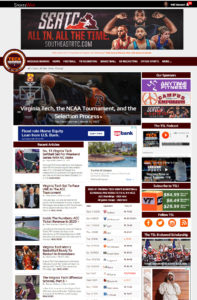 A Big Thank You

I do want to say one thing, though: Thanks.

When I first introduced the concept of Hokie Central Membership in March of 1997, my work had been free for a year, and I hadn’t asked for anything. But it was getting to be so much work that I felt I either had to quit or turn my passion into a side business. So I created HC Membership to bring in some revenue. Based on the feedback I’d been receiving from people, I thought it had potential.

I showed my ideas to a few people before launching, and I remember one of them saying, “Don’t be surprised if no one sends you anything.” No, that wasn’t my wife who said that. She has always been supportive.

Two days after launching, I went to the P.O. box I had set up for the business, and inside were six checks from the very first Hokie Central members, totaling $240. I wasn’t sure where all this was going, but I remember thinking that day that this might somehow turn into something I could do full time.

25 years after launch and 24 years after receiving those first checks, we owe everyone who supports us a big thank you. Steve Martin, in one of his 1970s stand-up routines, sang a goofy song that ended with the line, “But the most amazing thing to me is, I get paid for doing this.”

I know exactly what he means.

We don’t save lives. We don’t treat the sick. We don’t educate kids. We don’t feed anyone, make anything, or provide a vital service. We just try to inform and entertain. And for some reason, you have kept us in business for 25 years. We were even able to offer a young Virginia Tech History graduate, Chris Coleman, a full-time job in 2005, the first time that TSL went beyond supporting me and started to support other people.

To this day, we not only have two full-time employees, but we spend a ton of money on programming and hosting (thus supporting others), we pay out about $2,000 a month to freelance writers and photographers, and on and on. We have even endowed a scholarship in Bill Roth’s Sports Media and Analytics program at Tech that will help provide opportunities for future sports broadcasters and writers.

It’s hard to believe how big everything has gotten, and it’s all because of the generosity of you: our site visitors, our subscribers, our sponsors, and the Friends of TSL. So we thank you.

We have plans to make Tech Sideline even bigger, but again, that’s a conversation for another time. Till then, as I have said hundreds of times throughout the years as I closed emails … enjoy the site.