Coming off of a two-week plus Covid pause, the #16/#15 ranked Virginia Tech softball team (7-2, 4-2) heads to Raleigh this weekend for an important four-game series with the North Carolina State Wolfpack (11-3, 7-3).  The series kicks off Friday at 5:00, followed by a Saturday doubleheader at noon and 2:00, and concludes with a Sunday game at 2:00. Friday’s game, Sunday’s game, and the first Saturday game are all scheduled to be shown on the ACC Network, with the second game of Saturday’s doubleheader available on ACCNX.

“Our ladies are definitely looking forward to getting on the field again,” said Hokies Coach Pete D’Amour. “We left the FSU series in a good spot, and we were dealt the hand we were given. We’ve had a good day of practice. It will be interesting to see what our level of play will be this weekend.”

When we last saw these Hokies on February 21st, they had just completed a very successful ACC Pod venture, winning two out of three games against both Clemson and Florida State. Two of those four wins were run-rule conquests and the other two were Keely Rochard shutdown performances.

During the six games of Pod play, Hokie pitchers surrendered a grand total of nine earned runs, held the two opponents to a .179 batting average, and recorded 30 strikeouts in 37 innings. That was against two teams that are averaging over 5.5 runs per game this season against other opponents.

Hokie fans are also hoping that the pause didn’t cool the VT bats.  Kelsey Brown, Cameron Fagan, Jayme Bailey, and Darby Trull were all on fire during the Pod games, and Grace Chavez has now homered in four consecutive games.

Hokie pitchers, who have collectively given up just one homerun this season, will certainly be challenged by the Pack.  NC State leads the ACC in batting average (.304), home runs (25), and slugging percentage (.560).  NC State Coach Jennifer Patrick-Swift, who is in her third season with the Pack, has been very vocal about bringing a “home-run mindset,” to NC State. That approach has been very evident so far this season, with State averaging almost two dingers a game with 10 different players hitting HRs, led by Angie Rizzi, Sam Russ, and Randi Farricker with five each.

In batting average, State is led by senior Tatyana Forbes (.455), who is balancing her time between NC State and the Mexico Women’s National Team. Last year, Forbes led the Division 1 softball with 43 hits and ranked fifth in batting average (.538). Senior Angie Rizzi has started 200 games in her college career and is batting .421.  Along with her five home runs, she is 10-for-10 in stolen bases this season (she has 30 career stolen bases).  Junior Sam Russ is hitting .367 on the year and was on fire against Georgia Tech, going 8-of-15 with eight runs scored, five RBIs, six stolen bases and two-straight walk-off homeruns.  She was named the ACC Player of the Week for her efforts.

As a team, NC State has stolen 34 bases in 39 attempts, including 14 against Georgia Tech this past weekend, so they will run if given the opportunity.  Of course, they can’t run if they’re not on base.

In the circle, NC State is led by redshirt senior Abby Trahan, who D1 Softball named their D1 Softball Newcomer of the Year.  Trahan transferred from Southern Mississippi, where she led Conference USA in ERA in 2019. Trahan is 6-1 this season with an ERA of 2.36 and 34 strikeouts in 29.2 innings.

Carroll County sophomore Sydney Nester, who leads the Pack in innings, is 3-2 on the year with a 2.52 ERA and 51 strikeouts in 41.2 innings. Both pitchers have had periodic control issues as they have hit 10 batters and walked 37. They have also surrendered 12 home runs.

Here’s the Tale of the Tape for the two teams: 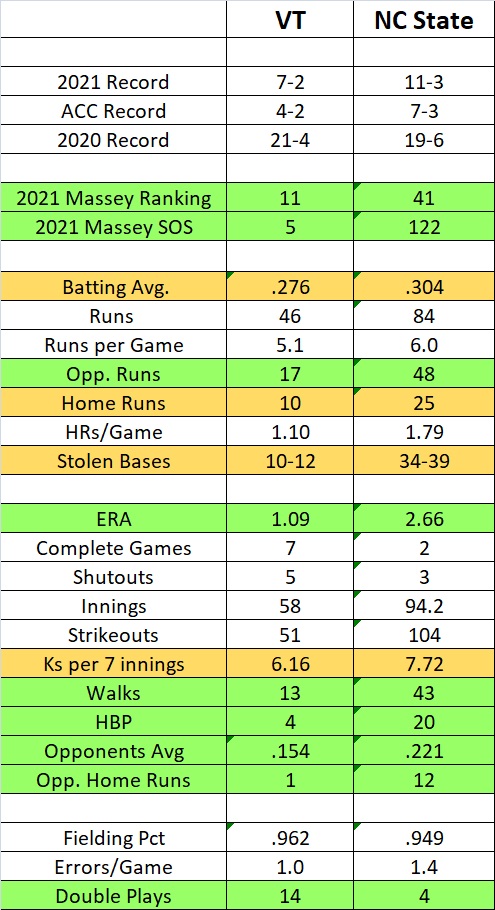 Wow, it seems like forever since we saw these Virginia Tech ladies on the diamond.  And in some ways, it has been.  After Pod Play, I was sky high on this bunch and really thought they might dominate the ACC.  That remains a real possibility, but this layoff is a real wild card.  We saw the Hokie men’s basketball team struggle big time after their shut down, so it’s natural to worry about softball.

If the season had continued uninterrupted, I would probably give State a slight edge in hitting and the Hokies an edge in pitching and defense.  BUT, the Covid layoff gives me pause (pun intended).

Still, the talent on this Virginia Tech team is off the chart. They are a VERY, VERY deep team, and that gives me some comfort.  That depth makes the team’s intersquad scrimmages very, very competitive – an advantage many teams do not have. I’m hoping that their practices this week have gotten them back up to speed.  After all, if you’re hitting against Keely Rochard in practice, you better get dialed in very quickly or she’ll make you look silly.

In the Hokies’ two losses this season, it was primarily the defense that let them down.  If they play solid defense, they will be very, very tough to beat – by anyone. I’m very confident in their hitting and pitching.  One other note – the outfield dimensions of the NC State stadium are less than Tech Softball Park, so don’t be surprised if a ball or two flies out.  Comebacks are very common there.

It’s supposed to be a beautiful weekend in Raleigh.  Let’s hope that beauty carries over to the scoreboard.